Rather than properly reimbursing a Qualified Medical Evaluator (QME) for a supplemental report, AIG seemingly used a profits-first calculus that takes into account the utter lack of consequences payers face when breaking the rules. Below, we document AIG’s victimization of a physician evaluator who did exactly what was requested of them.

Why do many payers simply deny a provider’s Second Review appeal for correct reimbursement? It makes logical sense to deny these appeals.

In May 2021, a party to an AIG liability dispute requested the QME to review 2,698 pages of records and issue a Supplemental Medical-Legal Evaluation report.

Effective April 1, 2021, the new MLFS directs payers to reimburse physician-evaluators $3 per page of records reviewed. Further, the new MLFS instructs that when a party sends records to the medical-legal evaluator for review, the sender of records must include an attestation confirming an accurate page count for the records:

Below is the request sent to the QME for the Supplemental Medical-Legal Report, and the required attestation specifying the number of pages sent for review as 2,698: 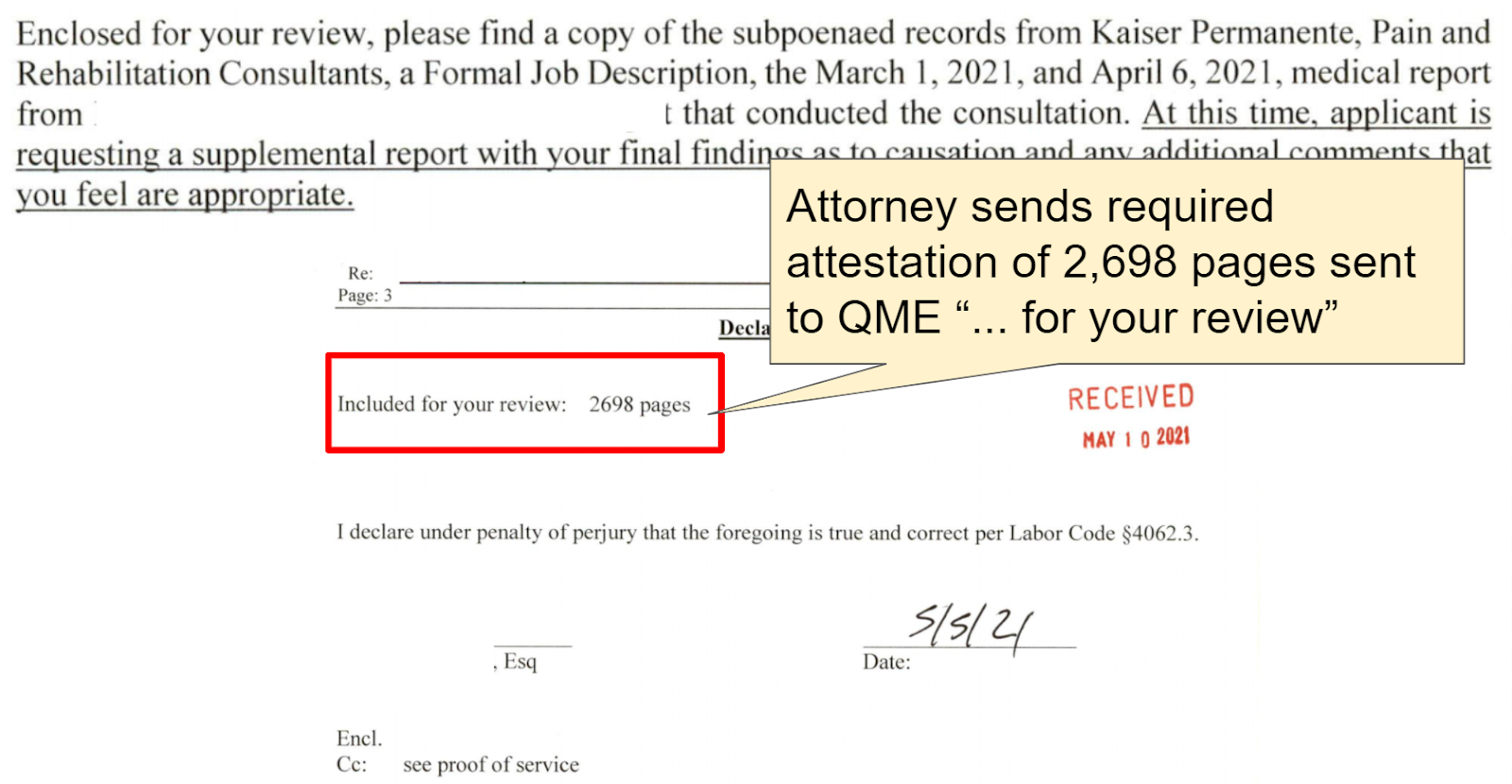 As requested, the QME reviewed the records and sent both parties a 70-page report. The physician submitted a bill to AIG for the evaluation report (code ML203) and and for the review of records (code MLPRR).

When reimbursing for a Supplemental Medical-Legal Evaluation, the new MLFS instructs that the reimbursement for ML203 includes 50 pages record review. Since the records sent for review exceed 50 pages, AIG owes the physician reimbursement of $3 for each additional page.

The total reimbursement for record review as billed is $7,944.00 But using their incorrect 265 page unit count to calculate reimbursement, AIG decided to allow the physician just $795 in reimbursement after reviewing 2,648 pages of records. The EOR neither acknowledges the reduction in pages, nor offers any explanation or reasoning. 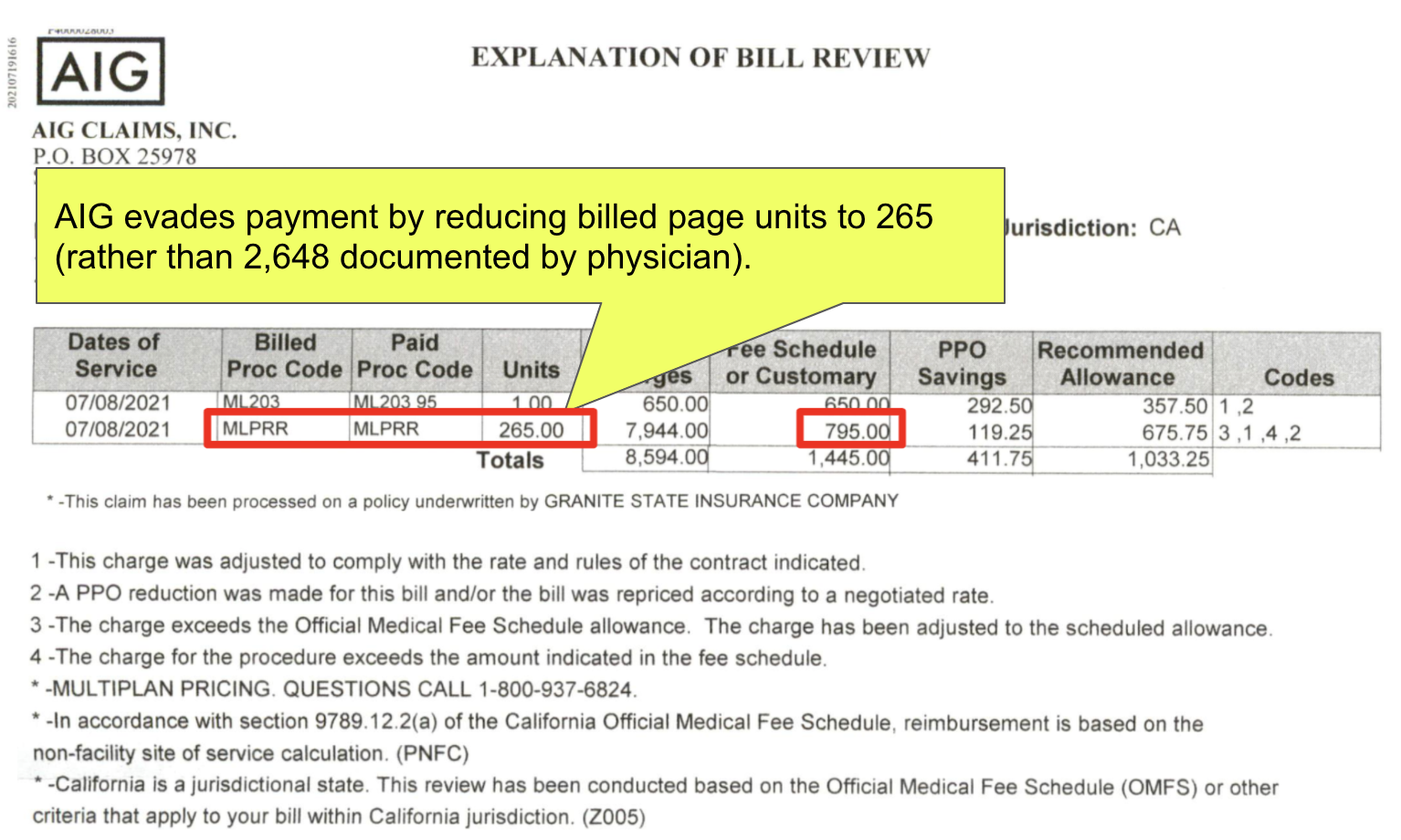 AIG improperly reduced reimbursement even further by applying a PPO reduction. As the EOR shows, AIG took an additional $411.75 MultiPlan PPO discount, including $292.50 off the primary billing code ML203, and $119.25 off the fraction of MLPRR units AIG elected to pay: 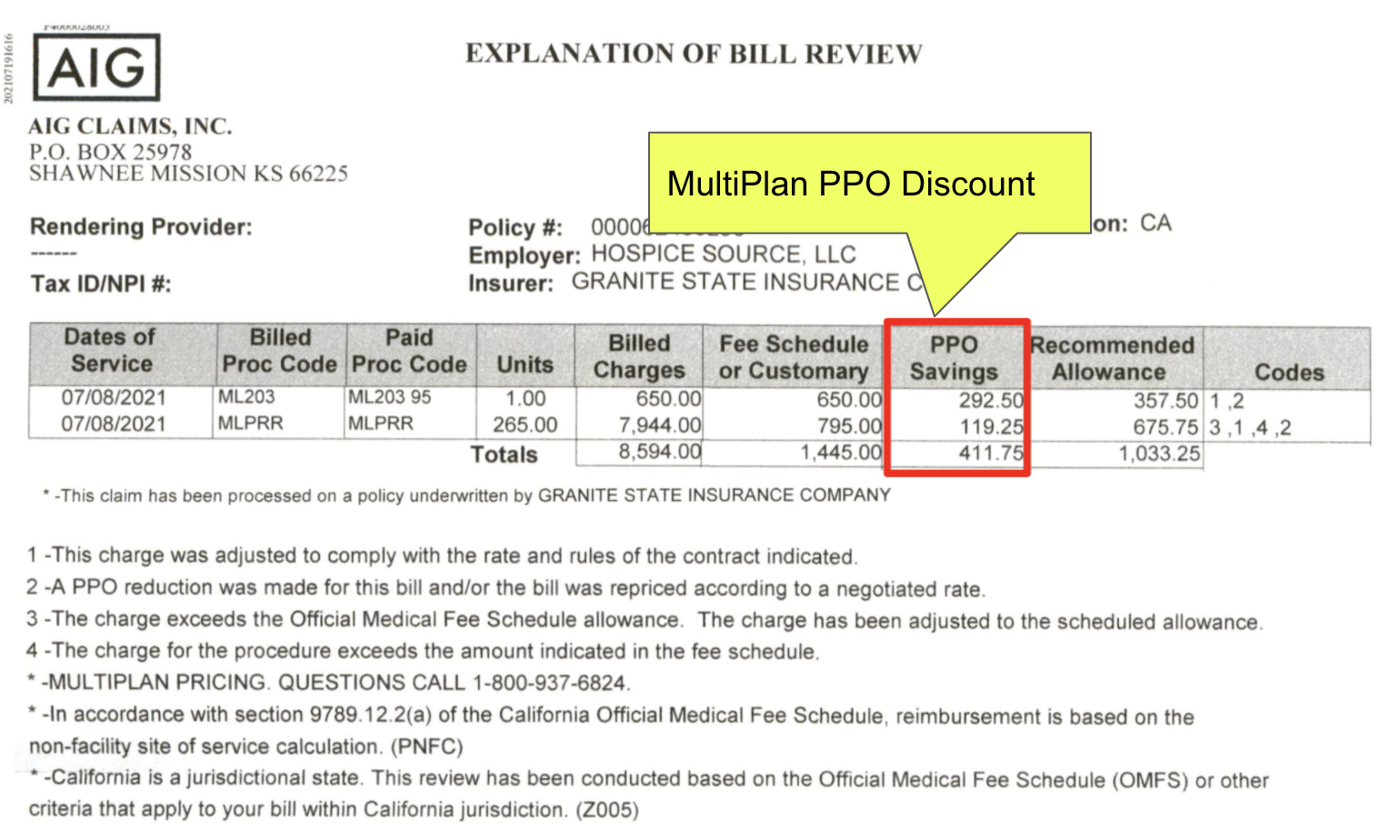 We’ve said it before (recently), and we’ll say it again: claims administrators may not apply PPO or other network discounts to bills for Medical-Legal services.

AIG may have missed this memo — along with the DWC Newsline and Independent Bill Review (IBR) decisions confirming the rule.

We can’t tell which is the insult and which is the injury — refusing to pay for the vast majority of services rendered, or slapping an inapplicable discount onto what remains. In total, AIG owes this QME $8,594.00, but has only paid $1,033.25. Without pursuing (and winning) the necessary appeals, the QME will lose $7,560.75.

In California, every workers’ comp payer is incentivized to ignore the state fee schedules.

When the provider fails to dispute improper reimbursements by submitting Second Review appeals and paying $180 to file for IBR, the payer simply keeps the provider’s revenue. In California, when providers err the consequences are automatic. When payers err, providers must expend time, effort, and resources to chase their payment down.

Fortunately, this provider is a client of DaisyCollect, our concierge billing service. On the provider’s behalf, DaisyCollect has already submitted a timely and compliant Second Review appeal for this travesty of an adjudication.

If necessary, we will appeal further — as should any physician in a similar situation.

Medical-Legal billing is a complex animal, rife with opportunities to lose revenue. Join us for our upcoming CA Med-Legal Billing Q&A webinar with DaisyBill co-founder Sarah Moray, and arm yourself with the insights and information you need to protect your practice.

Get the answers to all your Medical-Legal billing & payment questions. Sign up for Ask DaisyBill:CA Med-Legal Billing Q&A with Cofounder Sarah Moray. Register and submit your question(s) below:

There’s only one way to understand, navigate, and improve workers’ compensation: by the numbers.Since the introduction of the new Medical-Legal Fee Schedule (MLFS) in ...