In a recent article, AmTrust - IBR Hall of Shame, we described how AmTrust refuses to properly reimburse a provider, despite a Maximus Independent Bill Review (IBR) decision that overturned AmTrust’s original and improper reimbursement. Below we show the audit complaint that was filed with California’s Division of Workers’ Compensation (DWC) which explains the failure of AmTrust to compliantly adhere to California laws, regulations, and rules. Of course, the Audit Complaint makes no mention of common decency, which increasingly seems to have no place in AmDISTRUST workers’ compensation reimbursement.

An Audit Complaint is the single, free option available to providers to document and report the systemic inequity of California workers’ comp. With this post, we start publishing some of the many, many audit complaints filed against claims administrators by our users, redacted for privacy and anonymity of course.

Below is the Audit Complaint filed by the provider to document AmTrust noncompliance. 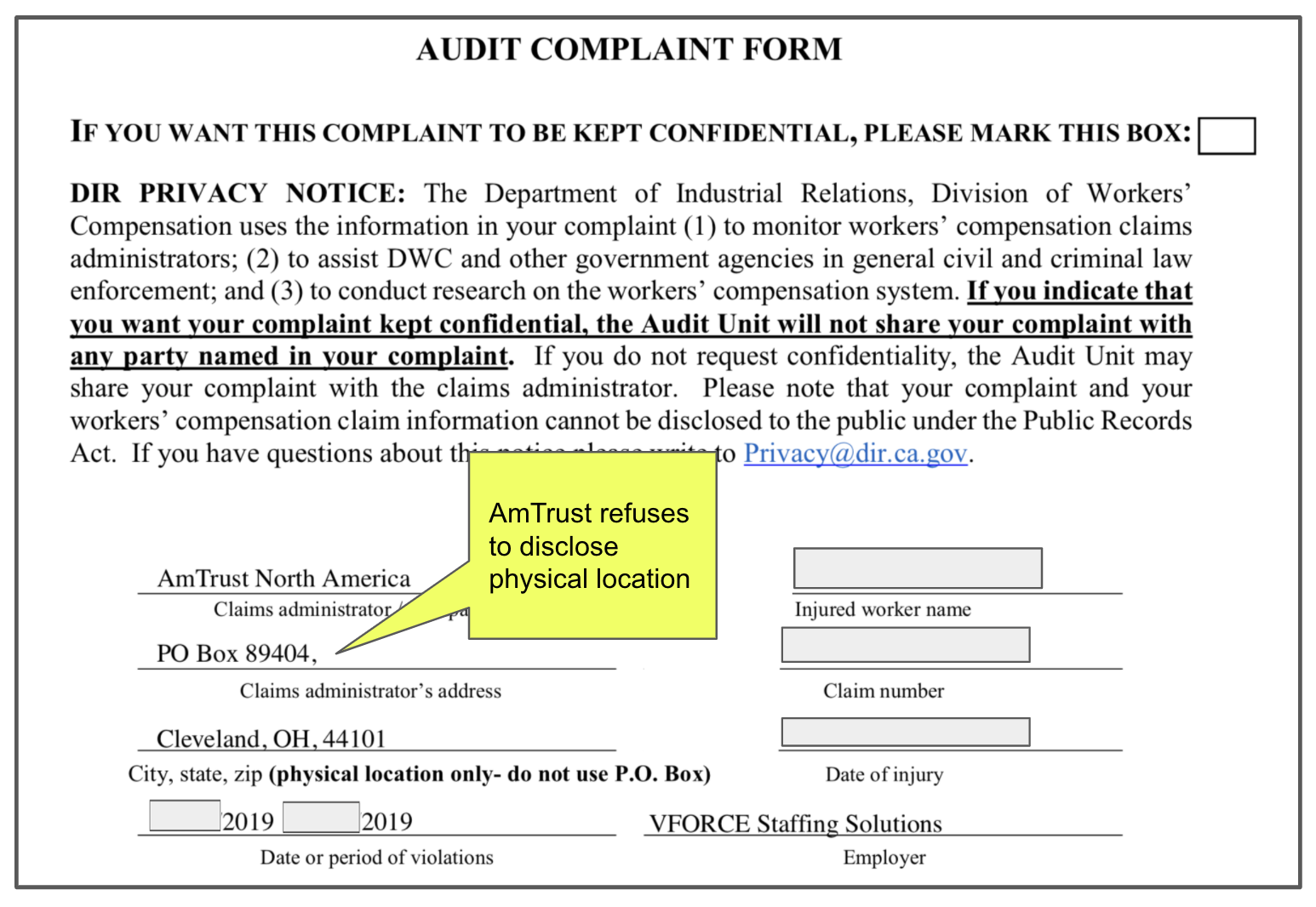 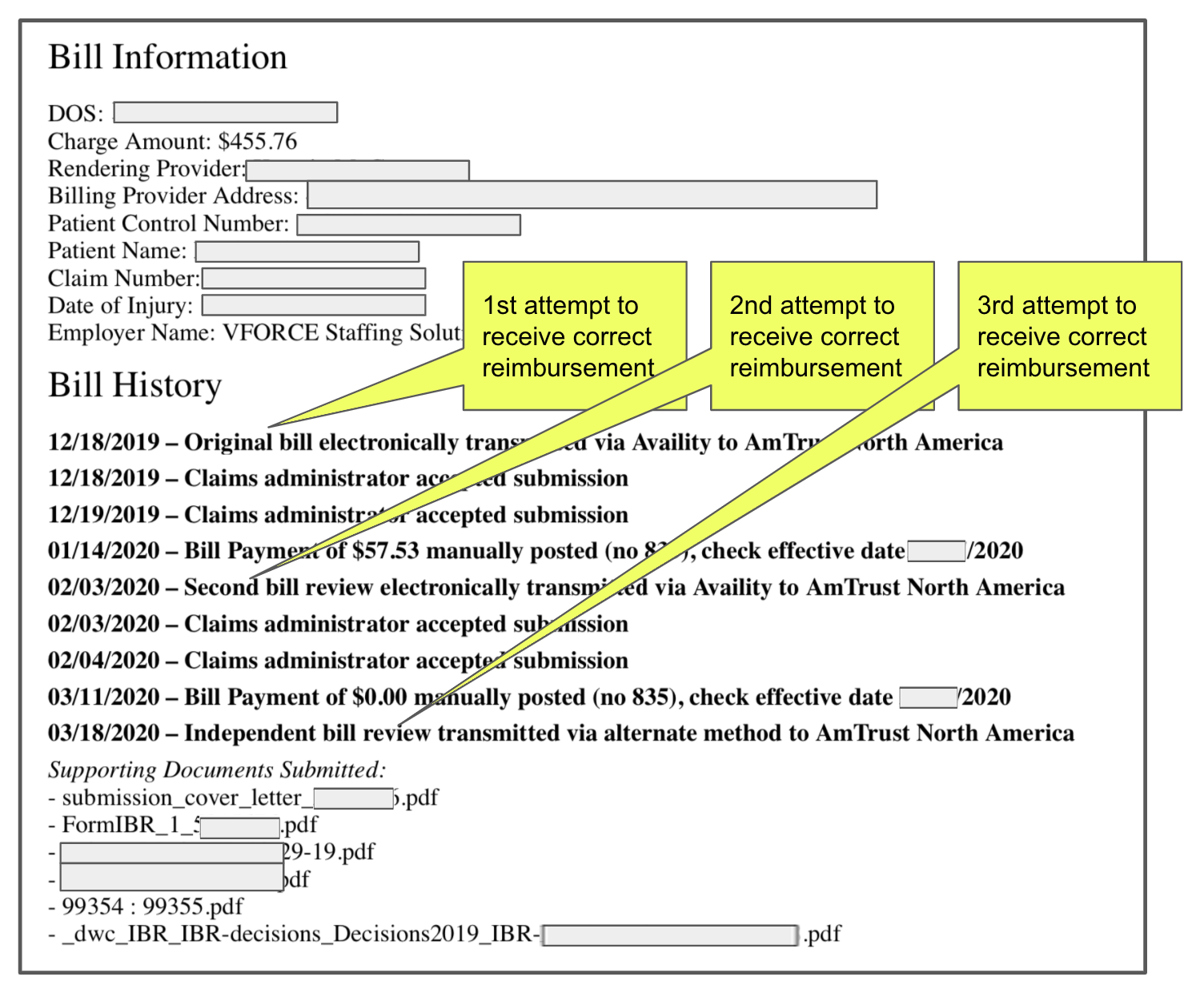 As a reminder, AmTrust has elected to implement its own version of California workers’ comp laws, rules and regulations. In this instance, the provider had requested and received authorization for the services that AmTrust subsequently denied. Per LAB §4603.2(e)(1) and 8 CCR §9792.5.5, the provider disputed the payment denial by timely filing a mandated Second Review appeal. In this appeal, the provider took pains to explain that the services were authorized and that therefore the correct reimbursement was owed.

In response to the Second review appeal, AmTrust seemed to have simply clicked the same “Deny” keyboard button, without addressing the provider’s reason for appeal, and once again turned down the provider’s request for correct reimbursement.

By denying the Second Review appeal, AmTrust forced the provider to expend even more resources to receive correct reimbursement. As mandated by California law, the provider’s next and only step was to file a 52-page IBR and pay $180 for Maximus to review the reimbursement dispute.

In its decision, Maximus agreed with the provider and ordered AmTrust to pay the correct reimbursement for the authorized treatment.

Despite the IBR decision, AmTrust continues to refuse to pay the provider. As documented previously, the provider’s representative sent fruitless emails and made multiple phone calls, pleading with AmTrust to pay the reimbursement as awarded by Maximus. AmTrust representative stated that California laws do not apply to AmTrust:

Spoke with adjuster RXXXX and they explained that they do not think the provider is on their MPN. According to the adjuster, AmTrust denies provider’s services and the IBR does not apply.

Now, to receive the amount awarded by Maximus, the provider must expend even more resources to hire legal representation to demand that AmTrust properly reimburse the provider for authorized treatment. Let’s quickly restate the steps taken by the provider so far:

Filing an Audit Complaint is the one free way that providers can fight back. For DaisyBillers, it’s super easy to file through DaisyBill; for non-DaisyBillers, watch this short webinar that explains the audit process -- but remember to use the Audit Complaint form that was updated in 2019.