To eliminate noise from the data and hone in on repeat offenders, we filtered out all claims administrators that received fewer than 499 total Second Reviews, as well as those who successfully accepted at least 90% of SBRs transmitted electronically.

What’s left is a roster of failure – a sort of Hall of Shame for electronic Second Reviews. In somewhat more festive terms, we made a list and we checked it twice. The resulting nine claims administrators find themselves distinctly on the naughty side.

Here’s a look at the naughty nine by the percentage of Second Reviews submitted electronically and by fax. 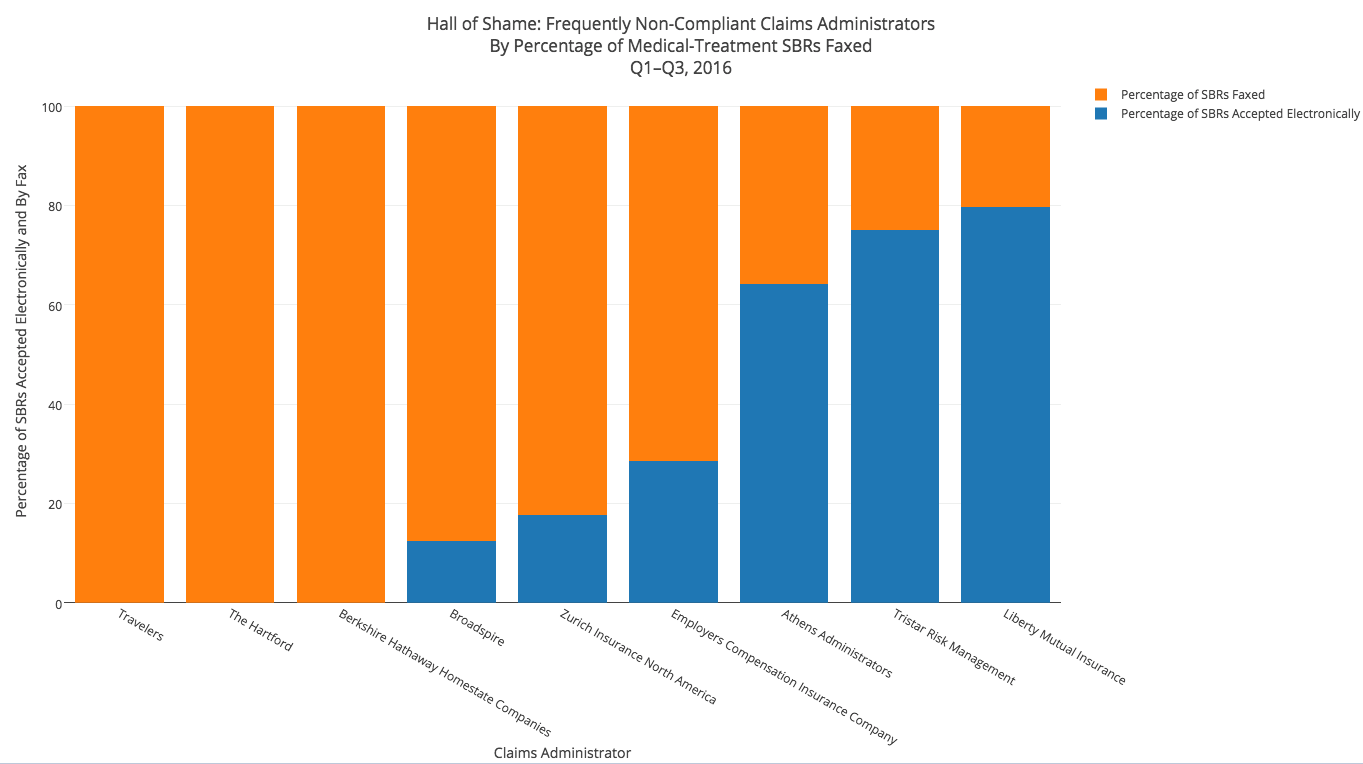 The more orange you see, the more a claims administrator relied on faxed Second Reviews. By this measure, Travelers, The Hartford, and Berkshire Hathaway form an embarrassing triumvirate of ineptitude, with none of the three accepting a single electronic medical treatment SBR. Meanwhile, Broadspire and Zurich barely missed earning such an ignominious distinction for themselves.

The table below shows that these are no small players – each of these claims administrators ranked among our top 20 by total volume of bill submissions.

If you use DaisyBill, we’ll make sure that your Second Reviews reach the claims administrator, even if we must take them to the post office ourselves. To date our clients have collected an additional $15,XXX,XXX in Second Review payments by appealing incorrect reimbursements. Second Reviews the only best way to make sure our clients receive the payment they are due for treatment and services provided on behalf of injured employees.

How can you combat this kind of disregard for California regulations? By all means, submit your bill for Independent Bill Review or file for a lien under the new lien claimant requirements of SB 1160.[a] But don’t stop there. We strongly encourage you to file an audit complaint, too. It’s the easiest way to send a message to claims administrators that we expect better. DaisyBillers can use the Bill History to keep tabs on bills submitted electronically and submitted by fax. From the same Bill History, you can quickly and easily create an Audit Complaint.

We encourage non-DaisyBillers to use the forms on the DWC Audit Unit Website to file an Audit Complaint. To make things easier, we provide an online library of suggested Audit Complaint language. The DWC may even intervene on your behalf and correct the non-compliant behavior.

For a detailed review of Audit Complaints, watch our webinar.

If you work for a claims administrator that struggles to accept electronic billing for workers’ comp, please contact us. We’d love to help.

To learn more about Second Bill Reviews for workers’ comp, check out our webinar library or click the button below.

[a]this isn't really a solution to this problem

There was a time when electronic billing was the future of workers’ comp revenue management. COVID-19 accelerated that transition, making e-billing an immediate necessity.

California workers’ comp providers face an inexcusable amount of hassle, red tape, and outright abuse in the struggle to collect correct reimbursement. Take it from us...