You win some, you lose some.

SCIF played the early rounds well, displaying the sheer hubris necessary to deny payment based on “missing documentation” — despite all relevant documents being included with the original bill. True to form, SCIF subsequently denied the doctor’s Second Review appeal on the same (invalid) grounds.

But when DaisyBill requested Independent Bill Review (IBR) on the provider’s behalf, SCIF blinked and abruptly reversed course and paid the disputed amount.

Moreover, like any experienced chicken, SCIF then scurried to escape the consequences of their error, reaching out directly to the state’s designated IBR organization to dismiss the case. Like other IBR Chicken players, SCIF claimed that since the insurer paid the amount originally billed, there’s no longer any dispute to resolve.

We beg to differ.

Because SCIF put this doctor through the hassle and expense of appealing all the way to IBR, SCIF owes more than the disputed amount.

The doctor in this case is also entitled to penalties, interest payments, and restoration of the $180 IBR filing fee remitted to request IBR. So far, SCIF has ignored these picayune (to SCIF, anyway) payment details.

After refusing payment for the original bill on demonstrably false grounds, then doubling down on that refusal following Second Review, SCIF seemed intent on refusing payment. But following the provider’s IBR request, SCIF had a not-unfamiliar change of heart, claiming that a “data entry error” — presumably one that occurred twice — was to blame for the denial.

But rather than remitting payment and asking DaisyBill to withdraw the IBR request (which we do not recommend, ever), SCIF appealed directly to Maximus, the California Division of Workers’ Compensation (DWC)’s designated Independent Bill Reviewer, with the letter below. 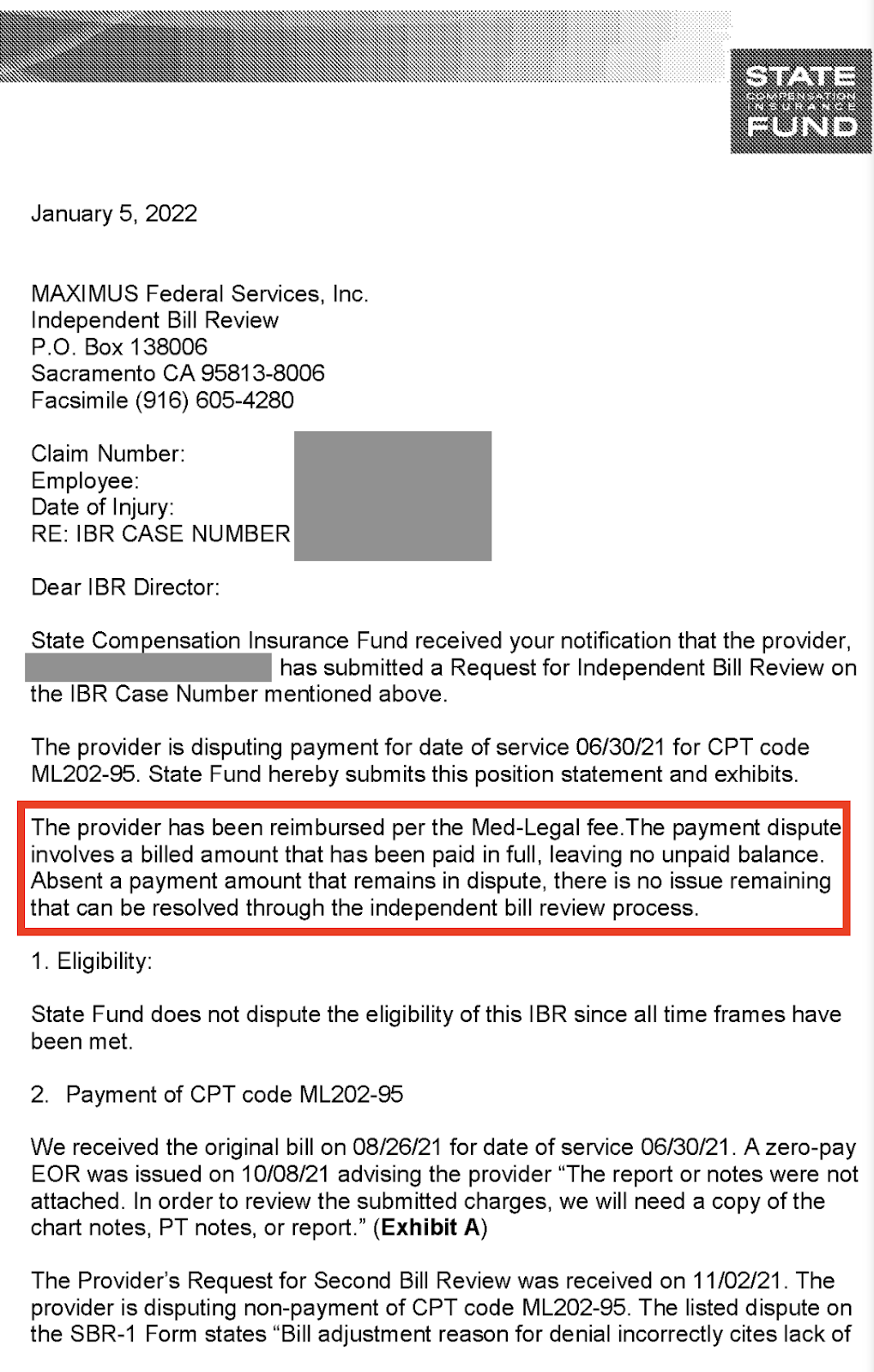 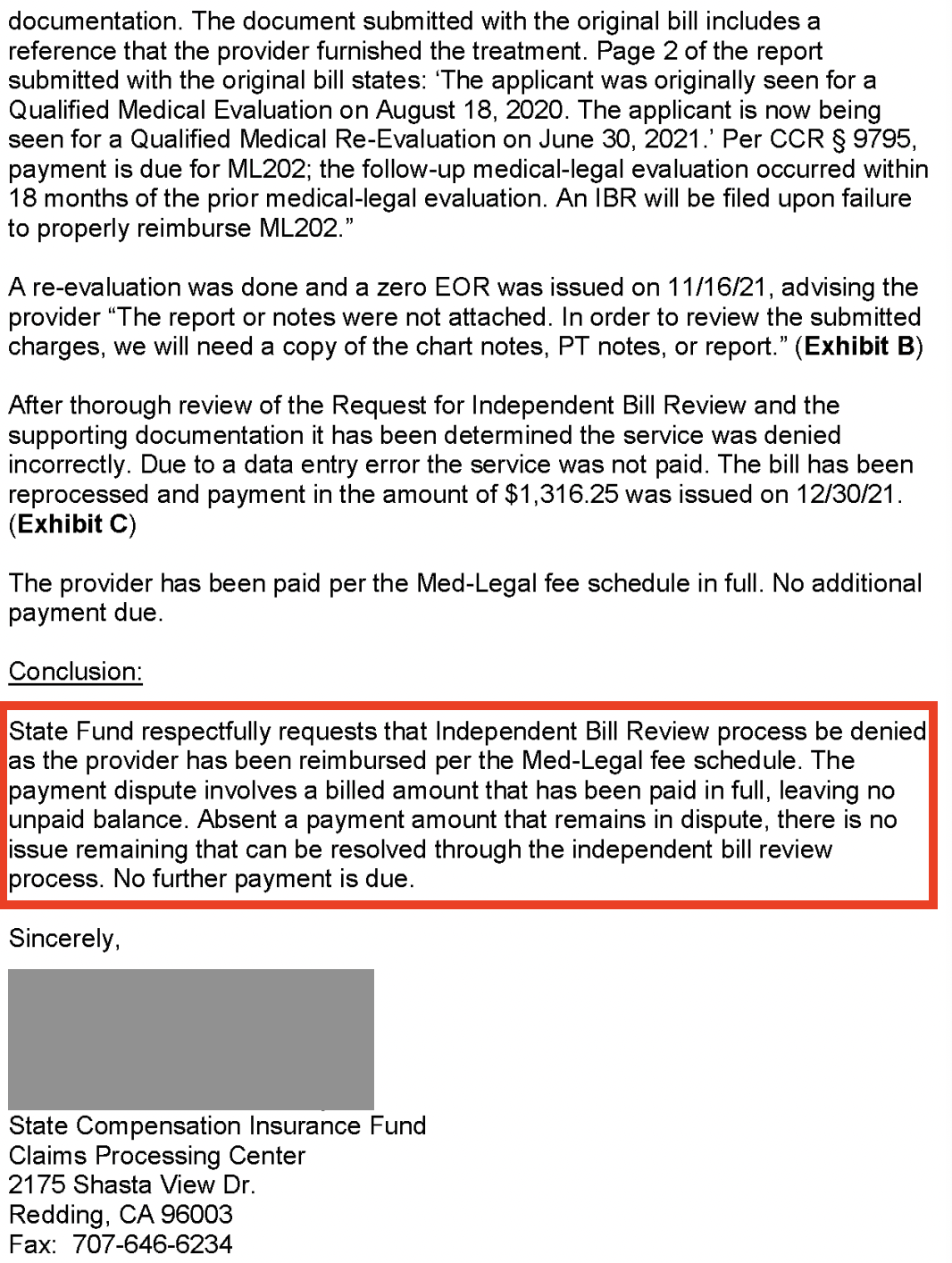 In the letter, SCIF stated:

“The provider has been reimbursed per the Med-Legal fee [schedule]. The payment dispute involves a billed amount that has been paid in full, leaving no unpaid balance. Absent a payment amount that remains in dispute, there is no issue remaining that can be resolved through the independent bill review process.”

SCIF owes the penalty/interest and the IBR fee for a very good reason: the provider deserves compensation beyond the amount disputed for the extra time and resources required to pursue the (invalid) “dispute”.

Additionally, rules without consequences leave payers little incentive to comply; if all SCIF lost by improperly denying payment was the amount initially billed, the less scrupulous sort of claims administrator would be tempted to deny much more often — perhaps even knowingly under false pretenses (read: IBR Chicken).

No Consequences, No Compliance. Chaos.

Unfortunately, the penalties, interest payments, and IBR filing fees owed following an IBR decision in the provider’s favor are “self-executing.” California trusts the payer to remit those payments by their own volition. (As we’ve pointed out numerous times before, the honor system does not work when there is no honor to be found).

Bottom line: California workers’ comp is mired in frictious chaos. Payers are allowed to improperly withhold reimbursement for the treatment of injured workers, only to skirt consequences when the provider or their billing agent pushes back.

SCIF lost this particular game of IBR Chicken. In the spirit of sportspersonship, the insurer should suck it up, take the “L,” and remit all payment owed. Or even better, cease with the games, and instead properly reimburse the doctors who treat injured workers.