DaisyBill’s early clients, who started submitting bills electronically through us in 2013, were percipient. In the climate of 2020, with COVID work-from-home requirements and increasing failures of traditional mail systems, providers must find alternatives to mailing their workers’ comp bills. The adoption of electronic billing has substantially increased since January of 2020 and, with this growing adoption, it is essential that electronic billing actually works.

Workers’ comp e-billing that works was the original DaisyBill mission. Our growing client list has submitted over 6.5 MILLION original bills and over 750,000 Second Reviews appeals, and nearly all of the 7.2 MILLION bills and appeals were submitted electronically.

Nationally, there are six main clearinghouses that perform as electronic billing agents on behalf of hundreds of claims administrators:

As the electronic agent for DaisyBill provider clients, DaisyBill carefully monitors compliance for all the clearinghouses chosen by claims administrators. DaisyBill has developed extensive technology that tracks both the receipt and the processing of the electronic bills sent by our clients. With the benefit of this data, DaisyBill has and will continue to report significant claims administrator non-compliance to state regulators.

On behalf of our provider clients, DaisyBill contacted WorkCompEDI to determine the explanation (and the fix) for bills being routed to Sedgwick rather than the chosen claims administrator. WorkCompEDI explained that "an issue that caused a specific subset of bills to be resubmitted to Sedgwick incorrectly was determined and contained to a specific number of bills."

For our clients, WorkCompEDI provided DaisyBill a list of incorrectly routed bills. DaisyBill has already posted a notice on our clients’ bills that were impacted by the error. Additionally, WorkCompEDI stated that it has routed the affected bills to the correctly designated claims administrator. 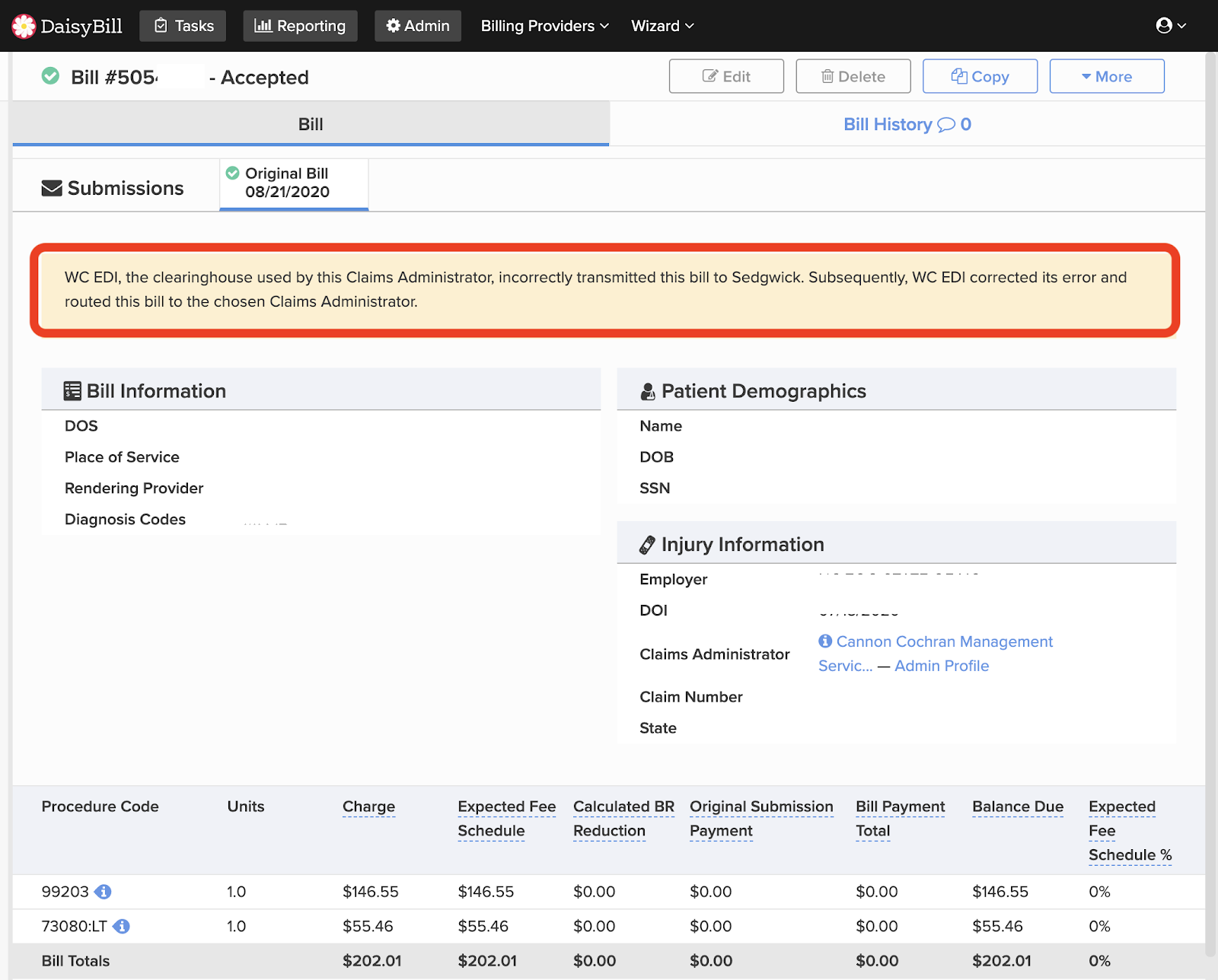 For providers who are not (currently) clients of DaisyBill, we suggest careful monitoring of bills submitted to WorkCompEDI during August to make sure that the WorkCompEdi error does not impact timely or proper reimbursement.

WorkCompEDI plans to notify receivers of the misrouted bills sometime this week. According to WorkCompEDI:

“The net effect of this effort will be that submitters may receive rejection notices from Sedgwick, but their bills have been re-delivered by WorkCompEDI to the originally intended & correct receiver.”

Although our number one focus is servicing the provider community, we are supportive of the employers and claims administrators that are also part of our industry. Most recently, a large California claims administrator contacted DaisyBill to discuss our experience with the various clearinghouses. This claims administrator was interested in replacing its current clearinghouse and wanted our opinion as to which of the entities were most compliant with state electronic billing regulations.

Whether you’re a workers’ comp provider or payer, DaisyBill can help you with compliant electronic billing and processing. We have tons of free resources at DaisyBill.com and we’re just an email or phone call away to answer your workers’ comp billing questions.

The University of California Needs to Better Monitor Sedgwick

Today we are focusing on a self-insured employer, the University of California, and its third-party administrator, Sedgwick. Unfortunately, Sedgwick is not complying with Cal...