Recent ICD-10 Updates Do Not Apply to Workers' Comp Billing

The latest in dubious denial strategies for California workers’ comp: some claims administrators are denying provider bills for being out of step with updates to the current International Classification of Diseases (ICD-10). However, California does not automatically adopt changes to the ICD-10.

The ICD-10 is a product of the World Health Organization (WHO), which has maintained the universal disease classification system since 1948. The Centers for Medicare and Medicaid Services (CMS) initially adopted and revised the ICD-10 for use in the United States, creating the roughly 70,000-code ICD-10-CM.

In the current version of the Billing and Payment Guide, version 1.2.2, the DWC adopted ICD-10-CM for all medical bills (along with a separate ICD for inpatient hospital services, ICD-10-PCS). There was a 12-month grace period in which claims administrators could not deny payment solely due to insufficient specificity in listing the ICD-10 code.

ICD-10 in the DWC Billing and Payment Guide

When the DWC adopted the 2015 ICD-10, the exact files containing the ICD-10 as it was written in 2015 were incorporated by reference, as shown below in section 3.2.1 of the current Billing and Payment Guide: 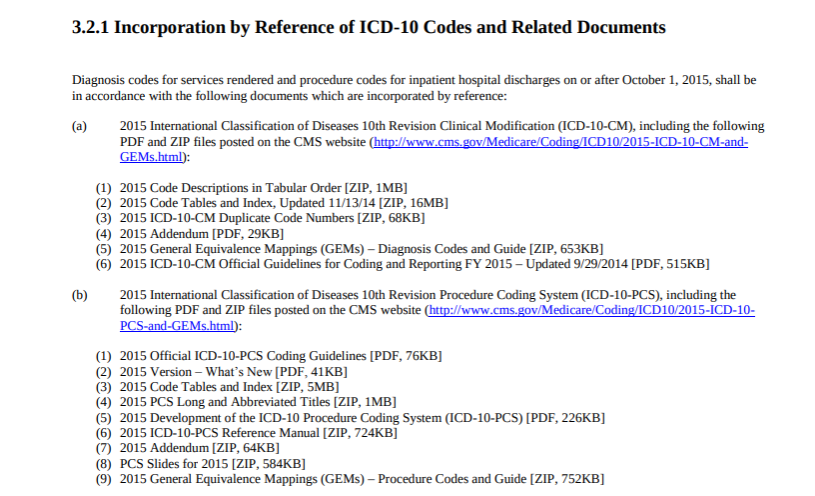 There are multiple updates to the ICD-10 annually. The updates add new codes, and expire others. Some workers’ comp claims administrators update their own systems accordingly, and deny bills based on the use of expired codes. However, this is completely unjustifiable given the actual rules for California billing.

As the 12-month grace period suggests, incorporating an entire ICD-10’s worth of information into an already complex billing system — and expecting providers to bill accordingly — is a very tall order. It stands to logic that the DWC made no provision to continually incorporate every update to the ICD-10.

That would be inefficient, and unreasonable for providers.

As California Code of Regulations (CCR) Section 9792.5.1 makes clear, the “billing, payment and coding rules for paper and electronic medical treatment bill submissions” stem from the Billing and Payment Guide, not from the WHO, the CMS, or any other entity. So long as the current Billing and Payment Guide links to the 2015 ICD-10 files, the 2015 ICD-10 files dictate which ICD-10 codes are sufficiently specific for a compliant bill.

Payers may reasonably argue that some regular updates to the Billing and Payment guide are warranted as the ICD evolves. As we reported last year, the ICD-11 is already on the horizon. But as it stands, it is the DWC’s role — not claims administrators’ — to determine when the rules change. Providers, appeal accordingly.

DaisyBill makes the ICD easy. Our Billing Software automatically populates the correct ICD-10 code based on the date of service. And there’s much, much more. Sign up for a free demonstration today.