SCIF avoided Independent Bill Review (IBR) by changing the reason SCIF denied payment due to a doctor for authorized treatment. Unfortunately, the California Division of Workers’ Compensation (DWC) witnessed and enabled SCIF’s refusal to reimburse a doctor for treatment SCIF approved for an injured worker.

This tale of inequity starts with SCIF sending an explanation of review (EOR) to a doctor denying reimbursement for authorized treatment. The EOR that SCIF sent incorrectly asserted that the doctor failed to furnish the required documentation with the bill. SCIF also denied the doctor’s Second Review appeal with the same incorrect assertion of insufficient documentation.

After the doctor paid $180 to file for IBR to dispute the incorrect denial, SCIF countered the doctor’s IBR request. SCIF told the DWC that SCIF denied reimbursement because it questioned liability for the authorized treatment. Despite SCIF sending two EORs to the doctor denying reimbursement based on improper documentation, not liability, SCIF reported a completely new and different denial reason to the DWC.

The DWC declared the dispute ineligible for IBR due to the liability issue SCIF raised (an issue that SCIF never conveyed to the doctor). Much to our disgust and outrage — but, sadly, not our surprise — the DWC essentially endorsed SCIF’s exploitation of this doctor.

To seemingly evade IBR, despite authorizing the treatment, SCIF converted a perfectly straightforward billing dispute for authorized treatment into a liability dispute. The DWC allowed this arguable bait & switch, even though the DWC’s own FAQ page for utilization review assures providers that authorization guarantees payment:

Q. Does sending the requesting physician an approval of an RFA mean that payment must be made for the authorized service?

A. Yes. Authorization means "assurance that appropriate reimbursement" for the treatment specified will be paid. The California Labor Code provides that once an employer (or its insurer or URO) authorizes medical treatment, that authorization shall not be rescinded or modified for any reason after the medical treatment has been provided based on the authorization, even if the employer later determines the physician was not eligible to treat (e.g. was not an MPN provider). Under the UR regulations, treatment is "authorized" when the decision to approve the RFA is communicated to the requesting physician.

Below, we expose the maneuverings by SCIF to avoid paying a doctor for authorized treatment.

The DWC Medical Billing and Payment Guide, Section 6.2(a), states that if a payer contests a bill, the claims administrator must provide notification to the doctor “of the items being contested, the reason for contesting those items and the remedies open to the health care provider, health care facility or billing agent/assignee.”

As the original EOR below shows, SCIF incorrectly denied payment on the grounds the provider failed to include the required documentation with the original bill. 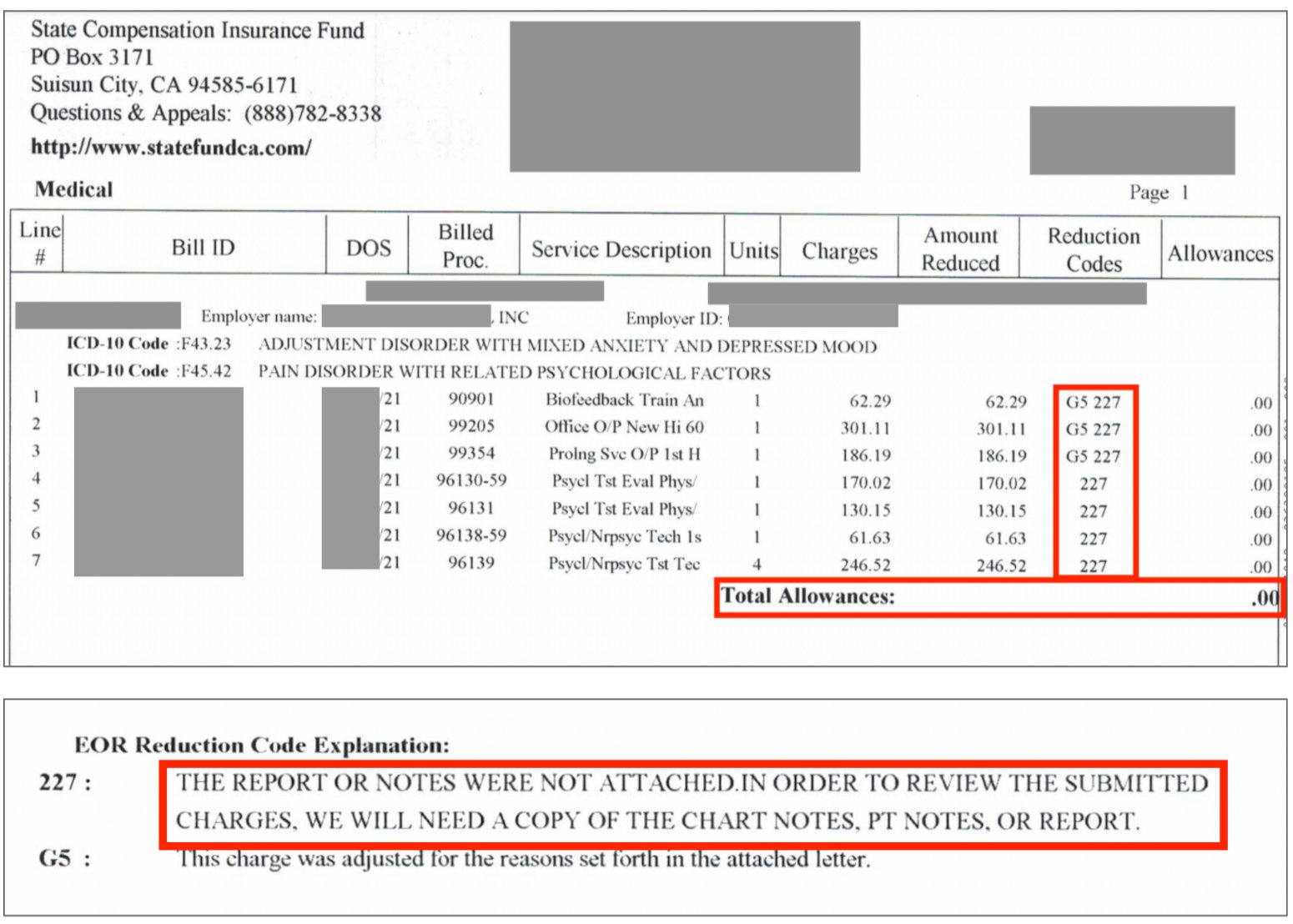 SCIF’s reimbursement denial is demonstrably incorrect, since the provider included all the required reports with the original electronic bill submission. The screenshot below from DaisyBill software clearly shows that the required documents, including proof that SCIF authorized the treatment, accompanied the bill submission:

Appropriately, the provider submitted a timely Second Review appeal disputing the improper payment denial. The Second Review included the identical required documentation submitted with the original bill, once again including proof that SCIF authorized the treatment.

SCIF continued to refuse reimbursement and denied the Second Review appeal with the same unfounded and now twice-disproven reason: that the provider failed to include the required documentation. 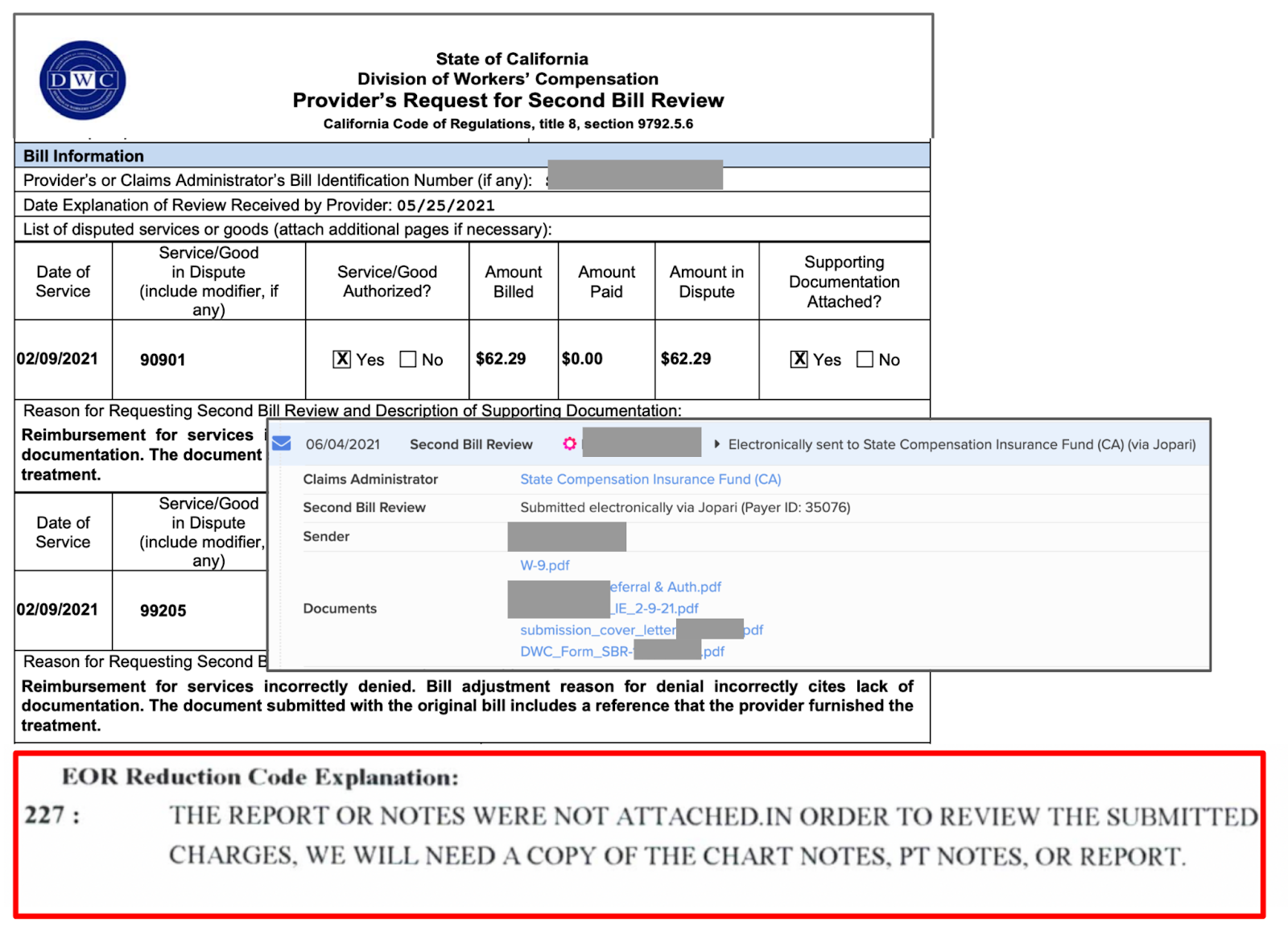 Step 3: SCIF changes the denial reason in response to the IBR request.

To dispute the incorrect reimbursement denial, the provider submitted a request for IBR (along with $180) to Maximus. 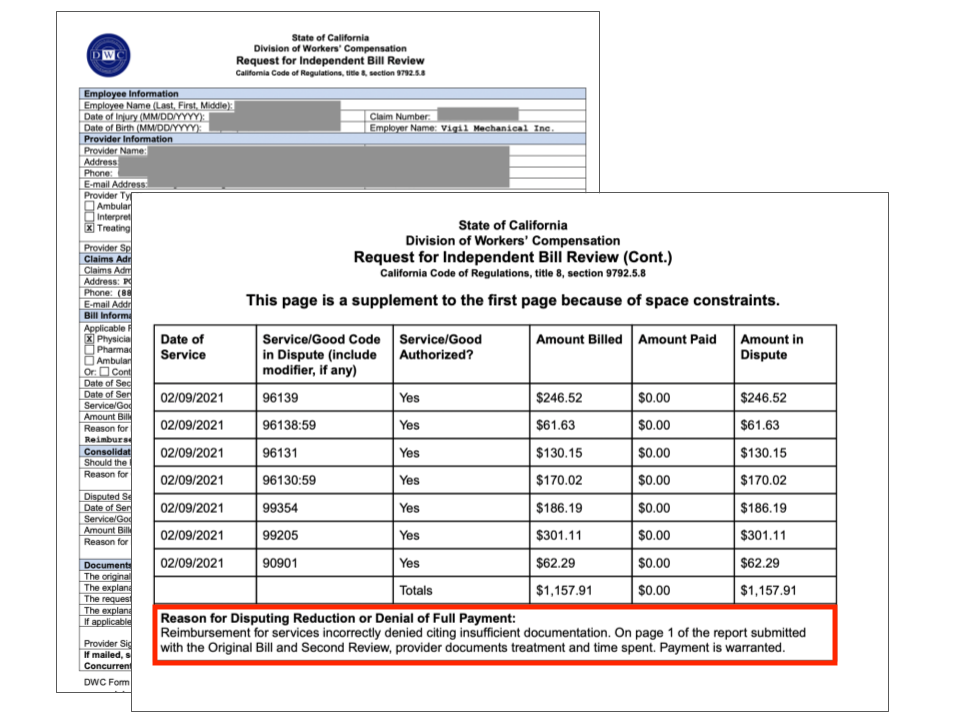 ...and this is where SCIF manipulated the IBR process to convince the DWC to go along with its mistreatment of this doctor.

When a provider requests IBR, Maximus sends the claims administrator an official Opportunity to Dispute Eligibility. In other words, the claims administrator gets a chance to convince the DWC to refuse to conduct IBR. In response to the Opportunity to Dispute Eligibility, SCIF forgot all about the “missing” reports and gave the DWC a completely different argument.

This time, SCIF asserted that there was an “issue of liability” surrounding the treatment that SCIF AUTHORIZED. 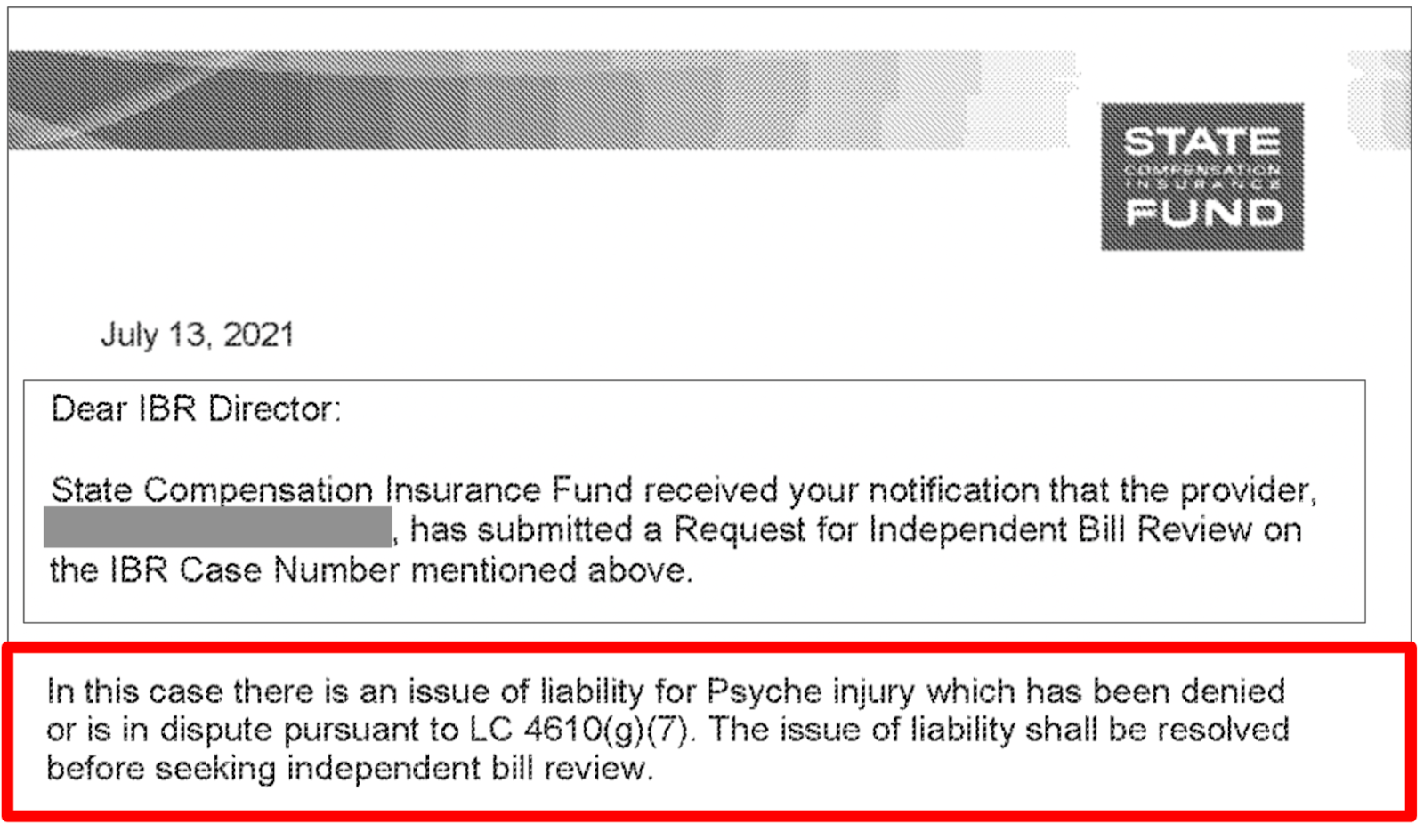 The DWC then rewarded SCIF by ruling the dispute ineligible for IBR due to contested liability, with apparently little concern that SCIF never conveyed the new liability issue to the provider. 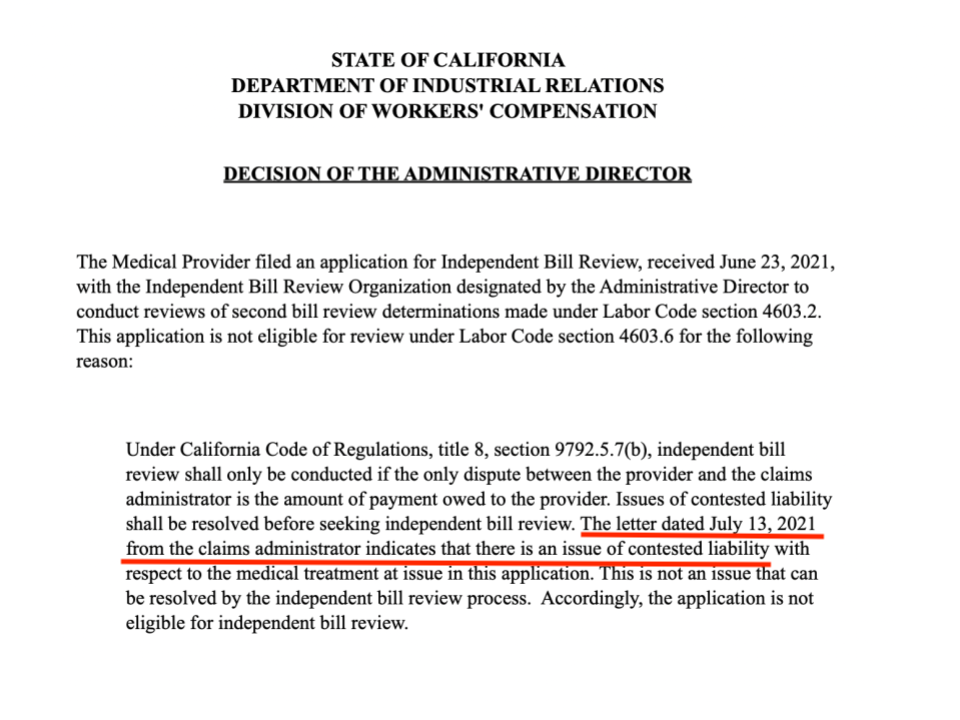 To recap SCIF’s steps to avoid paying a doctor who treated an injured worker:

The lesson? Even mentioning a threshold issue allowed the DWC to wash its hands of the matter entirely, allowing SCIF to keep the doctor’s reimbursement.

Has SCIF Hacked the IBR System?

SCIF’s tactic should be troubling to all of California workers’ comp providers who receive authorization to treat injured workers.

By denying payment for a reason that would qualify the dispute for IBR, only to change that reasoning in response to an actual IBR request, SCIF has revealed yet another serious flaw in California’s inequitable appeals process to dispute incorrect reimbursements.

There’s no rule or regulation that prevents a claims administrator from denying payment for one reason, only to offer a different reason to the DWC. This is not the first time we’ve seen what amounts to a payer throwing one denial reason at the wall, and when it didn’t stick, deflect the DWC away from the dispute by invoking a threshold issue.

To say the least, it’s not fair play. To say the most, it’s an injustice against which providers could understandably be tempted to revolt.

This recent decision reinforces that in California workers’ comp there is an open invitation for claims administrators to deny, deny, deny, citing any reason (applicable or not), safe in the knowledge that if the provider calls on the DWC for help, a few magic words can make the threat of IBR disappear. Cha-ching! SCIF demonstrates exactly the required steps.