Recently, we alerted the workers’ comp community to the efforts of Conduent, acting on behalf of Third-Party Administrator (TPA) Athens Administrators, to reduce the amount owed to a doctor to rates well below California’s Official Medical Fee Schedule (OMFS).

Conduent’s proposed discount contract established that in the event Athens-Conduent failed to timely pay the reduced reimbursement, the doctor waived “all penalties and interest/attorney fees” owed for the “referenced dates of service.”

For treating an injured worker, this proposed contract would allow Athens to pay the doctor only 80% of the OMFS — potentially weeks, months, or years late, with no penalty for Athens.

Below, we explore even more misleading language contained in the proposed discount contract which Athens-Conduent faxed to the doctor.

Let’s take a closer look at the entities either tangentially or directly involved in this contracting scheme:

Anybody with experience in the workers’ compensation space knows that the term “administrator” is commonly associated with “claims administrator,” which has a very specific meaning in our industry — so much so that the CA Division of Workers’ Compensation (DWC) defines the term on p. 1 of its Medical BIlling and Payment Guide.

Note that on the DWC’s search directory for claims administrator offices, Conduent is nowhere to be found. 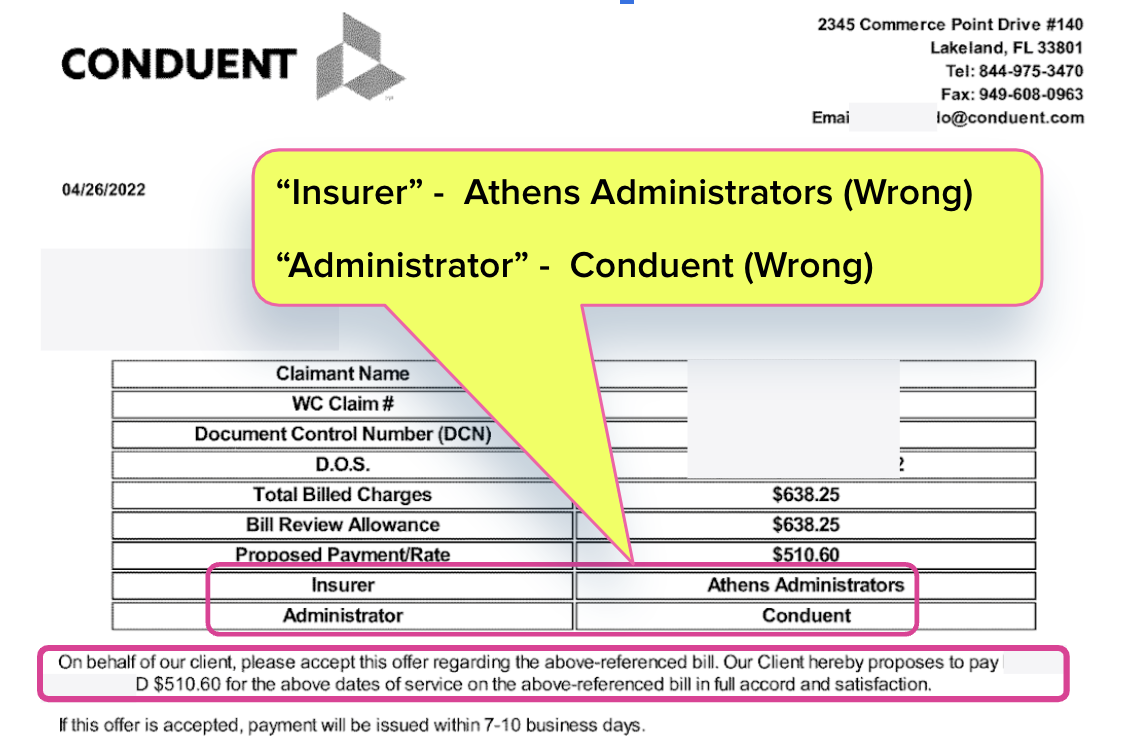 Crucially, the Athens-Conduent contract proposes to reduce the reimbursement to a doctor who treated an injured employee of The Permanente Medical Group, Inc., a self-insured employer.

As a self-insured employer, The Permanente Medical Group is financially responsible for ensuring workers’ compensation coverage for its employees.

Noted above, the Athens-Conduent contract confusingly states: “On behalf of our client, please accept this offer regarding the above noted referenced bill.” Is Conduent acting on behalf of The Permanente Medical Group?

The Athens-Conduent contract also confusingly states: “Our Client hereby proposed to pay $510.60 for the above dates of service on the above-referenced bill in full accord and satisfaction.” Since The Permanente Medical Group is financially responsible for all medical treatment, is Conduent acting on behalf of this self-insured employer? 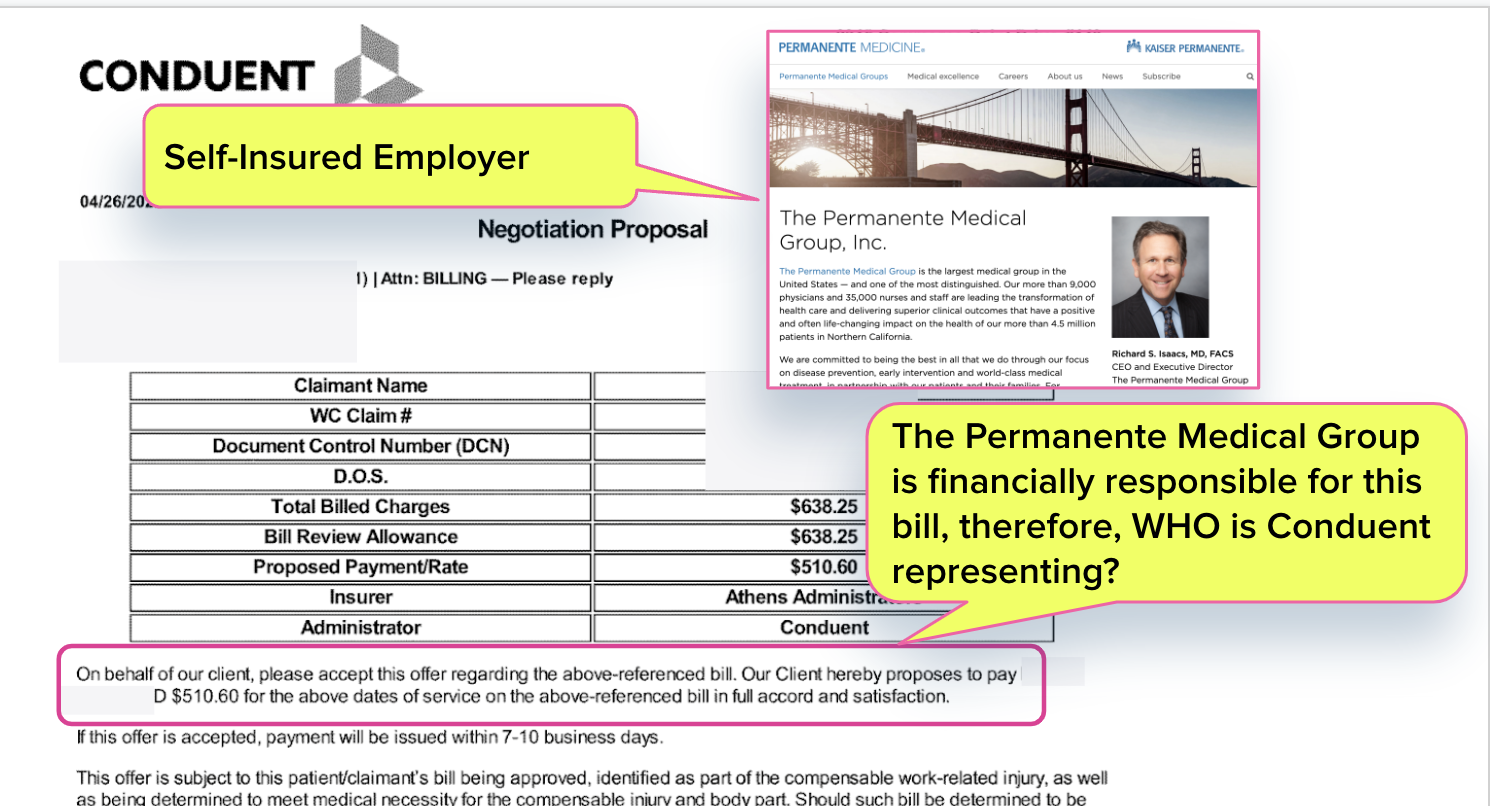 The California OSIP maintains a website to verify important details about self-insured employers, including the entities that act as TPAs on behalf of the employers. 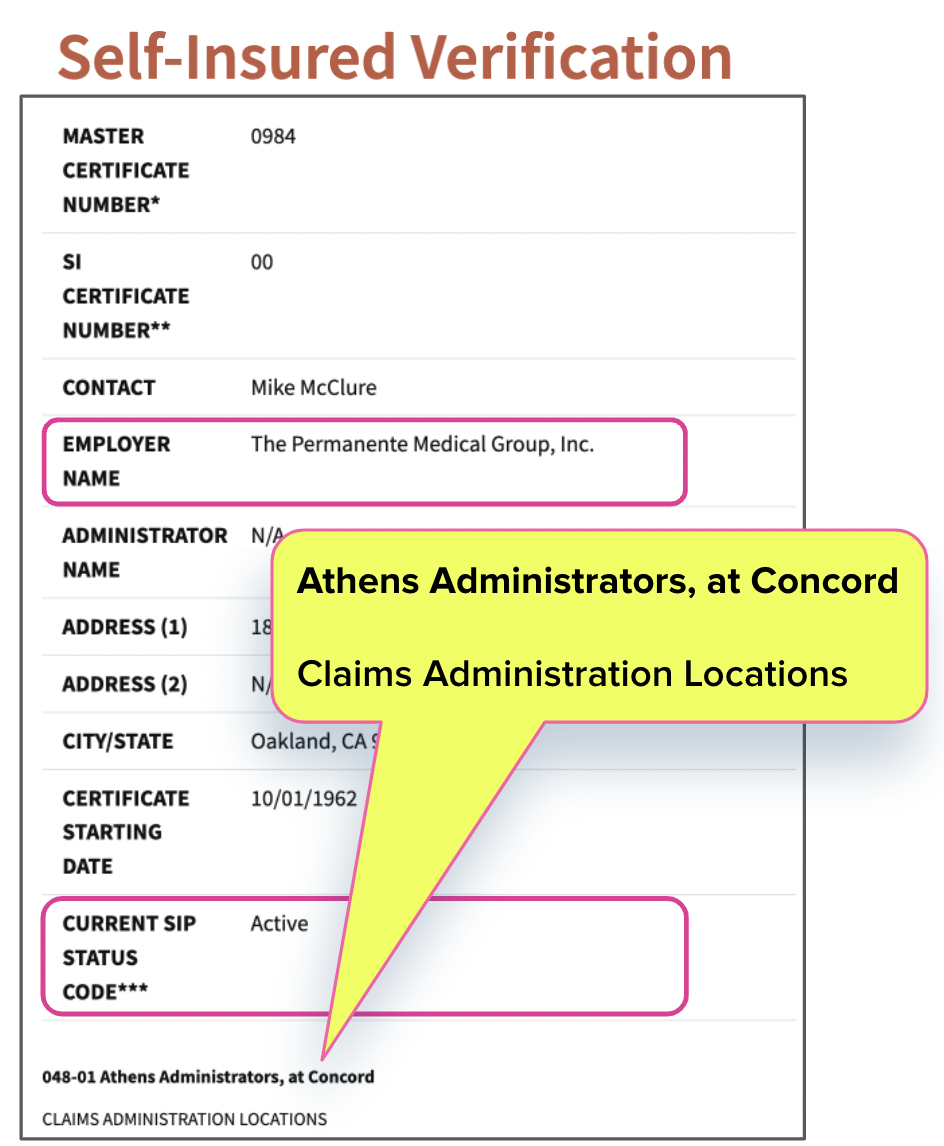 We cannot believe that The Permanente Medical Group is directly involved in the Athens-Conduent scheme to, apparently, trick a doctor who provided an injured employee authorized care.

Further, it is difficult to believe that any employer believes that the payment abuse demonstrated by Athens-Conduent is in the best interest of either the injured worker or the employer.

All employers, especially medical groups, surely recognize the importance of retaining doctors in the workers’ compensation system – doctors who are willing to treat their injured workers while jumping through authorization, billing, and other administrative hoops. Tactics like those employed by Athens-Conduent only serve to reduce the already-shrinking roster of these doctors.

The next article in our Athens-Conduent series details yet another tactic the duo uses to browbeat providers: the rain of hard-sell phone calls.

For now, daisyBill opts to believe (rightly or wrongly) that The Permanente Medical Group is also a victim of this scheme.