Broadspire, a global third-party claims administrator (TPA), incorrectly denied several bills for the treatment of an injured worker. While incorrect denials are nothing new in California workers’ comp, one thing makes this situation even more egregious: by Broadspire’s own admission, the denied bills were still in process.

What’s more, the usual billing and payment process is further complicated by the provider’s inclusion in a network. As this situation demonstrates, the benefits of participating in some networks are dubious at best — especially considering the payment hassle networks can create.

Something seemed amiss when the provider in question first received the electronic Explanations of Review (EORs) from Broadspire. According to California Labor Code Section 4603.3, a complete EOR must include “the basis for any adjustment, change, or denial of the item or procedure billed.”.

As the non-compliant EOR (pictured below) shows, Broadspire did not meet this standard. 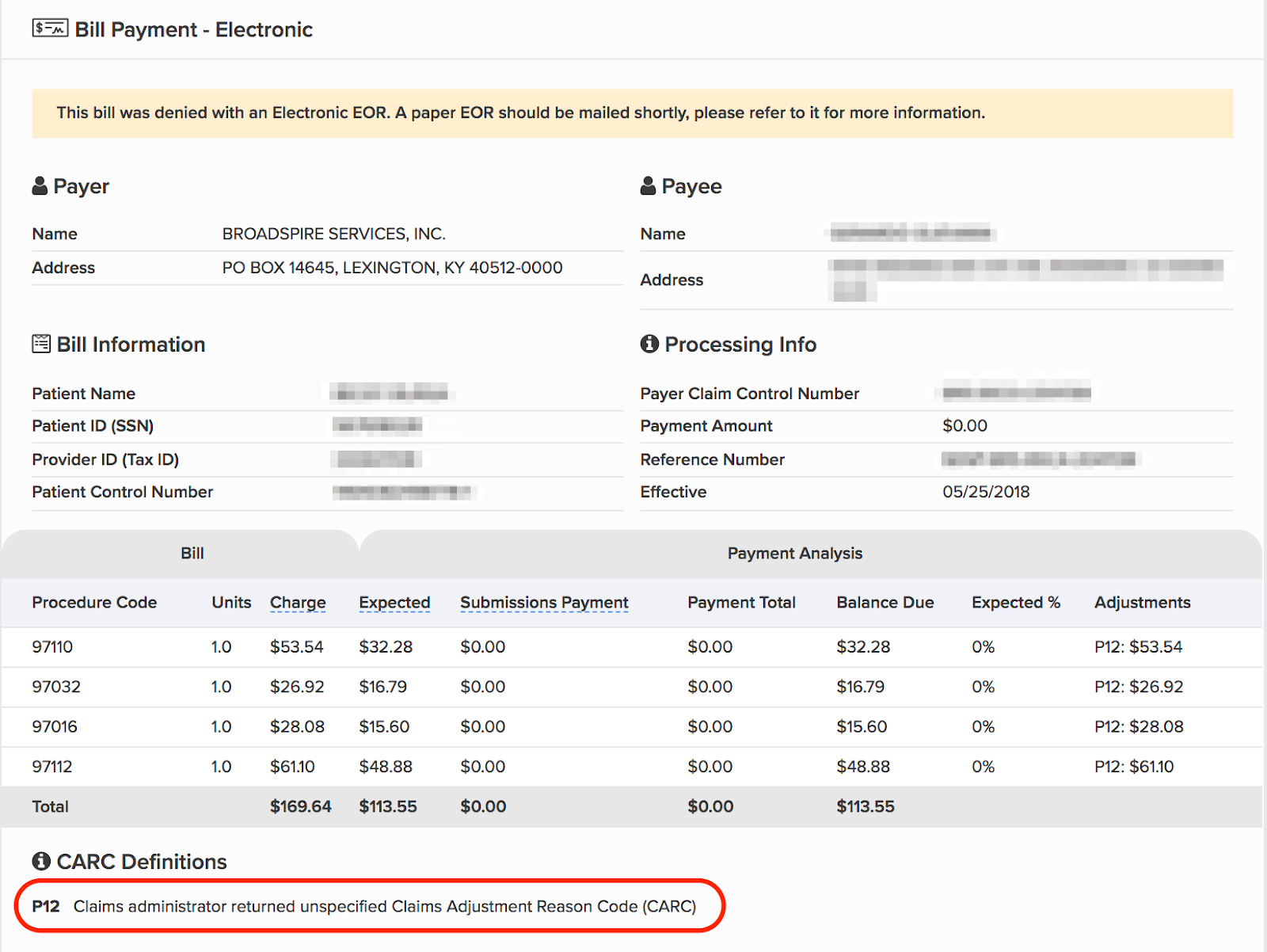 Broadspire couldn’t — or wouldn’t — provide the reason for the bill denial. To determine the exact reason for the denial, DaisyBill contacted Broadspire on the provider’s behalf. Astonishingly, the Broadspire representative informed us that the bills were “still in process in the adjustor’s queue.”

In other words, Broadspire denied bills without processing them.

Just Say No to (Some) Networks

Why did Broadspire put the cart of denial before the horse of processing?

When our compliance team tried to find out how Broadspire managed to issue denials for unprocessed bills, a Broadspire representative revealed another layer to the story: the provider in question participates in a network.

Theoretically, providers join networks to increase business. In exchange for reimbursement discounts, the network steers patients to the provider.

Of course, not all networks come with added complications.

Broadspire’s claims adjuster confirmed that the provider in question should send bills directly to MedRisk. But neither MedRisk nor Broadspire bothered to communicate this information to the provider, which led to the current debacle.

In theory, it shouldn’t be that difficult for Broadspire to electronically transmit bills to MedRisk. An electronic route of the kind DaisyBill maintains with countless payors is all it takes. This way, Broadspire can get bills where they need to go, rather than issuing generic denials that baffle the provider.

Whatever portion of the blame we assign to Broadspire and MedRisk, respectively, one thing is clear: the added step of passing Broadspire claims through MedRisk resulted in a non-compliant EOR, created pointless friction, delayed payment, and wasted the provider’s time.

Ready to make billing and payment easier than ever? Try our Billing Software, which instantly generates compliant RFAs, bills, and appeals. Schedule a free demonstration, and see what DaisyBill can do for your office.

There was a time when electronic billing was the future of workers’ comp revenue management. COVID-19 accelerated that transition, making e-billing an immediate necessity.