You’ll have to read it to believe it.

Third-Party Administrator (TPA) Broadspire sent a perfectly ludicrous letter to a doctor, demanding the doctor refund Broadspire for an alleged overpayment of multiple bills due to mysterious ‘network keying’ error.

According to the (largely incoherent) letter, Broadspire asserts the doctor owes the TPA money due to a “keying issue” that deprived “the network” of a large enough discount. With this letter, Broadspire exposes precisely how networks generate revenue: by simply “keying” away portions of the reimbursement owed to doctors for treating injured workers.

Broadspire is demanding money from a doctor, on behalf of a network that provided zero services to either the patient or the doctor. It’s one of the laziest, most poorly justified attempts we’ve seen to filch unearned revenue from a practice. Nonetheless, Broadspire felt confident enough to give it a try (perhaps emboldened by the lack of consequences for claims administrators that will seemingly try anything for an extra buck).

To be clear, no response is required to this letter (shown below) other than to place it in the shredding machine.

Absent fraud or a separate contract specifically requiring refunds in the event of overpayment, providers are under no obligation, legal or otherwise, to remit refunds to claims administrators. Providers should not be bamboozled by letters or other communications from claims administrators or networks claiming otherwise — even if, as in this case, the communication has a big, red, official-looking “Important” stamp on it.

When will California put a stop to this kind of payment abuse?

“This request is regarding a verified as an overpayment due to the original bill not exporting to the network due to a keying issue.” (This is an actual sentence typed by a presumably adult Broadspire representative.)

The letter offers no further details, except to demand a $72.85 refund for “multiple” patients, claim numbers, and dates of service, none of which Broadspire bothers to identify. The letter also asks the doctor to treat the refund request as a “priority item.”

Broadspire does not explicitly assign the blame for this “keying issue” to itself, its vendors, or the unidentified network, but the doctor has no idea what a “keying issue” is, never mind being able to exert control over any such “keying.”

Further, every doctor, employer, and injured worker should be outraged that California allows claims administrators to subject doctor’s bills to this “keying” process, the sole purpose of which seems to be enabling networks to skim revenue from the doctors who actually treat injured workers. 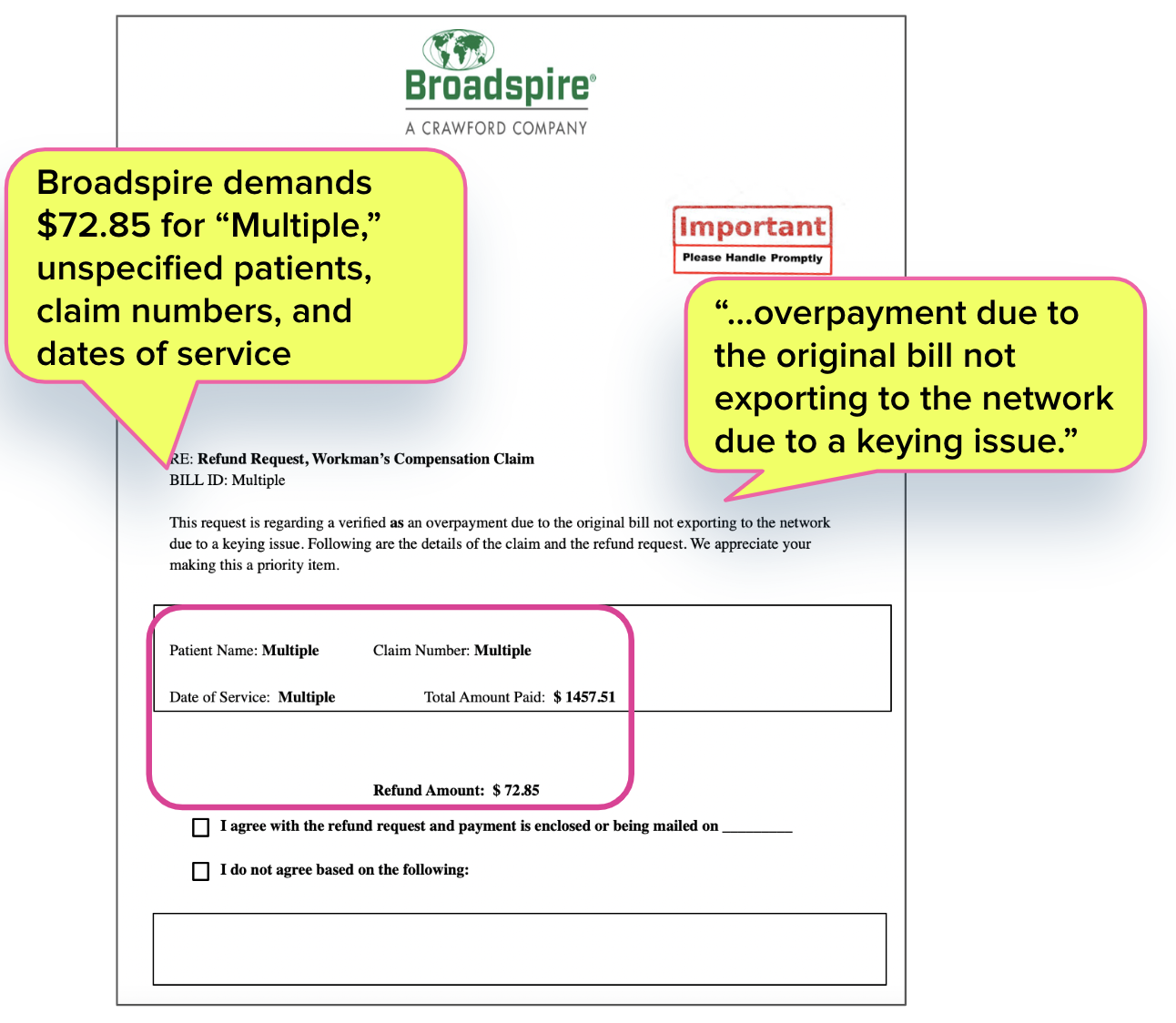 This letter joins the extraordinary list of attempted network payment abuses, including recent harassment of providers by Mitchell and Conduent. Reining in pernicious network schemes should be a “priority item” for California legislators.

No Refunds for Workers’ Comp Treatment

Between the content and the grammar, Broadspire’s letter reads like a potential scam — which isn’t far from the truth.

Even if Broadspire could bother to string together a coherent sentence, or specify the “multiple” bills in question, the provider is under no obligation to do anything with this letter other than line the bottom of the nearest birdcage. There are only two situations in which a claims administrator can legally compel a provider to return funds already paid:

The California Court of Appeals, 2nd District, made it clear in American Psychometric Consultants, Inc. v. Workers' Comp. Appeals Bd. (1995) that granting claims administrators the right to refunds (or ‘restitution’) would open the door to absolute chaos for providers, stating:

Approving restitution...would set a precedent which would have unfortunate consequences for the workers' compensation system...No one can operate a business on receipts only conditionally possessed, and medical providers are no exception.

Providers, we recommend NEVER responding to claims administrator requests for refunds. Ignore communications like the letter above, and consider simply not doing business with the likes of Broadspire, which would rather pay networks than providers.

daisyBill has the technology and expertise to make workers’ comp work better. Reach out to see how we can help your practice obtain fast, correct reimbursement for treating injured workers.

Apr 5, 2022 2 min read
Broadspire’s Confusing, Erroneous Letters to Providers
In a classic case of the left hand not knowing what the right is doing, Broadspire processed and paid providers’ e-bills, then subsequently, Broadspire sent those prov...