Following a switch to a new third-party claims administrator (TPA), the City of Pasadena violated California law by suddenly failing to accept electronic bills for the treatment of injured workers.

Fortunately, bill review software company CompIQ took it upon themselves to resolve the issue and bring Pasadena into compliance.

While Pasadena and its other associated vendors seemed less than enthusiastic about fixing the EDI problem, CompIQ took quick action. Ultimately, CompIQ’s conscientiousness saved the day for Pasadena’s bill review vendor, Lien On Me, and prevented Pasadena from continuing to break California workers’ comp law.

But all too often, we see payers who fail to work out the technical details required to adhere to this rule. Most recently, Pacific Compensation Insurance Company and Disneyland Resorts both saw breakdowns in their e-bill processing — leaving providers no way to submit e-bills for the treatment of injured workers.

Whether the problem lies with the payer’s clearinghouse, bill review, or general attitude towards compliance, California law is California law.

DaisyBill promptly emailed Lien On Me with the details of the e-billing error. Lien on Me’s Executive Director explained that the Pasadena Payer ID was actually “suspended due to the [TPA] change.” The Director then offered two (non-compliant) alternatives for providers sending bills electronically to City of Pasadena:

To which we immediately and unequivocally replied: No.

A change in TPA is no excuse to knowingly operate out of compliance with the law. As we explained to Lien On Me in our response, accepting and processing provider e-bills is mandatory in California. 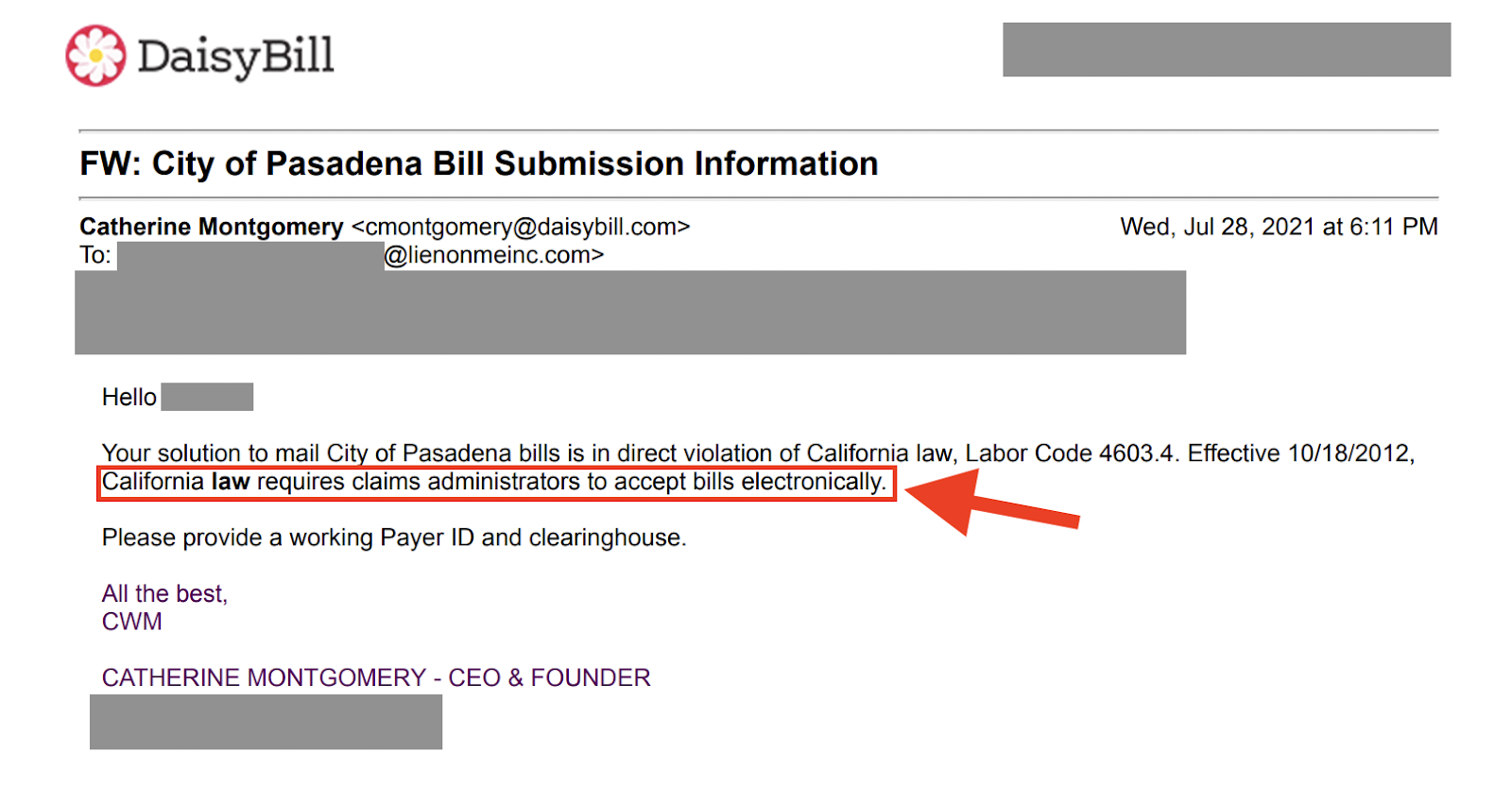 Fortunately, DaisyBill also reached out separately to CompIQ. Rather than offering excuses or inviting providers to revert to snail mail, a CompIQ representative quickly investigated and resolved the issue.

Ultimately, the City of Pasadena is legally responsible for ensuring compliance with California billing laws, regulations, and rules.

That means the City of Pasadena has a duty to insist that its vendors comply with e-billing laws.  Pasadena — not DaisyBill — should take issue with its TPA (AIMS) or bill review vendor (Lien On Me) when either fails to facilitate compliance. Kudos to CompIQ for taking meaningful action on the City of Pasadena’s behalf, and ensuring adherence to California law.

Get paid in full and on time. With quick & easy tools for authorization, billing, and appeals, DaisyBill helps protect your practice’s revenue. Reach out to learn more.

As costs skyrocket, physicians flee the system, and injured workers find it harder and harder to find a doctor willing to treat them, California workers’ comp has yet to reck...