Dept of Labor Billing Utopia: e-Bills Processed in ONE Day

Earlier this year, the DOL replaced its designated clearinghouse with its own proprietary electronic billing system that allows providers to directly transmit workers’ comp bills electronically to the DOL (no clearinghouse required). This week, DaisyBill completed the required testing with the DOL and DaisyBill started transmitting providers’ e-bills directly to DOL.

In this e-billing utopia, electronic billing replaces the inefficient and paper-intensive mailing of workers’ comp bills. In this bright billing paradise, electronic billing eliminates bills that are “lost in the mail” because payers send providers an electronic verification that the payer received the provider’s e-bills. Finally, in e-billing nirvana, payers are held accountable for timely payments, because payers are required to electronically send explanations of review (EORs) and reimbursements.

Below we show how the DOL works with DaisyBill to achieve a workers’ comp electronic billing utopia. For those not familiar, part of the DOL’s function is to act as the federal equivalent, for federal workers, of each state’s workers’ comp system. 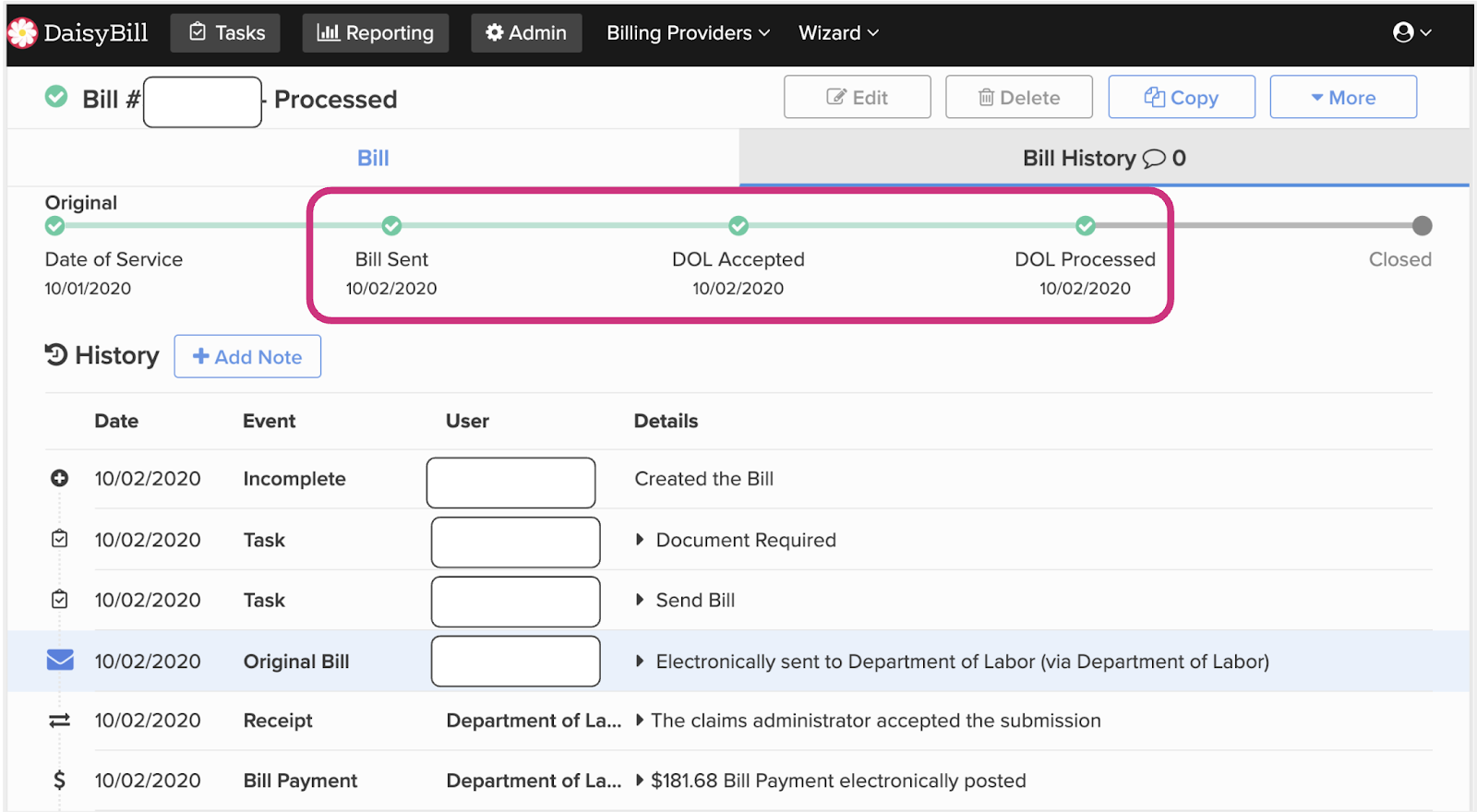 The way that the DOL electronically manages its workers’ comp bills is precisely as envisioned by California regulators. E-billing requires only three easy steps: 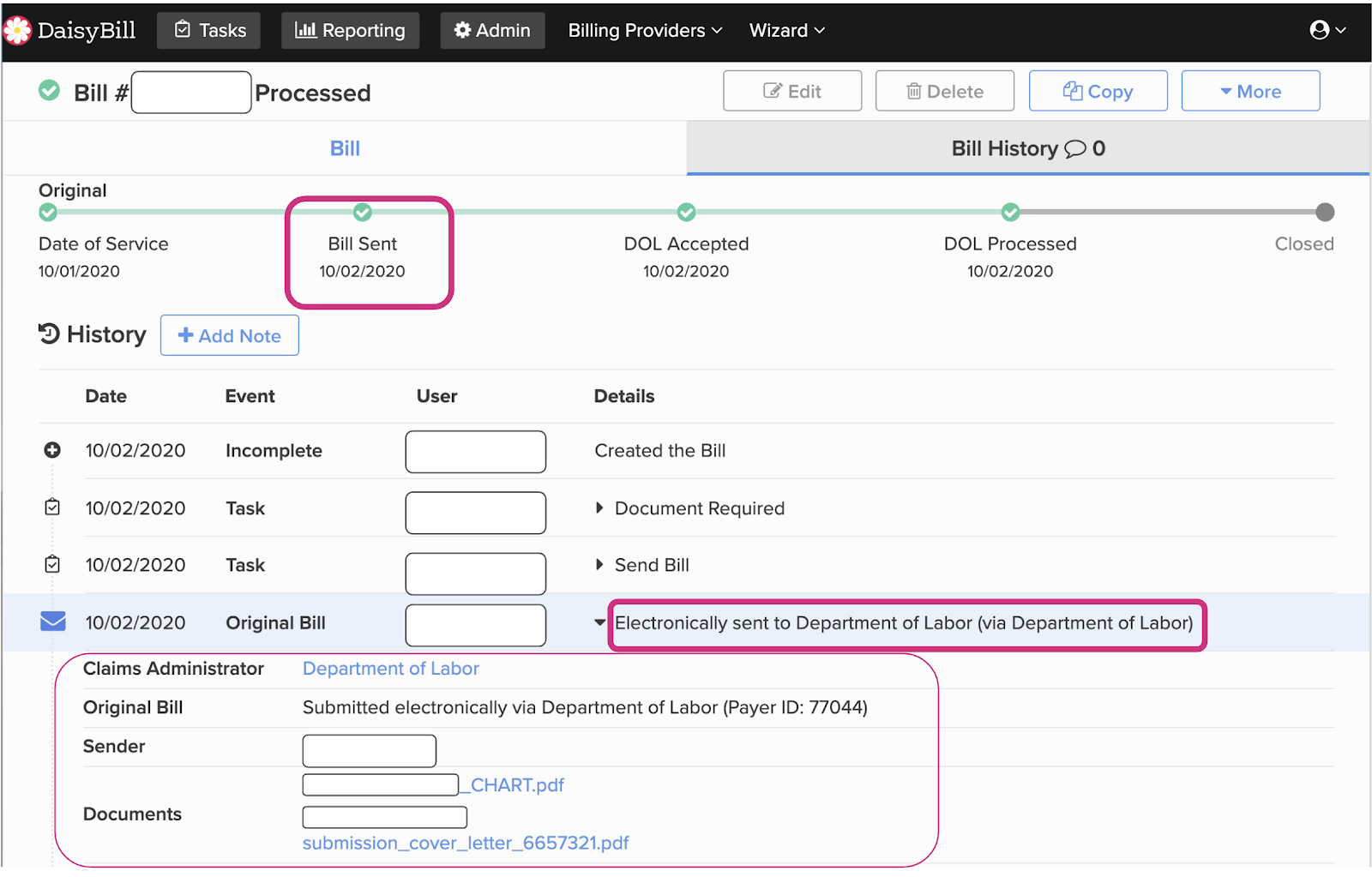 Once DaisyBill transmits the electronic bill, the DOL sends DaisyBill an acknowledgement verifying that the DOL received and will be processing the provider’s e-bill. This DOL receipt is how electronic billing eliminates those infuriating bills that are “lost in the mail.”

The DOL sends DaisyBill a standardized format known as an ASC X12N 277 Healthcare Claims Status Request Response. The DOL acknowledgment is electronic verification that the DOL both received the e-bill and is processing the e-bill. 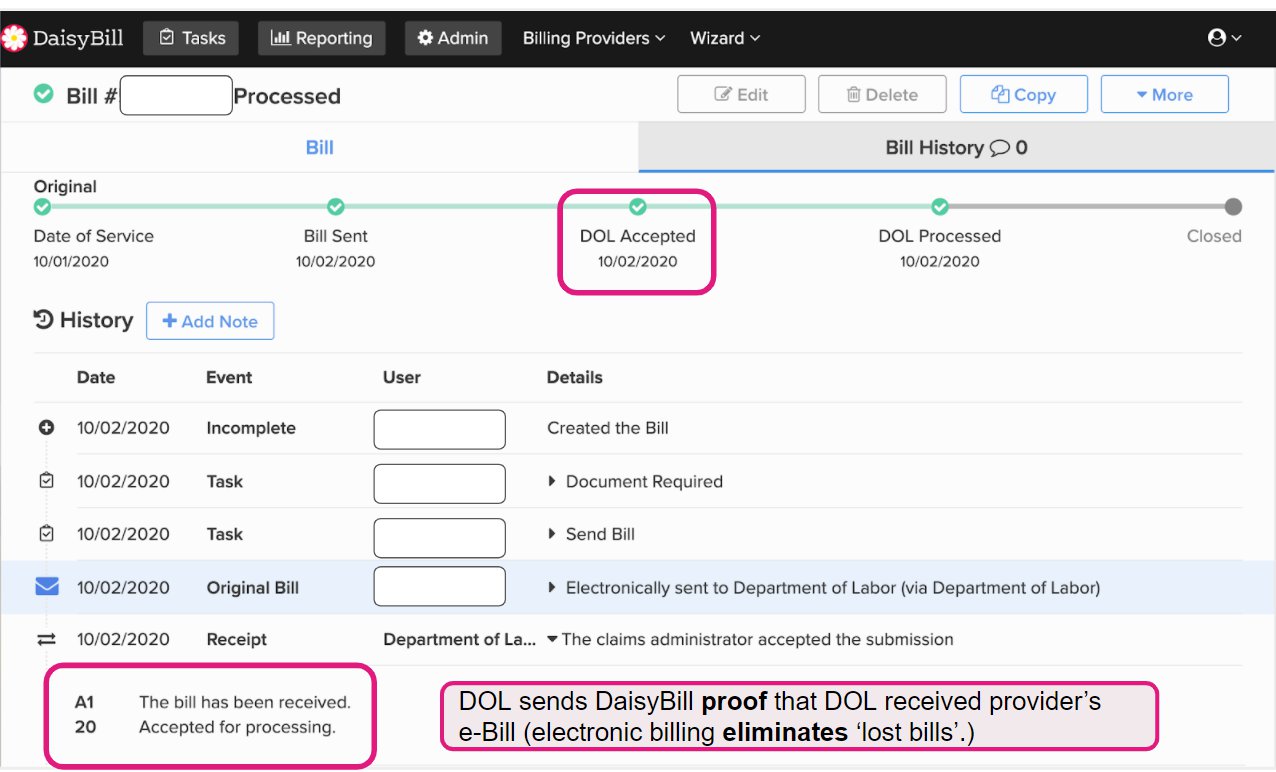 Just like California workers’ comp e-billing requirements, the DOL electronically sends DaisyBill an Explanation of Review (EOR) with the recommended reimbursement for the billed services. This electronic EOR is sent to DaisyBill in a standardized format known as an ASC X12N 835 Claim Payment Advice File. 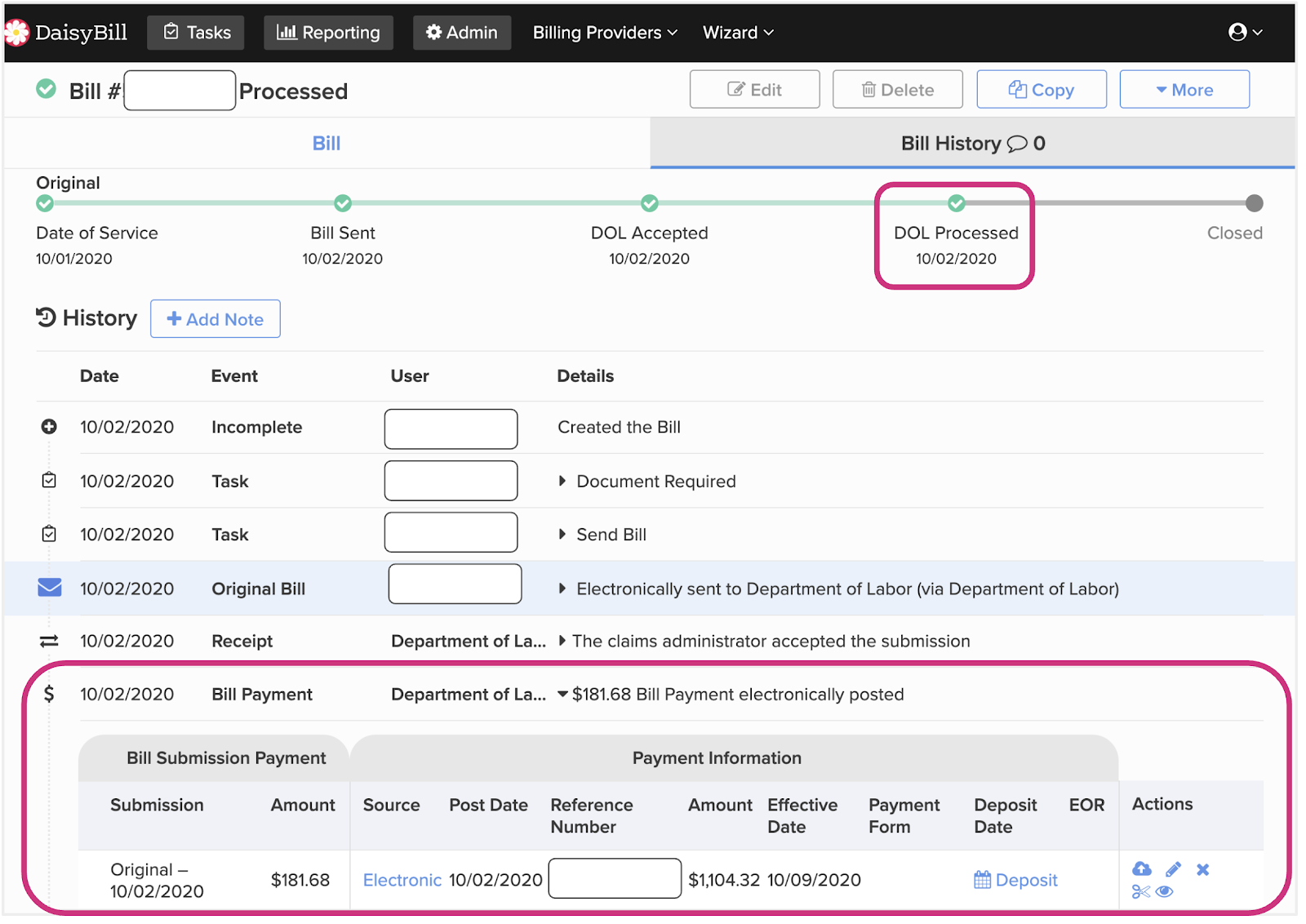 Unlike paper EORs which require provider resources to manually post the payment details, DaisyBill receives electronic EORs from the DOL and DaisyBill automatically posts these electronic EORs directly to the provider’s DOL bill. 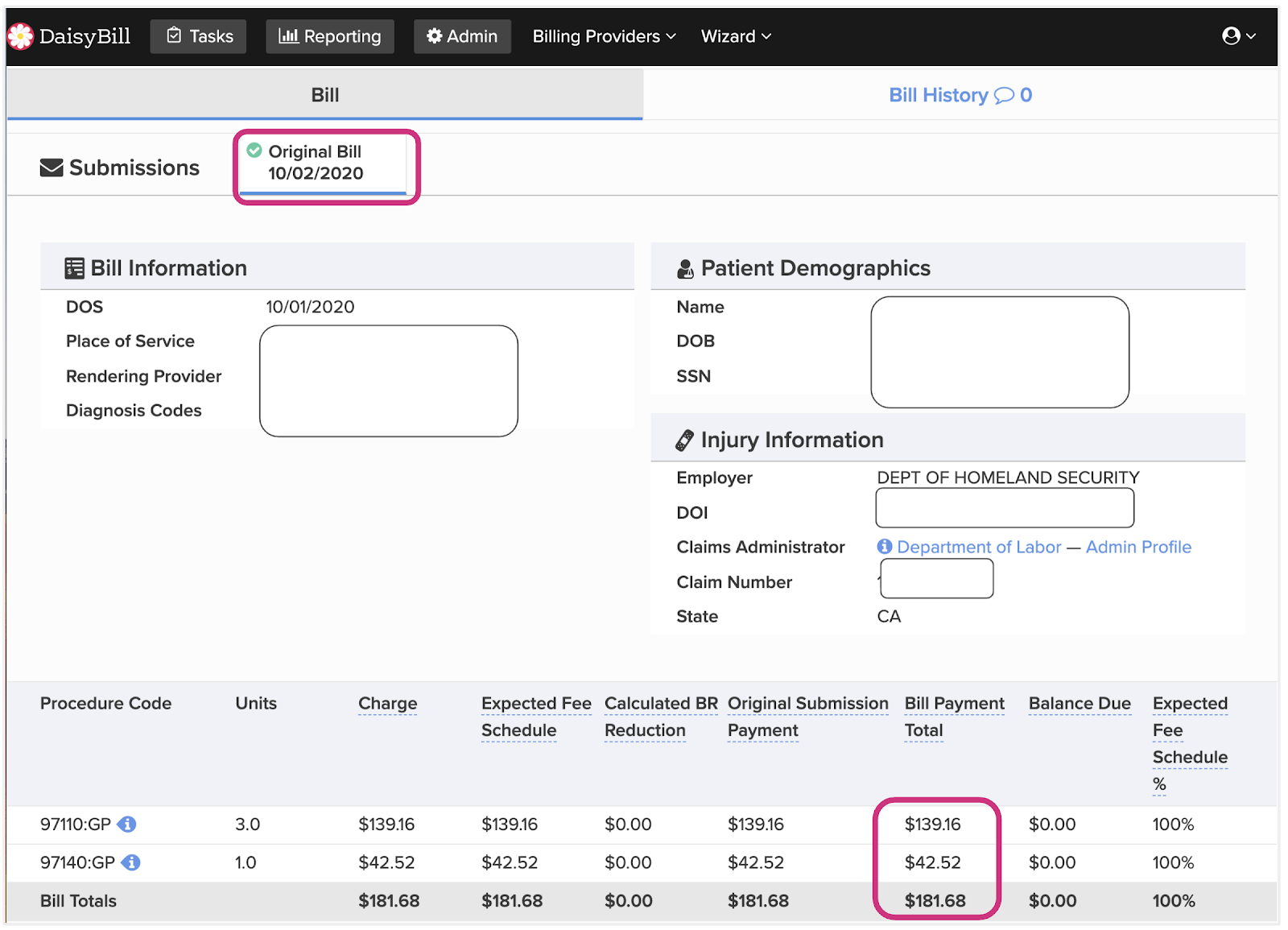 Hurray for Our Department of Labor!

This is how your tax dollars should work. Efficiently, compliantly, and for the good of all parties, whether employer, injured worker, or provider. We applaud the DOL for its implementation of e-billing, which should serve as a model for all in the workers’ comp community.

Join the e-billing paradise and sign up for DaisyBill :)

Warning: Do Not Accept Credit Cards as Payment

In the past we have written a number of posts (including one about Broadspire) warning providers to not accept credit card payments issued by payers such as claims administra...

The California law regarding electronic explanations of review (EORs) is crystal clear and completely unambiguous -- at least to the vast majority of the workers’ comp commun...