How MPNs Are Hurting Workers’ Comp

Last week on the blog, we argued that the RFA system in California workers’ comp is broken – it’s failing providers, and it’s restricting injured employees’ access to care. Of course, you could say that about a lot of pieces of the workers’ comp system. Another example? Medical Provider Networks, or MPNs.

What, exactly, is an MPN? The California Division of Workers’ Compensation defines it as “an entity or group of health care providers set up by an insurer or self-insured employer and approved by the DWC’s administrative director.”[1]

Once the MPN is assembled, it is submitted to the DWC for approval. The DWC, in turn, maintains a website with a list of approved MPNs. This list takes the form of a 194-page PDF document, containing 2,332 MPNs across the state. There’s no way to sort or search the PDF.

That’s a problem for California physicians. After navigating a harrowing authorization process, the last thing doctors need to worry about is which of the 2,300+ MPNs that the DWC has on file is used by a particular employer or insurer.

To make matters worse, employers and insurers manipulate this MPN system by setting up multiple MPNs and by adding and removing physicians without notice – the list of “approved” physicians is constantly changing, often unbeknownst to the providers themselves.

Since all treatment requires authorization by the employer, MPNs serve no discernible purpose except to restrict the injured worker’s physician choice and deny payment to treating physicians who do not belong to the MPN in question. We hear too many stories of physicians receiving authorization, performing services, and subsequently being denied payment due to MPN membership. Or, providers receive authorization contingent on delivery by an MPN physician – which means that the physician must somehow try to determine which of the 2,300 MPNs is applicable, and whether they’re a member. Suffice it to say that this is a Sisyphean task.

Without major reforms, MPNs are just another blockage in the clogged up pipe of California workers’ compensation.

The DaisyBill Work Comp Wizard, which includes six powerful tools for workers’ comp billing, includes a sortable, searchable version of the DWC’s MPN list. Whenever possible, we include a link to the MPN website. Consider it one more way in which DaisyBill makes work comp simple. 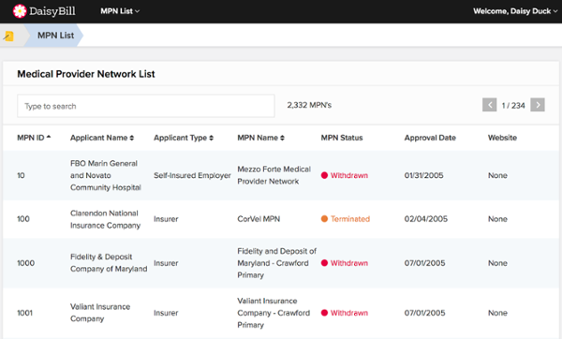 In our most recent webinar, California Workers’ Comp Telehealth Made Easy, we reviewed the Medicare and California Division of Workers’ Compensation (DWC) rules for providing...

Costco, Home Depot, & Other Employers Should Be Mad as HEL*

Recently a provider shared a letter, apparently meant to intimidate, that it received from a Liberty Mutual Network Specialist, Peter Spalding. The letter threatened to kick ...