Sedgwick failed to comply with an Independent Bill Review (IBR) ruling for almost four months. Worse, the payor’s brazenness is likely to go unpenalized by the state.

But after months of subsequent outreach from DaisyBill on behalf of the provider, Sedgwick had failed to remit a dime. Finally, Sedgwick paid on June 21, 2021, a full 106 days late.

Even more incredible is Sedwick’s excuse.

Sedgwick claims to have mistakenly sent the provider’s reimbursement to Maximus, instead of the provider. It’s difficult to decide what this explanation strains more — our credulity, or our faith in Sedgwick’s basic competence. Either way, Sedgwick’s behavior surely strains the limits of what the state will tolerate from payers.

How far can Sedgwick go before experiencing consequences? How much compliance can California providers expect from claims administrators when the rules are not enforced?

Sedgwick also denied payment after the provider submitted a Second Review appeal. Subsequently, the provider requested IBR from Maximus, remitting the $180 filing fee and submitting documentation that showed Sedgwick’s improper denial for the farce it was.

It was an open and shut case, in the provider’s favor.

Maximus overturned Sedgwick’s denial. The Analysis and Finding portion of Maximus’ Letter of Final Determination is displayed in part below. 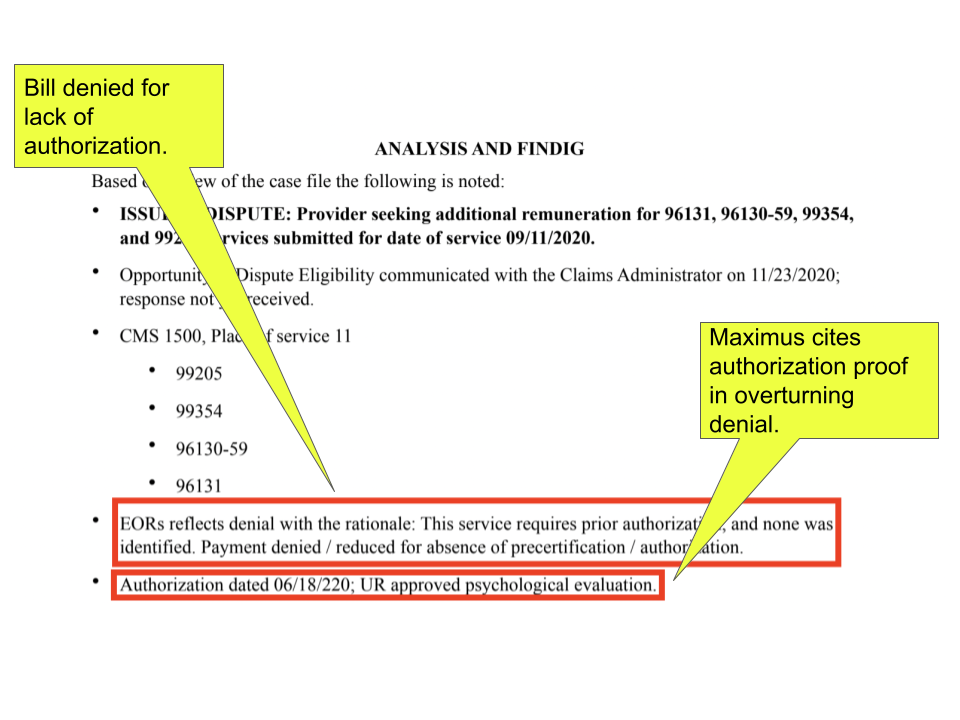 Per Maximus’ IBR decision, Sedgwick had 45 days from the date of the Letter of Final Determination to remit the amount the provider billed, plus the $180 filing fee. Payment was therefore due to the provider by March 7, 2021.

On March 10, DaisyBill called Sedgwick on the provider’s behalf. This would be the first of 10 times DaisyBill reached out to Sedgwick, the Sedgwick adjuster assigned to this bill, or the adjuster’s supervisor.

Below is a timeline of our efforts to collect from Sedgwick, which were met with silence for months. We did not hear back from Sedgwick until 100 days after the date payment was due.

The most disheartening part of this ordeal is Sedgwick’s claim of having sent reimbursement for the services billed (but not the IBR filing fee) to Maximus, rather than the provider.

This despite the fact that the Letter of Final Determination states explicitly that reimbursement is due to the provider:

Not that the above instructions should be necessary; Sedgwick has been on the wrong end of Maximus “Overturn” decisions countless times before, and has no excuse for being unaware of where to send payment.

Also notable is the date Sedgwick claims to have issued payment to Maximus: December 4, 2020, weeks before Maximus issued their Final Determination.

Abuse of the Workers’ Comp System?

We cannot claim to know what goes on within Sedgwick’s organization, but it is impossible to decide which of the only three possibilities is worse. Is Sedgwick:

What does it say about a claims administrator when it (supposedly) remitted disputed reimbursement before IBR is concluded, despite having twice denied reimbursement?

What does it say about a claims administrator when the personnel responsible for compliance are unreachable?

What does it say about a claims administrator when, 100 days after payment was due to the provider, they claim not to know how IBR payment works?

On this blog, there’s a great deal we can’t say. But we can certainly ask.

DaisyBill makes authorization, billing, and appeals quicker, easier, better. Contact us to learn how our software and services can help your practice.

May 18, 2022 3 min read
Sedgwick Resolves LA County Missing e-EORs
daisyBill contacted Sedgwick regarding e-bills for treatment rendered to employees of the County of Los Angeles (claims beginning with 5000 or ending in D), for...