LWP Claims Solutions can’t seem to find the will or the way to comply with California workers’ comp law, which requires LWP to properly accept and pay electronic bills submitted by providers who treat injured workers.

Our attempts to work with LWP and Data Dimensions produced only apologies and commitments to fix the problem, but little compliance. Unfortunately for doctors, empty promises are no substitute for payment.

Below we summarize the 7,112 Audit Complaints daisyBill filed with the Division of Workers’ Compensation (DWC) to report the Third-Party Administrator (TPA)’s abject failure to process providers’ compliant e-bills.

daisyBill has invested significant time and resources in reporting all of the above-noted e-billing failures to LWP and Data Dimensions. We have shared copious amounts of relevant data, and given LWP every chance to get its act together — to no avail.

As such, daisyBill has no choice but to submit 7,112 formal Audit Complaints to the DWC.

Within 2 working days of receiving a provider’s e-bill, the claims administrator must return an X12 277 Acknowledgement (277 ACK) indicating whether the e-bill is rejected or accepted for processing. Most claims administrators employ a clearinghouse to fulfill the 277 ACK requirement, and to otherwise receive and respond to e-bills on their behalf.

For 1,750 e-bills, LWP/Data Dimensions returned a 277 ACK rejecting the e-bill, citing “Claim Not Found.” In other words, the 277 ACK indicates that Data Dimensions/LWP could not match the claim number on the e-bill to any existing LWP claim number.

Except, for 851 of the 1,750 bills for which the 277 ACK cited “Claim Not Found,” daisyBill has at least one e-bill that LWP paid — for the same exact injury and claim number.  In other words, LWP is refusing  to process (at least) 851 e-bills by paradoxically asserting that LWP cannot identify the injury claim.

In the single example below, daisyBill software shows that LWP paid 55 bills for an injury claim. Yet, LWP sent the provider a 277 ACK rejecting the e-bill by falsely asserting “Claim Not Found.” 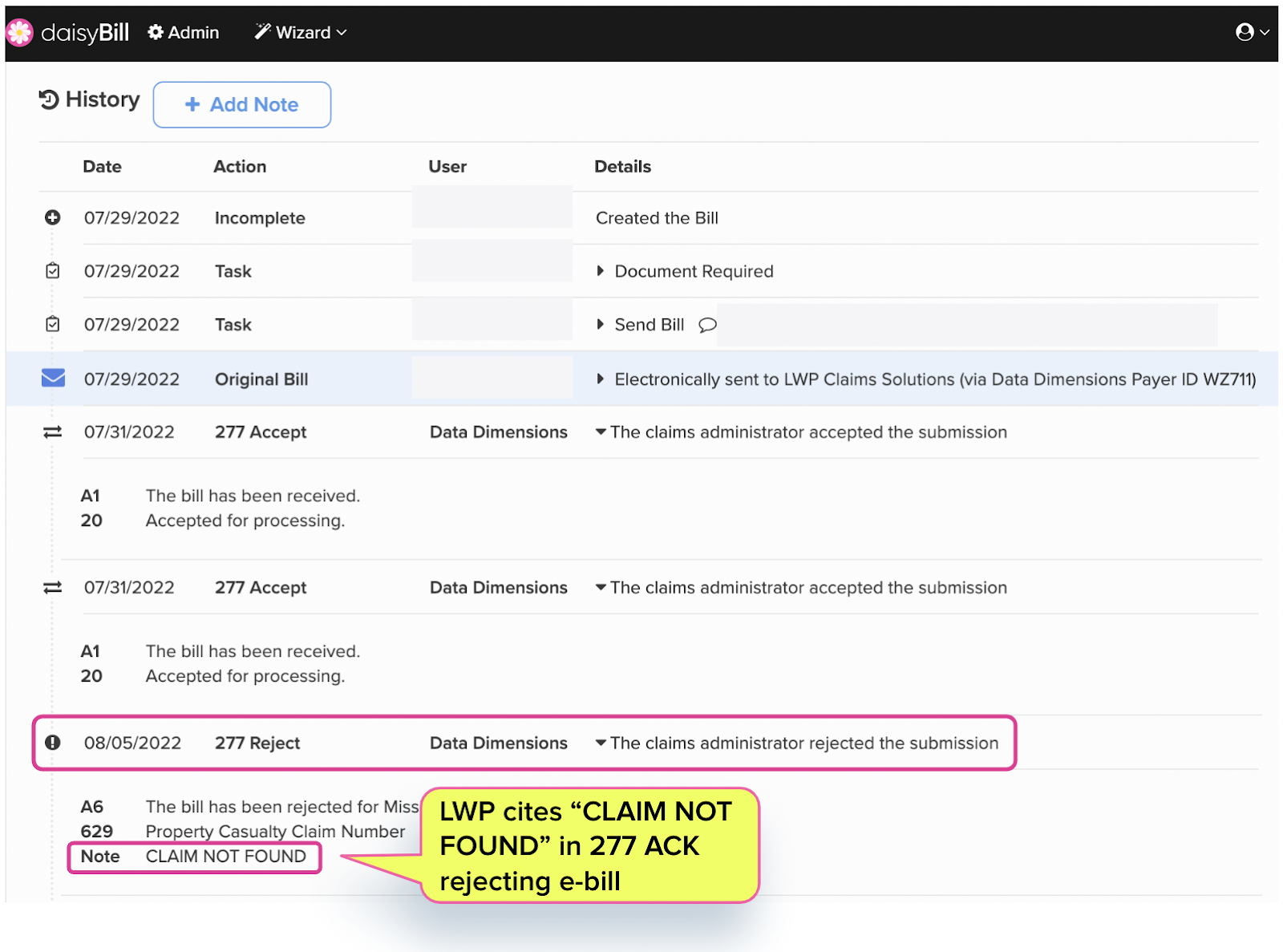 This is a sort of double-non-compliance. Not only is it absurd to reject an already-accepted e-bill, but the improper rejections were also issued untimely (more than two days after receipt of the e-bill). Below is just one example: 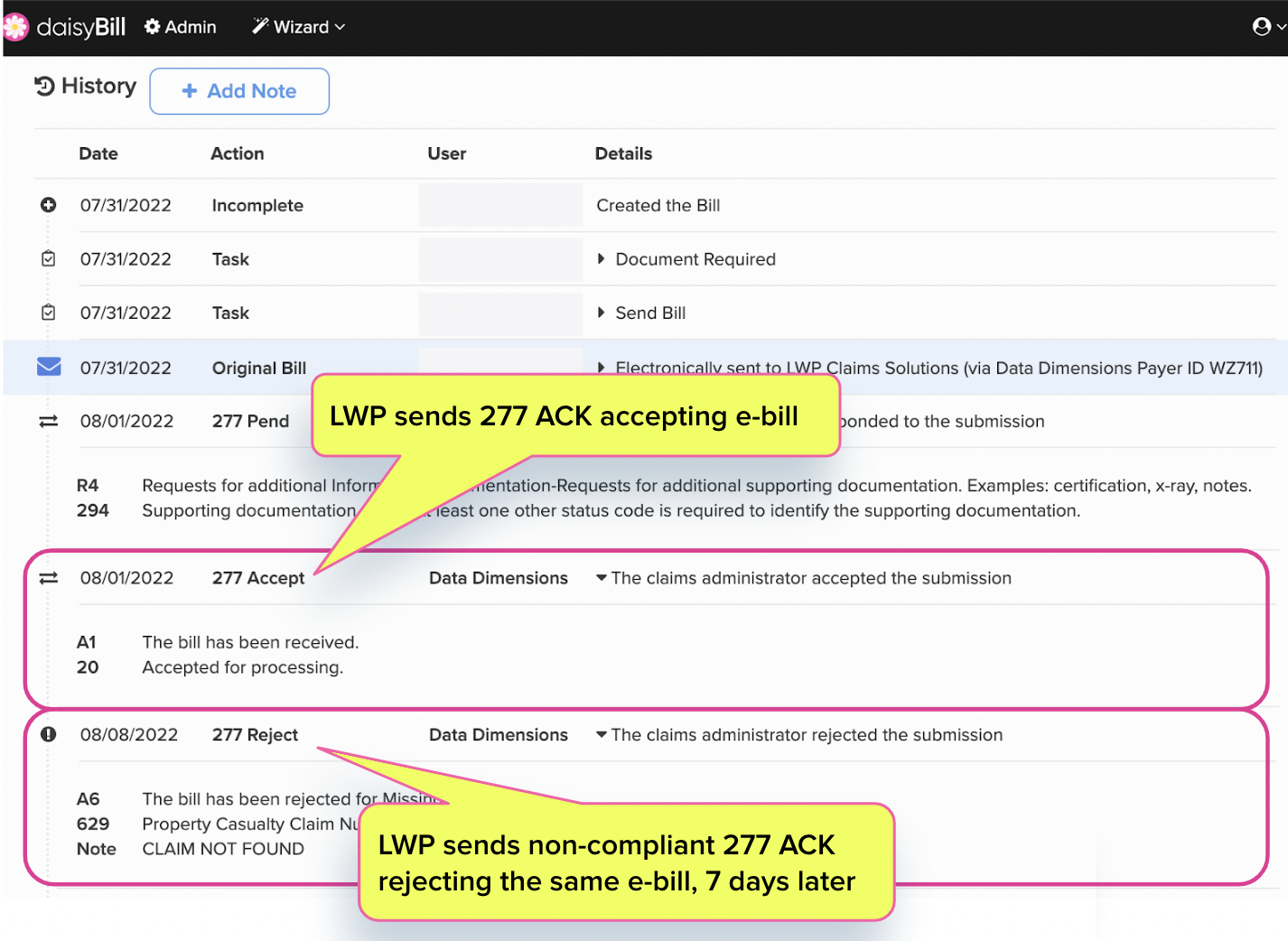 Let’s be very clear: a 277 ACK does not function as an Explanation of Review (EOR).

The purpose of the 277 ACK is simply to alert a provider whether the claims administrator accepted or rejected the e-bill submission for processing. The DWC allows claims administrators and their clearinghouses to reject e-bills for only a strictly defined set of (mostly technical) reasons:

The above list is not subject to interpretation. Either the e-bill is a technically compliant submission for a covered claim, or it isn’t. Questions of medical necessity, authorization, diagnoses, etc. are the purview of bill review.

Yet, LWP returned 277 ACKs rejecting 339 valid e-bills, listing reasons such as “medical necessity for service,” “authorization exceeded,” and “diagnosis code.” Theoretically, these may be valid grounds for disputing charges on an accepted e-bill, but they are not valid reasons to reject an e-bill submission for processing.

This is more than a technical failure. It is a backdoor payment denial the provider cannot appeal.

To submit a Second Review appeal or request Independent Bill Review (IBR) for an improper denial or adjustment, the doctor needs the EOR. By rejecting the submission with this invalid 277 ACK, LWP precludes any recourse for the doctor to pursue correct payment.

In the example below, the improper 277 ACK rejects the e-bill by citing “Service not authorized.” 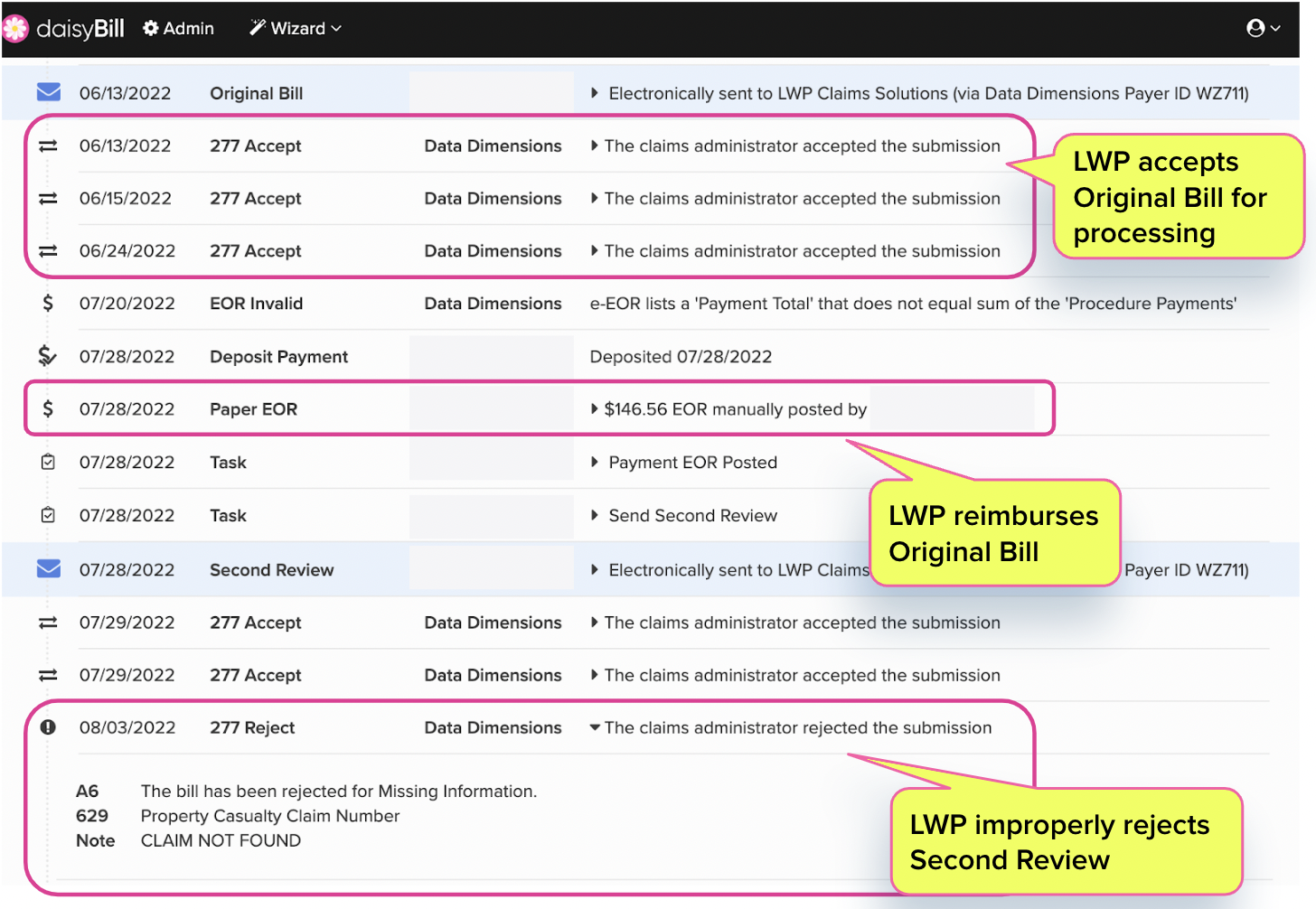 By law, when the provider submits a bill electronically, the claims administrator must timely (within 15 working days) return the EOR electronically, in the mandated X12 835 file format.

This allows the provider’s e-billing software to receive the EOR data, post payment, and close the loop on the whole transaction. Without an e-EOR, the provider’s system does not have the information necessary to ensure that the claims administrator’s adjudication and payment was accurate, timely, and otherwise compliant.

In 1,960 cases, LWP returned e-EORs that were missing key information, contained incorrect information, and/or featured charge and payment amounts that literally didn’t add up. These e-EORs are of no value whatsoever to the providers.

In the example below, LWP’s e-EOR sent to a provider features the wrong payee, and is littered with math errors. 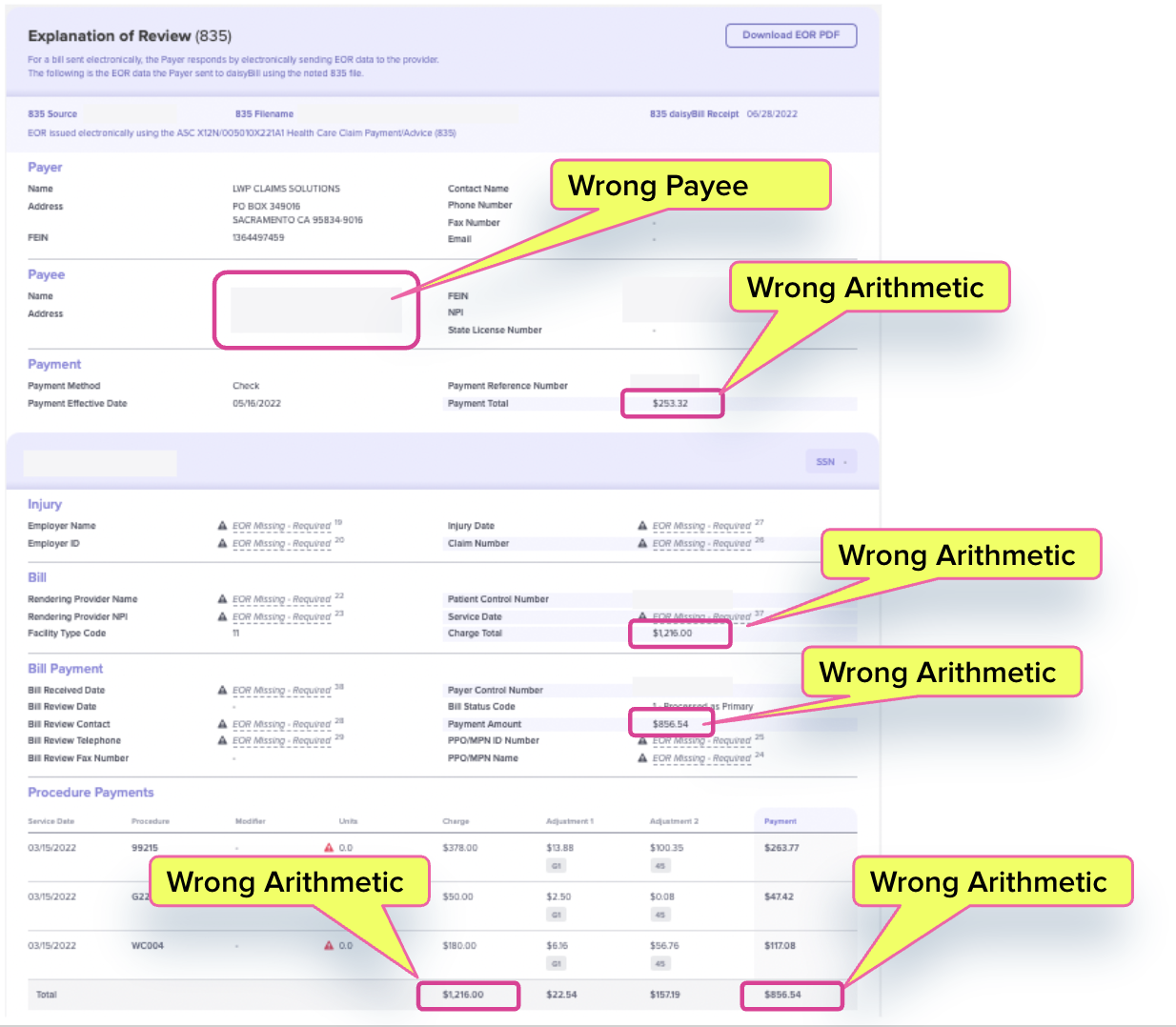 As we detailed in this article, daisyBill did not simply report the issues described here to the DWC at the first sign of trouble. Our submission of 7,112 Audit Complaints followed months of patient, but ultimately fruitless outreach to LWP and Data Dimensions.

Providers and payers working in good faith can navigate the challenges of e-billing together, with forbearance on both sides for the occasional technical difficulties. But at some point, resolving persistent non-compliance requires more than polite requests from your friendly neighborhood e-billing software provider.

LWP is proof that California needs regulators to impose consequences.

daisyBill fights the good fight on behalf of workers’ comp providers. Reach out to see how we can help your practice obtain fast, correct reimbursement for treating injured workers.