SB 537 incorrectly presumes there is an analogy between workers’ comp and Medicare. While the assumption seems understandable, it reflects a common misunderstanding that workers’ comp care is like other medical care.

It most definitely is not. California workers’ comp is heavily regulated, and these regulations impose greater and also different types of responsibilities and costs on providers and providers’ staff.

Last week I wrote about California Senate Bill 537 and how this bill implicitly and incorrectly sets up Medicare as the standard for reimbursing providers for treating injured workers. That article piqued a lot of interest and, as a follow-up, I’d like to provide some context for the reason we believe SB 537 is bad for workers’ comp.

In a WorkCompCentral article by Eddie Curran, Therapist-Backed SB 537 Takes Aim at Provider Networks, Rick Katz of the California Physical Therapy Association (CPTA), who participated in drafting the legislation, explains the issue that SB 537 attempts to address:

The problem.. is that physical therapists had “to put some kind of floor on the fee schedule … to have some kind of bottom” to keep the networks from continuing to drive down their reimbursements.

…[T]he CPTA chose to use Medicare’s reimbursement schedule because it felt that legislators are familiar with Medicare and could better grasp the proposal.

While understandably frustrated by the networks--a frustration that we here at DaisyBill share--the proposed reimbursement floor is essentially arbitrary and fails to take into consideration the additional work required by physicians and physician staff to treat California’s injured workers.

In formulating the Official Medical Fee Schedule (OMFS), regulators and the Department of Workers’ Compensation recognize the significant burden placed on physicians by workers’ comp laws and regulations.  Accordingly, the OMFS reimbursement exceeds Medicare reimbursements for the same treatment.

While the CPTA and DaisyBill are on the same page with respect to the wider debate, DaisyBill is concerned by any arbitrary erosion of the OMFS and the potential inadequacy of California reimbursements for care provided to injured workers.

Mr. Katz proposed that members of CPTA sit down with DaisyBill to look for a solution that would address our objections. Similar to the analysis above, we think a good solution to the physical therapy network problem is for physical therapists to analyze the additional work required to treat workers’ comp patients compared to Medicare patients. Subsequent to that analysis, instead of an arbitrary floor, physical therapists should demand appropriate payment from the networks for treating injured workers.

We Urge You to Contact Both Your Senator and the Bill’s Sponsor, Senator Gerald Hill

Express your opinions on SB 537 by contacting your senator, whose name and contact information you can find here. Or, if you already know your senator’s name, you can contact your senator through the California State Senator Roster website.

Also submit your comments about this bill to its sponsor, Senator Gerald Hill, by either: 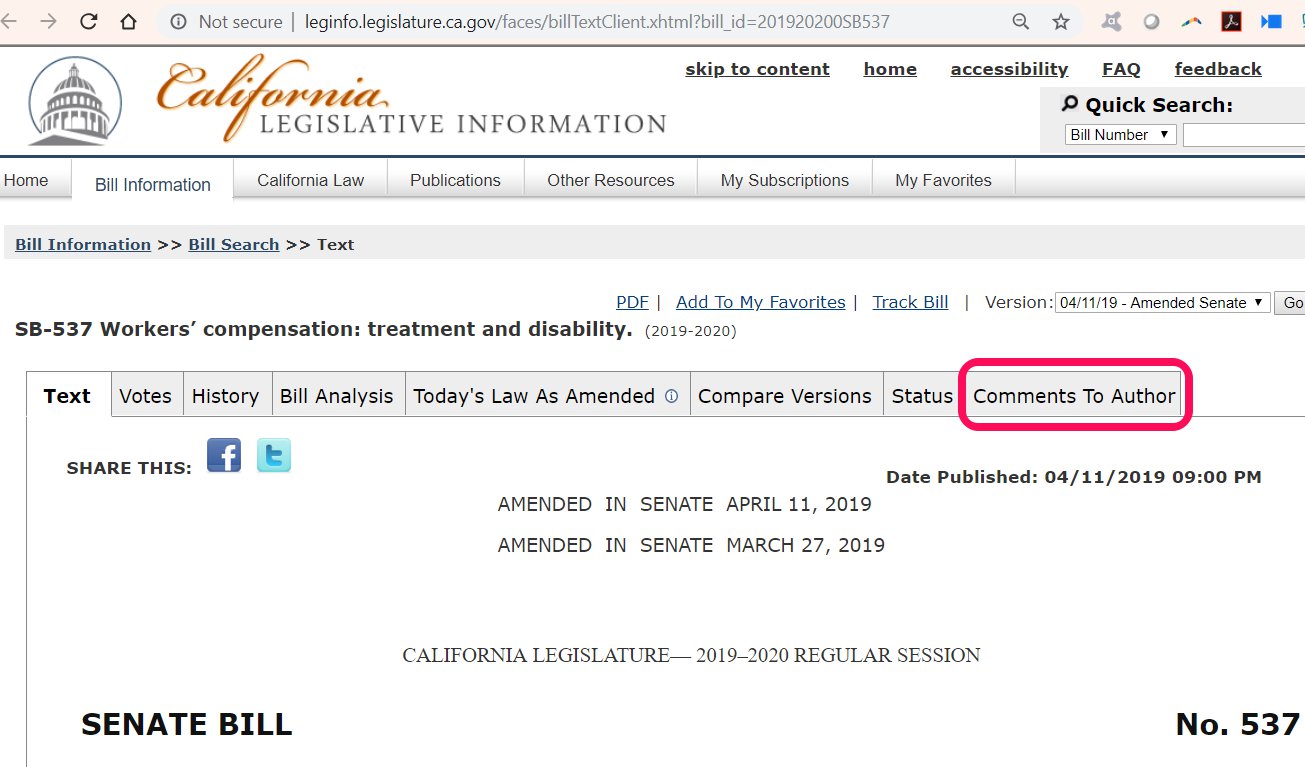 Sign up for DaisyBill’s emails to stay up-to-date on workers’ comp news and developments.

Let's Make This Clear: Workers' Comp Is Not Medicare

A recent post by Joe Paduda perpetuates the common but incorrect practice of analogizing workers’ comp to Medicare. In his discussion, Paduda notes that Medicare pays much le...