Zurich: Triples Down on Foul Play

Clearly Zurich fears no recourse as it continues to systematically ignore rules while stripping California providers of proper reimbursement. In this latest development, Zurich continues to refuse to obey actual laws, regulations, and rules (as opposed to making up its own). Now, Zurich triples down by denying payment for Second Review appeals -- appeals that were filed: 1) in response to original bills that were incorrectly denied by Zurich; and 2) despite Zurich’s incorrect appeal directions.

Zurich’s denial of providers’ Second Review appeals forces providers to pay $180 to submit an Independent Bill Review (IBR) within thirty days of receipt of the denial. If a provider fails to submit a timely IBR, Zurich is allowed to keep the providers’ denied reimbursements.

Zurich acts as though there are no consequences for claims administrators in California that repeatedly and noncompliant refuse payment to providers who treat injured workers.

To the detriment of the entire workers’ comp system, Zurich is not wrong. In seeking to maximize its own profits, a claims administrator has no fear of consequences when it chooses to circumvent workers’ compensation law and deprive a provider of reimbursement mandated by California law.

Strike One: On 9/29/2020 DaisyBill reported that Zurich was incorrectly denying California workers’ comp bills by citing the untimely filing of the bills. Specifically, Zurich denied bills submitted after 30 days from the date of service, even though there is absolutely no regulatory justification for doing so. (For full details: URGENT: Zurich Refusing to Pay Providers for Treating Injured CA Workers)

When a provider follows Zurich's incorrect instructions, instead of pursuing the correct route of submitting a Second Review appeal, Zurich is allowed to keep the provider’s denied reimbursement. (For full details: Zurich Further Jeopardizes Providers' Payment With Incorrect Appeal Instructions).

Employers and their injured employees are the true victims of Zurich’s repeated “errors” and apparent foul play. The payment abuse that Zurich inflicts on providers is precisely the reason many thousands of providers refuse to treat injured workers, as the struggles to receive payment seem unmanageable.

Because there are ZERO repercussions for Zurich’s noncompliant refusals to reimburse providers who treat injured or sick workers, and because we presume that Zurich knows this, it’s hard not to draw some ugly conclusions: that Zurich’s actions are deliberate, rather than innocent errors, in a sustained campaign to increase revenue by not properly paying for treatment provided to injured workers: 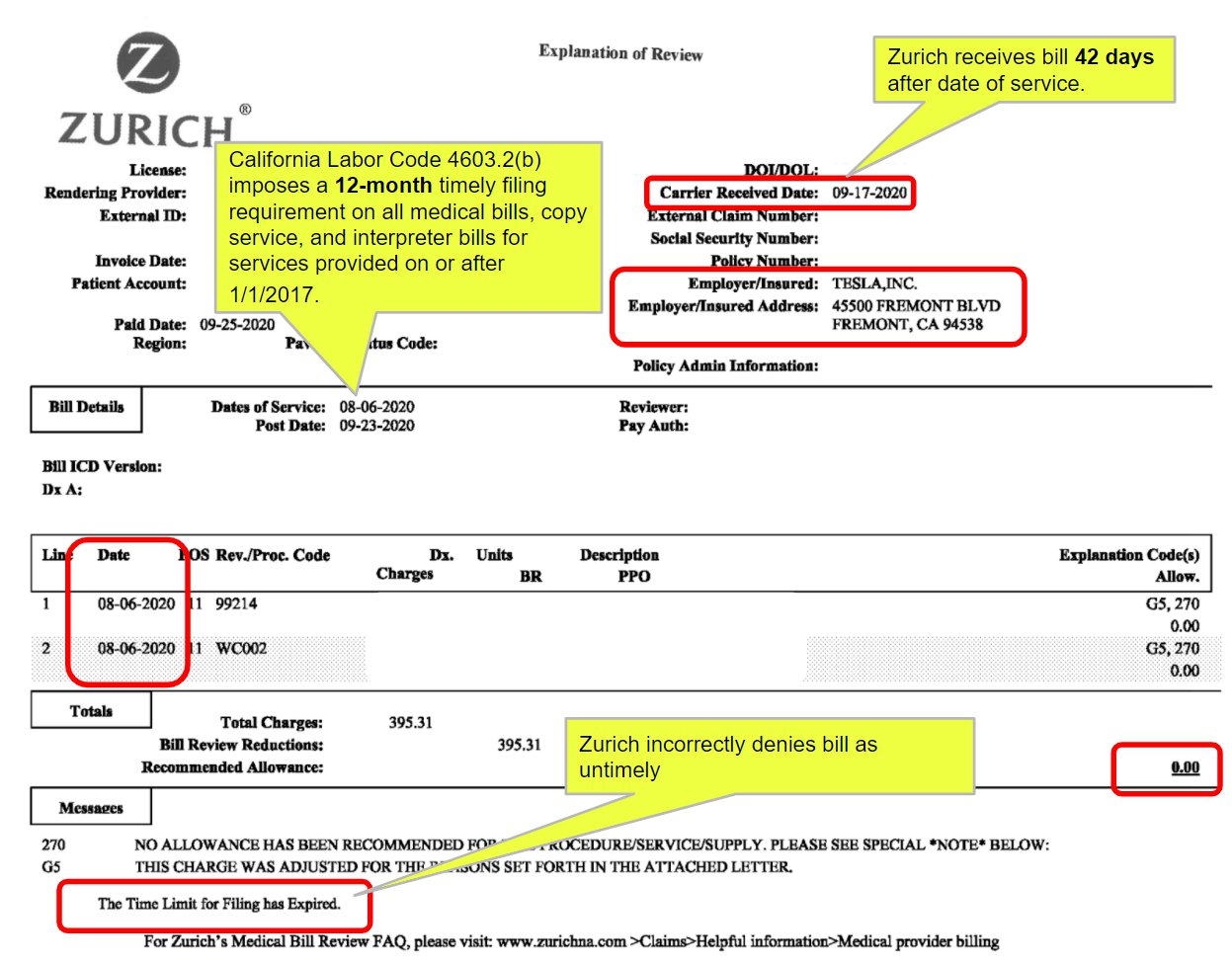 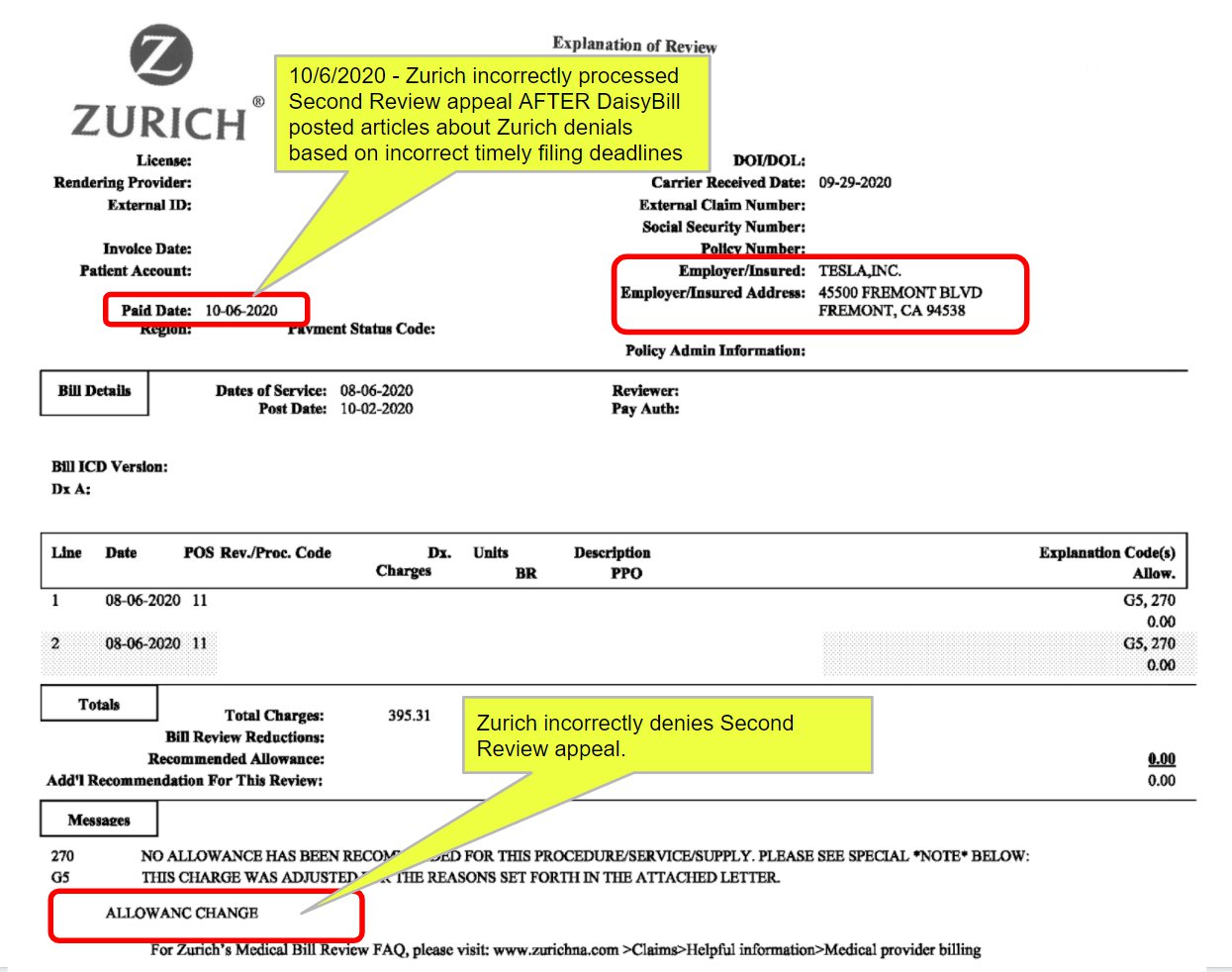 Zurich’s denial of the Second Review appeal leaves the provider only two options:

If a provider fails to timely or compliantly file either the Second Review appeal or the IBR, California law deems the bill paid in full; no further payment is due.

As more evidence of a sinking system, compare the nonpayment consequences inflicted upon providers to the complete lack of consequences that claims administrators apparently enjoy when these payers ignore California laws.

Zurich demonstrates the ease with which a claims administrator can both ignore and corrupt California workers’ compensation laws with no expectation of repercussion. By denying the Second Review appeal, Zurich continues grinding providers down until they can no longer justify the expenditures of resources to demand reimbursement justice.

For providers, sometimes it can seem just too difficult to get paid for doing their jobs. Make it easier by joining the community of DaisyBillers, using our collective data and strength to make the whole system better.

DaisyBill recently broke the story (after receiving multiple reports from the DaisyBill community and beyond) that Zurich has improperly denied California providers’ bills fo...