A doctor treated a California injured worker. Subsequently, in an apparent attempt to avoid paying for the treatment, the State Compensation Insurance Fund denied both the doctor’s bill and appeal by falsely stating that the doctor’s documentation failed to support the treatment.

The doctor paid $180 and filed for Independent Bill Review (IBR) to dispute the false denial, and SCIF finally agreed to pay —  before Maximus issued the IBR decision.

To be clear: after denying bill payment twice, rather than waiting for an IBR decision, SCIF paid the doctor the amount owed for treating the injured worker.

Then, rather than penalizing SCIF for the false denials, the California Division of Workers’ Compensation (DWC) rewarded SCIF by declaring the doctor’s IBR as ineligible. This ineligible ruling by the DWC means Maximus cannot issue an IBR decision.

Without an IBR decision, the doctor cannot recover all of the $180 IBR fee that SCIF forced the provider to pay due to the false denials. Since the DWC ruled the dispute ineligible, SCIF pays $0 of the IBR filing fee, Maximus refunds the doctor $132.50, and the doctor is out $47.50 —  in addition to the enormous administrative costs of the doctor’s multiple appeals.

This DWC IBR ineligible decision rigs the IBR process to guarantee SCIF is not penalized for falsely denying payment to doctors who treat injured workers. Claims administrators can now refuse to pay workers’ comp doctors without fear of penalty or punishment, as follows:

Remember, if the doctor failed to pay the $180 IBR fee to dispute the duplicitous denials, California law allows payers to keep the doctor’s reimbursement for treating the injured worker.

California employers, do you ever wonder why doctors refuse to treat your injured employees? The answer is very simple: California laws and regulators actually reward the duplicitous payment abuse inflicted on doctors by SCIF and other workers’ comp payers.

After treating the injured worker, the doctor submitted a bill to SCIF, that included the copious documentation required by California regulations.

SCIF refused to pay the doctor for the treatment.

SCIF denied payment by falsely asserting that the documentation attached with the bill did not support the treatment. Below, SCIF’s Explanation of Review (EOR) displays the faulty reasoning behind False Payment Denial #1.

California law mandates that SCIF is allowed to keep the doctor’s reimbursement, unless the doctor submits a Second Review appeal within 90 days of False Payment Denial #1.

Accordingly, the doctor’s staff submitted a timely and compliant Second Review to SCIF to dispute False Payment Denial #1. In its detailed appeal, the doctor’s staff directed SCIF bill reviewers to the exact page of the documentation that was submitted with the original bill that supports the service being denied.

Moreover, the doctor’s appeal referenced a previous bill with the exact same charges and documentation, which SCIF had paid, as further proof of SCIF’s error.

Regardless of the evidence patiently laid out by the doctor, SCIF refused to pay the doctor and issued False Payment Denial #2. 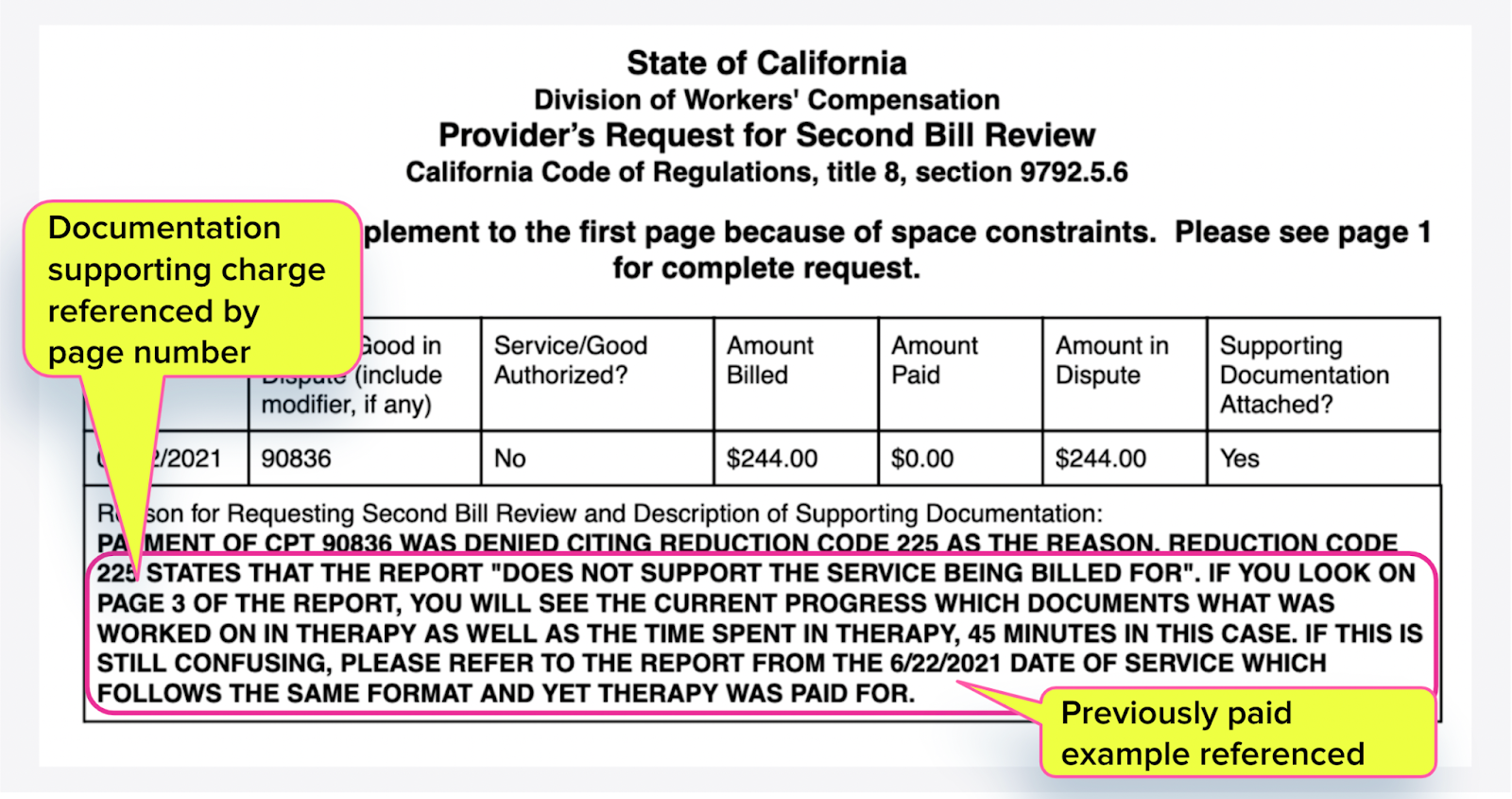 California law mandates that SCIF is allowed to keep the doctor’s reimbursement, unless the doctor pays $180 to timely submit a request for Independent Bill Review (IBR) within 30 days of receipt of False Payment Denial #2.

SCIF did not wait for Maximus to issue an IBR decision. Instead, once the doctor paid the $180 IBR fee, SCIF reversed its previous false denials and issued payment to the doctor; an inexplicable (but totally explicable) ‘payment epiphany.’

How the DWC Rigged IBR

Unfortunately for employers and their injured workers, claims administrators throughout California may engage in wanton provider payment abuse without threat of any penalty.

Completely putting aside every principle of regulatory enforcement and deterrence of misbehavior, the California DWC has rigged IBR to guarantee that doctors always lose the game of “IBR Chicken.” The winning strategy for claims administrators is clearly to reimburse the provider before Maximus issues an IBR decision.

If the provider perseveres and manages to pay $180 to file for IBR, the claims administrator can simply issue payment, so that the DWC will rule the IBR as ineligible, as shown below: 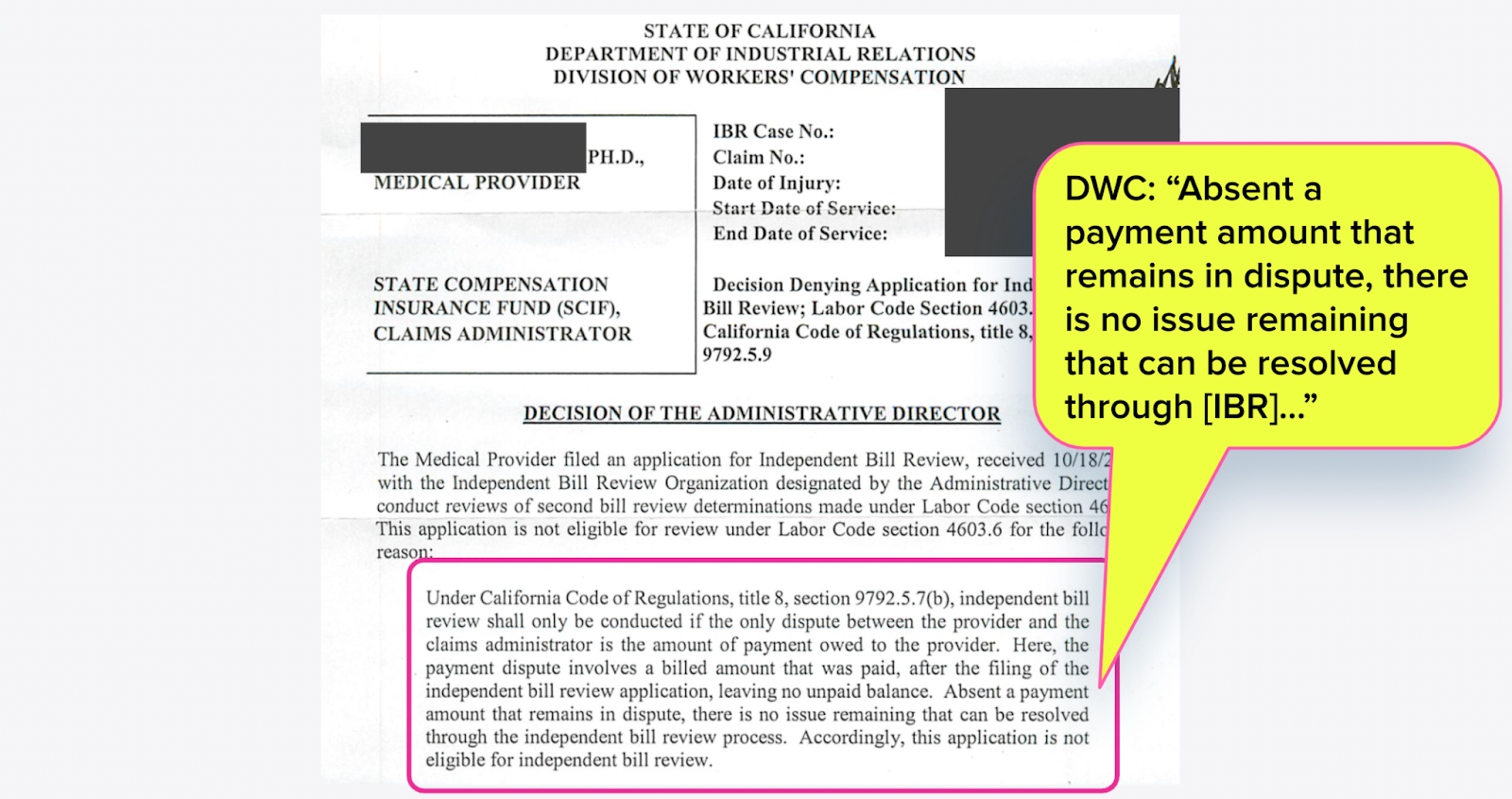 In the past, we’ve seen payers (including SCIF) pay up only after the doctor paid $180 to file for IBR.

This time, the DWC allowed SCIF to retreat safely, deeming the case ineligible, and excusing SCIF from the consequences of their improper (read: false) payment denials. Imagine someone committing grand larceny, getting arrested, then returning the stolen property before the trial begins. Could the defendant then ask the judge to throw out the case?

Fact #1: SCIF owes this provider more than the falsely denied payment amount. This provider expended enormous amounts of administrative resources and money to chase down reimbursement from SCIF. Accordingly, IBR should determine that SCIF owes penalty and interest payments, as well as restoration of the $180 IBR filing fee that SCIF’s actions forced the doctor to pay.

Fact #2: Laws without enforcement are no laws at all. Compliance cannot exist in the absence of consequences. The point of consequences is not to inflict suffering on the offender for suffering’s sake; penalties are meant to deter future offenses.

With this ineligibility decision, the DWC has declared that erroneous, improper, or even purposeful attempts to withhold reimbursement (aka theft) are permissible.

Claims administrators can falsely deny or incorrectly pay providers with zero threat of repercussions or penalties.  At best, the doctor will fail to timely file the necessary appeals, and the payer wins the game of IBR Chicken, free to walk away with stolen revenue.

At worst, the claims administrator can simply pay the doctor after the doctor requests IBR.

The daisyNews team would like to thank the daisyBill client who alerted us to this disastrous decision, so we could share it with our readers. With this incredibly ill-advised move, the DWC sends a dangerous signal to payers, and offers a free pass to any payer inclined to improperly — even knowingly — fail to reimburse correctly.

Even before this decision, California workers’ comp payment laws were contorted to favor the payer, inflict payment abuse on doctors, and decimate the number of doctors willing to treat injured workers. After this decision, employers should be very frightened indeed.

Make it harder for claims admins to improperly deny payment. Your office deserves full reimbursement, on time. daisyBill has the tools — reach out to learn more.

CA Med-Legal: How to Bill for 10K+ Pages/Units of MLPRR
02/10/2022 • 4 min read
Subscribe to daisyNews
Workers' Comp Guides, Updates, and Insights
Thanks for subscribing to daisyNews!
Related Articles