Recently, a DaisyBill provider disputed a reduction in reimbursement from the City and County of San Francisco (CCSF) for treating an injured employee. In the Explanation of Review (EOR) CCSF sent to the provider, CCSF justified taking 10% from the reimbursement by citing a First Health PPO contract.

CCSF’s reasoning has one glaring issue: According to Coventry/First Health, they cannot locate a contract between this provider and First Health.

Worse, CCSF assured California’s Division of Workers’ Compensation (DWC) that the provider signed the contract in question. Despite CCSF providing no documentation or other proof of this nonexistent agreement, the DWC took CCSF at its word.

The Dangers of PPO Discounts

We have written extensively about how payers use Preferred Provider Organization (PPO) contracts to hustle workers’ compensation providers out of complete reimbursement. Payers simply apply a PPO contract name to the EOR and reduce the reimbursements to below those dictated by the state’s Official Medical Fee Schedule (OMFS).

In some cases, these PPO contracts force providers to accept an up to 30% reduction below OMFS reimbursement rates. Providers typically sign PPO contracts because they believe the PPO will direct more patients to the practice. However, PPOs do not direct patients to providers.

Once a provider signs a PPO discount contract, the discounts can be leased, sold and transferred to many different payers. Each of these payers can take money from a provider by simply citing the PPO contract name on the EOR. The payer and/or PPO keeps provider revenue, while providing zero treatment or services to injured workers.

Below, we walk through this provider’s ordeal, and take a close look at CCSF and its vendors’ arguably misleading representations in response to the dispute. This tale exposes the impunity with which claims administrators like CCSF use unverifiable PPO contracts to take advantage of providers and subvert California workers’ comp.

January 15 2021: The provider submitted a Second Review appeal to dispute the PPO reduction CCSF took. The EOR that CCSF sent the provider listed “First Health” as the PPO contract that allows CCSF to take a cut of the provider’s revenue.

In the Second Review appeal, the provider asserted that the provider does not have a PPO contract with First Health:

In the appeal, the provider invokes California Labor Code Section 4609 (c)(2), challenging CCSF to demonstrate its right to discount the provider's reimbursement.

"Per LAB 4609 § (c)(2), [the provider] has the right to request that City and County of San Francisco (CA) demonstrate its entitlement to pay [the provider] a reduced contracted rate. Once requested, the claims administrator must make this demonstration within 30 business days of receipt of the request. This letter serves as such a request.”

In responding to the Second Review appeal, CCSF ignored the provider’s request for documentation of its supposed discount rights. Rather than providing the requested First Health contract, CCSF simply denied the appeal, and continued to withhold full OMFS reimbursement.

February 19, 2021: EK Health — apparently a sidekick CCSF vendor — replied to Maximus on behalf of CCSF. EK Health told Maximus that the provider has maintained a contract with “Coventry/First Health” since 2004, and that Coventry/First Health will not share the contract with Maximus. With no other explanation, EK Health states that the network is “unable to share contract language as this can only be shared with the provider.” 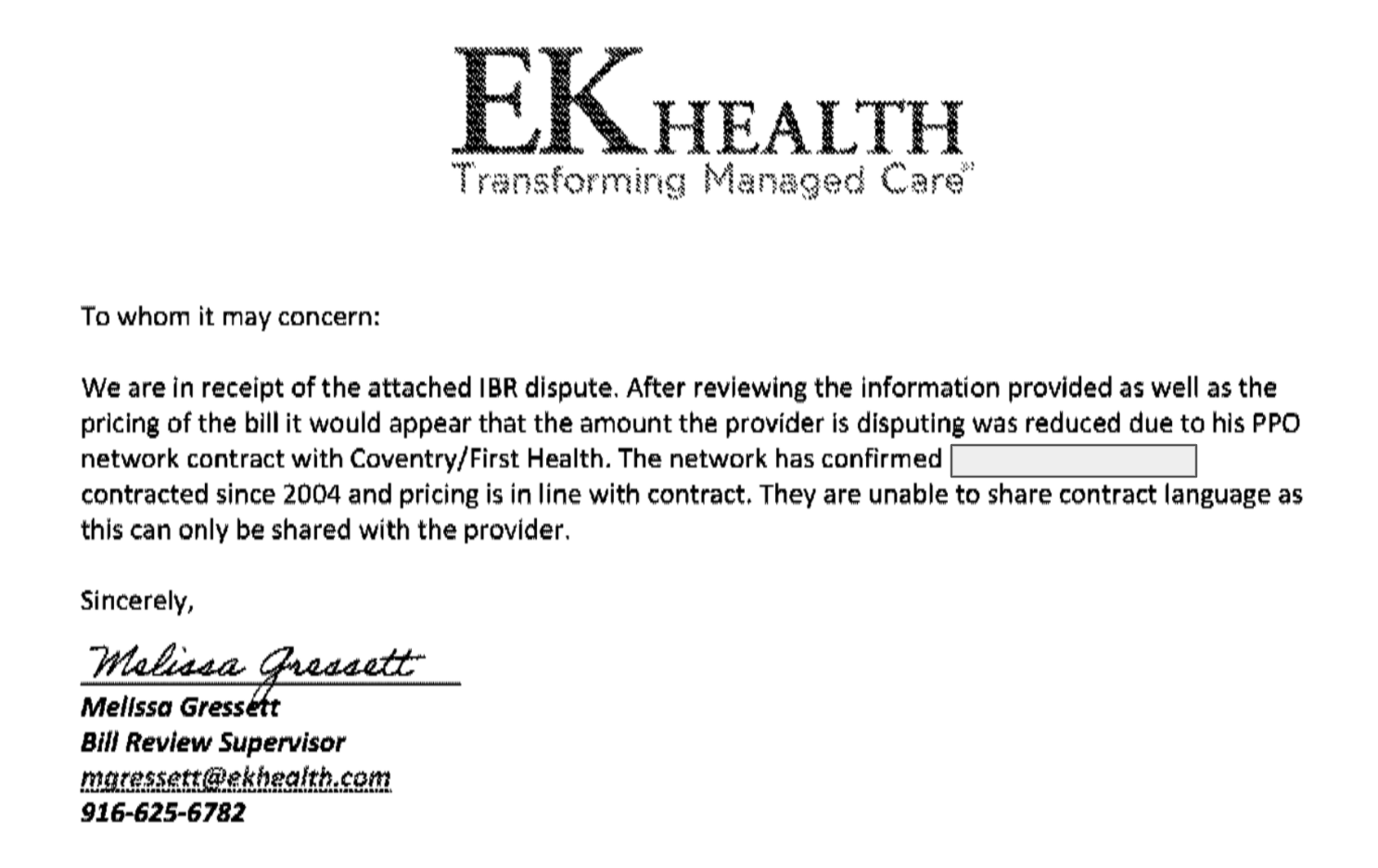 Despite having addressed this kind of contract dispute on multiple previous occasions, Maximus chose to refer the case back to the DWC.

March 8, 2021: The Administrative Director of the DWC (“AD”) sent the provider a letter stating that the dispute is ineligible for IBR. Specifically, the letter from the AD states “Here, the payment dispute involves the applicability of a PPO contract to the provider. This is not an issue that can be resolved through the independent bill review process.”

This decision by the DWC directly contradicts dozens of past decisions by Maximus on the exact same contract dispute issues.

"EORs reflect a PPO discount of 20%, Provider is disputing the PPO discount stating that there is no Contract with the PPO Network reflected on the EOR. The Assignment letter with a request for a copy of the Contract to support the PPO discount for DOS 08/05/2019 was issued to the Claims Administrator on 12/20/2019. Response not yet received. 72141 Overturned.”

"If the medical service is covered by a fee schedule adopted by the Division of Workers’ Compensation (DWC), for example treatment under the Physician Fee Schedule or an evaluation under the Medical-Legal Fee Schedule, or set forth in a contract for reimbursement (Labor Code section 5307.11), then SBR and IBR must be utilized to resolve the dispute within a matter of weeks, as opposed to possible years under the WCAB lien system."

March 24, 2021: In reference to a separate dispute regarding the same (supposed) contract, Coventry emailed the provider, admitting they cannot locate the contract in question. In the email, a Coventry representative acknowledged:

Pursuant to your request for a copy of the legacy Coventry Agreement (formerly First Health) effective 10/1/2004, please be we informed we are unable to locate this document in our archived files.

Even more alarming, Coventry’s email suggests the provider should continue to accept the discount "due to this matter has not been brought to our attention until the above topic was opened on 2/19/21.” This perversion of the English language is rivaled only by its perversion of logic. The provider should continue to accept reductions in exchange for what, exactly? 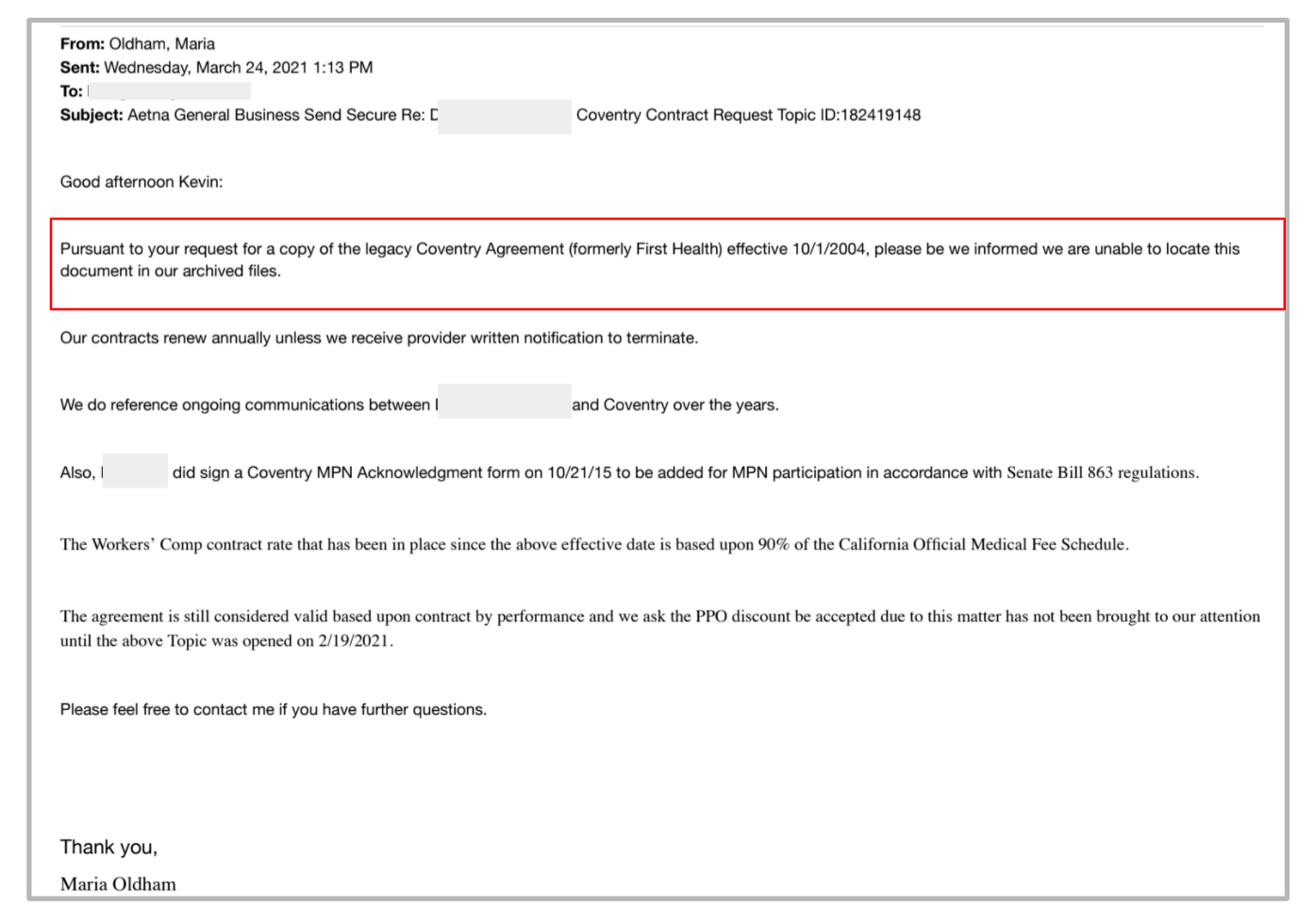 Despite the DWC’s clear error in declaring this dispute ineligible for IBR, the facts remain. CCSF, et al claimed an unearned PPO discount from a provider, and cannot substantiate their right to do so. We sincerely hope that DaisyBill is not the only party willing to take a closer look.

When claims administrators misbehave, DaisyBill has your back. Enjoy fast, accurate payment, easy appeals and more with our Billing Software. Contact us to learn more.

Ask yourself — what happens if you’re a year late paying a bill?Your credit score tanks? Your car is repossessed? Your home foreclosed on? In most walks of life...

In California, when submitting a bill for treating an injured worker, it’s imperative to include the correct documentation to support the treatment. If the provider fails to ...