California grants only two kinds of entities the authority to establish an MPN that restricts workers’ choice of doctors:

Typically, doctors know only the employer’s designated claims administrator, to which the doctor sends the bill. For that reason, we added another heap of helpful data to our free Claims Administrator Directory.

To assist doctors in determining whether they are included in an insurer or self-insured employer’s MPN, daisyBill combed through all 2,470 MPNs listed by the Division of Workers’ Compensation (DWC), and published our findings establishing which insurer/employer MPNs are associated with each claims administrator.

For the 593 California insurers, self-insured employers, and third-party administrators (TPAs) billed by our providers, the Directory now includes information for all known associated MPNs, where applicable, including:

Read on to learn how to use this searchable workers’ comp MPN directory, available to all at no cost (read: FREE).

Each Claims Administrator Profile displays the number of insurer or self-insured employer MPNs where daisyBill found an association between the claims administrator and either an insurer or employer’s MPN. How we determined these associations is explained further below. 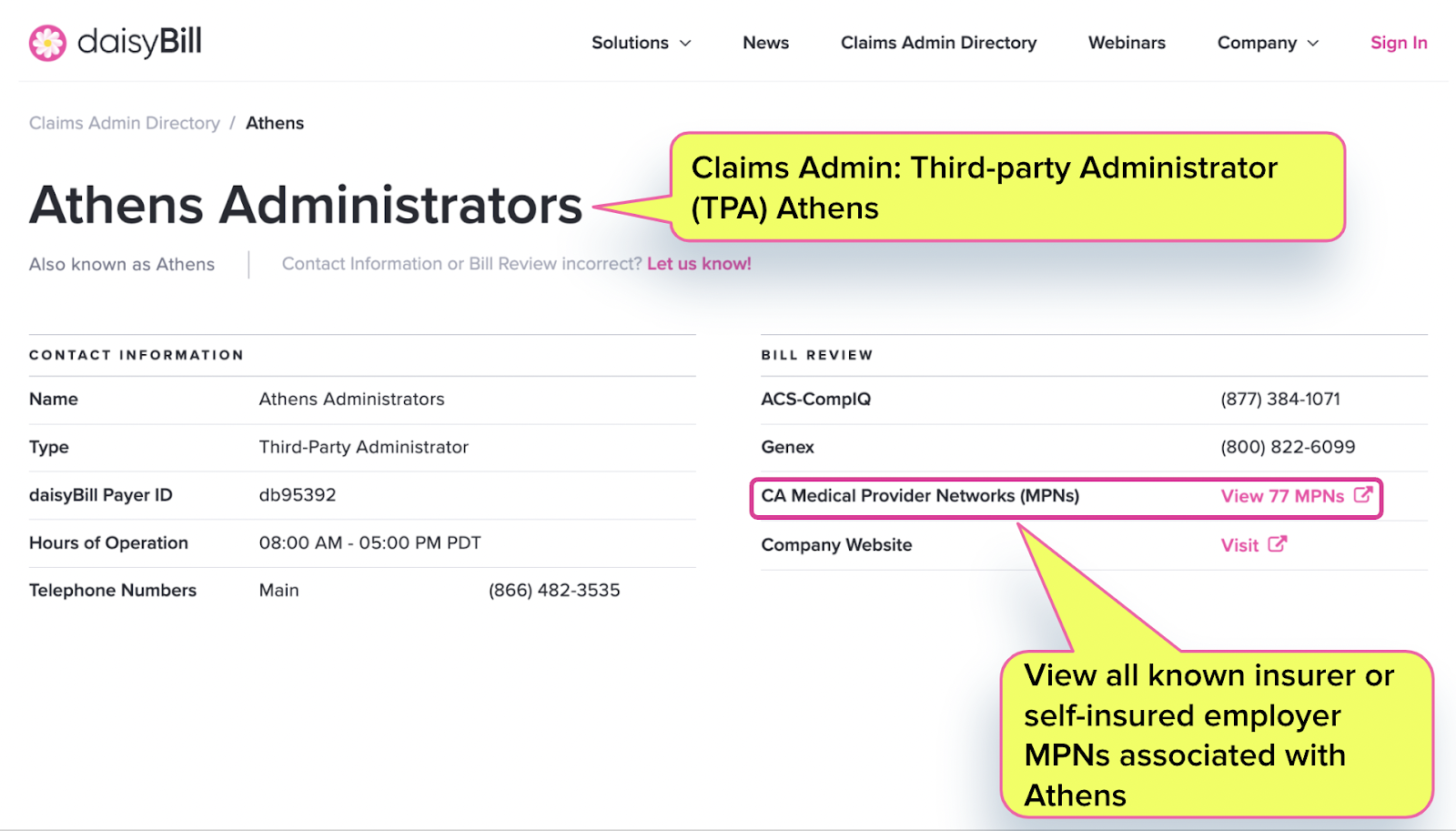 The MPN page includes a wealth of details about each MPN. As shown below, details include: 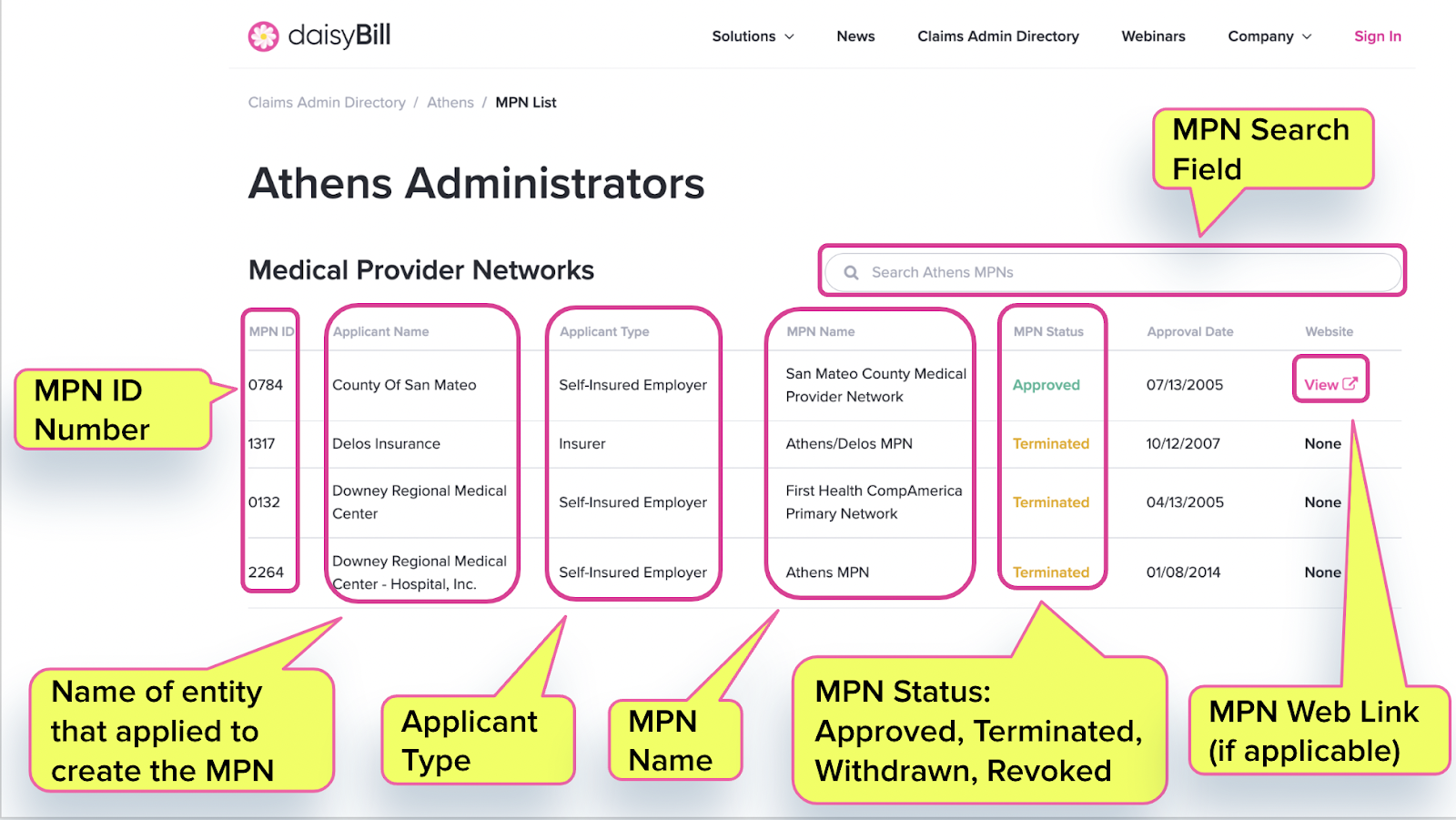 The MPN information is also searchable; you can look up MPNs by the MPN name, the applicant name, ID number, or status.

The MPN information in the Claims Administrator Directory is based on the Division of Workers’ Compensation (DWC) MPN list, which currently lists 2,470 MPNs.

For example, for third-party administrator Athens, the Directory (below) reveals that one of Athen’s self-insured employer clients, the County of San Mateo, maintains an approved MPN. 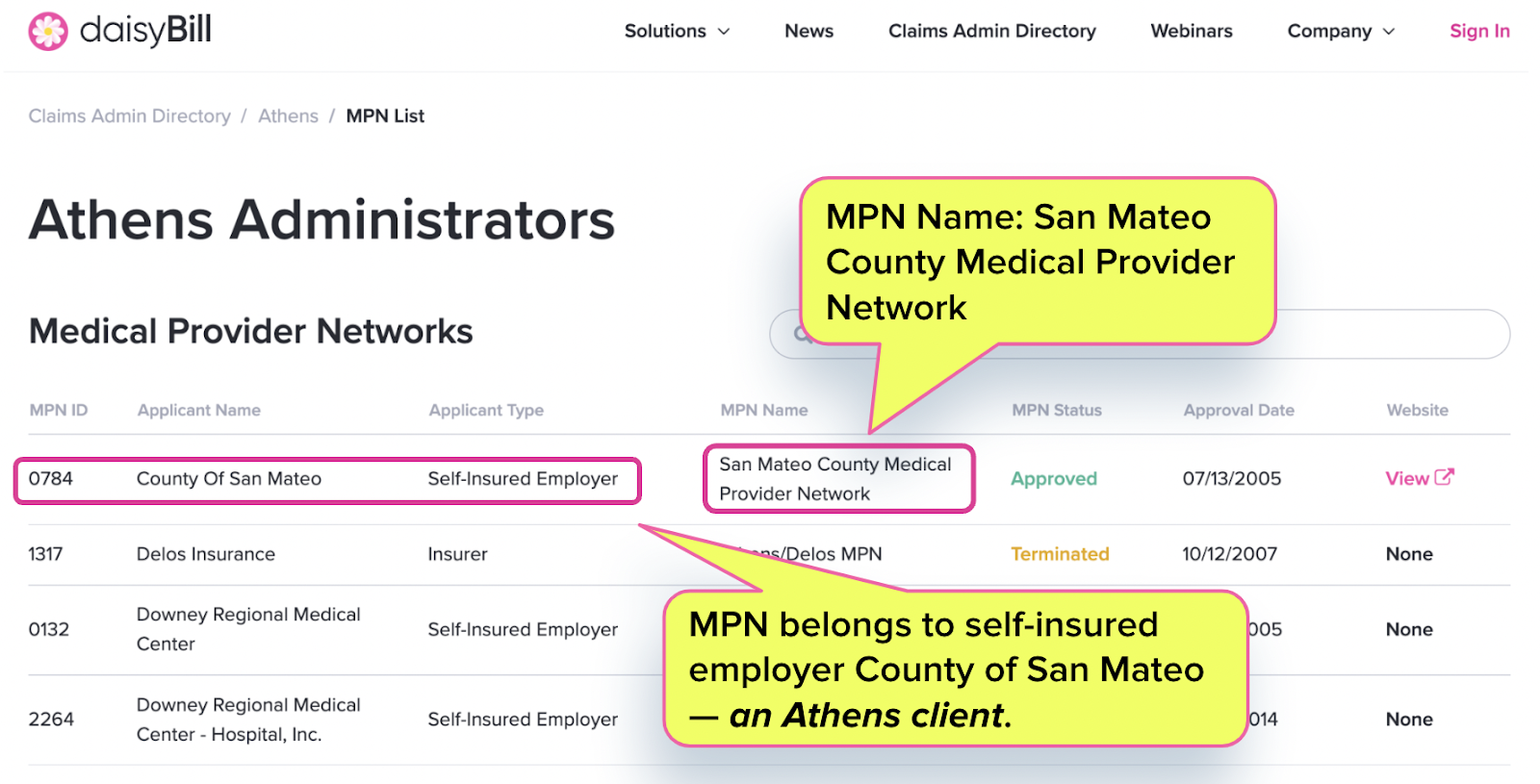 Needless to say, all this MPN research is a significant undertaking for daisyBill — especially considering the absurd number of MPNs. For example, our painstaking work on the DWC list revealed that there are no less than 465 insurer/employer MPNs associated with TPA Sedgwick. 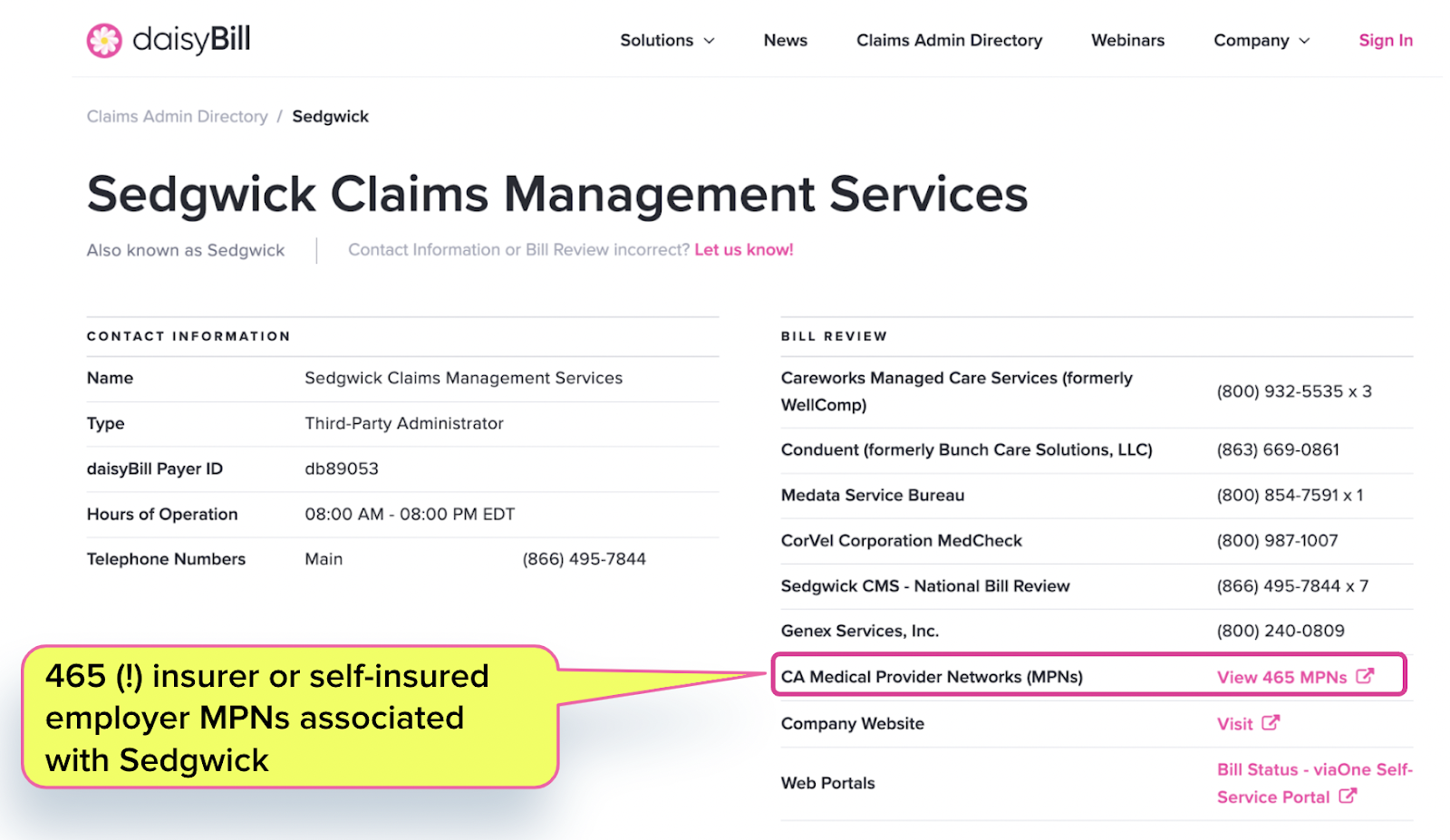 daisyBIll updates the Directory’s MPN information quarterly, as well as whenever the DWC updates its MPN list. That said, we encourage all providers to drop us a line if any of our MPN information appears incorrect, out of date, or incomplete — just click ‘Let us know!’ on the claims administrator’s profile page to send us a message. 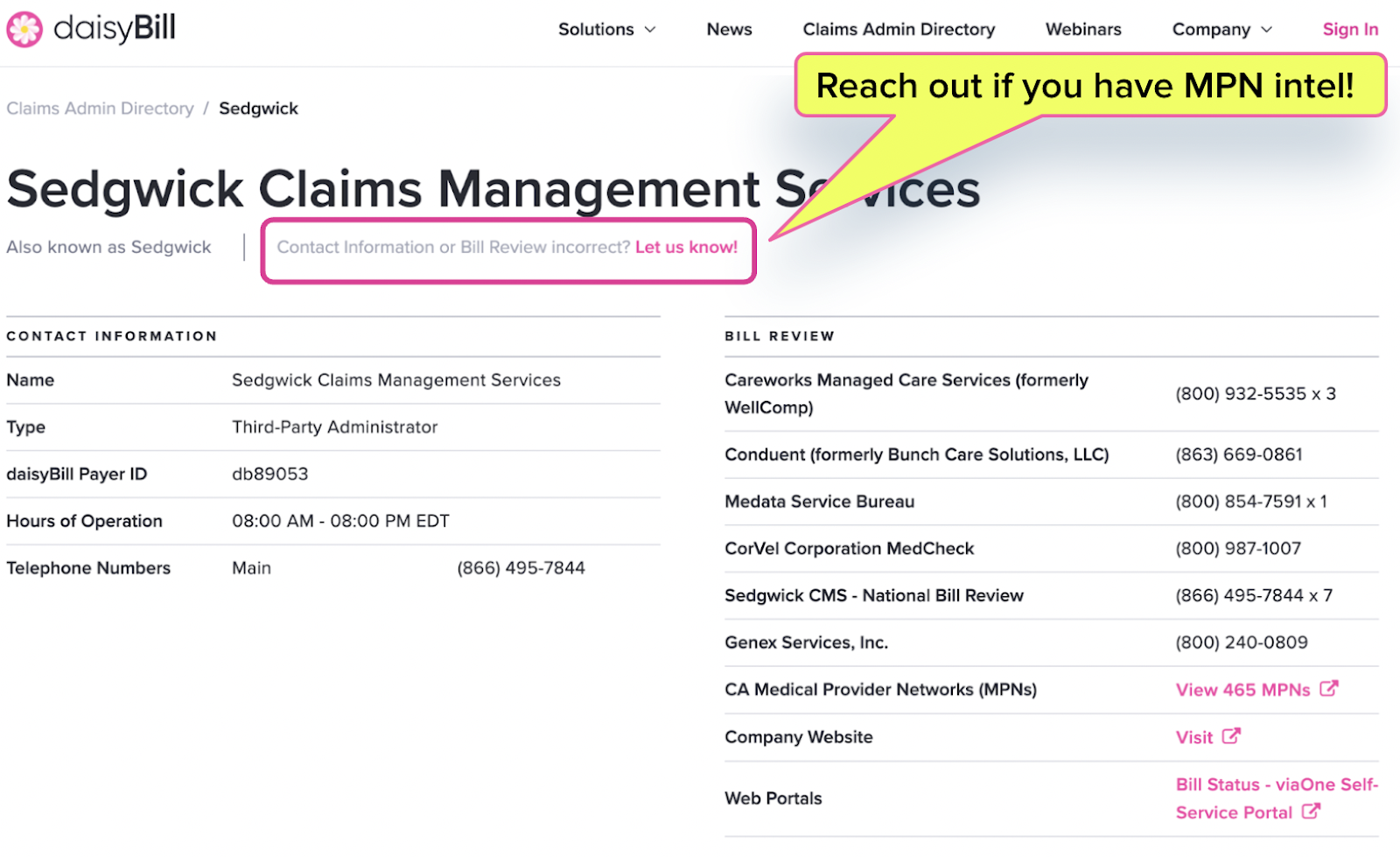 Unfortunately, certain entities in the workers’ comp system stand to profit by keeping information out of providers’ reach. Adding MPN details to daisyBill’s Claims Administrator Directory is our latest effort to empower workers’ comp providers by sharing what we know — together, we’re stronger.

Apr 26, 2022 5 min read
CA MPNs: 10 Facts About Monetized Provider Networks
It is crucial for doctors to understand both how California Medical Provider Networks (MPNs) operate to restrict doctors from treating injured workers and how some “entities”...

Mar 14, 2022 5 min read
PPOs Force Doctors to "Pay-to-Play"
Whether in business, politics, or sports, forcing professionals to pay for the privilege of simply doing their jobs (aka “pay-to-play”) is indefensible. But arguably, ...