In early March, we reported on the Workers’ Compensation Appeals Board (WCAB) adoption of its final Rules of Practice and Procedure to implement Senate Bill 1160. Chief among these rules were new regulations for liens. The rules officially slid into effect on March 26 of this year, but not without controversy. It appears that controversy is coming to an end: A petition from the California Workers’ Compensation Interpreters’ Association challenging the new rules was summarily denied by California’s First District Court of Appeal.

The DWC’s new Supplemental Lien Form requires lien claimants to certify that they meet one or more of the following seven requirements:

a. The claimant is the employee’s treating physician and is providing treatment through the employer’s medical provider network (MPN).

b. The claimant is the agreed or qualified medical evaluator overseeing the case.

c. The treatment provided by the claimant was previously authorized by either the employer of the claims administrator.

d. After a diligent search, the claimant has determined that the employer does not have an MPN.

e. The claimant has documentation that medical treatment for the injured employee has been neglected or unreasonably denied.

f. The claimant can show that any expense arising from their treatment was the result of an emergency medical condition.

g. The claimant is either providing medical-legal services as a copy service, providing services during a medical-legal examination as a certified interpreter, or has some other expense allowed as a lien per the rules of the DWC administrative director.

Note that the new lien form provides for interpreter services during a medical-legal examination, but not during medical treatment.

The interpreters, using the same law firm that challenged the lien fee provisions in SB 863 to no avail four years ago, argued that choosing among these options, as currently worded, could require an interpreter to perjure themselves, even if their lien was valid.

The First District Court of Appeal declined to elaborate on its decision to dismiss the suit, but all is not lost for the interpreters. According to an article on Work Comp Central, the decision prompted the Department of Industrial Relations (DIR) to file a brief explaining how interpreters can satisfy the requirements introduced in SB 1160.

The DIR clarified that this documentation was not limited to medical records, and could instead consist of a letter from an insurance company denying the claim or a declaration signed by the interpreter stating that the insurer did not supply an interpreter despite knowing that one was needed.

This brief marked the first time that the DIR addressed the interpreters’ concerns, which were initially raised prior to SB 1160 being signed into law.

Clarification in hand, the deadline looms large for existing lien claimants to retroactively file a declaration affirming that they satisfy the above requirements. All claimants who filed a lien between January 1, 2013, and January 1, 2017 – that is to say, liens subject to the filing fee under Labor Code § 4903.05 – must file their declarations prior to July 1, 2017.

This declaration can be filed using the DWC’s new Supplemental Lien Form, which is available to JET- and e-filers through the filing system. Existing liens without such a declaration will be dismissed after July 1.

New lien claimants are required to file both an original bill and a full statement or itemized voucher to justify their lien. In addition to affirming that the claimant meets at least one of the requirements outlined above, the declaration must also affirm that the lien is not a dispute subject to Independent Medical Review (IMR) or Independent Bill Review (IBR). 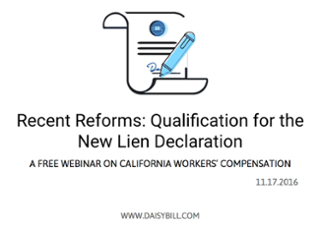 Providers — interpreters in particular — be advised: a California appeals court ruled that claims administrator Meadowbrook Insurance is not required to pay a disputed fee fo...

A new order from the Administrative Director of California’s Division of Workers’ Compensation (DWC) updates the Physician and Non-Physician Practitioner Services portion of ...