Liberty Mutual and a Cautionary Tale of Payment Woes

Today we’re sharing a maddening and all-too-common story of payment woes, this time featuring Liberty Mutual as the miscreant that just won’t pay a bill correctly -- despite being in the wrong, despite being ordered to do so, despite SIX voicemails and over two hours on hold by our intrepid DaisyBill Compliance Team, and despite the passage of several seasons.

It didn’t take long for claims administrators to deduce that, without dedicated technology like DaisyBill’s, it was practically impossible for providers to scale this prohibitive appeal mountain, especially for small amounts that were incorrectly reimbursed. Thus, claims administrators regularly deny providers Second Review appeals for correct payment, because there are truly zero reasons to correctly pay the provider. No penalties, no interest due, no audits, no consequences.

What follows is but one example among many that show how the lack of consequences for claims administrators unravels the workers’ comp payment process, a cautionary tale not only for the improperly paid provider but also for employers and government entities.

1. The tale commences on 2/27/2019 with Liberty Mutual incorrectly reimbursing two CPT codes and the provider committing a billing error by neglecting to add an appropriate modifier to one code.

Liberty Mutual Bill Review correctly denies the code missing the modifier, but there is no excuse for the two incorrect reimbursements which total $10.99. Liberty Mutual should be held responsible for correctly reimbursing providers per the California Official Medical Fee Schedule (OMFS).

*Note to employers, providers, and regulators: Without accountability, this reimbursement tale demonstrates the Kafka-esque trials inflicted on a provider trying to collect the correct reimbursement that the state deems is appropriate for treating California injured employees. 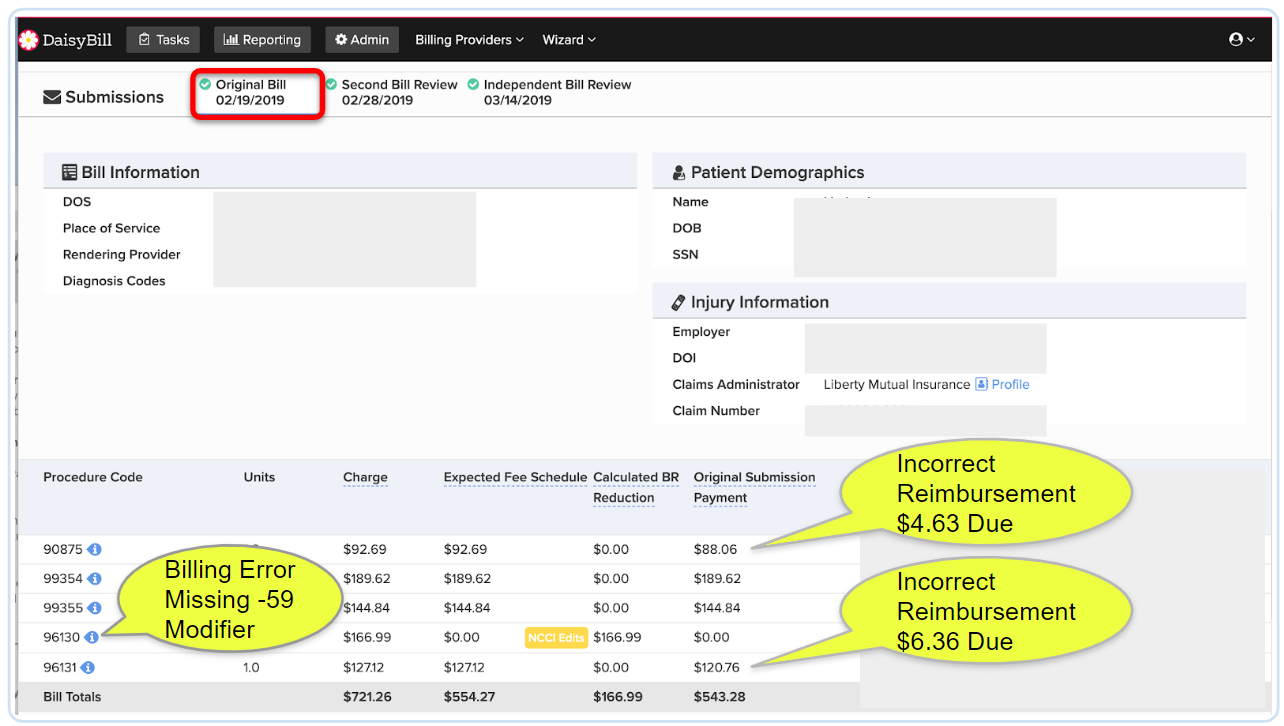 2. The next day, on 2/28/2019, the provider submits a timely Second Review appeal to Liberty Mutual requesting the correct reimbursement of $10.99 for the two CPT codes incorrectly reimbursed.

Further, in the Second Review appeal, the provider explains the billing error and amends the 96130 billing code by adding the correct modifier. With the correction, an additional $166.99 is due for this CPT code. 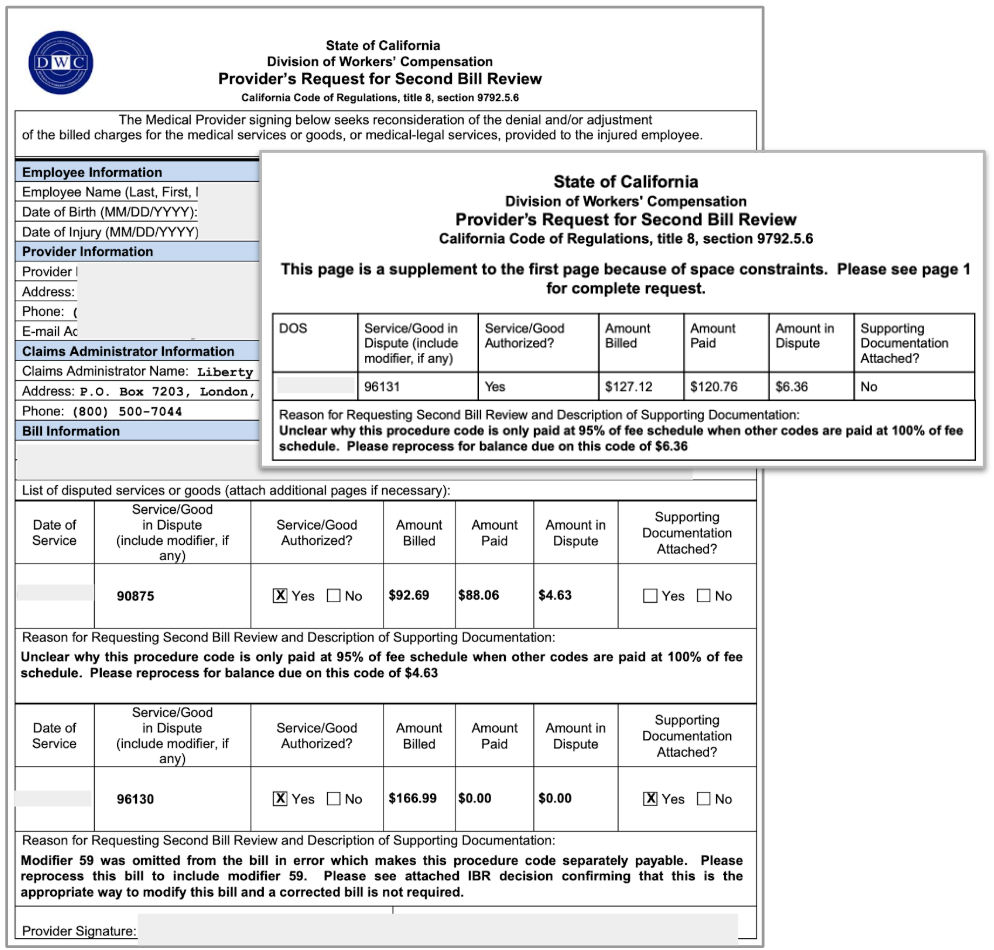 *Note to employers, regulators, and providers: the California Official Medical Fee Schedule clearly denotes the reimbursement due to the provider. By failing to correctly reimburse this provider, Liberty Mutual undermines California workers’ comp by placing the burden on the provider to pay $195 to file an Independent Bill Review to obtain the correct $177.98 reimbursement. 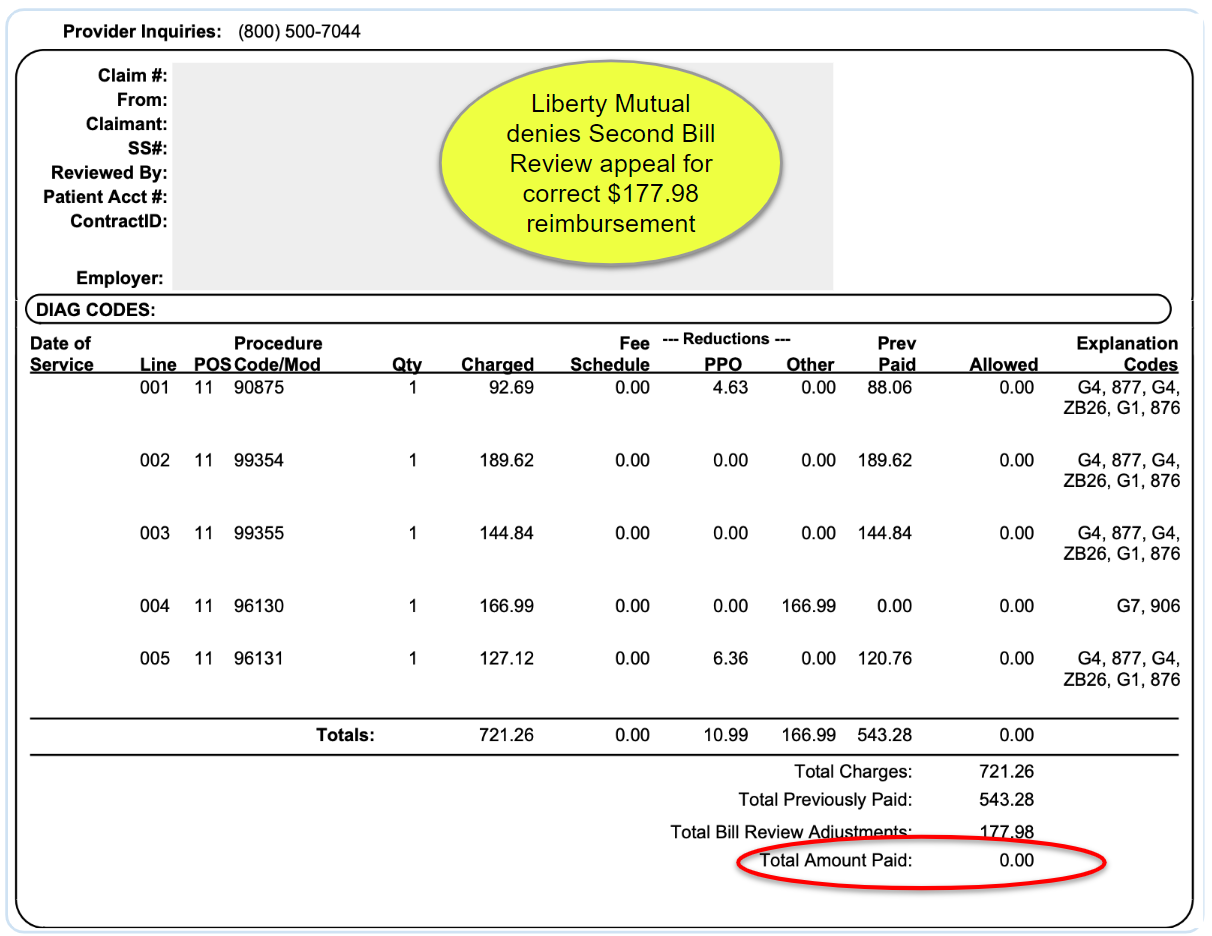 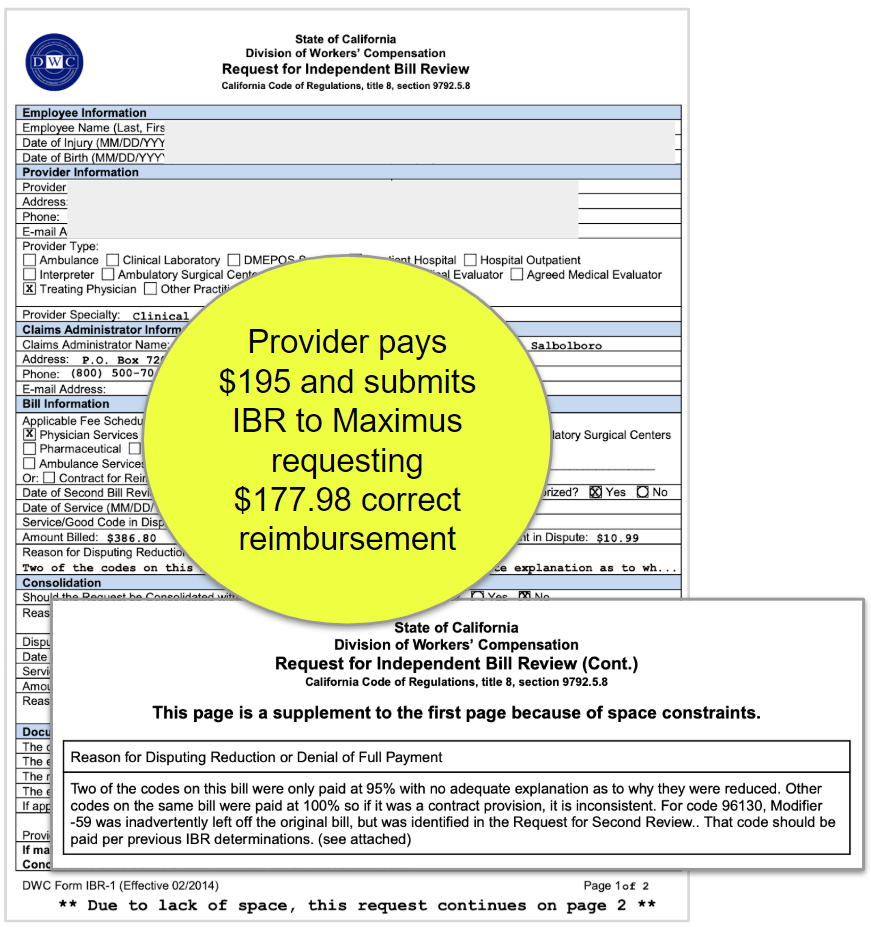 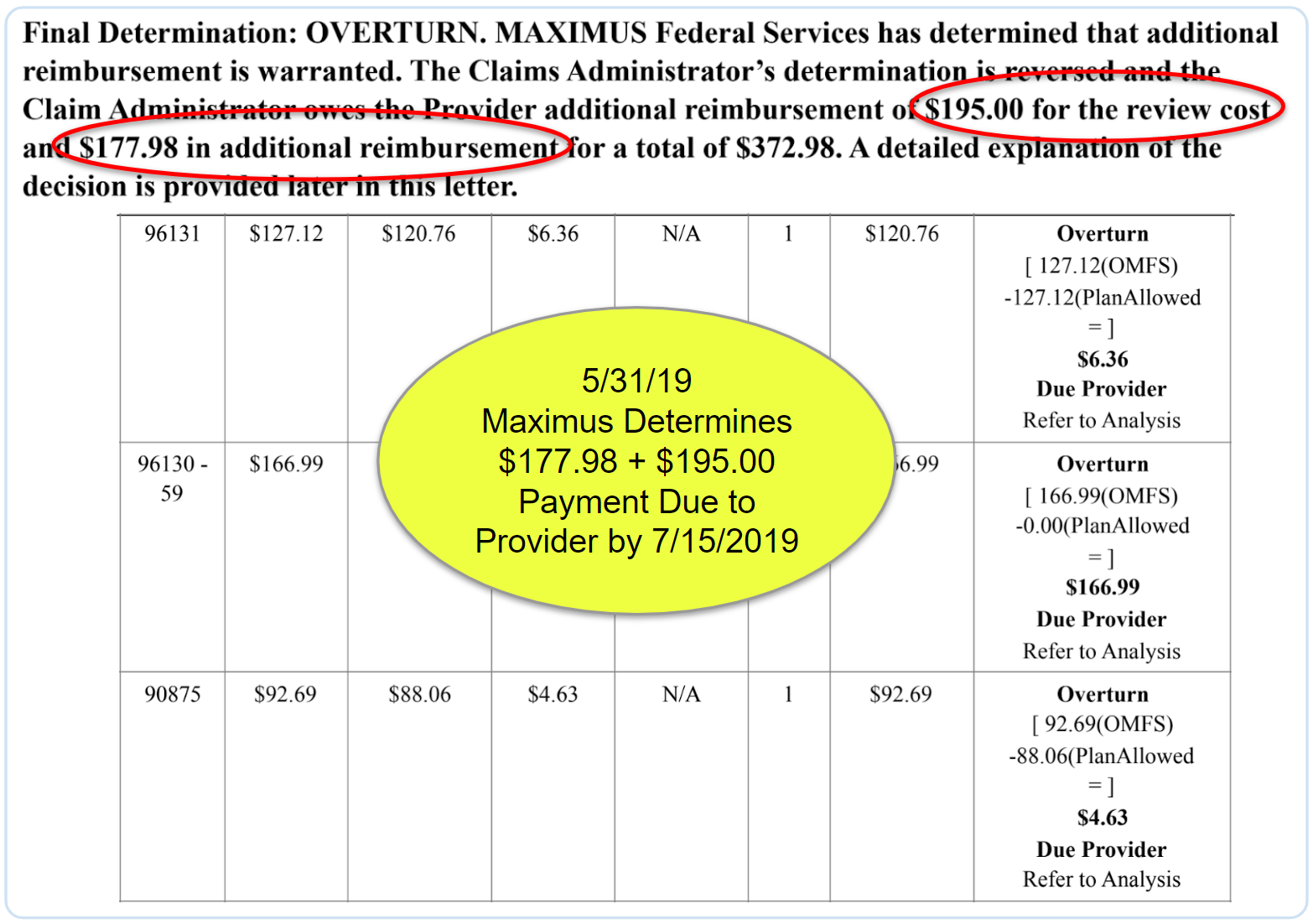 7. 8. 9. 10. 11. 12. 13. To obtain the additional $177.98 reimbursement awarded by Maximus, our team left a total of SIX voicemails with Liberty Mutual. After the fourth voicemail, the DaisyBill Compliance Team received a response from Liberty Mutual with instructions to contact Liberty Mutual Bill Review. As instructed (and as we wrote about previously), we contacted Bill Review and we were placed on hold for two hours, ten minutes. 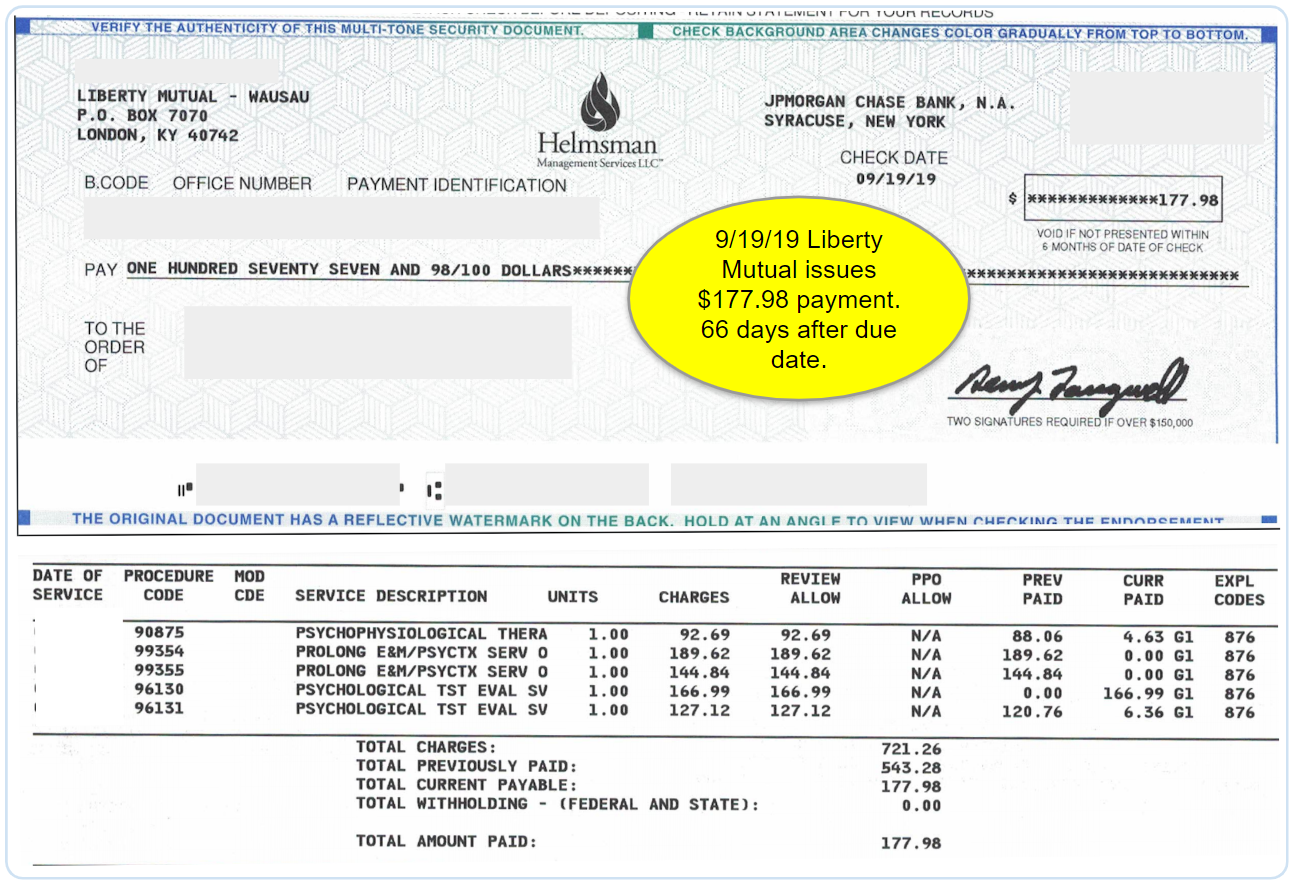 Is this the way that providers should be treated? Is this how we want doctors rewarded for tending to injured employees? And is this any way for a claims administrator to act on behalf of its employer clients?

Stay on top of the latest news in the world of workers’ comp billing and payment — including claims administrator (mis)behavior, rule changes, and other news that can affect your practice. Click below to subscribe to our blog:

STAY ON TOP OF WORKERS’ COMP

Providers — interpreters in particular — be advised: a California appeals court ruled that claims administrator Meadowbrook Insurance is not required to pay a disputed fee fo...