Almost immediately after DaisyBill called out Prime Health Services (PHS) for questionable PPO practices, it was clear we struck a nerve. PHS attorneys sent DaisyBill a ‘please stop’ letter requesting among other actions that we retract our description of the curious timeline surrounding an unsigned PHS PPO contract.

In November 2020, DaisyBill contacted PHS on behalf of a provider to discuss the terms of a PHS Preferred Provider Agreement contract. The PHS representative admitted that their EVP had failed to sign the contract in question. Despite this admission, PHS subsequently produced a signed copy of the contract, dated September 2020.

In October 2020, a DaisyCollect provider started receiving reimbursements that were reduced to 30% below the amount allowed by the California Official Medical Fee Schedule (OMFS). The explanations of review (EORs) all listed Prime Health Services as the reason for the 30% reimbursement discount.

On November 19, 2020 DaisyBill contacted PHS to determine whether the PHS contract complied with California law (LAB §4609). In response to the inquiry, Leslie Losey, a PHS-designated National Network Development Executive, emailed:

“In terms of the signed, fully-executed contract- It looks like my EVP has not signed it yet. I have a printed copy lying on my desk now, and I will have him sign it as soon as he gets in today!”

Losey, a PHS executive, clearly stated that the contract was unsigned on November 19, 2020 (and on her desk). PHS attorneys now insist that Losey was mistaken. Citing administrative difficulties brought on by COVID, the PHS attorney letter claims “an unsigned version [of the contract] was uploaded by mistake.”

The letter from the PHS attorney also claims that despite the “new challenges with operating remotely,” the oversight was “immediately corrected” in November:

The agreement at issue was one of thirty agreements that were all uploaded on the same day in September 2020. For one of those thirty agreements, a blank agreement was accidentally uploaded for the particular provider referenced in the Defamatory Blog Posts. Once the oversight was recognized in November [emphasis added], it was immediately corrected.

Just because an unsigned version was uploaded by mistake, it does not follow that PHS did not have the signed agreement in its possession.

The agreement at issue had been signed by the provider and was effective, and no backdating occurred.

Despite the unsigned contract on Losey’s desk, attorneys insist that the PHS-signed copy had always been...somewhere, just not uploaded. And as it happens, “immediately corrected” may be yet another questionable claim from PHS. 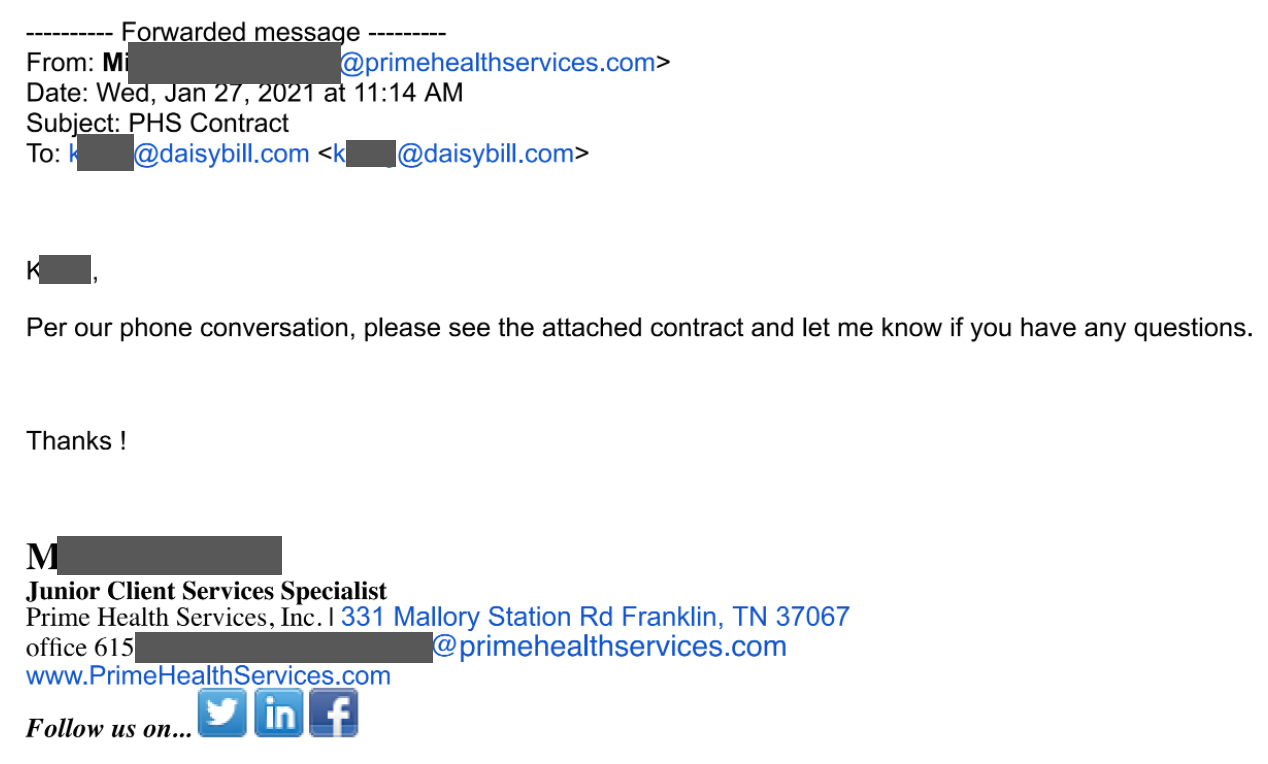 When we made this dispute public on our blog, PHS attorneys sent the ‘please stop’ letter requesting the posts be removed, or else.

Instead, for the sake of clarity, we are using this space to delineate the facts of this dispute. Below is a timeline of events and actions regarding this PHS PPO contract, which reduces the provider’s reimbursement for treating injured workers by 30% for dozens of payers.

California legislators should ask this question: Why does California workers’ comp allow PHS and its bill review clients to profit by siphoning revenue intended for providers who help injured workers return to work?

We see it as a vital part of our mission to ensure that workers’ compensation providers understand how slippery the world of network discounts can be. Whether it’s the blurred distinction between MPNs and PPOs, the opacity of discount leasing, or muddled execution timelines, discount dangers lurk.

For PHS to react so aggressively only drives the point home. We are guided accordingly.

DaisyBill helps providers obtain correct reimbursement for treating injured workers — quickly. Contact us to learn how we can help your practice