Prime Health Services (PHS) provided an unbelievable example of just how far PHS will go to secure unearned PPO discounts for their “clients”, including producing a missing signature seemingly from thin air.

DaisyBill contacted PHS on behalf of a provider in order to discuss the terms of the provider’s PHS contract. Incredibly, PHS admitted to never signing their own Preferred Provider Agreement contract.

Despite this admission, PHS subsequently — and without explanation — produced a signed copy of the contract in question, dated months prior to our first inquiry. By this point, dozens of payers had already cited the PHS contract to justify large reductions of the provider’s reimbursements.

As we reported previously, PHS in September 2020 sent the provider two documents:

In our view, sending the MPN and PPO documents together brings to mind a classic “bait and switch,” which in this case caused the provider to (understandably) conflate the MPN and PPO. We cannot claim to know PHS’s intentions in this regard, but the result was that our provider, dazzled by the (alleged) MPN benefits, signed the PPO agreement.

Soon enough, PHS shared the PPO discount with a slew of PHS clients, lopping 30% off the provider’s reimbursement from dozens of payers. All these payers have to do is write “PHS” on the Explanation of Review (EOR) to get a 30% discount — in exchange for nothing at all.

Once DaisBill stepped in to address the issue directly with PHS, things got interesting.

The Case of the Missing Signature

When DaisyBill representatives reached out to PHS, we discovered a shocking fact: PHS never executed the PPO contract in question, as the email below shows.

Nevertheless, the PHS representative claimed that “The contract is in full effect and has been since 09/04/2020. ” But as shown below, the PHS contract itself states clearly that it is only effective once PHS executes the contract.

Again in February 2021, a PHS representative re-confirmed that the contract was still not executed. At this point, the provider recognized the possible “bait and switch,” and contacted PHS to withdraw their agreement to the contract.

A DaisyBill representative emailed PHS to assert in no uncertain terms that the PHS contract was invalid, as well as out of compliance with California Labor Code Section 4609. 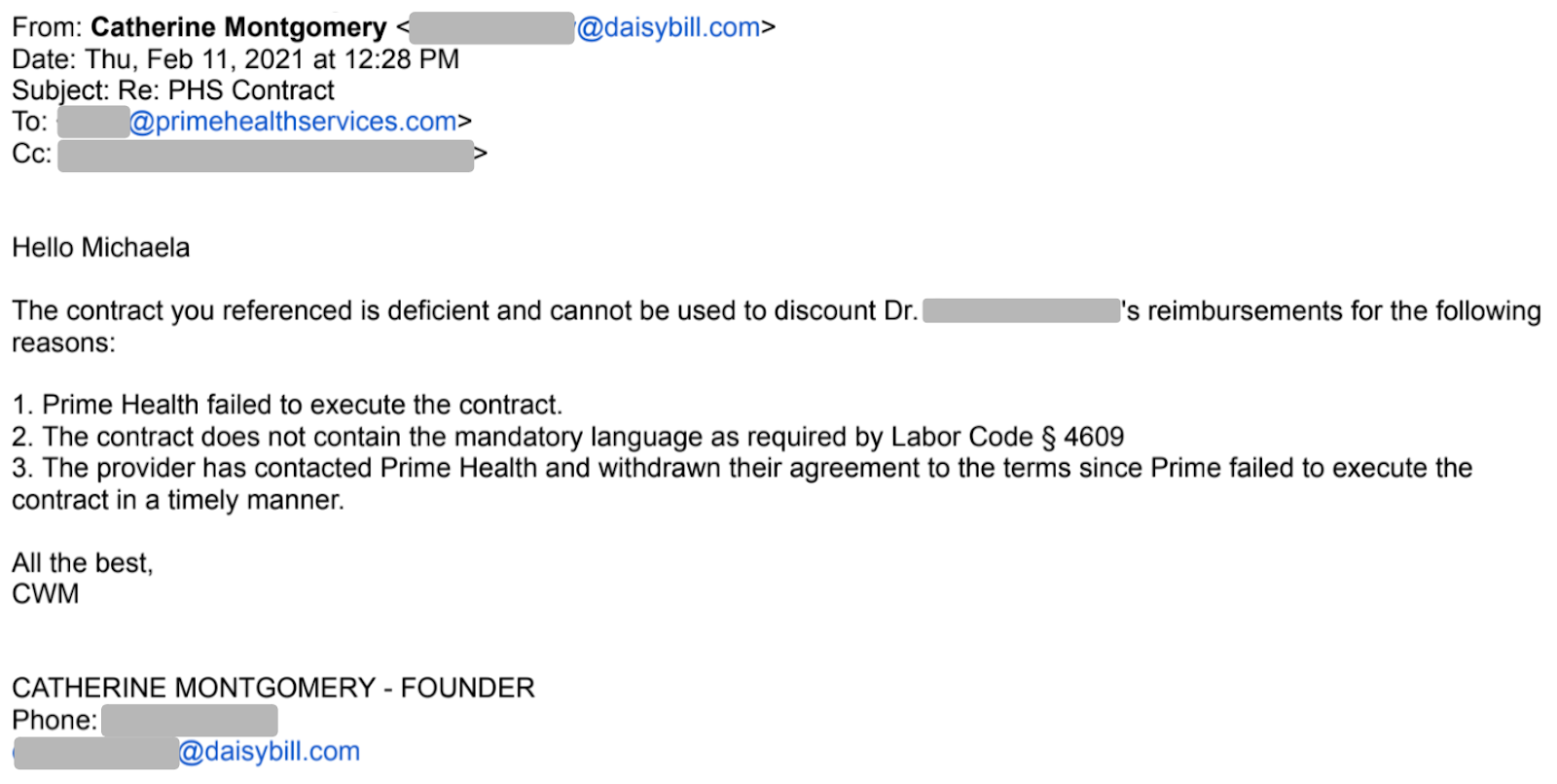 Then, things got really interesting. Keep reading to discover the elusive execution.

On March 30, 2021, PHS emailed the signed contract to the provider, dated September 2020 — the same contract PHS representatives acknowledged was unsigned as of February 2021. Yet somehow or another, it appeared in our provider’s inbox, signed and dated:

We can only assume that Mr. Hurt was unaware of PHS’s open admission to never having executed the contract. If PHS intentionally backdated this contract, with all the ingenuity of an 8th grader forging their parent’s signature on a bad report card, it’s unethical to say the very least.

Just as irresponsible are the slew of payers that enjoyed a 30% discount under the invalid contract. For months, PHS clients took 30% of this provider’s due reimbursement based on this unexecuted agreement.

Each of the payers below took their slice of the provider’s revenue without bothering to confirm the existence of a signed agreement allowing them to do so:

Restoring Revenue to the Provider

With the mystery of the missing signature solved, the provider must now shoulder the burden of appealing for restitution. Appropriately, the provider filed hundreds of Second Review appeals disputing the illegitimate discounts individually, with the following language:

This Provider disputes the amount [claims administrator] reimbursed [provider] for the service(s) rendered because no signed contract or agreement exists between the discount contracting entity reported by the EOR, Prime Health - External, and [provider] that allows [claims administrator] to pay a preferred reduced contracted rate to the Provider.

Furthermore, the provider rescinded his agreement to the unsigned contract.

If the claims administrators attempt to stand by the invalid discounts, even after Second Review, the provider must take the next step: requesting Independent Bill Review (IBR) from the state. Unfortunately, each IBR request requires a $180 filing fee from the provider, refundable only when the state rules in the provider’s favor.

In this case, DaisyBill has gladly offered to pay the IBR filing fees on behalf of the provider, on principle. Look to this space for future updates on this story as it unfolds.

DaisyBill has your back. We know the rules, and empower providers to insist on fast, accurate payment from claims administrators. Get in touch to learn how: