Yet despite this valid, signed contract, Sedgwick chose not to honor the agreement and refused to reimburse the physician at the contracted rates.

Even more disturbing, the California Division of Workers’ Comp (DWC) ruled the dispute ineligible for Independent Bill Review (IBR) — despite previously ruling in favor of the exact same provider, regarding the exact same contract with the exact same employer (the LACoFD) and claims administrator, Sedgwick.

Once again, inconsistency between the Division of Workers’ Compensation (DWC) and its IBR proxy, Maximus, leaves providers with no idea what the IBR rules really are — and rewards Sedgwick’s disregard of a legally binding agreement.

An agreement between the LACoFD and the Firefighters’ Union resulted in a unique “Carve Out” arrangement for physician IME services.

In the first dispute, per the terms of the LACoFD contract, the provider submitted a bill for IME services requested by the LACoFD. Rather than reimbursing the provider at the higher contracted rate, Sedgwick improperly reduced payment to the MLFS rate for the services billed.

On the Explanation of Review (EOR) for the incorrect reduction, Sedgwick offered a single rationale :

The provider submitted a Second Review appeal to dispute Sedgwick’s incorrect reimbursement. In the appeal, the physician included the signed Carve Out IME contract. But again, Sedgwick refused to reimburse the provider at the LACoFD contracted rate.

Sedgwick’s refusal forced the provider to pay $180 to request IBR. Correctly, Maximus ruled in the provider’s favor and ordered Sedgwick to reimburse the physician at the contracted IME rate, and restore the $180 IBR filing fee.

However, the DWC would later defy this clear precedent.

In March of 2021, Sedgwick again improperly reimbursed the same provider’s bill for a new LACoFD patient, with the same rationale listed on the EOR as before: “The charge exceeds the Official Medical Fee Schedule [OMFS] allowance.” 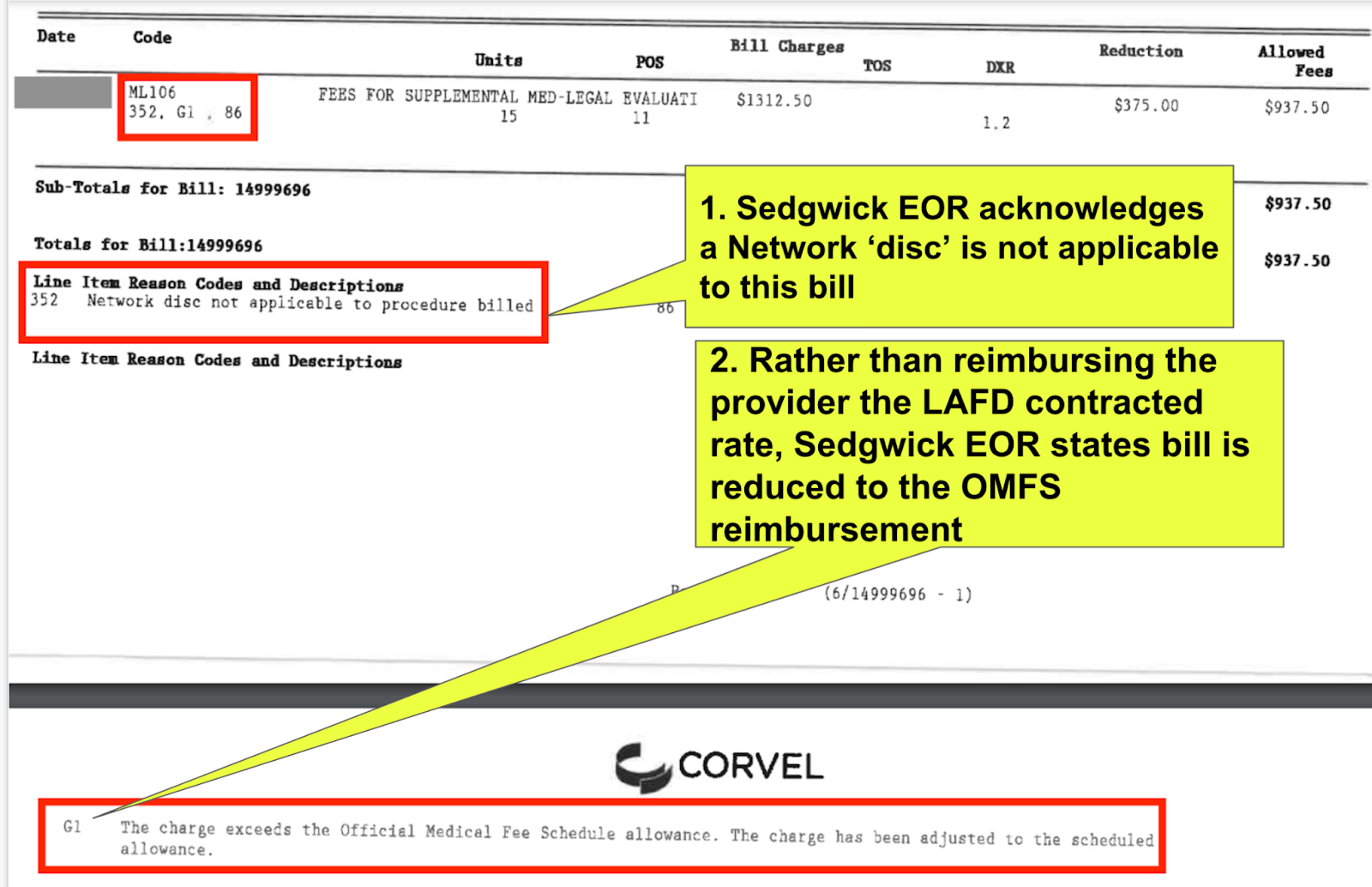 Note: In this case, Sedgwick used CorVel as the bill review vendor.

The provider again submitted a Second Review appeal, which Sedgwick denied as a duplicate of the original bill, because why not? Since there are no consequences when claims administrators fail to properly reimburse physicians that treat injured workers, random denial reasoning is to be expected.

Reasonably expecting to prevail a second time, the provider again paid $180 to file an IBR request. With the request, the provider even attached Maximus’ previous official letter of Final Determination overturning Sedgwick’s earlier improper adjustments. The provider had every reason to think justice would be served.

Unfortunately, the DWC stepped in.

For reasons unknown, Maximus referred the case back to the DWC, rather than making a determination of its own. The DWC subsequently deemed the dispute ineligible for IBR, claiming:

“Here, the payment dispute involves the applicability of a PPO contract to the provider with respect to the billing code in dispute. This is not an issue that can be resolved through the independent bill review process.”

There are 3 glaring problems with the above DWC reasoning:

1. There is no “PPO” dispute. The LACoFD contract in question is a valid Carve Out contract, permissible under California Labor Code Section 5301.11, with specified rates between the physician and employer. Neither the provider nor Sedgwick ever asserted there was a PPO dispute, because there wasn’t.

2. The DWC failed to follow its own instructions. The DWC website instructs providers to utilize IBR when the payment dispute involves a 5307.11 contract for reimbursement.

If the medical service is covered by a fee schedule adopted by the Division of Workers’ Compensation (DWC), for example treatment under the Physician Fee Schedule or an evaluation under the Medical-Legal Fee Schedule, or set forth in a contract for reimbursement (Labor Code section 5307.11), then SBR and IBR must be utilized to resolve the dispute within a matter of weeks, as opposed to possible years under the WCAB lien system. [emphasis added]

3. Maximus already covered this. On the DWC’s behalf, Maximus previously ruled in the same provider’s favor, under the same contract, with the same claims administrator.

In this case, there is no “threshold” issue at play, like compensability, that would disqualify the case from IBR. There is simply an amount owed, an amount paid, and a difference between the two — precisely what IBR is for.

Not for the first time, the DWC and Maximus can’t seem to sing from the same song sheet, leaving providers in the wind.

*A previous version of this post incorrectly referred to the LA County Fire Department as “LAFD,” which is the acronym used for the City of LA Fire Department.

Make it harder for claims admins to improperly deny payment. Make it easier for your office to get paid, in full and on time. DaisyBill has the tools — reach out to learn more.