Sedgwick has a Second Review problem.

On too many occasions, Sedgwick incorrectly denies providers’ Second Review appeals as “duplicate submissions” of the original bill. As a result, providers must request Independent Bill Review (IBR), at a further cost of time, resources, and the $180 IBR filing fee (refundable only if the provider prevails at IBR).

It is impossible for us not to ask: is Sedgwick being inept, cynical, or some combination of the two when denying a compliant appeal as a duplicate bill?

There is no good answer.

DaisyBill clients submit Second Review appeals electronically using the DWC SBR-1 form. In other words, Sedgwick receives these appeals on a distinct, standardized document universally recognized as a Second Review appeal, as displayed in the example below: 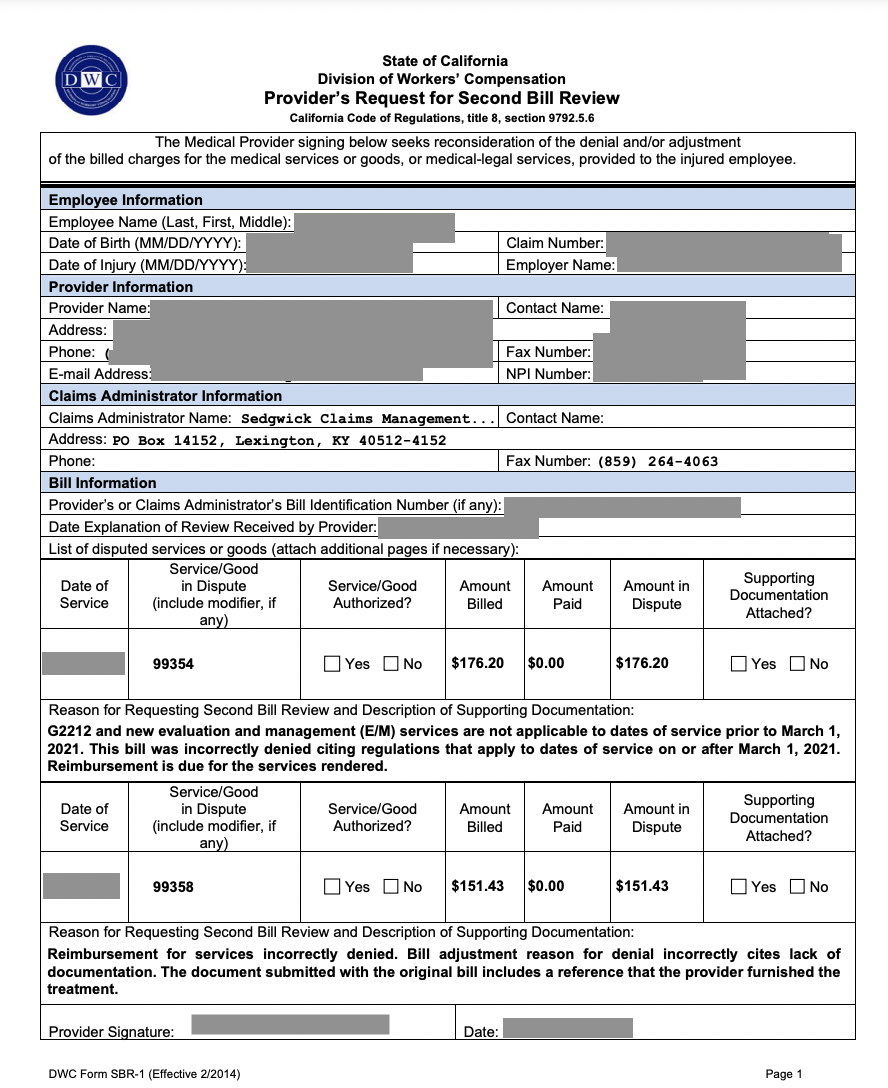 In addition, per the guidelines found in both the DWC’s Medical Billing and Payment Guide and California Code of Regulations (CCR) Section 9792.5.5., DaisyBill also electronically submits a properly modified CMS-1500 original billing form. To indicate an appeal, Box 10d of the CMS-1500 is populated with “BGW3.”

For good measure, we also populate box 19 for “Additional Claim Information” with “RECONSIDERATION!” as displayed below: 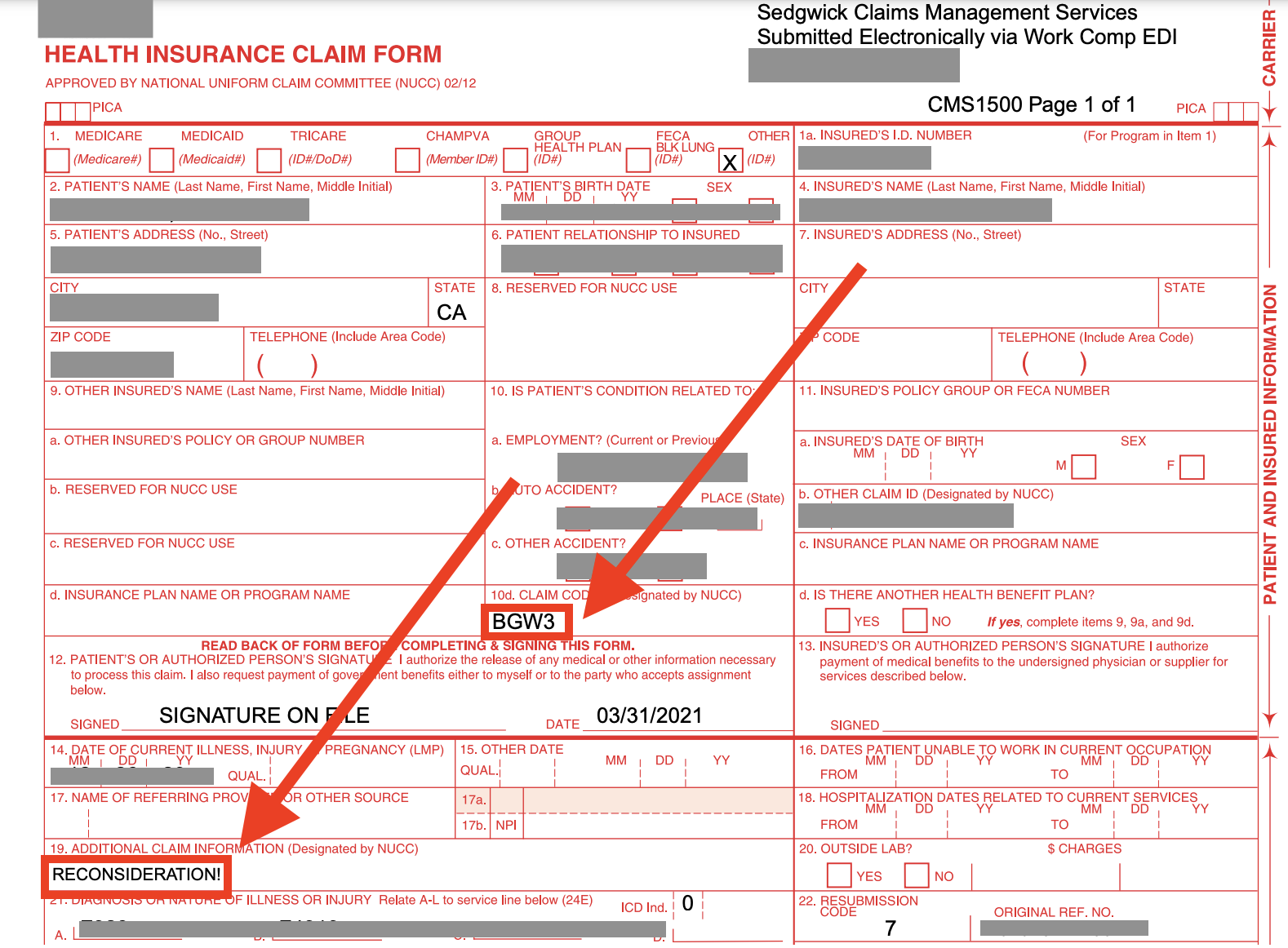 Yes, we use all caps and an exclamation point to clearly distinguish the appeal from the original bill.

DaisyBill Second Review appeals are 100% compliant and foolproof — but apparently not Sedgwick-poof.

Somehow, against all odds (and standards of basic competence), Sedgwick manages to mistake a standardized appeal form and an unmistakably labeled CMS-1500 for an original bill, time and time again.

In the Final Explanation of Review (EOR) below, Sedgwick denies the above documents as a duplicate of the original bill, rather than an appeal for reconsideration: 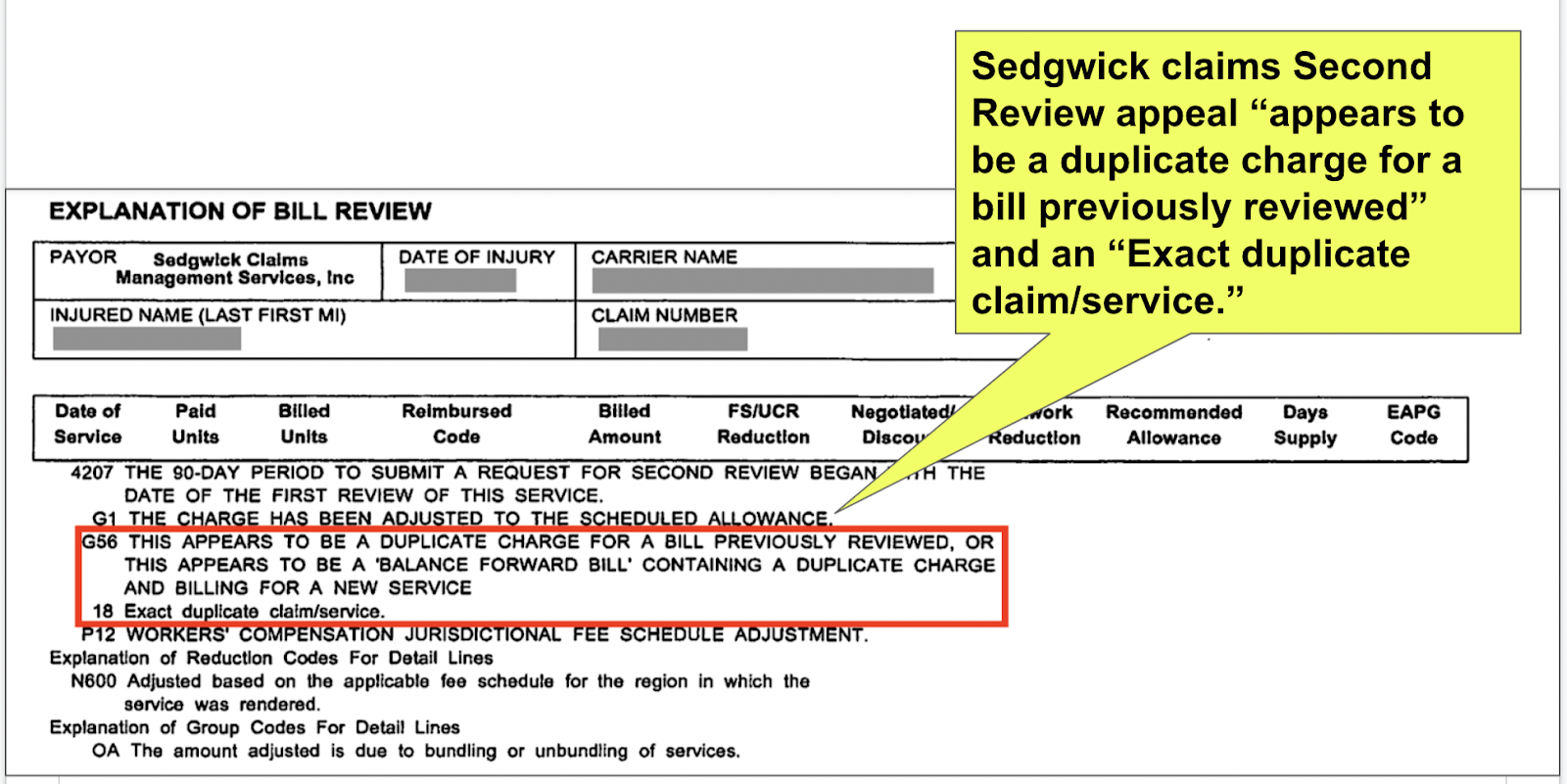 Again, this is not an isolated incident. The table below lists IBR cases in which Sedgwick misadjudicated Second Review appeals in exactly the way shown above:

Sedgwick suffers no consequences for torturing providers with these “duplicate” denials. These Sedgwick denials force the provider to expend enormous efforts to receive correct payment, and we suspect Sedgwick knows this.

With that, we can only appeal to Sedgwick: please learn the difference between an original bill and a Second Review appeal, or stop processing appeals as if you don’t know the difference. Every one of these absurd denials means more wasted provider time and resources, and more friction in an already inefficient system.

We make Second Review appeals easy. With just a few clicks, you can make sure that when claims administrators miss the mark, they correct their mistake. Contact us to learn more.

We asked our readers to submit their most vital California workers’ comp questions for a live Q&amp;A webinar. They did not disappoint!If you missed it, below is a brief r...