On October 1st, both the U.S. health system and the California Division of Workers’ Compensation officially adopted ICD-10 diagnosis codes.

Specifically, the California Division of Workers’ Compensation Medical Billing and Payment Guide, Section 3.0 (a)(2) states that:

Although ICD-10 coding is required on or after October 1, 2015, for a twelve month period ending October 1, 2016, no medical treatment shall be denied based solely on an error in the level of specificity of the ICD-10 diagnosis code(s) used.

But what exactly does “specificity” mean?

Take a look at our breakdown of the structure of an ICD-10-CM code. 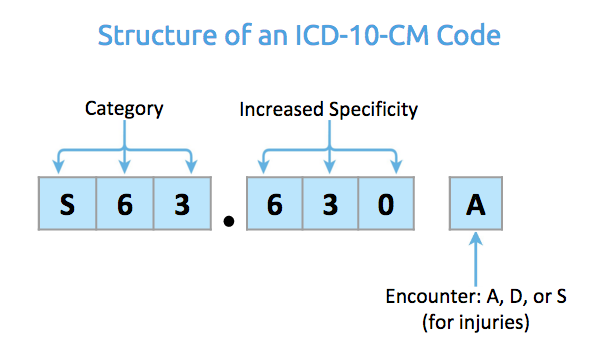 An ICD-10-CM code is anywhere from 3 to 7 characters. The more characters present, the higher the level of specificity.

The first three characters of an ICD-10-CM code indicate the diagnosis category and the affected body part. In the example above, for characters 1-3:

The second set of three characters offer further specificity about about the diagnosis: etiology, severity, laterality, and other important details that make the diagnosis even more specific. In example above, for characters 4-6:

Finally, the last character indicates whether the treatment was for an initial encounter, a subsequent encounter, or sequela (a complication that arises as a direct result of a condition). In the diagnosis example above:

Although the ICD-10 diagnosis codes guide may indicate a higher level of specificity is required, denial of a medical treatment bill based on a lack of ICD-10 code specificity is not allowed.

For California workers’ comp billing, an incorrect 4th, 5th, and 6th character--the part of the ICD-10 code that indicates increased specificity--cannot lead to a denial of a bill for treatment until October 1st, 2016.

Recent ICD-10 Updates Do Not Apply to Workers' Comp Billing

The latest in dubious denial strategies for California workers’ comp: some claims administrators are denying provider bills for being out of step with updates to the current ...

The No-Panic Guide to ICD-10

The ICD-10 effective date is only 9 days away! Here’s what you need to know: