Hands down, answering your questions is the most popular part of our work comp webinars. This post answers some of the most-asked questions from last week’s Request for Authorization (RFA) webinar.

Question: For follow-up visits, does the Primary Treating Physician (PTP) need to submit an RFA?

Answer: RFA approval is not required for PTP follow-up visits. As long as the PTP is not providing medical treatment, the PTP does not need to submit an RFA. Per a Maximus IBR decision, “Primary Treating Physicians (of record) do not require authorizations to see their patients for follow up visits on accepted body parts.” 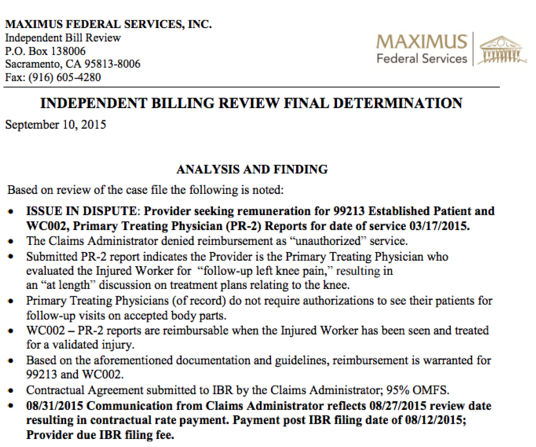 Question: I received RFA authorization, but payment was denied due to not being in the Medical Provider Network (MPN) or the “Approved Network.” Is this allowed?

Answer: Authorization guarantees payment. Payment denial after RFA approval is absolutely not allowed, even if the provider not being part of the MPN or network. Per the DWC utilization review FAQ found on the DWC website:  “Authorization means assurance that appropriate reimbursement for the treatment specified will be paid.”

Providers, if your RFA is approved then you must be paid for the authorized services.  The DWC FAQ clearly states “that authorization shall not be rescinded or modified for any reason after the medical treatment has been provided based on the authorization, even if the employer later determines the physician was not eligible to treat (e.g. was not an MPN provider).”

Question: If a provider indicates a request is expedited, however the treatment is something simple like PT or shoulder sling, are you still required to process as an expedited request knowing that it is not life threatening?

Answer: If the RFA is not substantiated as expedited, a claims administrator must still process the RFA, but under the normal--not expedited--time frames.

CCR Title 8, Chapter 4.5. Subchapter 1. Article 5.5.1. § 9792.6 (j) sets out only four conditions under which a treating physician can request an expedited utilization review decision:

For more answers to RFA questions, as well as step-by-step instructions on how to fill out and process an RFA, watch or download DaisyBill’s free RFA webinar.

When the employer and injured worker are locked in an injury liability dispute, the provider is frequently caught in the crossfire. Often, treatment cannot wait for the long ...