In helping providers to obtain correct reimbursement, we answer a daily onslaught of questions about billing and payment — and in particular, about authorization in California. There are a few widespread authorization myths we frequently encounter, the most pernicious of which we’d like to debunk here:

Myth #1: Some treatments do not require a Request For Authorization.

Santa Claus, the Easter Bunny, and treatment for an injured worker that doesn’t require authorization all compete in a marathon. Who wins?

There is not a single situation in which a provider can treat an injured worker without submitting a compliant Request for Authorization (RFA), using Division of Workers’ Compensation (DWC) Form RFA. There are only two billable actions that do not require an authorization, neither of which are “treatments” per se:

Regarding PTP office visits, only the charge for the visit itself is exempt from authorization. Any actual treatment delivered during the visit requires authorization, even for the PTP.

Furthermore, the  “automatic” authorization process instituted in 2018 provides no exceptions. While the term “automatic” implies there’s nothing for the provider to do, it only refers to the automatic approval of the request for authorization — the actual request for the approval is still required, and the provider must submit it retrospectively within 5 days of treatment.

It may seem silly to request authorization for “automatically” authorized treatment that the claims administrator cannot deny or modify. But as we explained in this post, claims administrators may conduct retrospective Utilization Review (UR) for automatically authorized treatments, in order to deter providers from abusing automatic authorization. Hence, an RFA remains required.

Myth #2: Failure to respond to an RFA implies authorization

Depending on the type of RFA (Expedited, Prospective, Concurrent, or Retrospective), the Division of Workers’ Compensation (DWC) enforces clear deadlines for claims administrator responses, as follows: 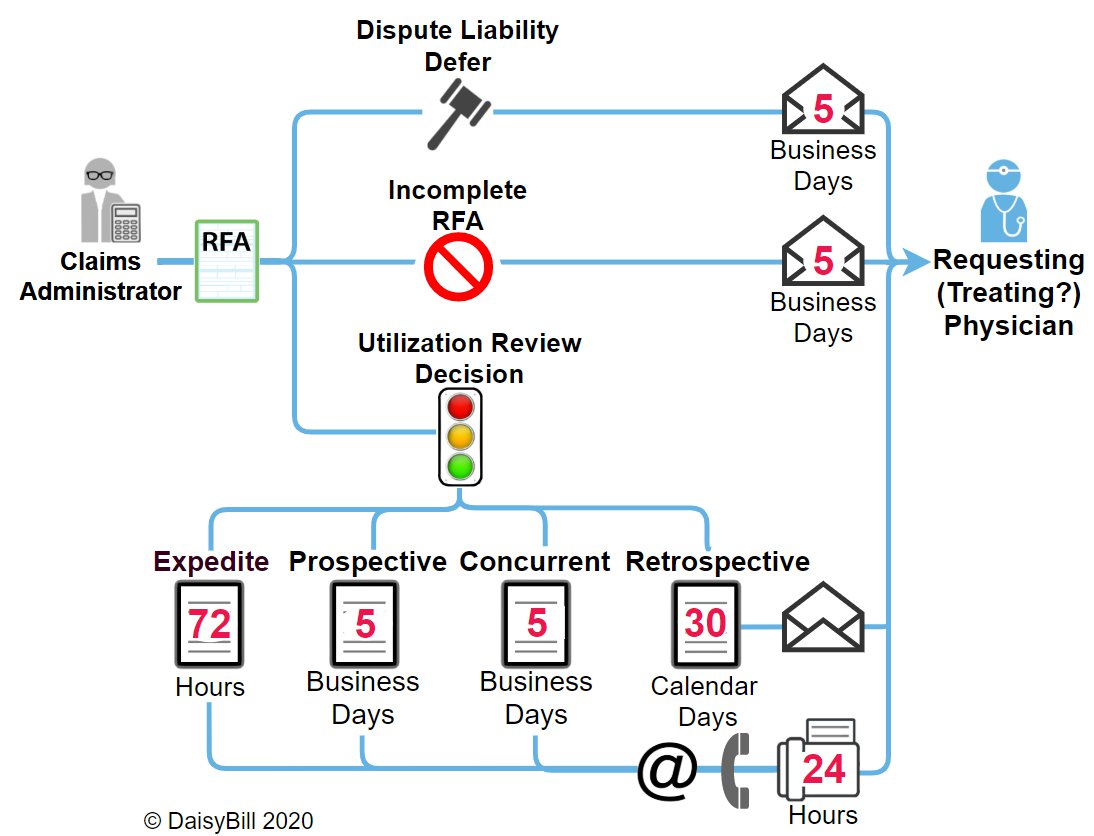 The consequences for failure to meet these deadlines can be significant, again depending on the type of RFA. But “authorization granted” isn’t one of those consequences. All a provider can do in the absence of a response to an RFA is submit an audit complaint and deter claims administrators from shirking their duty.

That’s not to say providers cannot treat injured workers before receiving authorization; for example, providers should never delay providing emergency treatment, regardless of authorization. That said, providers must ultimately obtain — not just request — authorization for any and all treatment.

Myth #3: RFAs may be sent with bills to the claims administrator

Some providers mistakenly believe that because authorization and payment ultimately come from the same source — the claims administrator — that it’s reasonable to send RFAs and bills together, to the same address or fax number.

It’s an understandable mistake, but a mistake nonetheless.

Claims administrators, to put it bluntly, sometimes do very little claims administering. Insurance companies, employers, and third-party administrators (TPA) often delegate the tasks of UR and bill review to other, entirely separate entities. Which means that RFAs should be sent to those other entities.

Authorization, like everything else about workers’ comp regulations, is what may generously be termed a hot mess: convoluted, burdensome to the provider, and unhelpful to injured workers. But while this friction-heavy system remains in place, all we can do is arm ourselves with the knowledge to navigate it.

DaisyBill’s Fee Schedule Calculator, the foundational tool of our DaisyWizard, automatically calculates reimbursements using the most recent Medicare files and DWC reimbursement formulas. Also, if you ever need to look up a historical rate, simply enter the date of service and billing code, then voila! Your expected reimbursement awaits you in all its mathematically accurate glory.