In a classic case of the left hand not knowing what the right is doing, Broadspire processed and paid providers’ e-bills, then subsequently, Broadspire sent those providers strange “provider request letters” claiming that Broadspire could not process the (already processed) e-bills.

Broadspire sent providers these confusing, inaccurate letters describing non-existent problems with paying the e-bills — despite the fact that Broadspire had already returned Explanations of Review (EORs) for all but one of the bills in question (an EOR for which arrived within days of the letter).

daisyBill clients should ignore these erroneous provider request letters from Broadspire. daisyBill transmits all e-bills compliantly, and automatically alerts our clients of any legitimate problems or delays in e-bill processing.

Just to be safe, we advise non-daisyBill providers receiving Broadspire provider request letters to confirm that all e-bills for Broadspire were processed and paid.

Each letter asserted a (false) problem such as:

In every case, Broadspire’s complaint about the (processed and paid) e-bill was demonstrably untrue.

The majority of letters received by daisyBill providers cited “Bill not submitted on required standard form.” Yet daisyBill submitted each of the bills in question electronically in the required ‘837’ file format. Moreover, for each bill, Broadspire returned the required electronic ‘277 Acknowledgment’ confirming Broadspire’s receipt of the complete, compliant e-bill.

In the most recent example, Broadspire falsely claimed “The Billing Provider SSN or Tax ID is missing.” 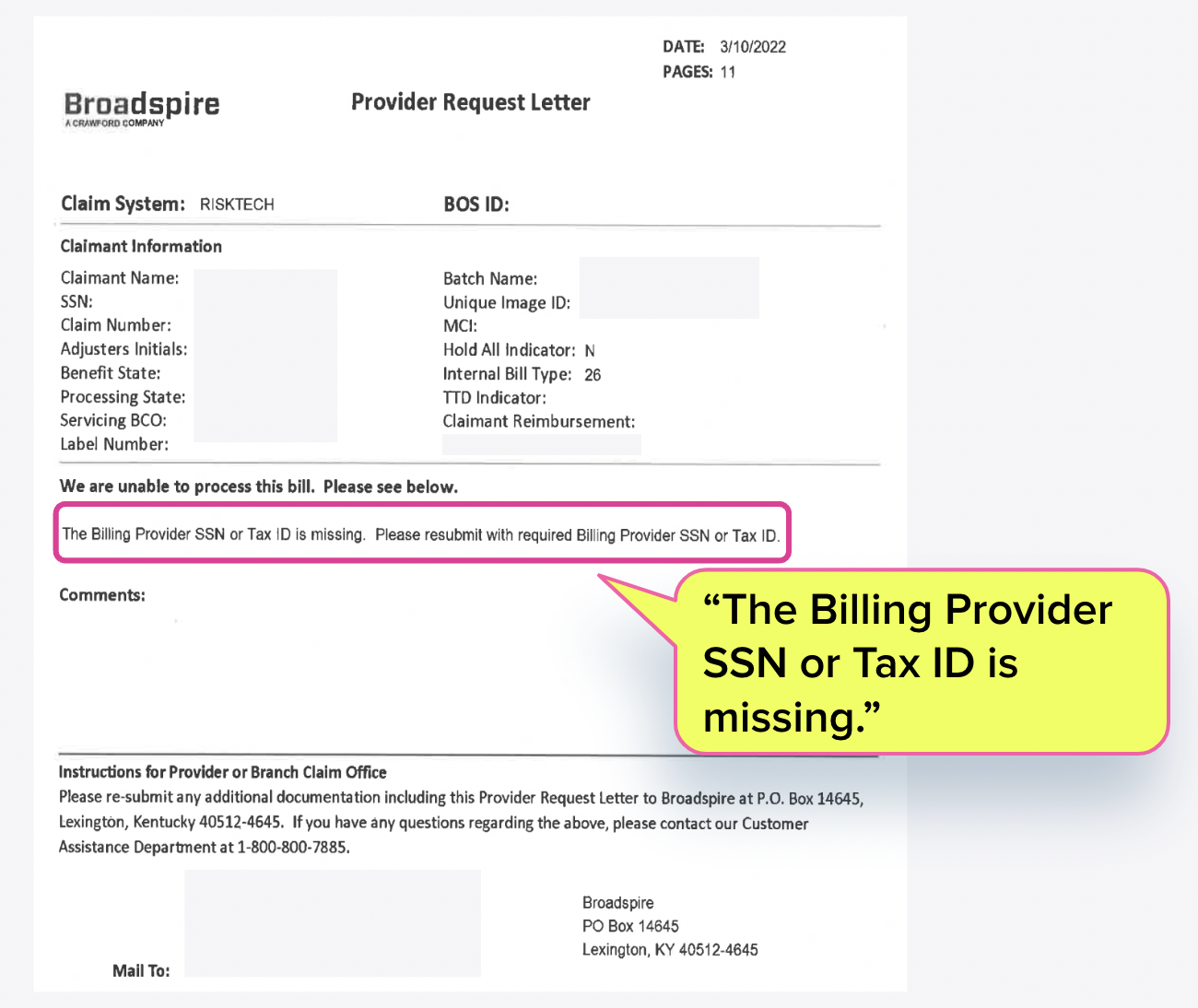 daisyBill software can instantly generate a completed paper CMS-1500 form for any bill, including those sent electronically in 837 format. For the bill referenced in the letter above, the CMS-1500 clearly shows that the provider included their Tax ID (in this case, an Employer Identification Number):

Most importantly (and once more for the cheap seats), Broadspire processed all the bills in question, and returned EORs and payment before sending these inaccurate letters. In other words, Broadspire incorrectly claimed to have denied bills that Broadspire already paid.

This is a teachable moment.