We also explain how to appeal these improper AME -94 denials to dispute the incorrect reimbursement.

Medical-Legal providers, it is important to understand that the California workers’ comp appeals system incentivizes claims administrators to improperly deny AME reimbursements. Once a claims administrator refuses to correctly reimburse an AME, the AME evaluator must always dispute the incorrect payment by sending a timely Second Review appeal, and the evaluator must be willing to pay $180 to file for Independent Bill Review (IBR).

Nevertheless, from our extensive experience, AME evaluators that follow these appeal instructions will recover enough funds to outweigh the $180 IBR filing fee, and the administrative expenses incurred due to the grossly lopsided appeals process.

Even though California payers 1) refuse to reimburse the provider the $180 to file for IBR, and 2) refuse to pay the mandated self-executing penalty and interest, the financial analysis below reveals that a provider should still always dispute improper reimbursement for AME services.

California CCR Section 9795, generally referred to as the MLFS, outlines the reimbursements for services furnished by Medical-Legal evaluators. According to §9795(d), modifier -94 for AME services multiplies the reimbursement for ML201, ML202, and ML203 by a factor of 1.35 (or 1.45 when reporting ML201 or ML202 and an interpreter is utilized):

If your practice is incorrectly denied the increased AME reimbursement under modifier -94, proceed as follows:

Within 90 days of receiving the Explanation of Review (EOR) from the claims administrator, submit a Second Review appeal using Division of Workers’ Compensation (DWC) Form SBR-1. We recommend including the following appeal language:

For an example, see the SBR-1 form daisyCollect recently submitted on behalf of a provider client denied reimbursement for modifier -94 with billing code ML203. In all likelihood, the claims administrator will decline to remit the disputed amount in response to the Second Review appeal. The only remaining option then is to request IBR from Maximus, the DWC’s designated IBR organization.

First, assemble a compliant IBR request, which must include:

Important: Submit the IBR request within 30 days of receiving the final EOR in response to the Second Review appeal, and concurrently send a copy of the IBR request and supporting documents to the claims administrator.

On the DWC Form IBR-1, include the same payment, dispute details, and appeal language used in the Second Review appeal, adding an extra page if necessary.

For the example disputed referenced above, daisyCollect submitted the DWC IBR-1 form below, along with the other required documentation: 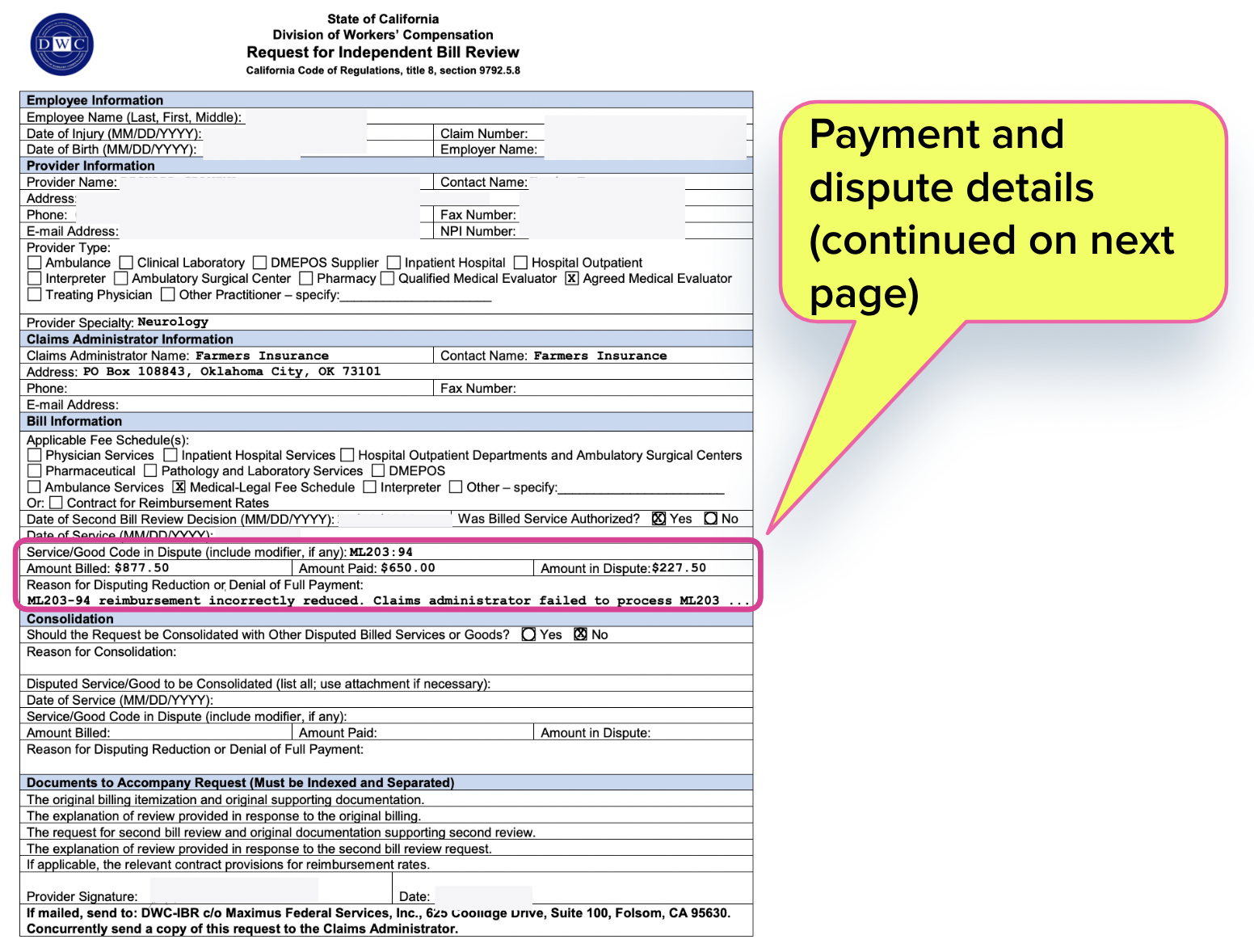 If the DWC deems the dispute eligible for IBR, and Maximus rules in the provider’s favor, the claims administrator owes the provider:

There is no guarantee the DWC will deem a given dispute eligible (even when the dispute is undeniably eligible), nor that the provider will win at IBR. But the inequities of the appeals process notwithstanding, we urge California AMEs to always insist on correct reimbursement, even when the claims administrator plays “IBR Chicken.”

daisyBill makes requesting IBR easier and faster, with tools for quickly completing and assembling the IBR-1 form and necessary documentation. Reach out to see how we can help protect your practice.

Nov 8, 2022 3 min read
Midwest Insurance Fails to Pay QME
If there’s any doubt regarding why California workers’ comp is facing a shortage of Qualified Medical Evaluators (QMEs), look no further than Midwest Insurance. Midwest has b...