Blog Home > Broadspire Knows No Law But Its Own

Broadspire Knows No Law But Its Own

Broadspire continues to break the rules, seemingly confident that California regulators will not hold the claims administrator to account.

For months, we reported on Broadspire’s noncompliance regarding Second Review appeals. DaisyBill representatives contacted Broadspire and its clearinghouse to explain California requirements. As shown below, we thoroughly documented Broadspire’s refusal to act compliantly, and filed audit complaints with the Division of Workers’ Compensation (DWC).

But in the absence of decisive enforcement action, Broadspire continues to act as though they are exempt from DWC rules.

To dispute an incorrect reimbursement or payment denial, California regulations require a provider to submit a Second Review appeal in the same manner as the provider initially submitted the original bill; i.e. electronically or non-electronically.

Yet Broadspire refuses to accept electronic Second Review appeals despite the rules — and despite accepting electronic original bills. By their actions, Broadspire makes it more difficult for providers to treat the employees of every employer for whom Broadspire administers claims.

For each of the companies listed below, providers treated at least one employee only to have Broadspire deny or reduce reimbursement paid to the provider. In each case, Broadspire refused to accept the provider’s compliant electronic Second Review appeal disputing the incorrect payment.

To be absolutely clear, Broadspire’s business practice is unambiguously noncompliant with California Second Review regulations. In total, Broadspire attempted to skirt processing Second Review appeals representing over $50,000 in disputed reimbursements, to the detriment of the entire workers’ comp system.

Is Broadspire the New DWC?

DaisyBill representatives have repeatedly contacted Broadspire’s clearinghouse, Availity, about the failure to process the Second Reviews submitted electronically by providers.

Which begs the question: When was Broadspire appointed Administrative Director of the DWC?

As advocates for fair billing and payment practices in workers’ comp, we submitted multiple audit complaints against Broadspire for their abject refusal to honor compliant Second Review appeals. Below is the latest example. We intend to continue demanding compliance from this insurer.

The only question is, how long will the DWC stand for Broadspire’s noncompliance? 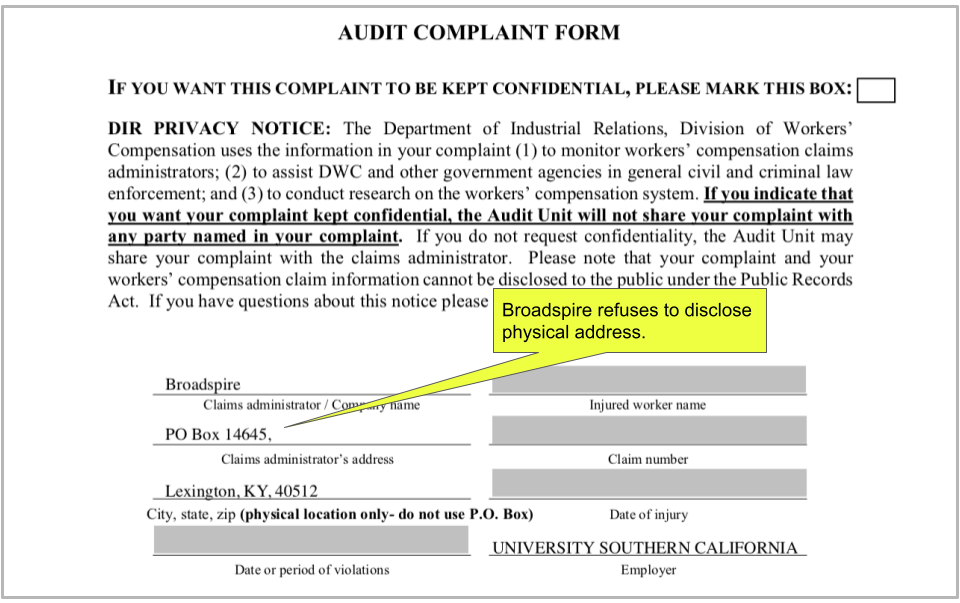 When payers misbehave, DaisyBill has your back. Our easy, instant appeal submission and tracking tools help your office stay on top of accounts receivable. Reach out to learn how.

Recently, a DaisyBill provider disputed a reduction in reimbursement from the City and County of San Francisco (CCSF) for treating an injured employee. In the Explanation of ...