Maximus Blunders AGAIN with 99358 Decision and a Math Error

Maximus Federal Services, the entity responsible for conducting Independent Bill Review (IBR) on behalf of California’s Division of Workers’ Compensation (DWC), has once again demonstrated a level of incompetence to which only a brave few can aspire.

Maximus not only fumbled its interpretation of procedure code 99358 — again — but also committed a mathematical error amateurish enough to shake whatever confidence remains in the company’s capacity as a competent arbiter of billing disputes. For the provider in question, Maximus created a nightmare scenario that would be laughable if it wasn’t so infuriatingly unjust.

The struggle by this physician to receive the correct payment for treating an injured worker paints a picture of a surreal workers’ comp landscape, one where the provider doesn’t stand a chance in the face of bewildering ineptitude.

Unbelievably, this physician was forced to submit all of the following in their attempt to receive payment:

All of the above represents an absurd expenditure of administrative resources. The dispute forced the provider’s office to waste untold hours of work repeatedly submitting documentation and filing various forms, which in this case totaled over a hundred pages as the battle escalated.

This struggle also required the  provider to remit a $195 IBR filing fee, which our past experience indicates providers must sometimes fight to recover.

The net effect of such an unsustainable dispute resolution process is that there is little or no incentive for payors to properly process providers’ bills. Since most providers cannot possibly endure the struggle described above, the deck is stacked in the claims administrator’s favor.  A legislative fix is required that offers providers protection against this abuse.

Maximus, in their IBR Analysis and Finding, asserted that Zenith’s denial of payment was valid for two reasons:

As Maximus stated in their explanation upholding the denial of CPT 99358:

The summary of records does not include the receipt date of the records (refer to code description) and does not  indicate that the Provider “personally performed” the review of each entry as the summary is unsigned by the Provider (Federal Register/Vol.81, No 220).

But nowhere in the actual rules, nor in any Division of Workers’ Compensation (DWC) regulation, is there a requirement to establish the date of receipt of records to substantiate the use of the 99358 billing code. Nor is there a requirement for the physician to sign the records summary to prove that he or she personally reviewed them.

So where is Maximus getting this stuff?

Maximus supported its conclusion that failing to provide the date of receipt of records is grounds for denial with an incorrect interpretation of the American Medical Association (AMA) Current Procedural Terminology (CPT) code book. Below is the “code description” Maximus included in its Findings and Analysis, with Maximus’ own emphasis in bold:

This service is to be reported in relation to other physician or other qualified health care professional services, including evaluation and management services at any level. This prolonged service may be reported on a different date than the primary service to which it is related. For example, extensive record review may relate to a previous evaluation and management service performed earlier and commences upon receipt of past records. However, it must relate to a service or patient where (face-to-face) patient care has occurred or will occur and relate to ongoing patient management. A typical time for the primary service need not be established within the CPT code set.

As the excerpt reveals, the Maximus bill reviewer confused an example with a rule. While the universal requirements are clear, the example regarding extensive record review is just that: an example. In this example, the AMA states that record review “commences upon receipt of past records.”

But nowhere does it say that providers must provide the “receipt date of the records.”

To support the incorrect notion that the provider’s signature is required on the summary of records reviewed, Maximus reached deep into thin air and pulled out Federal Register Volume 81, Number 220.  While the Federal Register represents a wealth of commentary and discussion on various regulations, nothing contained in the Register is binding until the DWC specifically adopts the relevant portions.

The simple fact that the DWC has not adopted Federal Register Vol. 81, no 220 is enough to end the discussion. But for good measure, it’s also worth pointing out that the Register doesn’t support Maximus’ position in any event. Nothing in the register declares the signature requirement Maximus references.

There’s no question that Maximus is wrong here. The only real question is how Maximus found so many different ways to be wrong about one billing code. Yet again.

99215 for Evaluation of an Established Patient

In the same decision, Maximus agreed that Zenith incorrectly reimbursed the provider for code 99215. Per the Official Medical Fee Schedule (OMFS), reimbursement for the date of service in question amounts to $200.52. Zenith paid $149.33, which is $51.19 short of correct reimbursement.

Maximus recognized Zenith’s mistake, and agreed that Zenith owed the provider the $51.19 difference.

Since the claims administrator must also reimburse the provider for the $195 filing fee when Maximus rules in the provider’s favor, Zenith should owe a total of $246.19. However, Maximus subsequently ordered that Zenith pay the provider a total of $143.81. 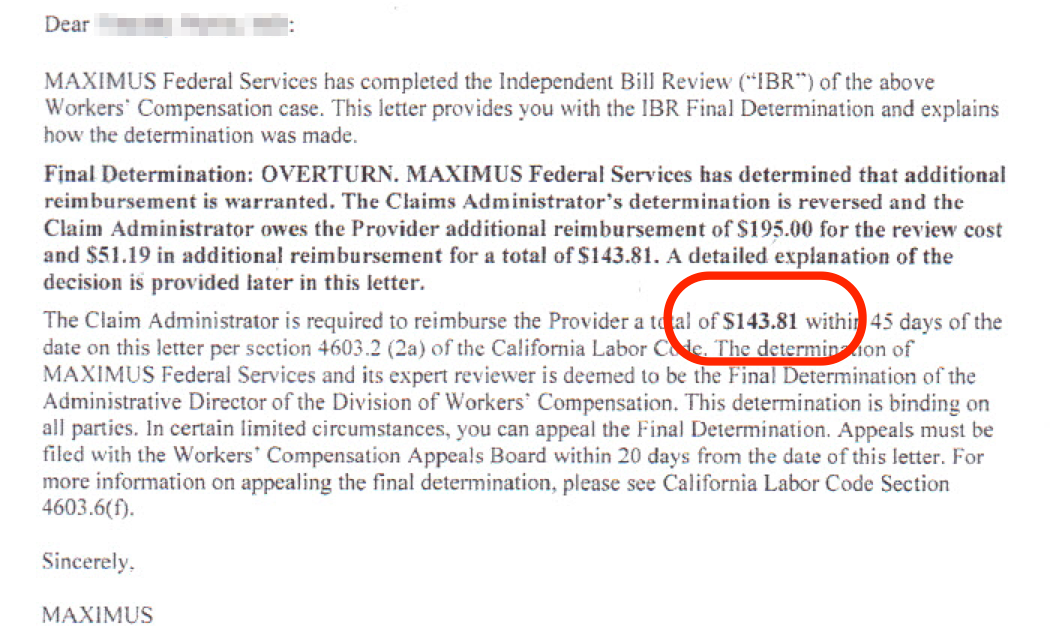 How Maximus arrived at this number is either tragically comic or comically tragic.

Take all the time you need to process that, dear reader.

Mind-boggling doesn’t begin to describe a scenario in which a global private firm, paid with taxpayer dollars to determine the amount owed in billing disputes, can issue a determination with an error that wouldn’t have made it past the discerning eye of a 3rd-grade math whiz.

As of this writing, Maximus continues to enjoy the faith of the DWC. But with each new blunder, that faith seems more and more sadly misplaced.

Maximus may not be overly well-versed in workers’ comp billing and payment, but DaisyBill is. Our Billing Software generates compliant requests for authorization, bills, and appeals at lightning speed. Schedule a free demonstration today.

Below, we document the flouting of workers’ compensation law by AmTrust North America (AmTrust), and its continued refusal to reimburse a provider despite being ordered to do...