Third-party claims administrator (TPA) Helmsman, acting on behalf of self-insured employer Costco, refused to reimburse a physician evaluator for the correct number of pages of medical records reviewed for a Medical-Legal report — despite the exact page count being attested to by the requesting attorney, and verified by the physician, as mandated by law.

We’ve seen this before, too many times. It’s enough to make one wonder whether some improper reimbursements are truly errors, or a purposeful gamble by claims administrators hoping to keep providers’ reimbursements.

Serving as the TPA for Costco, Helmsman refused to reimburse the physician evaluator for the correct number of units reported for record review under MLPRR. Subsequently, Helmsman reiterated their denial after the provider submitted a Second Review appeal.

Once the evaluator coughed up the $180 IBR fee, Costco/Helmsman had an immediate payment epiphany, and paid the doctor the disputed amount (plus penalty and interest payments) before Maximus (the entity which conducts IBR on the state’s behalf) could issue its decision.

Here’s a quick rundown of the payment abuse Costco/Helmsman inflicted on this Medical-Legal doctor:

As the summary above indicates, on April 6, 2021, the applicant attorney sent the physician 926 pages of medical records to review. Subsequently, the defense attorney dropped another 983 pages of records at the doctor’s door on April 15, 2021.

As seen below, both attorneys included the proper declaration and attestation with the records, in compliance with California Code of Regulations Section 9795. 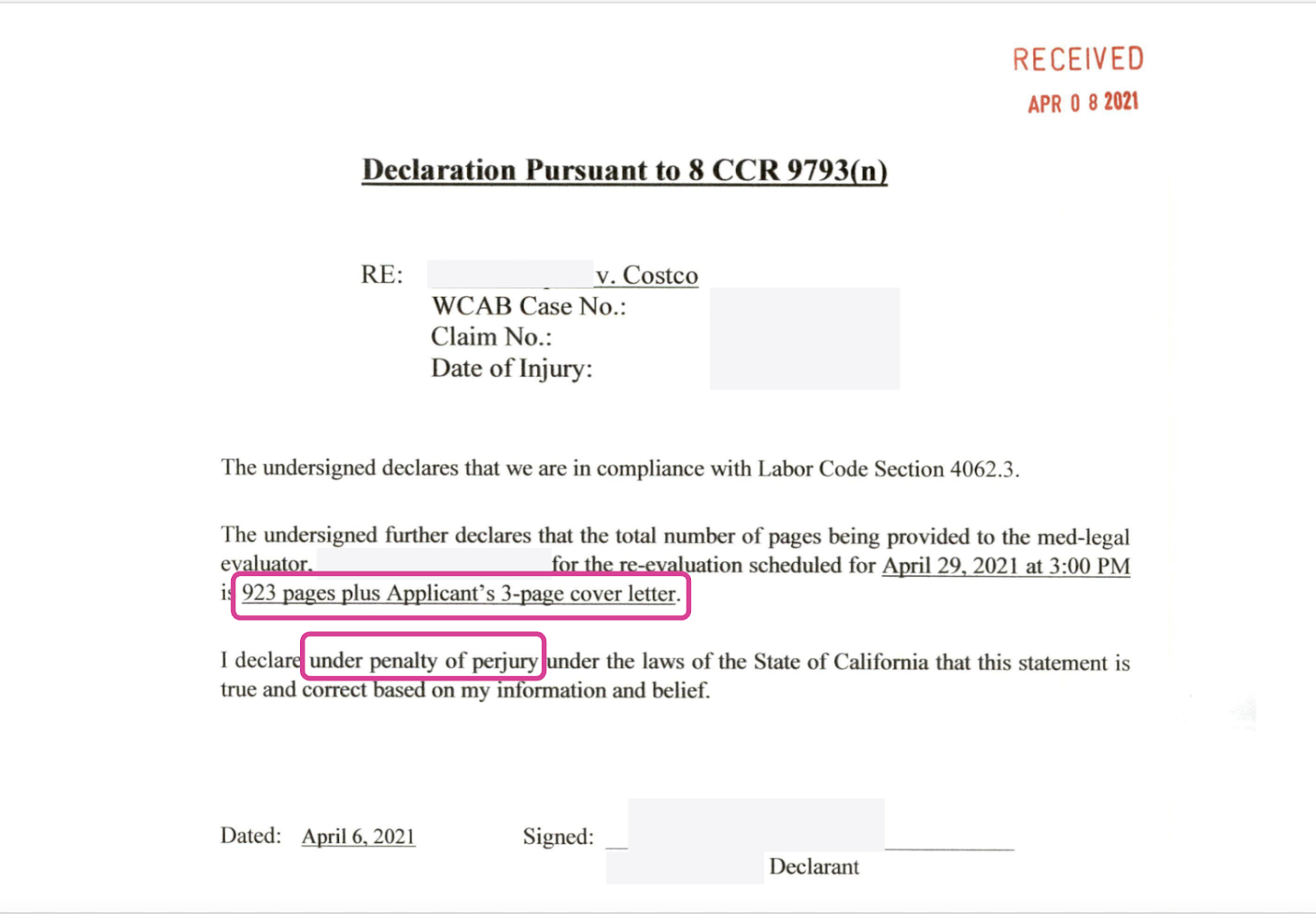 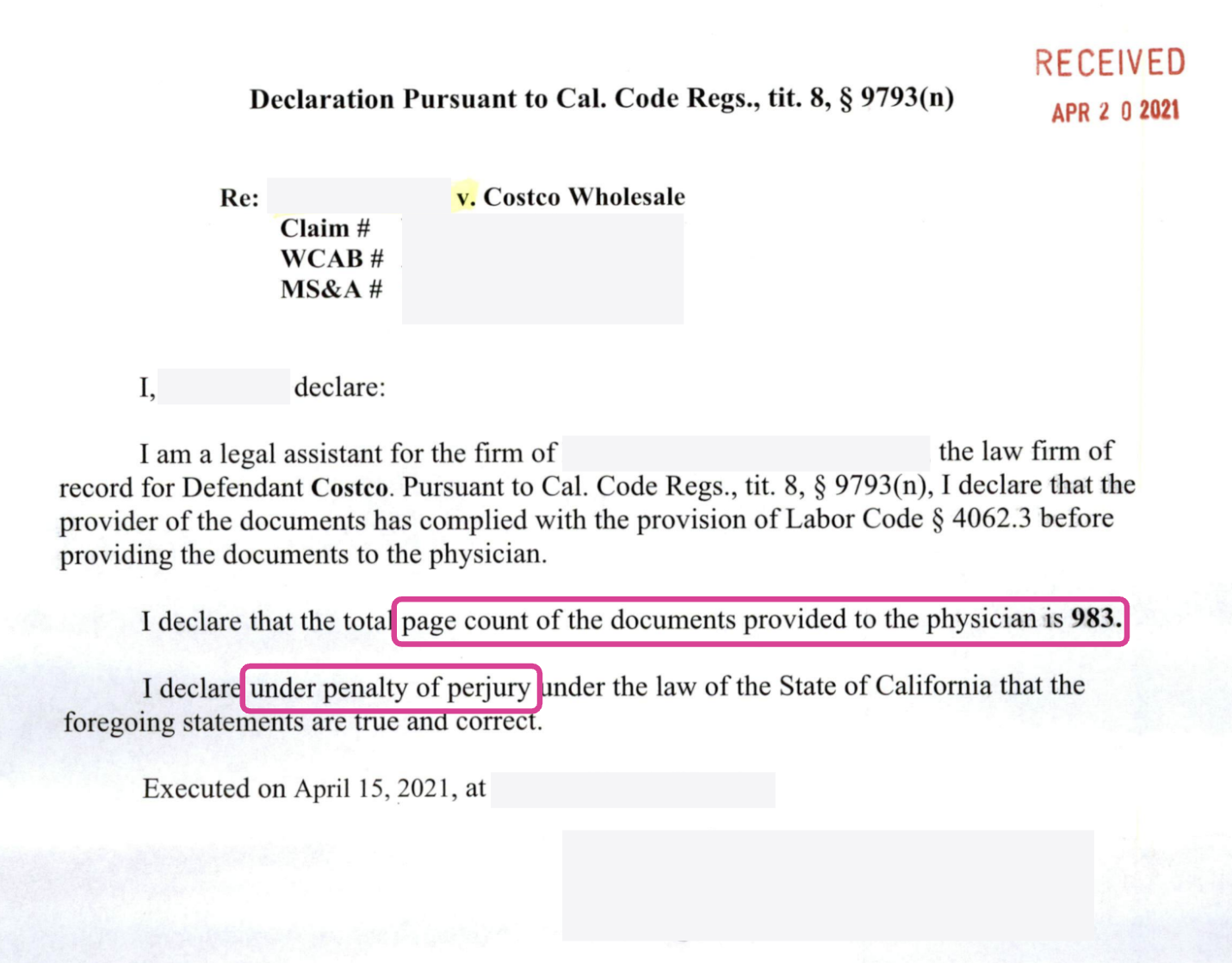 On June 22, 2021, Costco/Helmsman cut the physician a check for $2,349 — less than half of the amount due per the Medical-Legal Fee Schedule (MLFS). The incomplete payment covered only 783 pages of medical record review, and shortchanged the provider by $2,778.

The physician submitted a Second Review Appeal requesting payment for the remaining 926 pages of record review. Costco/Helmsman denied the appeal and declined to provide further reimbursement — until the physician paid $180 to request IBR.

Fortunately, daisyBill providers don’t get their feathers ruffled when payers choose to play IBR chicken. After the provider paid $180 to request IBR, Helmsman and Costco voluntarily paid the disputed amount, plus penalties and interest, prior to the official ruling from Maximus. 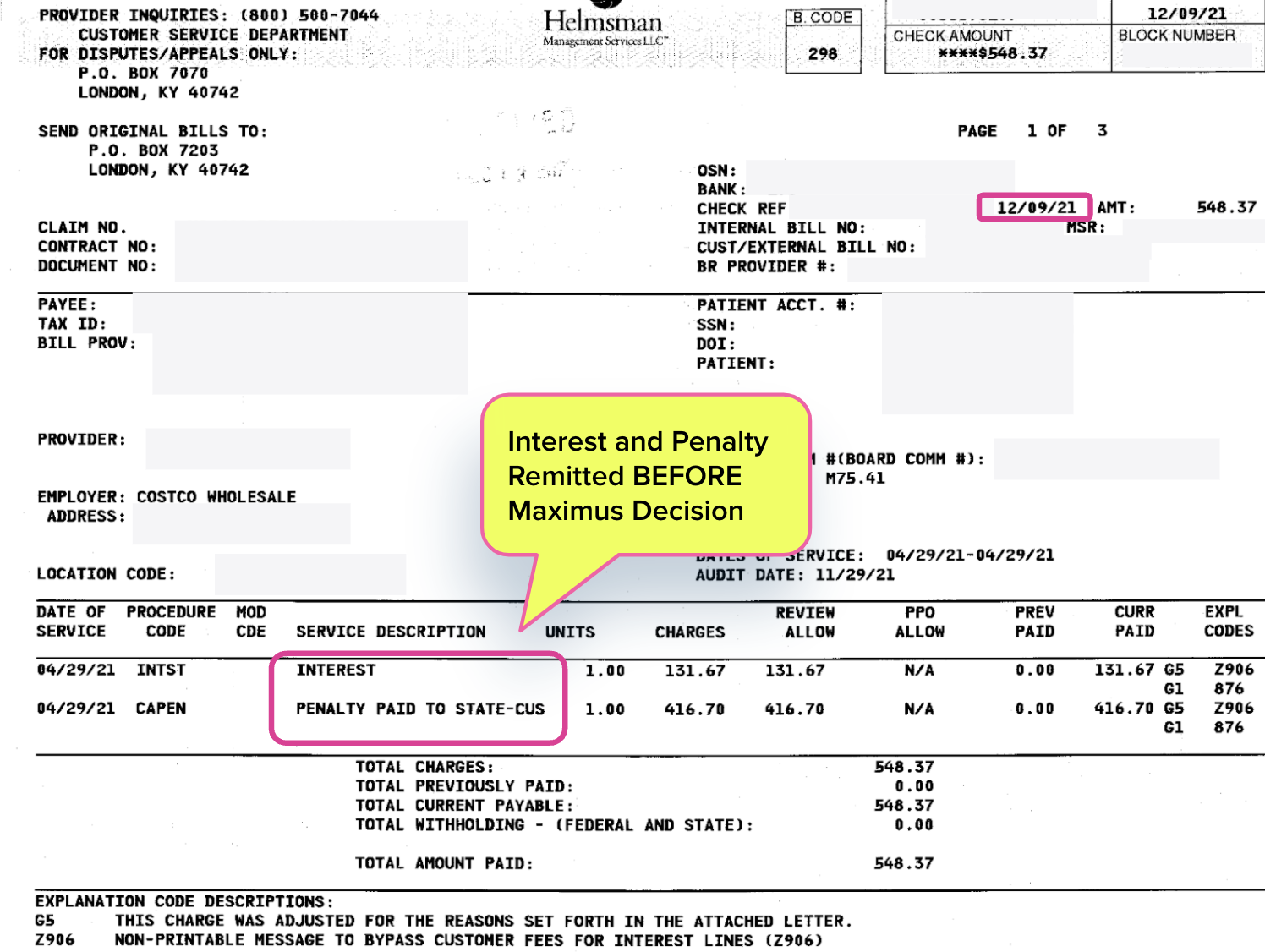 In a letter dated December 30, 2021, Maximus ruled in favor of the physician. Maximus explained that Helmsman owed the physician a total of $2,958: $2,778 for unpaid MLPRR charges PLUS $180 as reimbursement for the IBR filing fee. The Maximus ruling was no surprise, given that the attorneys stated under penalty of perjury exactly how many pages were sent to the physician.

Despite jumping the gun and paying penalties and interest ahead of Maximus’s decision, Costco and Helmsman have yet to reimburse this physician for the $180 IBR filing fee.

California’s Office of Self Insurance Plans (OSIP)’s website shows that Costco’s Self-Insured Verification status has been revoked before.

How Long Until DWC Enforces MLFS?

Given that so many months have passed since the introduction of the new MLFS, we wonder: How long until the Division of Workers’ Compensation (DWC) begins to actually penalize payers for failing to adhere to the MLFS payment guidelines?

This Costco/Helmsman payment friction perfectly demonstrates how California physicians are expected to do their own jobs and that of the claims administrator and that of enforcement.

Making sure that claims administrators adhere to the MLFS should not be the physicians’ responsibility.

Physicians dedicate extra hours to reviewing thousands of pages of medical records, and even more time and administrative resources to challenging improper adjustments. All of this, only for claims administrators to back down at IBR or Second Bill Review, claiming that withholding payment was done in “error” the whole time.

daisyBill knows the rules, even when claims administrators don’t follow them. Chat with us to learn how our technology and expertise can protect your revenue from payer noncompliance.