We are again chronicling the reimbursement pandemonium inflicted on providers by the current California Second Review appeal and Independent Bill Review (IBR) processes.

This time we report on how California’s State Compensation Insurance Fund (SCIF) incorrectly disputed compliant IBRs filed by a doctor who challenged the incorrectly denied Second Review appeals the provider had previously sent to SCIF.

Today’s article continues the wrongful payment saga endured by a doctor, as SCIF draws out the process from incorrect underpayment of seven original bills, followed by seven incorrect denials of the doctor’s Second Review appeals, and ending with SCIF incorrectly disputing three of the IBRs filed by the doctor.

The appeals process places an unfair and disproportionate burden on providers, as we’ve written about previously. Today’s example concerns one doctor’s sisyphean attempts to collect on a balance of just $24.15.

This week the doctor received, by certified mail, three objections by SCIF to the doctor’s IBRs. SCIF is mistakenly claiming that the provider failed to comply with the IBR filing requirements.

In response to the IBRs filed with Maximus, SCIF disputed the eligibility of the three IBRs based on 8 CCR §9792.5.7(f). This regulation requires the provider to serve a copy of the IBR documents to the claims administrator:

In its objection letters to Maximus, SCIF erroneously claims that the provider did not comply with the above-noted requirement:

This provider, like other DaisyBill providers, uses our technology to quickly generate compliant IBRs which automatically include the following required documents per 8 CCR §9792.5.7(f):

But you know what’s one of the most beautiful things about DaisyBill technology and the digital age? Easy and accurate record-keeping. Our software records prove that for all seven IBRs the provider sent exactly what was required by the regulation. As an example, below is a record of the exact information and documents the doctor sent to SCIF for one of the IBRs that SCIF incorrectly disputed as non-compliant.

What better proof of a broken system than a doctor enduring this payment chaos to collect $24.15 that is due per the state fee schedule? 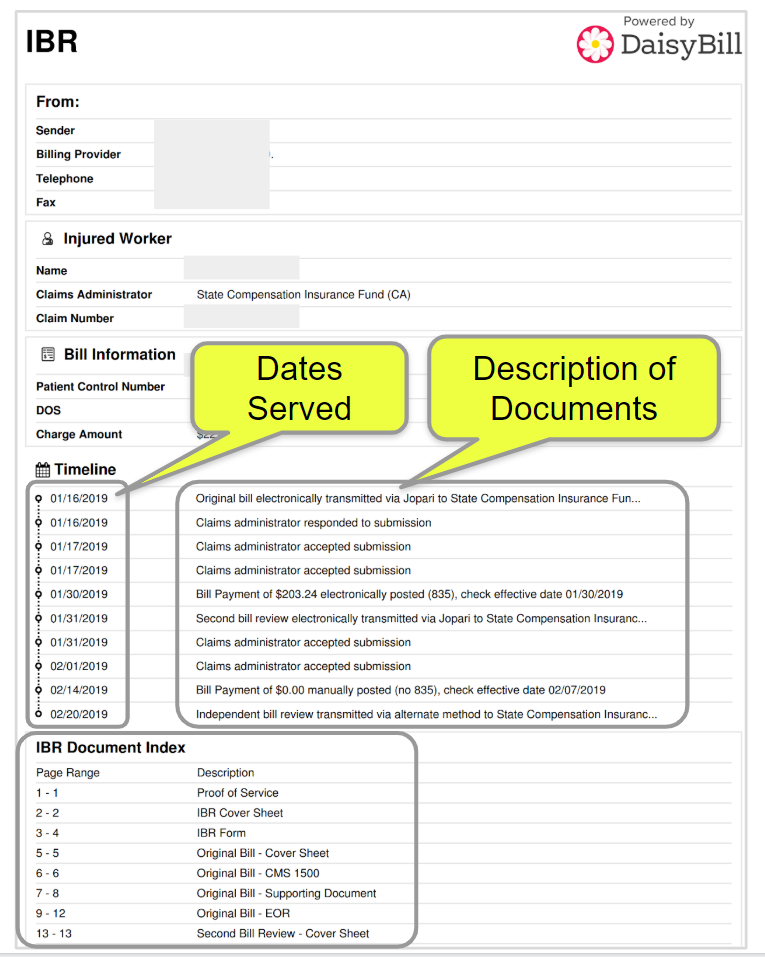 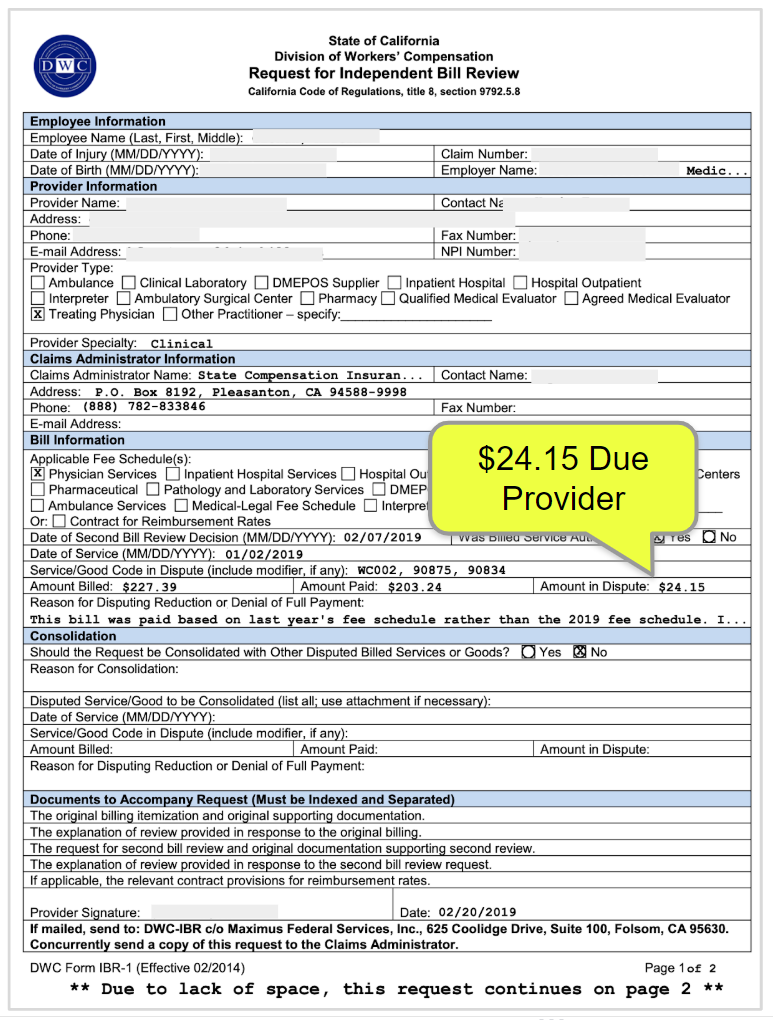 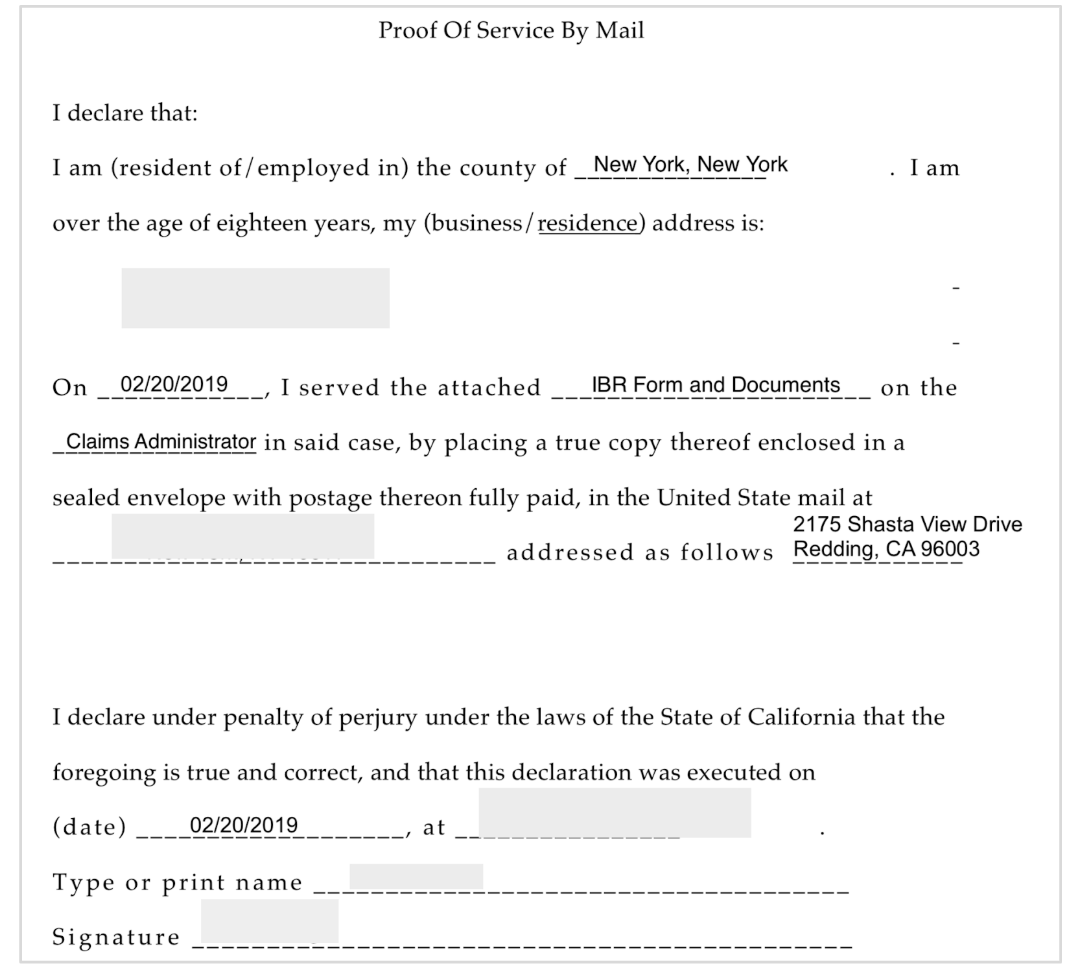 To see how DaisyBill’s meticulous bill history and other features can work for you, sign up for a demo.