We’re now in the fourth installment of our continuing series on the seemingly systematic underpayment of bills by some of the largest payers in California’s workers’ compensation system.

Each of the four payers exposed in this series -- Sedgwick, York, Liberty Mutual, and now SCIF -- used the 2018 fee schedule to underpay what may be untold tens of thousands of bills for 2019 dates of service (DOS).

Some payers may attempt to dismiss their widespread 2019 underpayment by citing a “glitch” or other vague excuse. However, in the case of SCIF, there is clear evidence that demonstrates SCIF is aware of and has the ability to apply the correct fee schedule reimbursement to 2019 bills. The example below is a single explanation of review (EOR) with multiple payments which SCIF issued on 1/30/19. Inexplicably, this EOR contains SEVEN INCORRECT 2018 reimbursements and ONE CORRECT 2019 reimbursement, the latter of which reveals that SCIF knows the correct 2019 OMFS reimbursement.

To collect the $88.98 that SCIF failed to pay the provider, California requires the provider to:

Something is drastically wrong here, but something is also CRYSTAL clear: payers’ systematic denial of providers’ Second Review appeals means that payers benefit from the deterrence effect felt by providers contemplating the next step in the appeals process; an effect produced by the extremely labor-intensive and expensive process of submitting IBRs and, subsequently, the difficulties of collecting the money due from IBR decisions.

Every California workers’ comp stakeholder should be outraged by the bill mishandling inflicted upon this provider by SCIF. In the example below, for each treatment, the provider complied with ALL of the extensive state-mandated authorization and billing requirements. The provider:

Sedgwick, York, Liberty Mutual, and SCIF are some of the largest workers’ comp payers in the state of California, with huge resources, battalions of adjusters, and, presumably, access to intelligent teams to alert these payers to the DWC fee schedule updates. Mind you, the whole industry knows these updates occur annually at the beginning of the year, and the whole industry knows to adjust for these reimbursement changes.

We can only wonder at a seemingly widespread and systematic pattern of payers NOT adjusting to these expected reimbursement changes. Especially when not adjusting to the changes means that these payers reap increased profits. Meanwhile, providers are repeatedly underpaid for treating injured workers.

Today’s example of unfair treatment traces the pain of just one provider seeking reimbursement for just seven bills submitted to SCIF. It is mind-boggling to extrapolate the following payment ordeal to all California providers that treat injured workers. 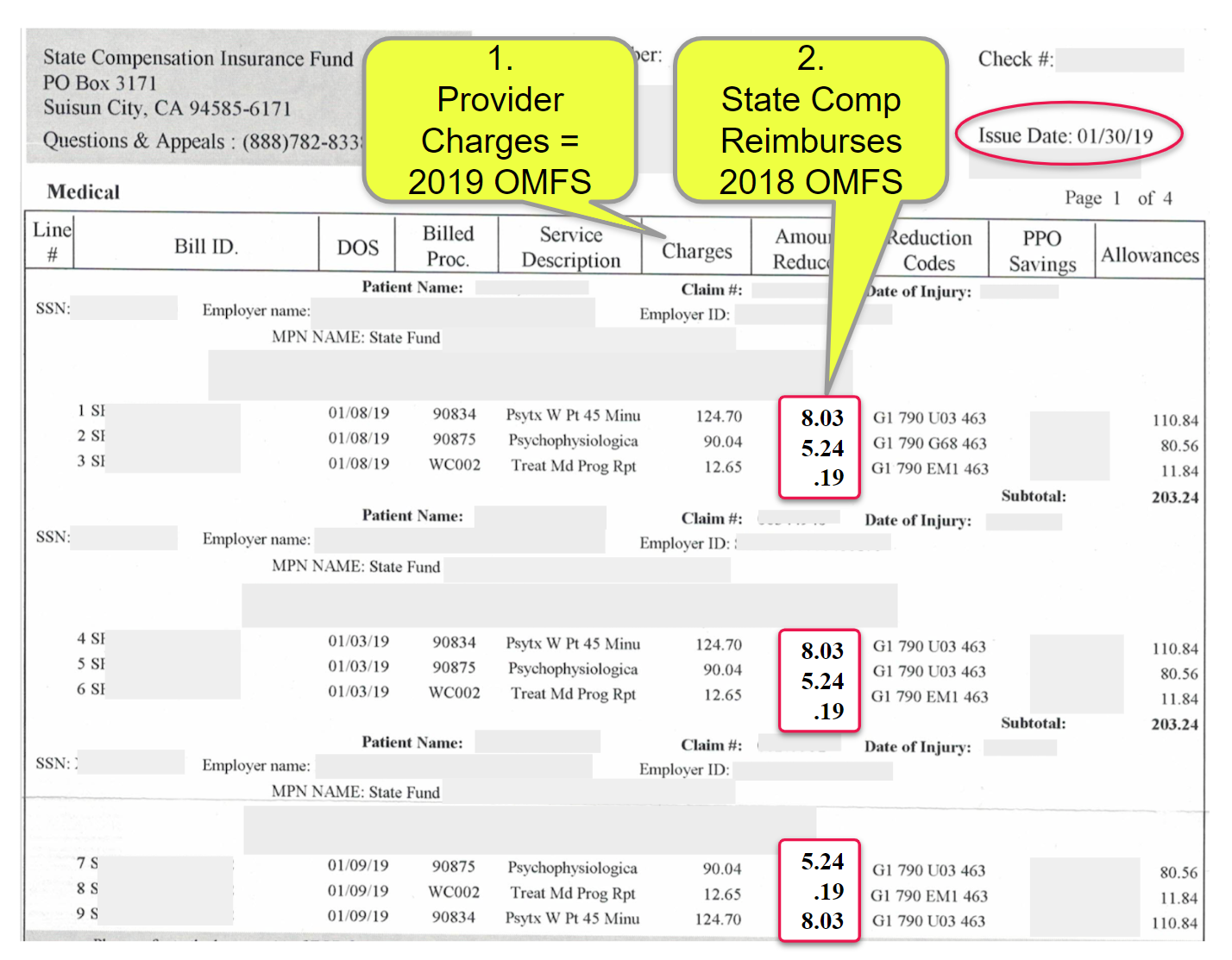 Further, these CPT codes are the new 2019 psychological testing codes which replaced CPT 96101 and CPT 96102. So SCIF is aware of these new CPT codes, SCIF reimburses these codes correctly, but SCIF does NOT reimburse the PR-2 (WC002) and other CPT codes correctly. 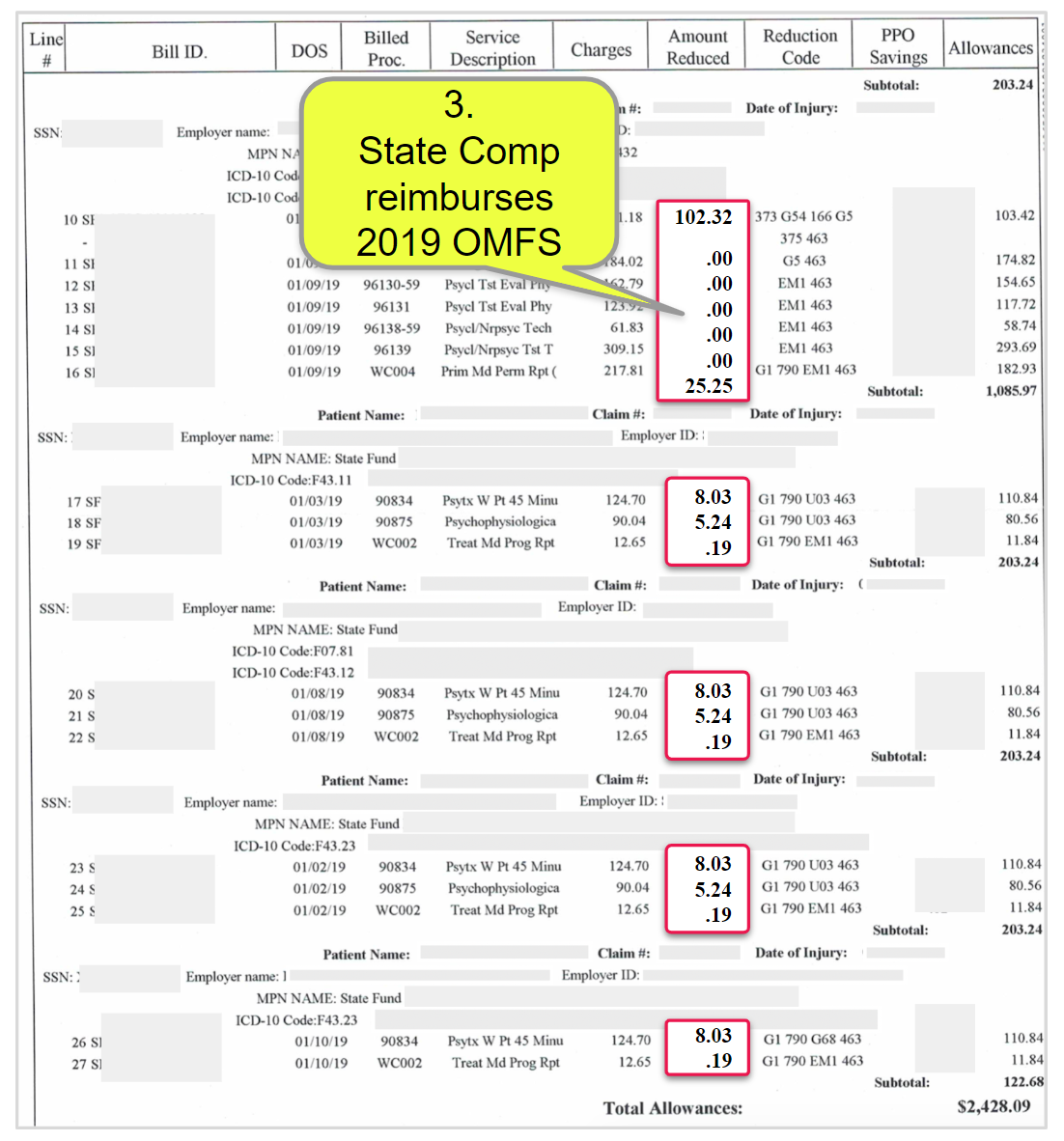 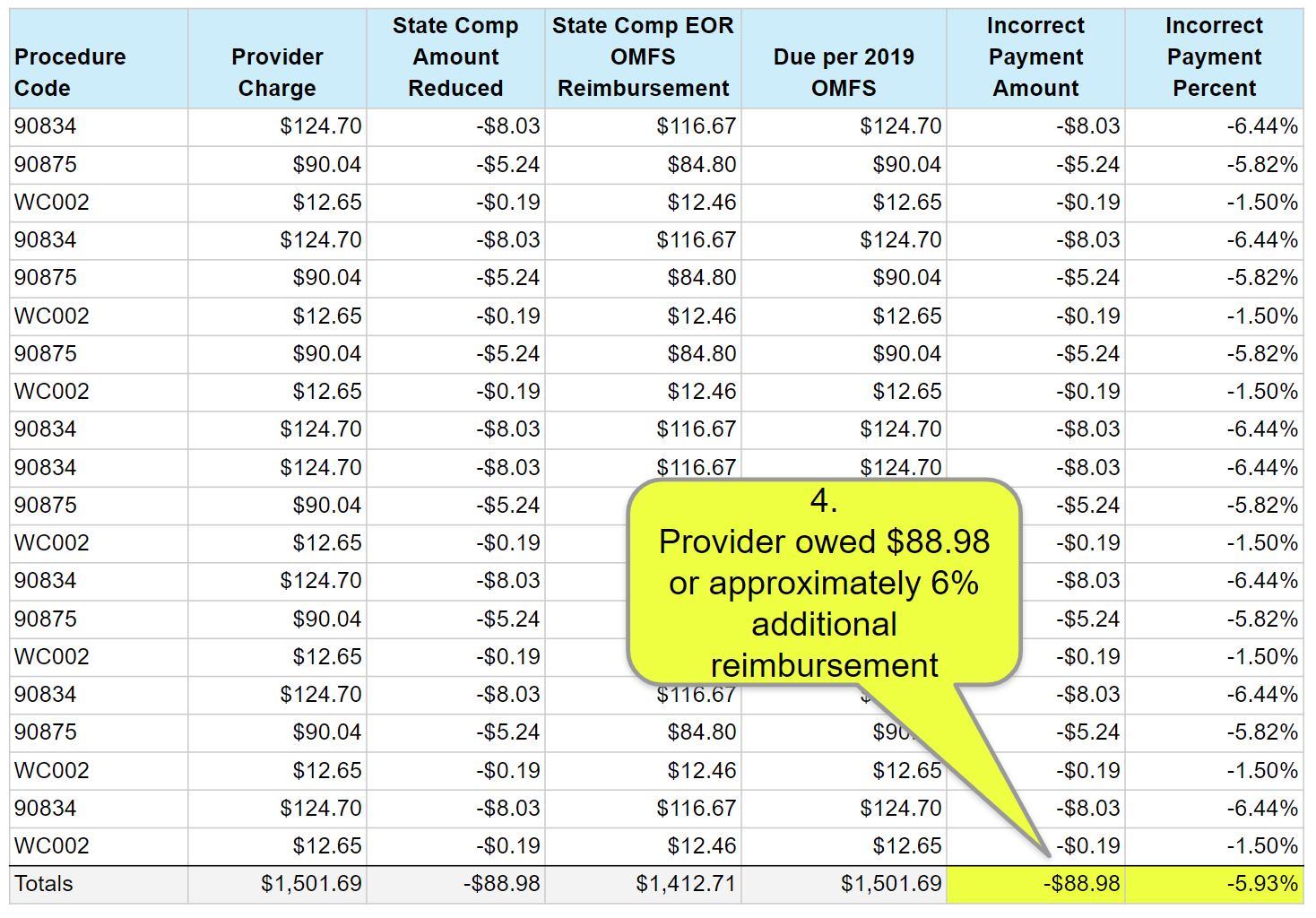 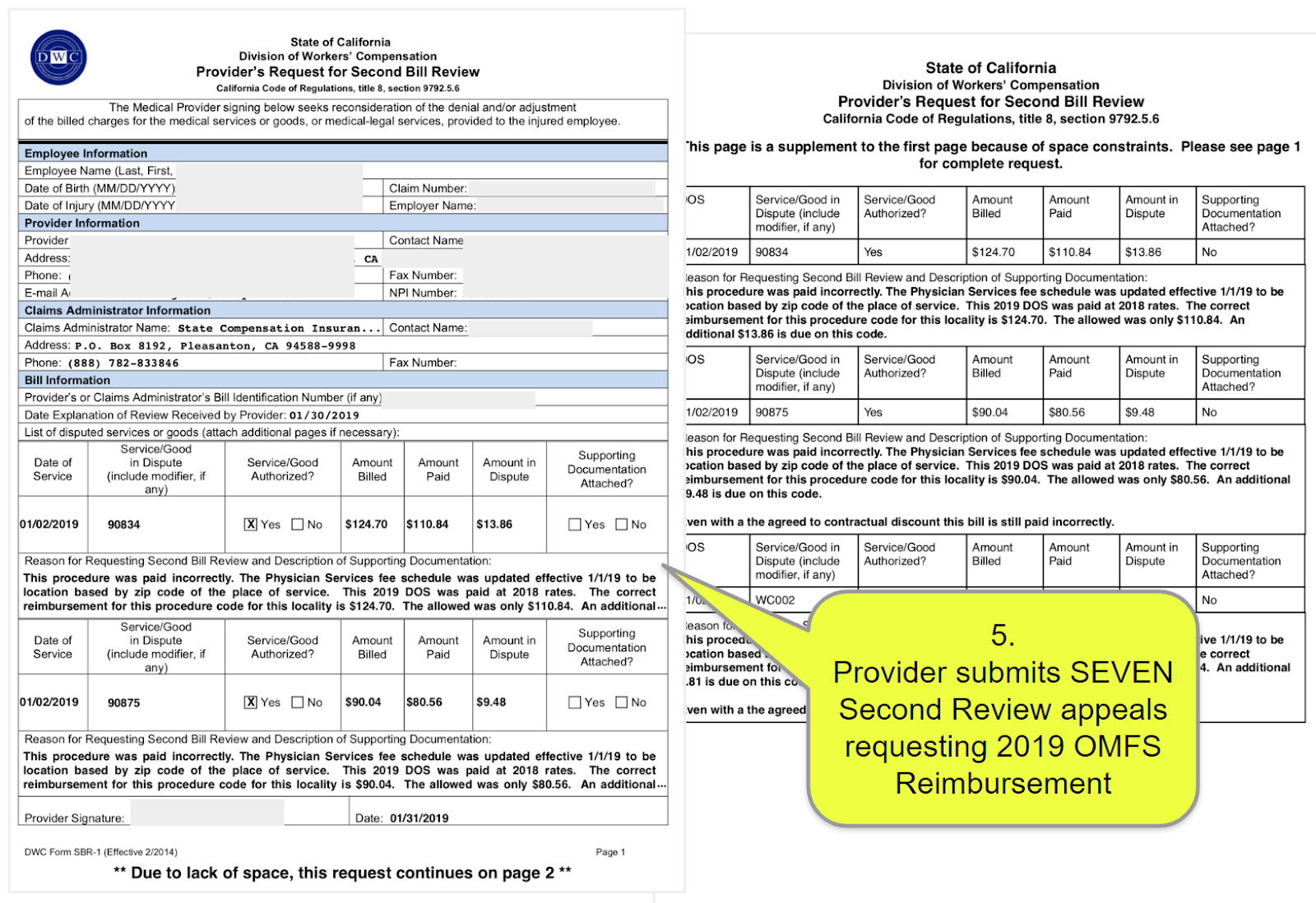 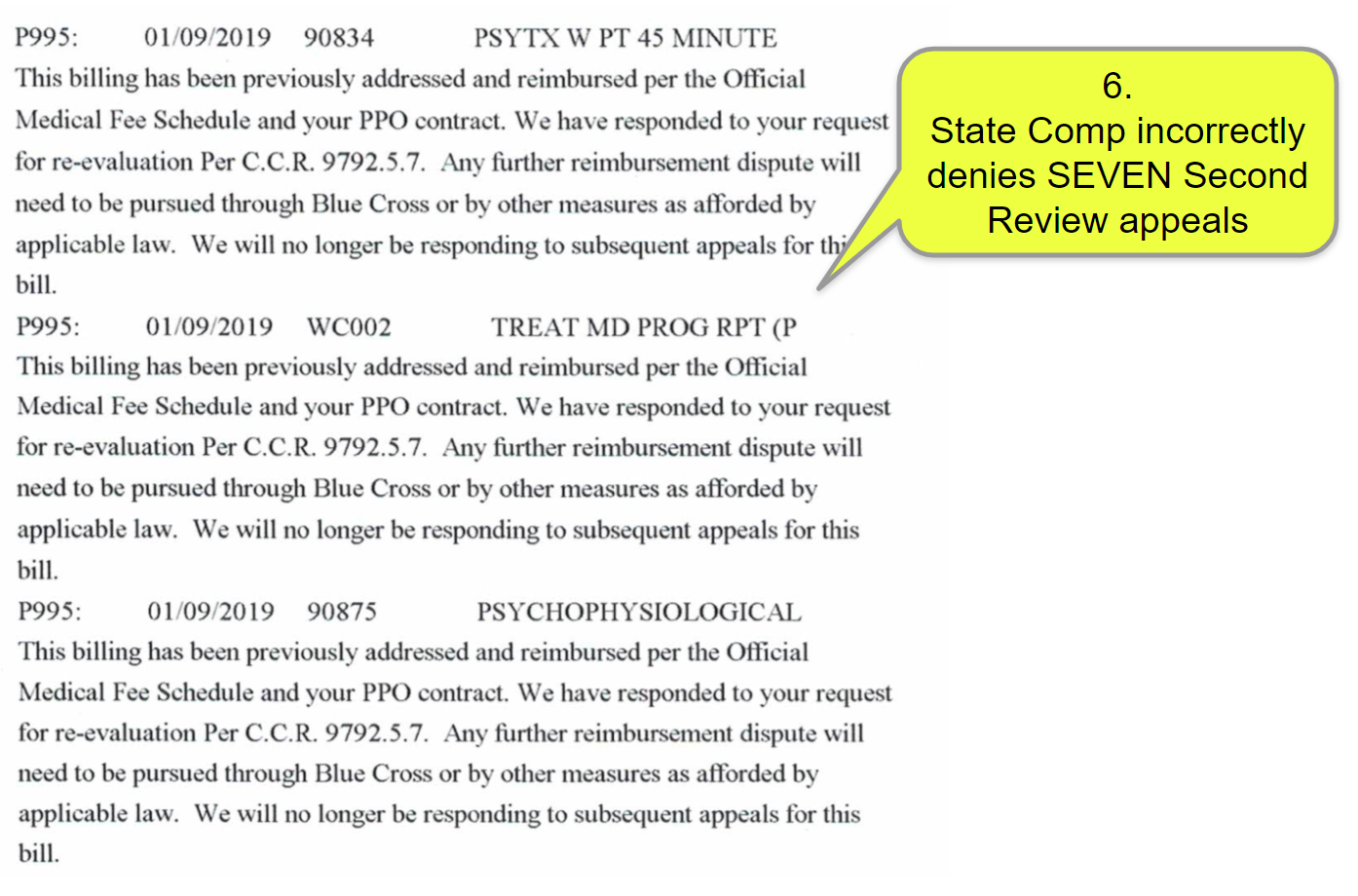 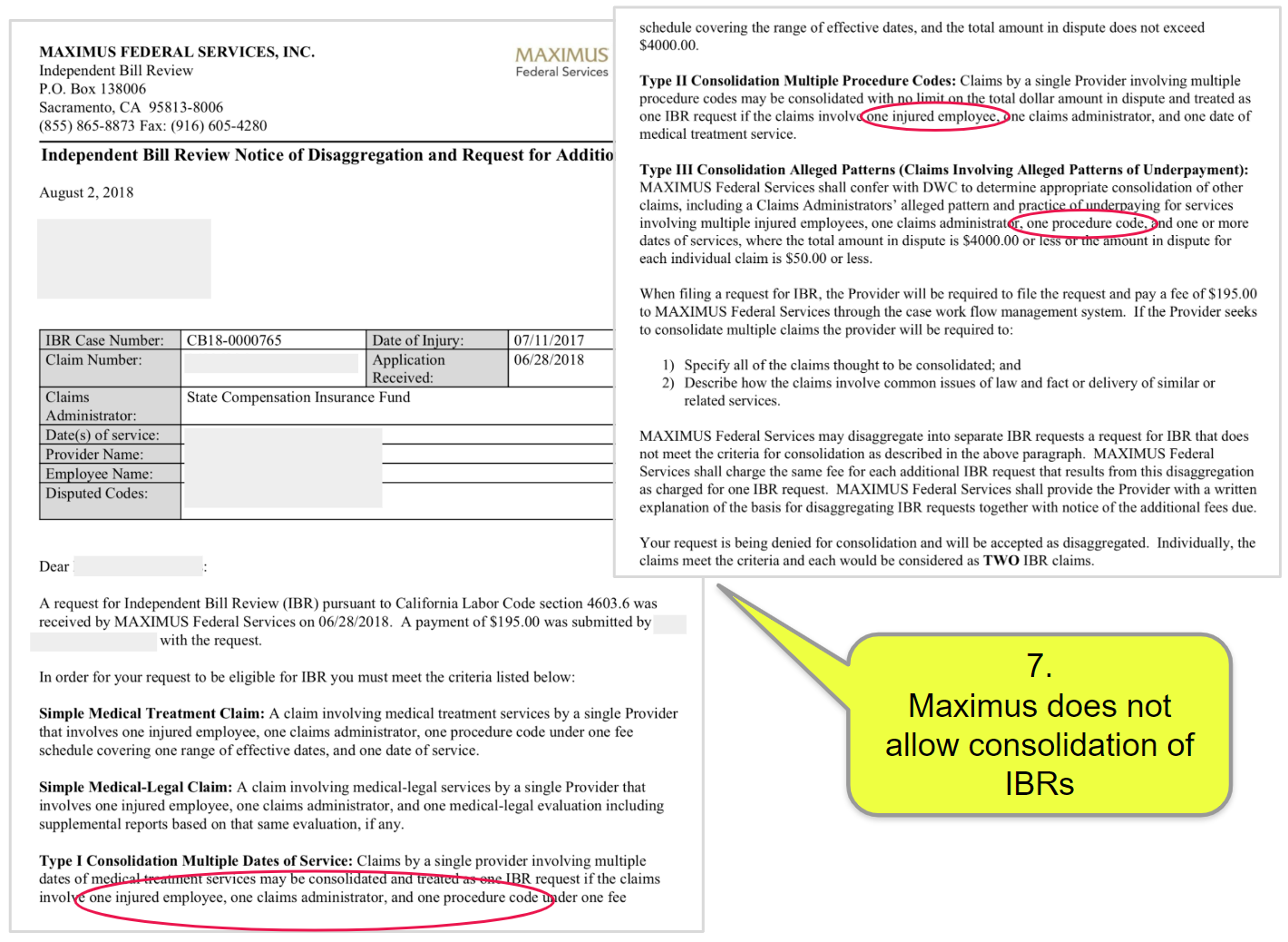 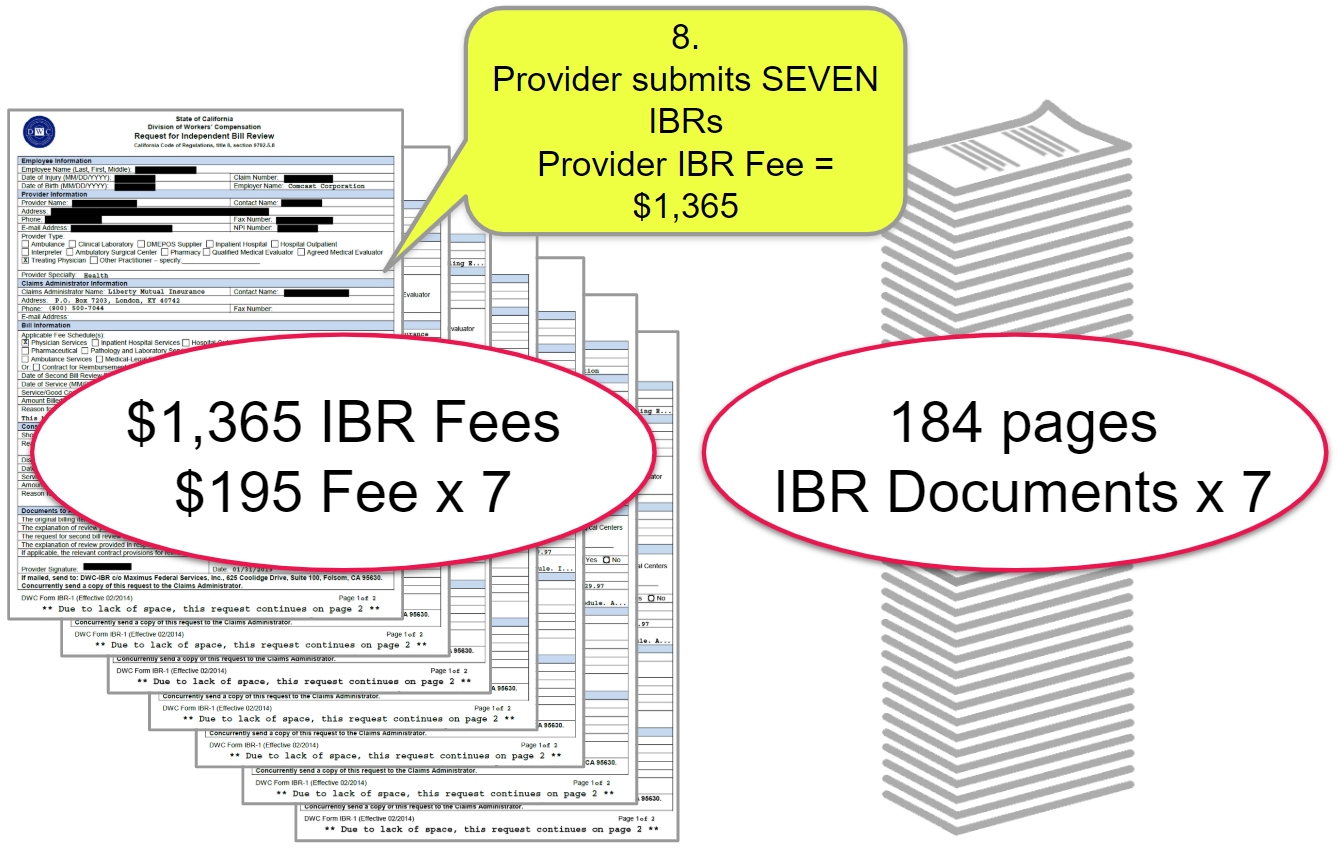 SCIF presents yet another horrifying example of a payer that benefits from the fundamental unfairness of a state-mandated administrative “appeal” system where providers must carry the burden of rectifying payer (and sometimes, Maximus) mistakes.

These payers reap profits from a pattern of underpayment by relying on this unbalanced state-mandated “appeal” system. Broken down to its essentials:

What’s more, there are ZERO consequences for these payers. No deterrents, and therefore, no incentive to process bills correctly.

Tired of underpayments? Challenging payers is a snap with DaisyBill’s powerful software. Create bills with the most current and accurate reimbursement rates and rebut inappropriate denials in three clicks with compliant Second Review appeals. Take advantage of a free demo today and see what DaisyBill does with ease.

We advise providers to think carefully before treating injured workers covered by Travelers. Below, we summarize the nightmarish run-around that an MPN provider experienced w...