Not one to avoid the spotlight, York Risk Services joins Sedgwick CMS in incorrectly applying the 2018 Physician Fee Schedule rates to services rendered in 2019. Our data show a consistent and demonstrated pattern of botched payments through at least the end of January.

Despite the vastly increased complexity of the California Physician Fee Schedule in 2019, most administrators are abiding by the changes and issuing checks for the appropriate amounts. A few stragglers remain who, for whatever reason, fail to follow the new schedule. Today, we turn our attention to York Risk Services.

Effective January 1, 2019, the California Division of Workers’ Compensation (DWC) modified the Physician Fee Schedule for all dates of service occurring in 2019. This fee schedule is updated to include the adoption of Medicare Geographic Practice Cost Indices (GPCIs), which are complex and which we cover extensively in prior posts.

In addition to introducing the complexities of GPCIs, the DWC also updated California-specific codes. Annually, the California Division of Workers’ Comp establishes a single new statewide reimbursement for the services covered by these ‘WC’ codes.

Since the beginning of 2019, York has ignored these required 2019 reimbursement changes to the GPCI and California-specific WC codes.

York. Behind Every Blown Payment

The following two examples are representative of the many payments by York we found during our data analysis. In each example, York underpaid the provider by failing to apply the GPCI locality factor. Adding insult to injury is York’s incorrect reduction of WC002 payments, which the DWC set at a California-specific code reimbursement of $12.65 for dates of service in 2019, no matter where it’s performed. There is absolutely NO excuse for incorrectly paying the WC002 in 2019. 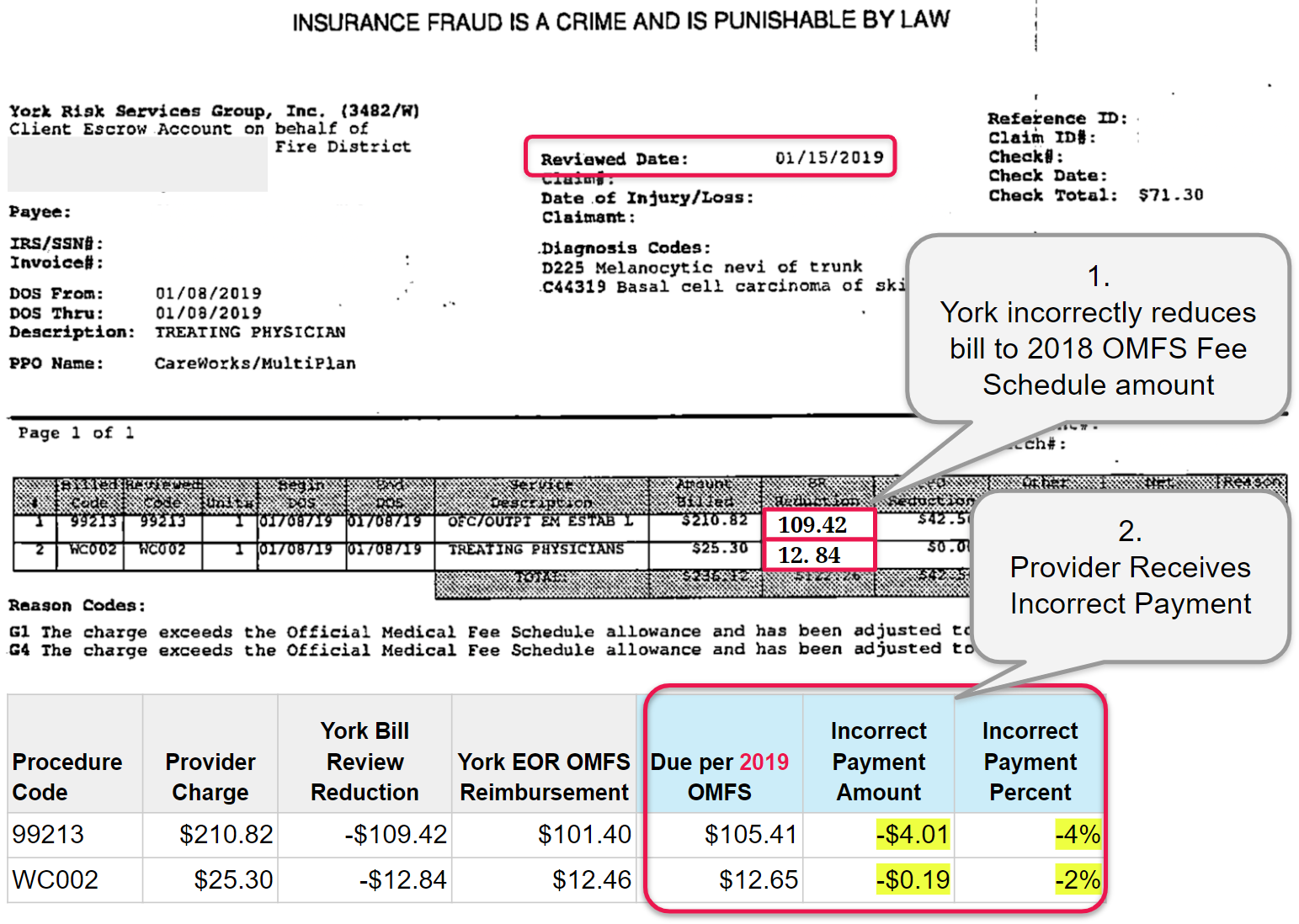 What’s also noteworthy is that this is a bill for services rendered to an employee of a California fire district, one of those we should be thanking for their extraordinary efforts to keep us safe.

No injured worker should ever receive substandard care, but given York and other carriers’ patterns of underpayment, injured workers are fortunate any provider is willing to endure this payment friction in exchange for medical services. 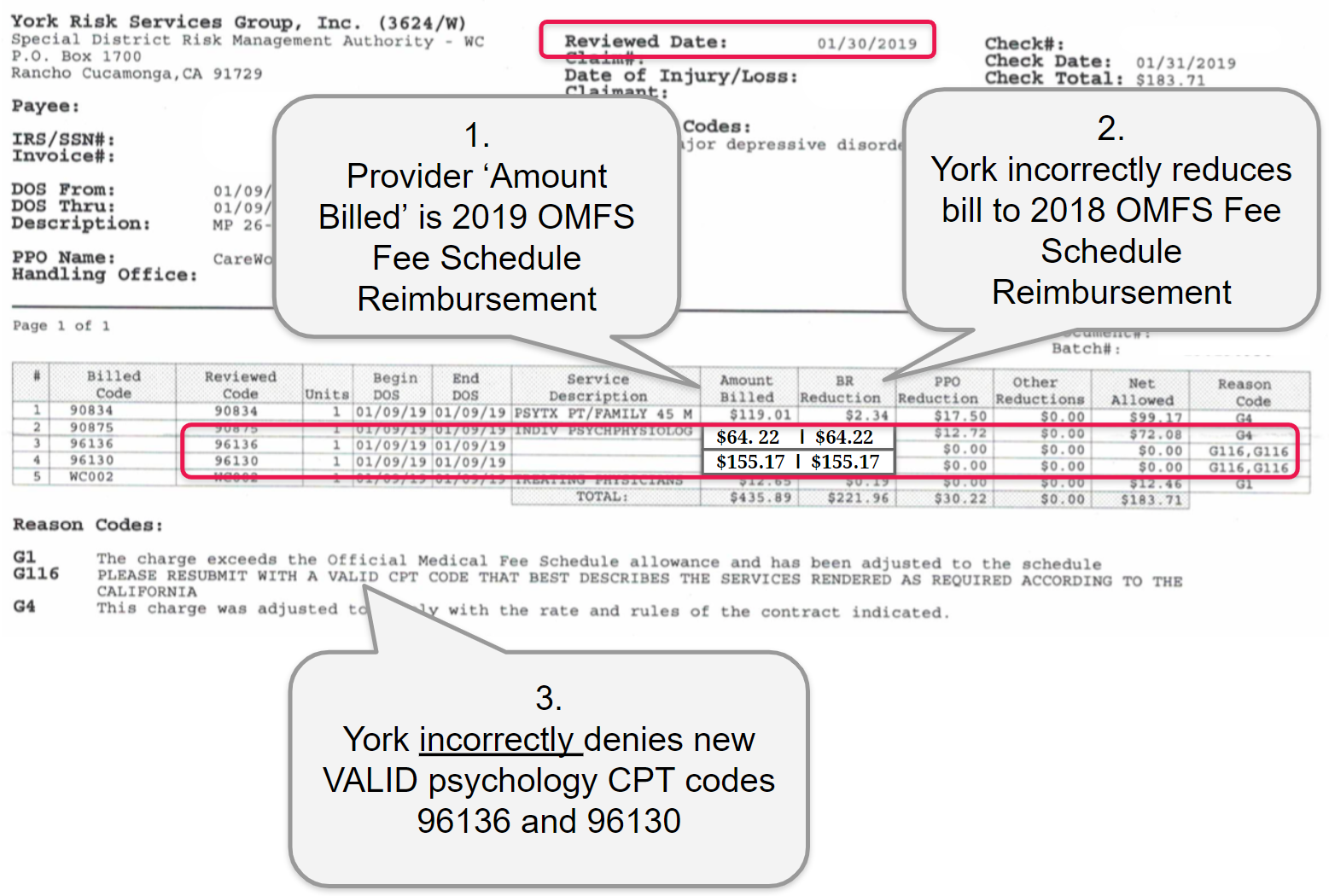 As we illustrated in our coverage of Sedgwick’s misapplication of the 2018 OMFS rates to 2019 dates of service (DOS), providers should not be burdened with correcting a claims administrator’s epidemic of incorrect reimbursements. DaisyBillers have already submitted 4,137 bills to York for 2019 DOS, and unfortunately, the bills with a York “Reviewed Date” prior to 1/30/2019 indicate a systemic, month-long error. York needs to step in and offer a solution to providers.

We feel your frustration here at DaisyBill. That’s why we painstakingly update our software with the latest fee schedule updates, no matter how labyrinthine. Coupled with our efficient electronic billing platform, DaisyBill puts the power of knowledge at your fingertips. Most importantly, DaisyBill clients can easily submit fully compliant appeals in seconds with our intuitive software. We make securing the correct reimbursement simple and keep administrators on their toes.