SCIF Stiffs Doc by Paying AFTER Request for IBR

daisyNews SCIF Stiffs Doc by Paying AFTER Request for IBR

SCIF Stiffs Doc by Paying AFTER Request for IBR

In a classically underhanded move, California’s State Compensation Insurance Fund (SCIF) twice denied payment for the authorized treatment of an injured worker, but then suddenly, miraculously admitted its “error” and agreed to pay up — after the doctor paid $180 to request Independent Bill Review (IBR).

SCIF, in a letter to California’s designated IBR organization, Maximus, proclaimed there is no longer any dispute, since SCIF paid the amount billed. Don’t be fooled:

SCIF also does not reimburse providers at the rates established by the California Official Medical Fee Schedule (OMFS). Instead, SCIF barely reimburses at Medicare rates. Data from over 44,000 e-bills sent by daisyBill provider clients demonstrates that SCIF, on average, reimburses the most common Evaluation and Management (E/M) codes at a rate equivalent to just 103% of Medicare rates — minus the loss factor of using practice resources to fight SCIF’s regular improper denials and non-compliance.

This is not SCIF’s first foray into cynical attempts to weasel out of IBR. On numerous occasions, the insurer has been a star player in the game we call “IBR Chicken,” which works as follows:

This particular case stands out, however, for the sheer audacity of SCIF’s false denial. SCIF’s Utilization Review Organization (URO), Genex, approved 6 sessions of the requested treatment.

SCIF paid for the first 3 sessions, and the last 2 — but falsely denied payment for the 4th as not authorized.

SCIF denied payment for the fourth session on the grounds that (sigh), the treatment was not authorized. This despite the fact that SCIF acknowledged the previous (and subsequent) sessions as authorized, and despite documented proof of authorization, which the provider sent with the original bill. 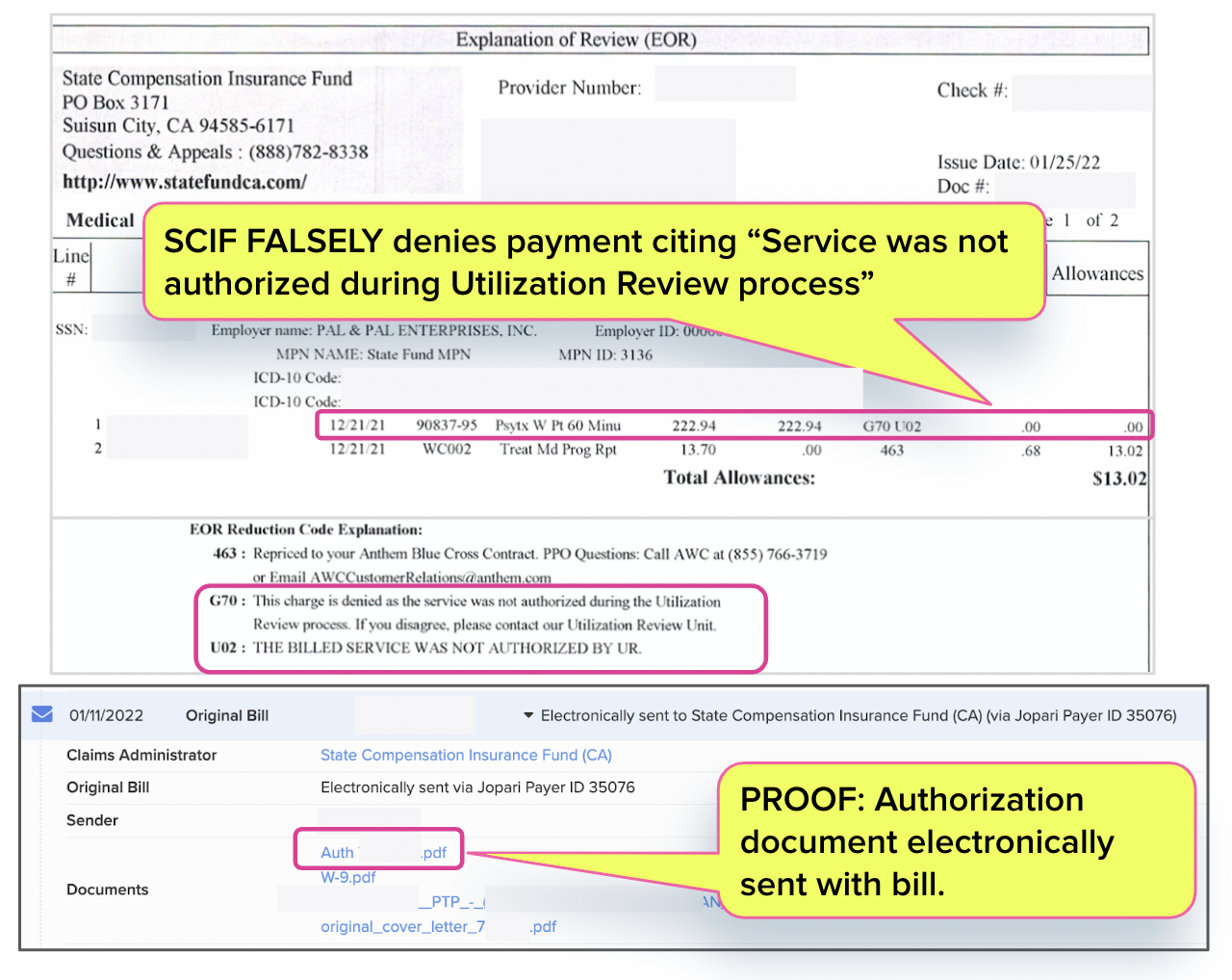 This left the doctor no choice but to pursue IBR, which required paying a $180 filing fee, completing a detailed standard IBR form, and assembling a 53-page packet for submission to Maximus. 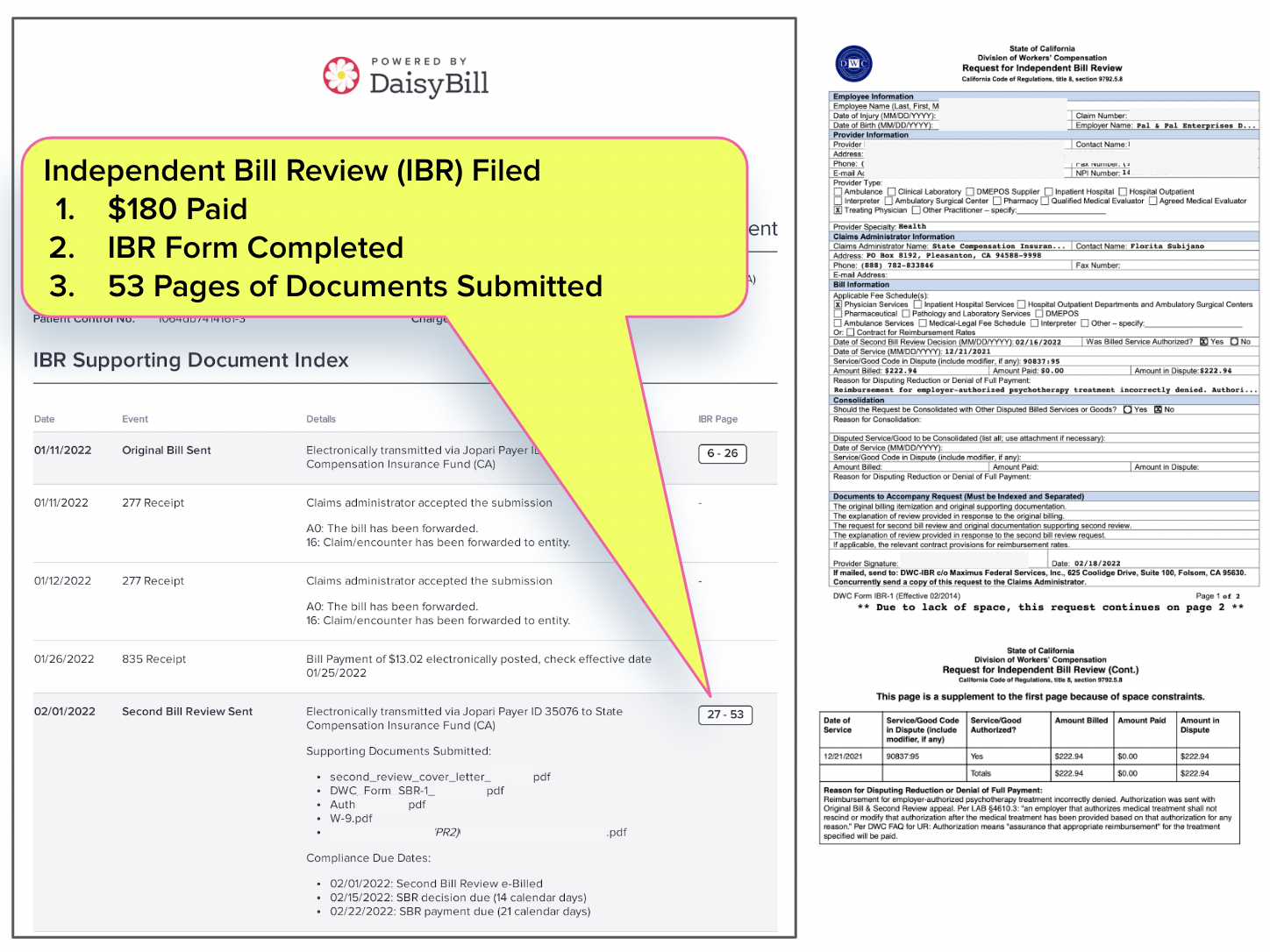 The time, money, and resources the doctor expended to reach this point were not negligible. IBR represents the only way to ensure the doctor is fully compensated.

But SCIF had one of its signature (and predictable) changes of heart, responding to the IBR request by agreeing to pay — and telling Maximus that a “data entry error” was responsible for the mistake (or presumably both mistakes, when you count the denied Second Review appeal). SCIF told Maximus that the doctor was reimbursed “per the fee schedule and their contractual agreement,” and therefore the dispute is over.

Of course, this conveniently fails to account for the hassle and expense required for the doctor to back SCIF into a corner. 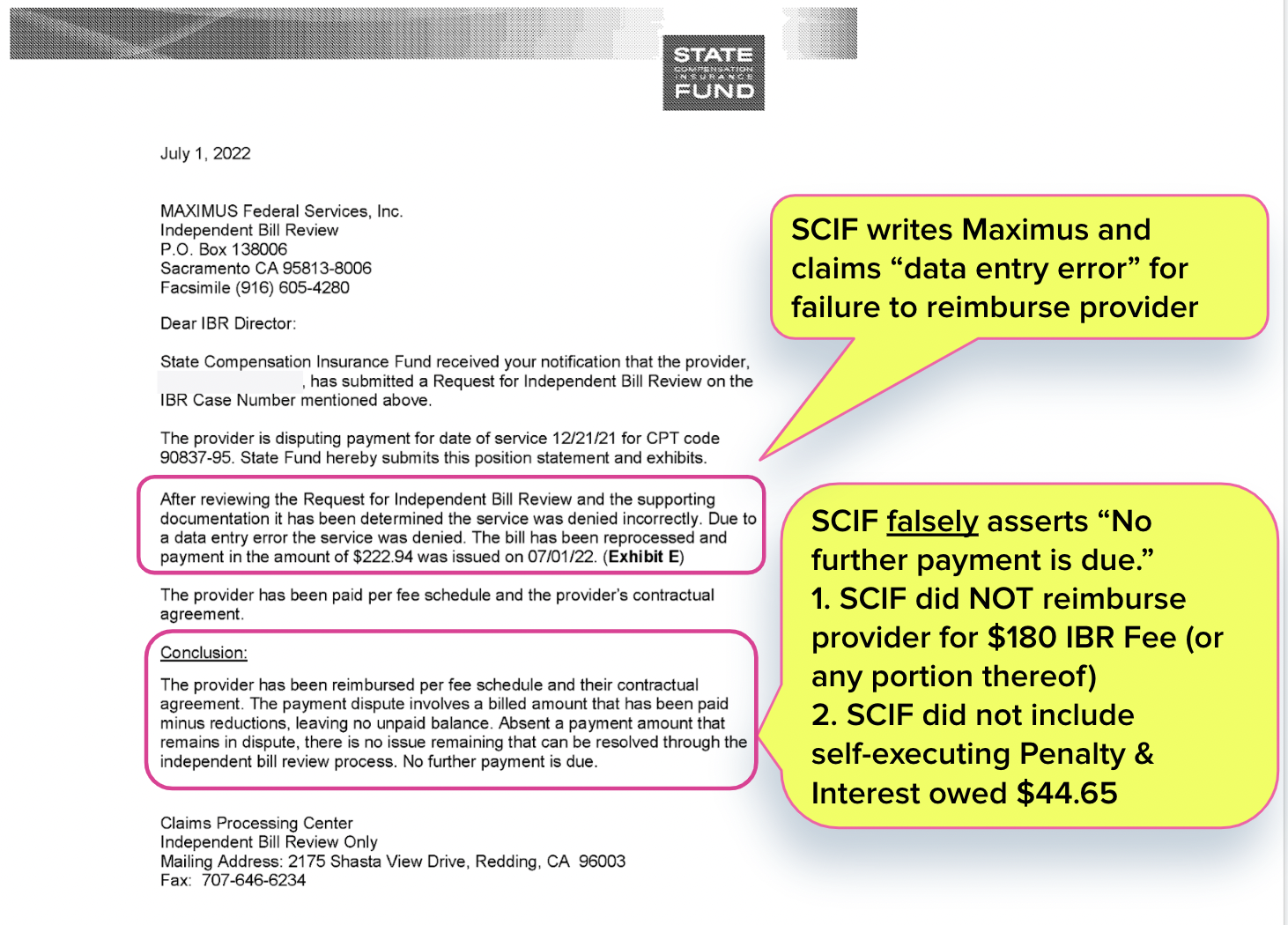 This blame game (citing data entry, rather than a slow-moving PPO) clearly demonstrates that it’s past time for providers to say no to treating SCIF-insured injured workers.

daisyBill has the technology and expertise to make workers’ comp work better. Reach out to see how we can help your practice obtain fast, correct reimbursement for treating injured workers.