Routinely, Explanations of Review (EORs) sent by payers reflect PPO reductions, yet these EORs fail to identify the name of the discount entity — as required by California law. Yet, when providers challenge these unsubstantiated PPO discounts, the providers discover that California offers no reasonable recourse to dispute the reduction taken by the unnamed Pilfering Provider Organization.

This lack of recourse is because the Division of Workers’ Compensation (DWC) holds an incredibly frustrating position: overturning unsubstantiated PPO discounts — even when the claims administrator failed to substantiate the reductions — is beyond the scope of Independent Bill Review (IBR).

The lack of IBR as a dispute mechanism amounts to a massive loophole by which payers simply reduce provider’s reimbursement without any justification. Essentially, claims administrators can improperly apply PPO discounts without fear of consequence. And they do!

PPO reductions, even when contractually justified, are one of the most significant drains on workers’ comp provider revenue. But often, the PPO reductions taken by the claims administrator are unsubstantiated on the EOR.

This despite the fact that California Labor Code Section 4609 specifically states that payers must:

(1) Provide an explanation of benefits or explanation of review that identifies the name of the network with which the payor has an agreement that entitles them to pay a preferred rate for the services rendered. [emphasis added]

When the claims administrator fails to identify the entity behind the PPO reductions, the provider has no way to verify if the reductions are valid. Yet over and over, we see EORs that either fail to identify any network whatsoever, or identify an inapplicable network contract (as in the recent Triton/ACPN and Prime Health Services bombshells).

Most of the time, when the provider submits a Second Review appeal, the claims administrator predictably refuses to reimburse correctly. This leaves the provider no option but to request IBR. However, the DWC has declared disputes over unsubstantiated PPO reductions ineligible for IBR.

Below is a typical example of an IBR ineligibility letter from the DWC to a provider, in response to the provider’s request for IBR to dispute an unnamed PPO reduction by Liberty Mutual. 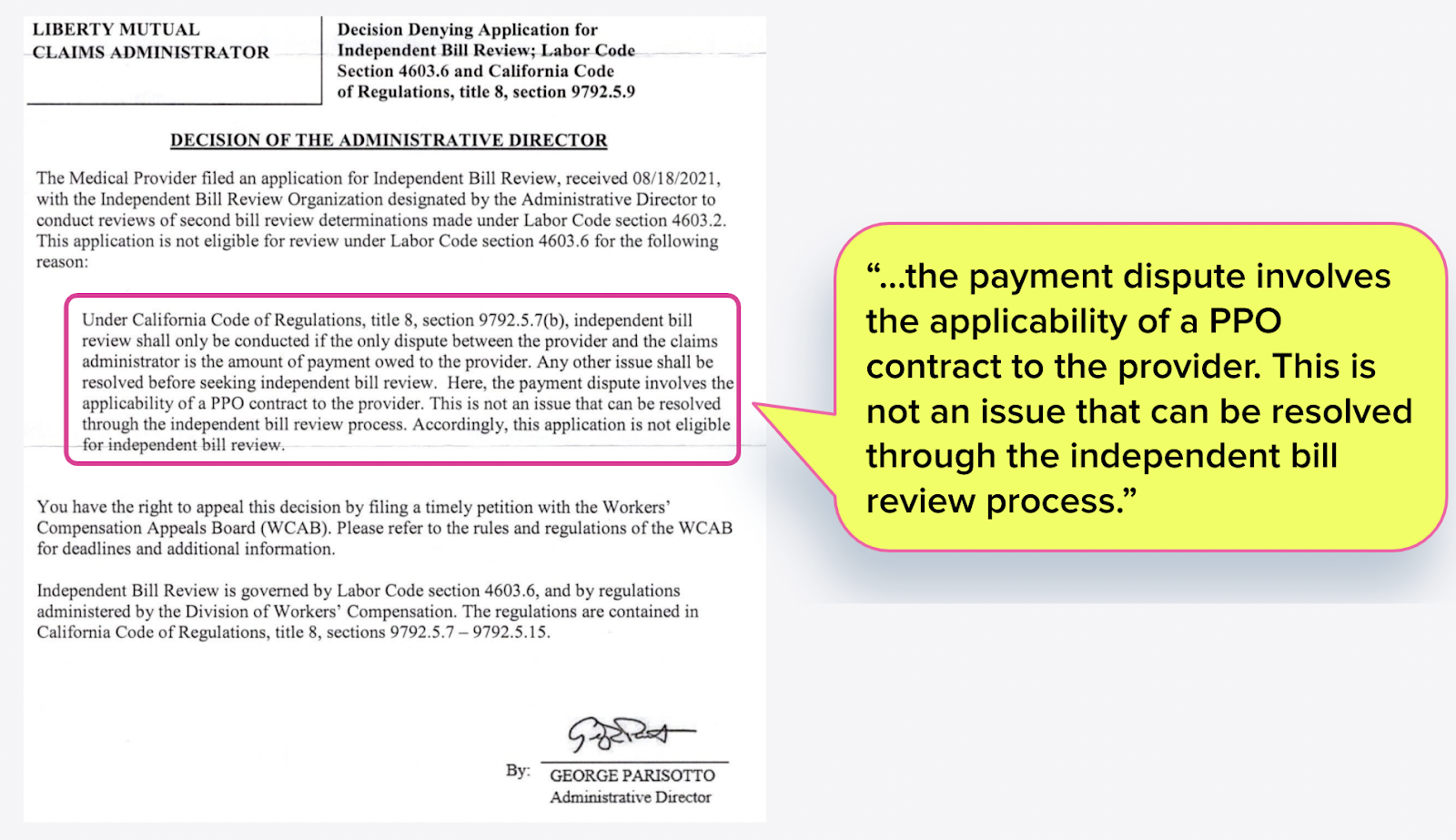 That’s right: the DWC refuses to allow IBR for straightforward disputes over the amount owed for rendering authorized services, with no questions of liability or any other “threshold” issue, simply because…well, because doing otherwise would deprive the payer of its overwhelming advantage in payment disputes.

In other words, providers have no reasonable recourse to obtain correct reimbursement — unless providers are willing to engage in the even more onerous, lengthy, and prohibitively difficult process of filing a lien with the Workers’ Compensation Appeals Board (WCAB) every time a claims administrator takes an unjustified PPO reduction.

The DWC’s refusal to address improper PPO reductions via IBR is exactly the kind of non-enforcement that encourages IBR Chicken by claims administrators — and creates hopelessness among providers. Perhaps that’s why so many doctors are leaving workers’ comp behind.