This leaves providers with inaccurate information on which to base their own accounting.

The root of the problem is the York bill review service, CareWorks Managed Care Services. We can only wonder if this problem is as headache-inducing for the employers that utilize York as it is for providers? Without knowing whether this recurring error is reflected in York’s reporting to their own clients, the following employers should consider checking the accounting sent by York, because EORs for these employers all contain the error described below: Enterprise Rent-A-Car, Ulta Beauty,  Restaurant Group (El Pollo Loco, Wendy's, Denny's, Krispy Kreme).

Accounts Receivable, If Not Believable

The York/CareWorks problem echoes a similar issue we noticed with several other insurance companies, including Zurich, Guard Insurance, and Keenan — courtesy of their common bill review service, Mitchell. As of this writing, Mitchell’s issue remains unresolved.

The resulting reimbursement total is too high, by exactly the amount of the original, incorrect payment that initially prompted the second review appeal.

For example, in the screenshot of the electronic EOR from our Billing Software below, York incorrectly remitted $11.64, failing entirely to pay for the billed CPT Code 99213.

The provider appropriately sent a second review appeal requesting correct reimbursement. Upon the second review, York agreed to pay $96.98 for CPT 99213. The final “EOR Allowance” should reflect only this additional payment of $96.98. Instead, it reports a payment of $108.62.

The non-electronic version of the final EOR offers no additional clarity. The first page makes no distinction between the original amount York remitted and the additional amount remitted after the second review appeal. 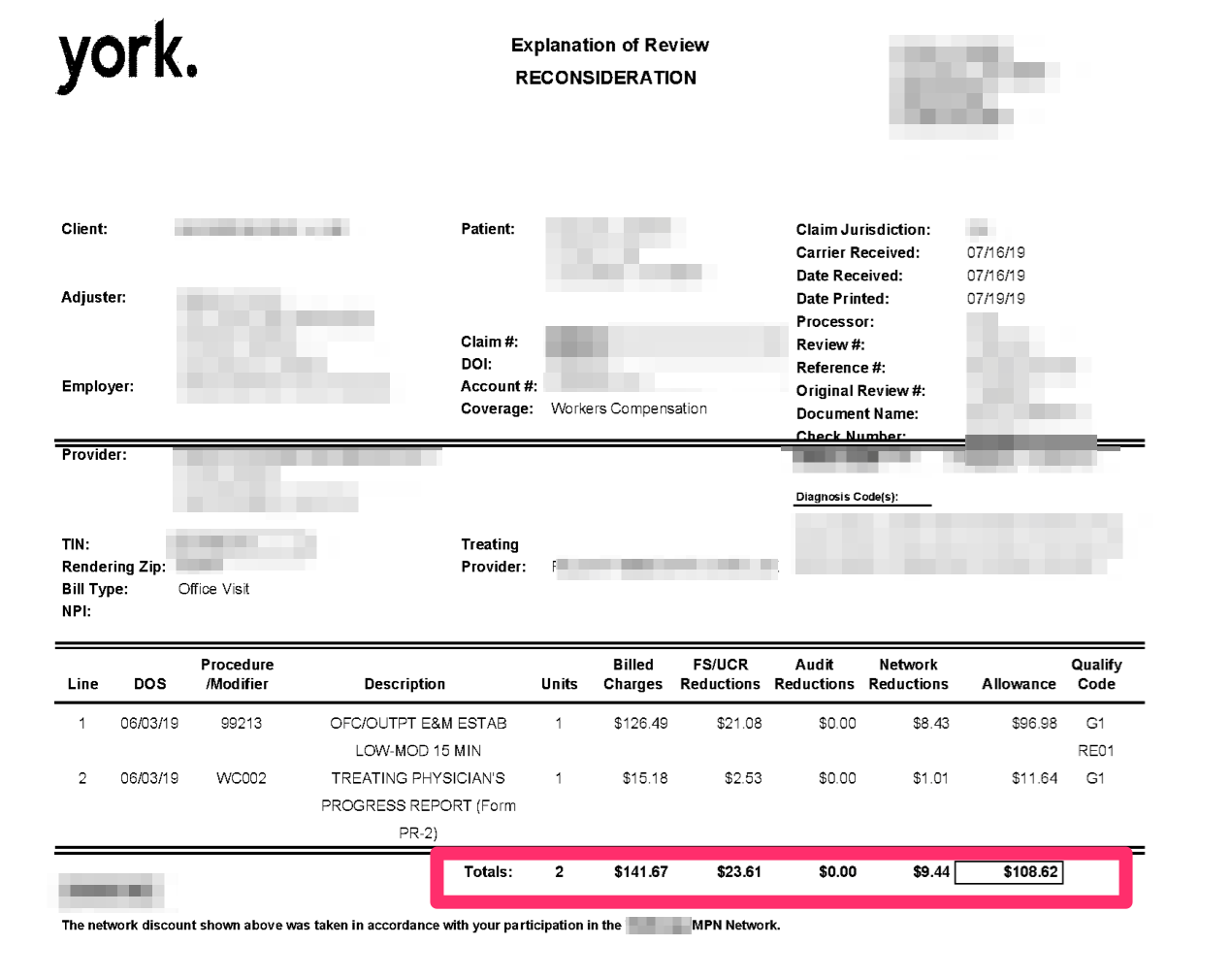 It’s only at the bottom of the following page, under “Bill Reconsideration Summary,” where the math is adequately explained and the actual payment allowed for the second review is listed. 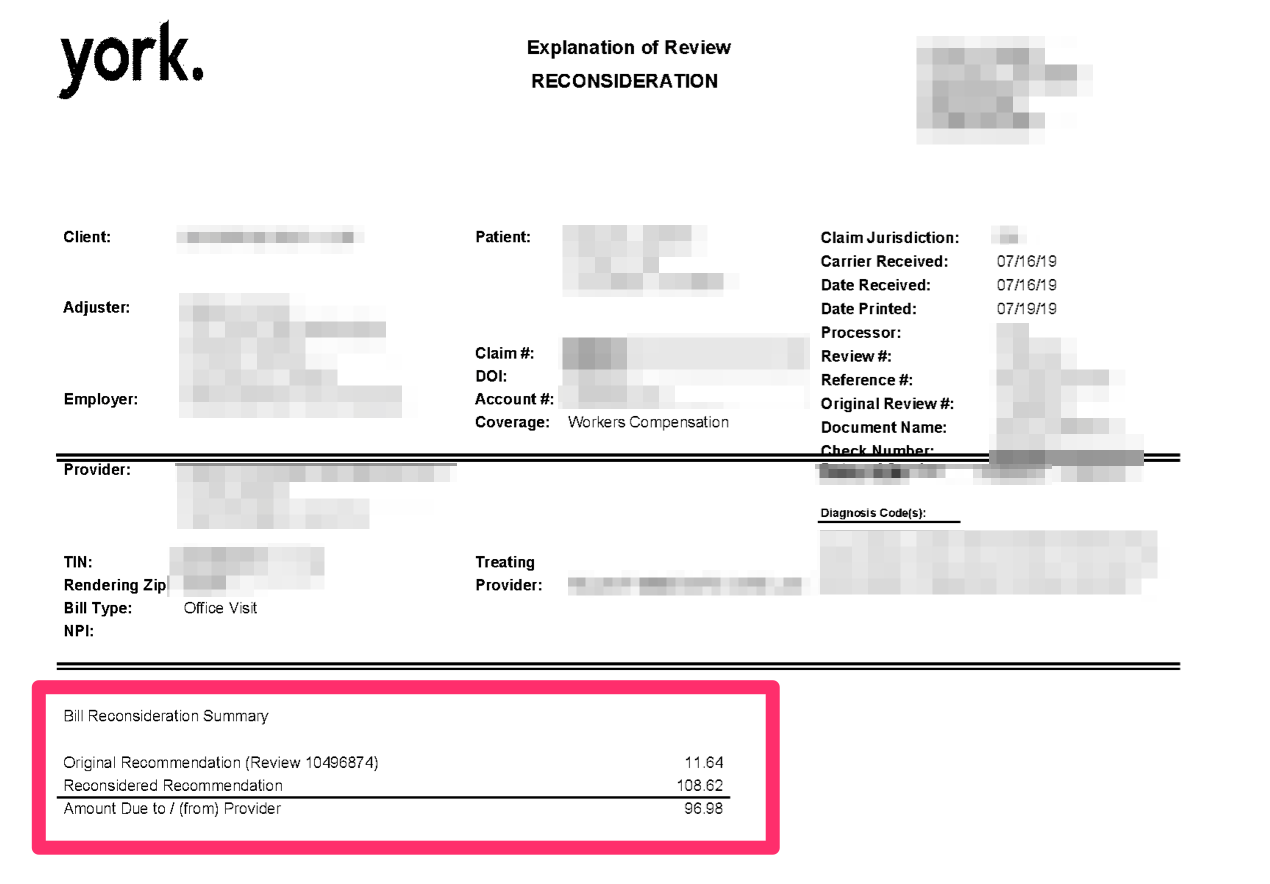 While the electronic EOR is completely inaccurate, the paper “Bill Reconsideration Summary” helps, but it’s hardly adequate, as clear and accurate reporting goes.

In early June, DaisyBill clients noticed these errors and reported them to DaisyBill. DaisyBill reached out to York’s electronic billing clearinghouse, WorkComp EDI. Soon after, York supposedly deployed a fix that eliminated the error. “Supposedly” proved to be the operative concept.

We continued to monitor the York second review EORs, and the error persisted. In mid-July, we again reported to the clearinghouse that providers continue to receive inaccurate EORs, providing several examples. To date, like Mitchell, York has yet to resolved the issue.

As in the Mitchell case, the York/CareWorks issue stands as another example of what happens when claims administrators and their agents simply can’t bring themselves to care about the inconvenience, stress, and expense their errors foist on providers. With providers doing their part to adopt more efficient, sustainable billing, the least claims administrators can do is to ensure their own systems function properly.

With everything that can go wrong in workers’ comp billing and payment, providers need billing agents who know their stuff. DaisyBill makes billing easier, faster, and less complicated for providers. And when necessary, our Compliance Team gets involved on behalf of our clients. Schedule a free demonstration of our Billing Software below!

Recently, a provider made the unfortunate mistake of signing a Prime Health Services (PHS) Preferred Provider Agreement contract, commonly known as a PPO agreement. While not...

The California law regarding electronic explanations of review (EORs) is crystal clear and completely unambiguous -- at least to the vast majority of the workers’ comp commun...