Zurich seems committed to a policy of improperly denying reimbursement for telehealth services, during a pandemic in which remote treatment is crucial to maintaining care for workers.

The question is: why?

As of this writing, Zurich has improperly denied reimbursement for telehealth services to injured employees of the following companies:

By incorrectly denying reimbursement to providers, Zurich does a disservice to the above companies and their employees. Worse, Zurich does so by exploiting a technicality peculiar to telehealth billing, in contravention of DWC guidelines, when remote services are more important than ever.

“The procedure code is inconsistent with the modifier used or a required modifier is missing.”

The “required modifier” in question is modifier 95, which providers use to bill for medical services furnished via telehealth. In April of 2020, the DWC adjusted its telehealth regulations to include the use of modifier 95 when providers bill for telehealth services.

“If modifier is incorrect, billed OMFS code should still be considered for payment either without use of the modifier or with adjustment by the reviewer to the correct modifier, when the service is otherwise payable.”

As shown below, the Billing and Payment Guide is unambiguous: 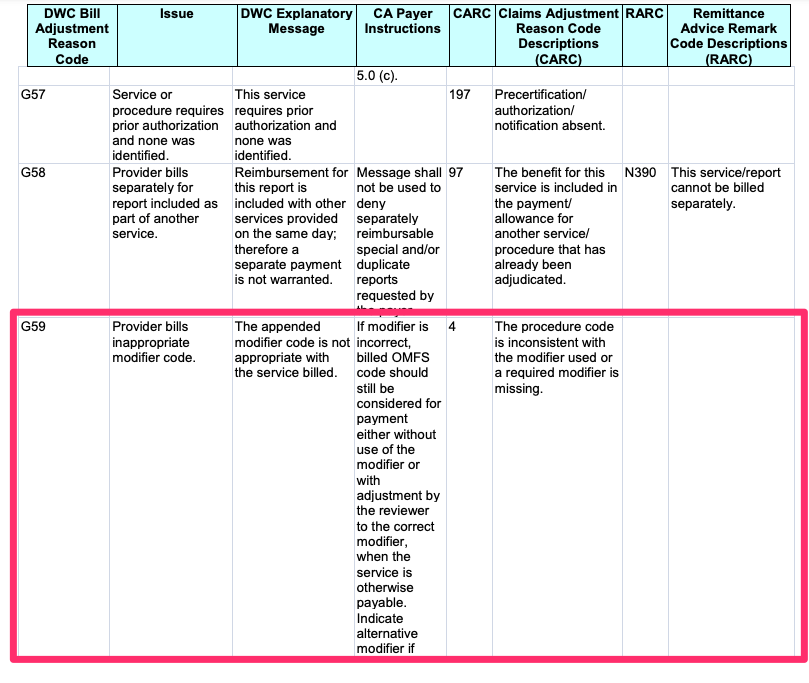 In other words, as long as the billing code reflects the correct authorized service, claims administrators have no reason to deny reimbursement for lack of the modifier. Unless, of course, the reason is to strip providers of due reimbursement.

How to Fight Improper Modifier-Based Denials

If your office faces similar denials from Zurich or other claims administrators, submit a Second Review appeal within 90 days, with the following language:

“Provider failed to report the correct modifier. This bill should be reprocessed with modifier 95 as follows [billing code]. Per CA Payer Instructions ‘If modifier is incorrect, billed OMFS code should still be considered for payment either without use of the modifier or with adjustment by the reviewer to the correct modifier, when the service is otherwise payable. Indicate alternative modifier if assigned.’”

If the claims administrator stands by the incorrect denial — as Zurich has — be prepared to file a request for Independent Bill Review, and possibly an audit complaint.

Unfortunately, providers must be ready to battle blatantly invalid denials like Zurich’s. At this point, Zurich cannot plausibly claim ignorance of the relevant DWC guidelines, as DaisyBill clients and our own agents consistently appeal these telehealth denials with the language above.

And yet, the denials continue. So must the fight to keep payers like Zurich from making it even harder to treat injured workers than COVID already has.

We’ll fight the good fight for you. Contact us, and learn how DaisyBill makes authorization, billing, payment, and appeals quick & easy for busy providers.

SEE HOW WE CAN HELP

In California, when submitting a bill for treating an injured worker, it’s imperative to include the correct documentation to support the treatment. If the provider fails to ...

With COVID-19 hardly in the rearview mirror just yet, California workers’ comp providers can still utilize telehealth as a safer alternative to in-person treatment. But of co...