SCIF’s original adjustment reasoning failed to hold up after a Second Review appeal. Subsequently, SCIF remitted a different (but still incorrect) amount with new (but still erroneous) reasoning based on a misapplication of Geographic Practice Cost Indices (GPCI).

This forced the provider to request IBR for what was essentially a new dispute, as Second Review had already occurred.

This minor complication, however, is no excuse for the DWC to refuse IBR.

Beyond the injustice of a single incorrect reimbursement, the DWC’s decision sends a troubling message to payers: don’t be afraid to incorrectly deny or adjust reimbursements, no matter how baseless the reasoning is — IBR inconsistency just might reward you.

Initially, SCIF incorrectly denied the provider’s bill by claiming the services rendered were not authorized. This is especially absurd considering the provider included documentation of authorization with the original bill.

The provider submitted a Second Review appeal, citing the authorization documentation included with the original bill. In a shining moment of basic competence, SCIF acknowledged the authorization, and agreed to pay.

Sadly, the shining moment was a brief one.

In processing the bill, SCIF incorrectly applied the wrong GPCI, which adjusts payment based on the place of service.

SCIF calculated reimbursement based on the provider’s billing address, rather than the practice location, as the amount allowed and the adjustment reasoning on SCIF’s final Explanation of Review (EOR) shows: 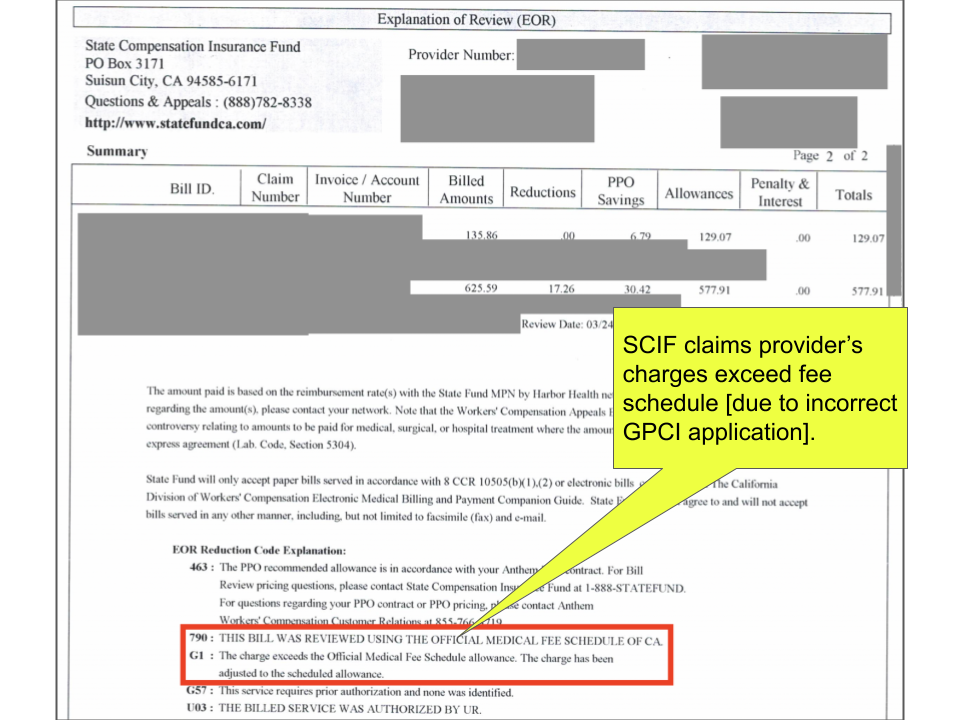 While it’s nice (we suppose) to see SCIF back away from the false authorization argument, the incorrect GPCI adjustment created a new problem. Because the bill went through Second Review, SCIF was within their rights to refuse to reconsider the second, incorrect payment amount.

That left IBR the only remaining option. Unfortunately, the DWC would drop the ball with a resounding thud.

From a brief search of our IBR Decision Library, we found multiple examples of disputes exactly like the one the provider submitted for IBR, as described in this post.

In each case, the DWC and its IBR proxy, Maximus, sided with the provider and overturned the payer’s incorrect GPCI-based adjustment. And in each case, the payer had misapplied GPCI adjustments in the exact same way: by referring to the wrong section of the CMS 1500 original billing form.

Most of the time, the DWC/Maximus recognize this error, and force the payer to correct it. For example, below is a Maximus letter of Final Determination sent to Athens: 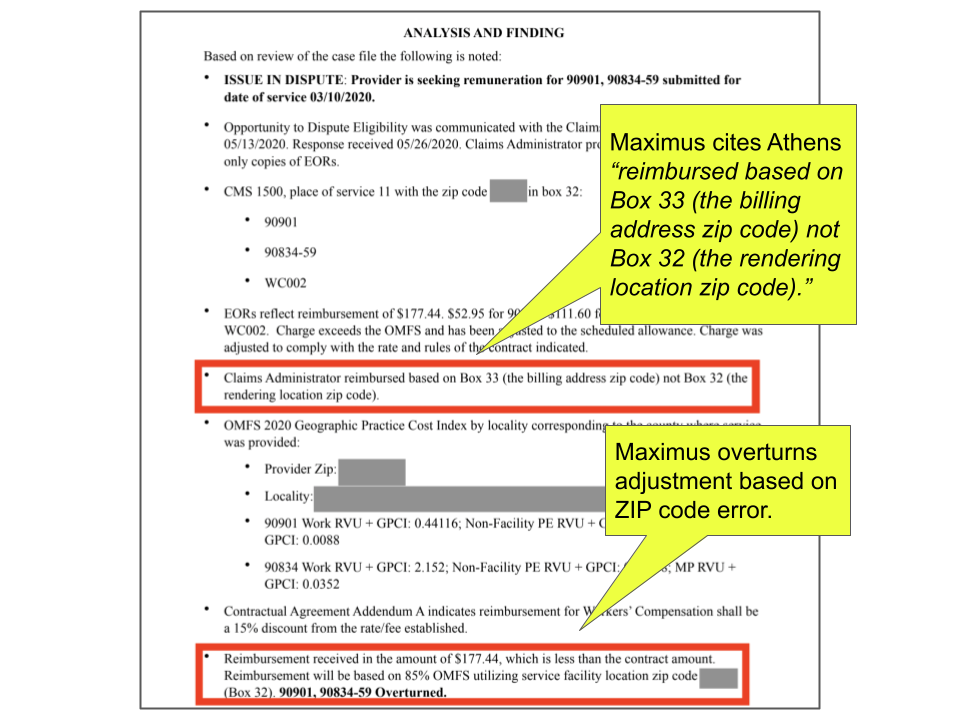 There are multiple IBR decisions exactly like the one above, for payers including:

Note: above we link to the DWC IBR case files, in which the names of the claims administrators are redacted.

The DWC/Maximus’ record on this issue is laudable — which makes the state’s failure in this dispute that much more frustrating.

For some incomprehensible reason, the DWC sent the below letter of ineligibility to the provider, claiming that the “alleged” incorrect GPCI application cannot be resolved through IBR: 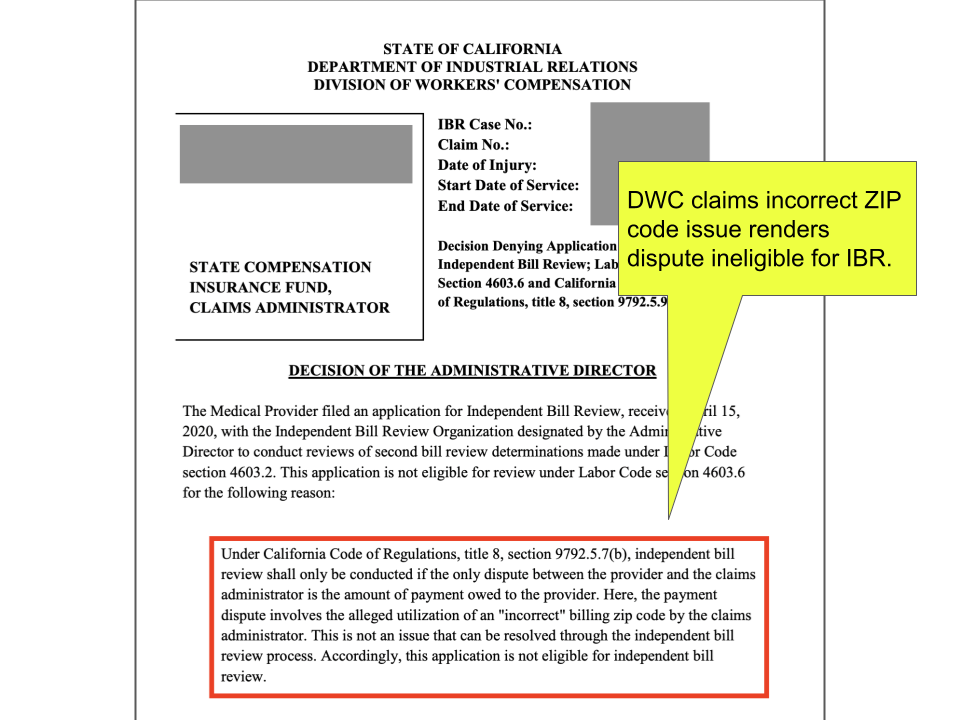 How could the DWC possibly justify this decision?

How does an adjustment based on an incorrect billing zip code not qualify as a dispute over “the amount of payment owed to the provider?” There is no authorization or other “threshold” issue in play (the authorization issue was resolved via Second Review appeal).

As the DWC and Maximus’ previous rulings amply demonstrate, this is a clear-cut, open-and-shut case of a location-based billing error — precisely the kind of dispute IBR exists to resolve.

When the DWC/Maximus errs in this way, it erodes confidence in the IBR process. Rather than a reliable, objective way to resolve billing disputes, IBR takes on the look of a payer-friendly crapshoot.

Ultimately, it emboldens less scrupulous payers to adopt a policy of “just deny and see what happens.” When consequences are inconsistent, we can expect compliance to be inconsistent, too.

DaisyBill makes authorization, payment, and appeals faster, easier, better. Contact us to learn how DaisyBill can save your practice thousands in revenue for workers’ comp services.