Fortunately, several Independent Bill Review (IBR) cases demonstrate that this cynical denial tactic doesn’t work when push comes to shove — which is why we encourage providers, when pushed, to shove back. Hard.

In multiple cases, insurers used denial of liability for the injury to deny payment for the Medical-Legal evaluation. The pattern goes like this:

To the state’s credit, this absurd liability argument rarely flies.

In dispute after dispute, the Division of Workers’ Compensation (DWC) and its IBR proxy, Maximus, determined that even when the payer denied the claim as non-compensable, the payer is still responsible to reimburse the Qualified Medical Evaluator (QME) or Agreed Medical Evaluator (AME) for conducting the Medical-Legal evaluation.

Among the many examples available in our IBR Decision Library is an “Overturn” decision against Liberty Mutual.

In the Final Determination letter from Maximus reversing Liberty Mutual’s denial of payment (pictured below), Maximus demonstrated unambiguously that liability for the injury has no bearing on payment for the Medical-Legal evaluation: 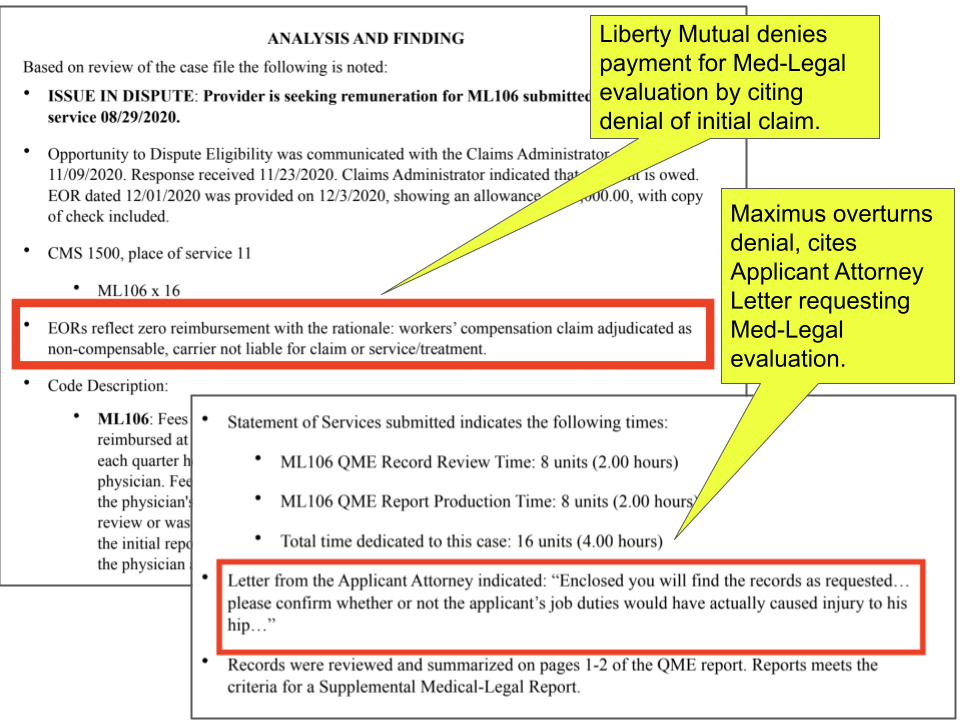 As the Maximus Analysis and Finding section shows, Liberty Mutual’s rationale for denying payment was that the initial claim was denied. But in ruling against Liberty Mutual, Maximus ignores this argument, and cites the request from the applicant (i.e. the workers’) attorney to determine the work-relatedness of the injury.

Notably, Liberty Mutual actually paid this provider in full prior to Maximus issuing their Final Determination.

From a brief search of our IBR Decision Library, we found over a dozen similar “Overturn” decisions by payers attempting the liability play, including:

...in addition to several others for Liberty Mutual. (Note: above we link to the DWC IBR case files, in which the names of the claims administrators are redacted.)

In each case, the payer denied liability for the claim. In each case, Maximus noted the valid request for a Medical-Legal evaluation from a party; either the payer’s or the worker’s attorney. As California Labor Code Section 4062.2 (b) states:

And in each case, Maximus overturned the insurer’s denial of payment, awarding the provider the full amount due, plus restitution of the $180 IBR filing fee.

Liability: Not a “Threshold” Issue in Med-Legal Disputes

California created the IBR process to reduce the amount of liens providers must file in order to obtain reimbursement. By establishing IBR, the state lifted the burden of settling disputes over payment amounts from the Workers’ Compensation Appeals Board (WCAB).  Thereafter, the WCAB could focus on “threshold” issues like liability and authorization disputes.

The obvious exception to this is services rendered in order to determine liability, i.e. Medical-Legal services.

In payment disputes for medical services under the Official Medical Fee Schedule (OMFS), liability and authorization are indeed “threshold” issues that preclude IBR. But Medical-Legal services are inherently different, as so many IBR decisions confirm.

Submit Second Review appeals within 90 days of receiving an Explanation of Review (EOR) that improperly denies your bill. If the claims administrator refuses to see reason (and they very well may refuse), request IBR.

The facts, and IBR precedent, are on your side.

DaisyBill makes authorization, payment, and appeals faster, easier, better. Contact us to learn how DaisyBill can save your practice thousands in revenue for workers’ comp services.

We asked our readers to submit their most vital California workers’ comp questions for a live Q&amp;A webinar. They did not disappoint!If you missed it, below is a brief r...