In 2016, California State Bill 1160 was signed into law, instituting new timely filing requirements for workers’ comp medical treatment bills. Since 2017, Labor Code Section 4603.2 allows claims administrators to deny payment if a bill is not submitted within a year from the date of service.

However, §4603.2 also directs the Division of Workers’ Compensation (DWC) to adopt rules defining what constitutes good cause for making an exception to the 12-month submission window. Unfortunately for providers, the DWC has failed to adopt any such rules outlining exceptions to timely filing.

Without rules defining exceptions, claims administrators are implementing automatic denials for all bills where the date of service exceeds 365 days at the time of submission. While there are reasonable exceptions to the 12-month deadline, claims administrators set up payment systems to automatically reject or deny every bill deemed untimely submitted, even those that qualify for reimbursement.

This is an underhanded move, typical of a rigged system designed to deny payment to providers who treat injured workers.

Based on this, some claims administrators’ systems are set up to automatically reject bills deemed “untimely,” based solely on the date of service and the date of submission. If more than 12 months passed between the former and the latter, the system rejects the bill, period.

But as the Labor Code also directs the administrative director to adopt rules to defining possible exceptions to the timely filing requirement:

There are perfectly valid reasons for a provider to submit a bill after the 12-month deadline, most obviously when a liability dispute is involved — an example directly cited in the Labor Code itself. Unfortunately for providers, some claims administrators seem only to have read the final sentence of §4603.2(b)(1)(B):

...The request for payment is barred unless timely submitted.

For an even more egregious example of why automatic timely filing rejections are so problematic, look no further than Guard Insurance.

As the screenshot from DaisyBill shows, Guard rejected the second review appeal, on the grounds that the appeal was submitted after the 12-month timely filing deadline. 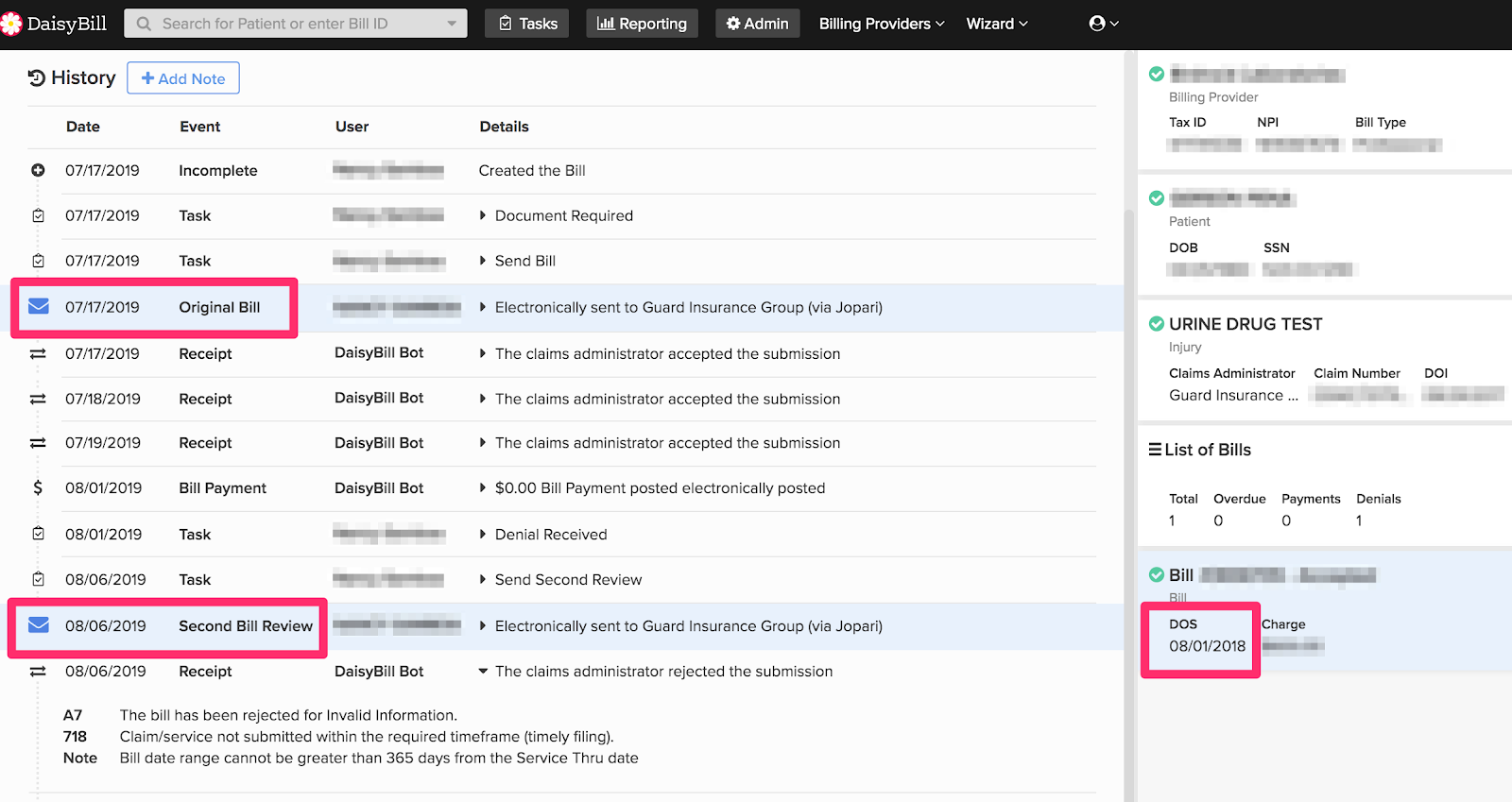 Despite this, Guard instructed their clearinghouse to automatically reject all bill submissions — including valid second review appeals — submitted after 12 months. Guard is not alone in this practice. Whether out of incompetence, or the sheer chutzpah it takes to knowingly cause the rejection of valid bills, claims administrators are taking full advantage of the lack of exception rules to the timely filing requirement.

We urge providers to take the necessary steps when claims administrators pull this nonsense: file a lien. While most billing disputes that go beyond second review qualify for Independent Bill Review (IBR), rejecting compliant bills on false pretenses is a breach of duty which requires this less common recourse.

DaisyBill is currently working with claims administrators’ clearinghouses to address this practice. In the meanwhile, providers, take the steps necessary to protect your revenue.

DaisyBill’s work comp Billing Software features everything providers need to bill completely and compliantly, plus features that make appealing for Second Review easy and fast. In the event of continued dispute, our IBR Decision Library helps providers bolster their case with solid precedent.

Schedule a free demonstration, and see what DaisyBill can do for your office.