For anyone concerned by the lack of providers willing to treat injured workers, the following dark tale perfectly illustrates the reason so many providers flee workers’ comp.

The details of this depressing anecdote are complex, but perfectly demonstrate the grim battles providers must fight every day — simply to treat injured workers with a reasonable expectation of correct compensation.

And that was only the beginning...

The provider in question submitted a bill for Current Procedural Terminology (CPT) Code 90834 for Psychotherapy Services and Procedures, at Official Medical Fee Schedule (OMFS) rate of $127.87 for the service locality.

In the EOR, Applied Underwriters re-coded the bill by replacing code 90834 with CPT Code 90876 for Other Psychiatric Services or Procedures, with an OMFS reimbursement rate of $158.95 for the service locality.

But at second glance, it gets even more absurd.

Applied still remitted $127.87, the amount required for CPT 90834. In essence, Applied chose to change the billing code without changing the reimbursement, as the (EOR) below shows: 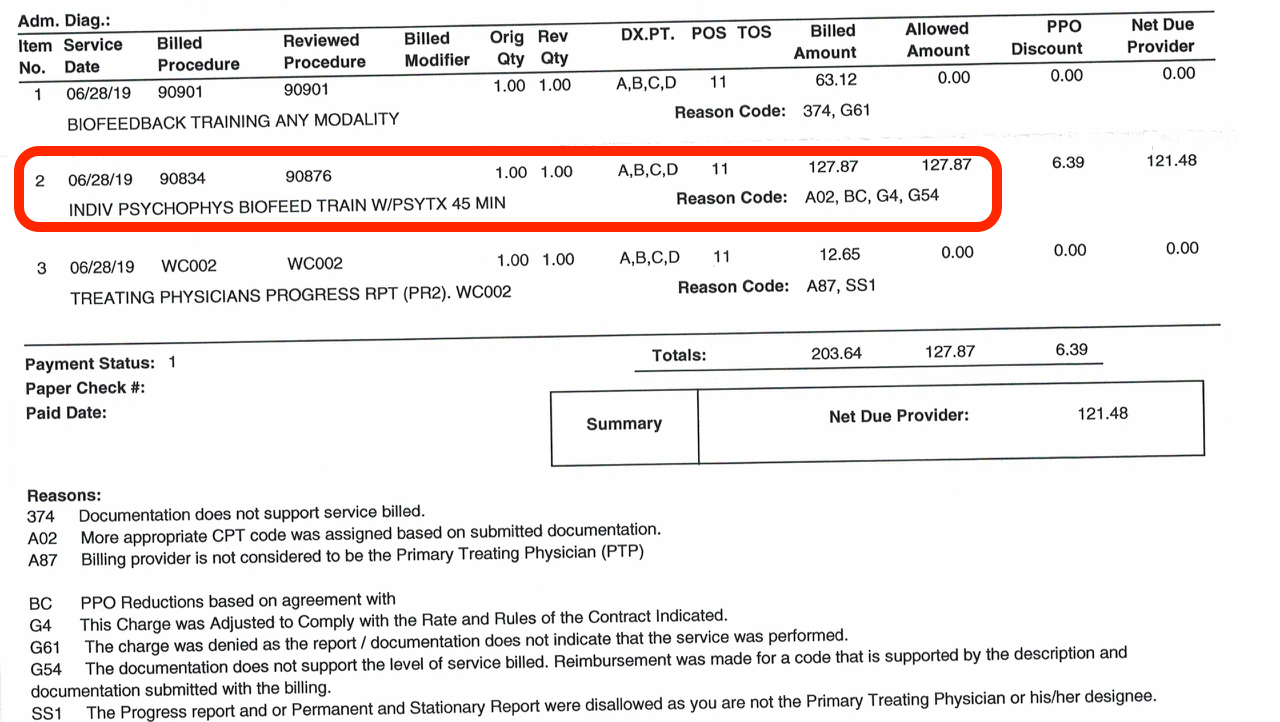 Not only did Applied Underwriters replace CPT 90834 with CPT 90876; they also denied payment for another code on the same bill, CPT 90901, with the denial reason of “Documentation does not support service billed.” 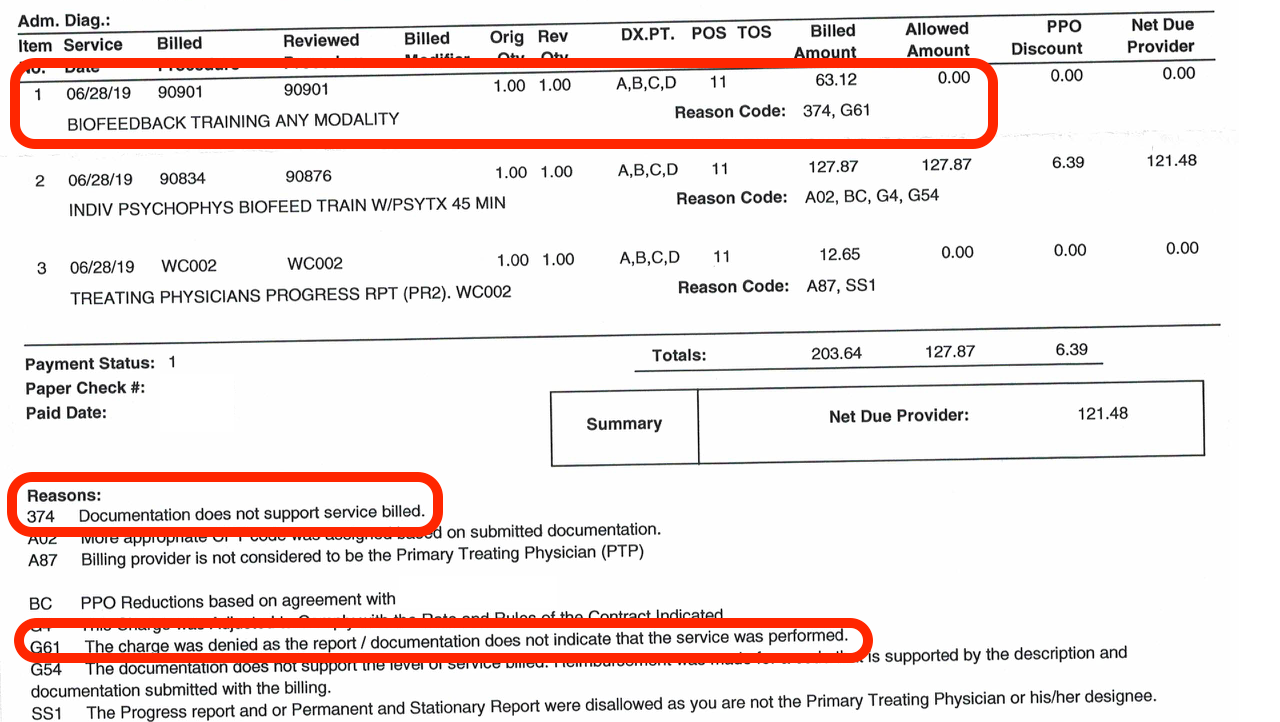 Appropriately, the provider submitted a Second Review to appeal the denied payment for CPT 90901. In responding to the Second Review appeal, Applied Risk changed their denial reason, asserting a new argument against CPT 90901: that the services reflected in 90901 were (conveniently) included in CPT 90876, the code Applied Underwriters had so inexplicably applied to the original bill.

Given that a provider is only allowed to submit a single Second Review appeal, a claims administrator cannot, at this stage, add a new and different denial reason. It’s like tackling an opposing football player when he’s already in the endzone; new and different adjudication on appeal is simply not allowed.

In short, it’s dizzying to even summarize Applied Underwriters’ string of ham-fisted attempts to not correctly pay this provider:

At this stage, the provider had no choice but to request Independent Bill Review (IBR).

This story has a happy ending; the provider ultimately prevailed in IBR (as most providers do), and was awarded an additional $59.96 plus the $195 filing fee providers pay upon requesting IBR. However, the effort and resources required to simply collect proper reimbursement as allowed by the fee schedule is the mark of an unsustainable system.

No wonder providers avoid workers’ comp. Providers (and employers) should not need to waste their time and resources because claims administrators are unable or unwilling to correctly pay a bill.

Unfortunately, even when IBR ends in the provider’s favor, the correct outcome is not guaranteed, as we’ve pointed out again and again. The next chapter in this saga will involve how long it takes Applied Underwriters to actually remit the full payment to the provider. We will keep you updated.

DaisyBill offers all the tools a provider needs to bill compliantly and effectively. Our Billing Software features fast, convenient RFA templates, plus internal tracking that alerts providers when a response from the claims administrator is due. Schedule a free demonstration, and make work comp easier for your office:

It happens every year: Reimbursement rates for workers’ compensation services in California change, and payers reimburse providers at the lesser, previous rates.It hap...

California’s Division of Workers’ Compensation (DWC) issued an update to the Physician and Non-Physician Practitioner portion of the Official Medical Fee Schedule (OMFS) for ...