Dept. of Labor Proves California Workers' Comp Is a Farce

Dept. of Labor Proves California Workers' Comp Is a Farce

Sometimes, it can feel like the California workers’ comp reimbursement process is a cruel joke perpetrated on the providers willing to treat injured workers. Other times, we see direct evidence of what a farce it is.

A new daisyBill client recently submitted three e-bills to the United States Department of Labor (DOL) for payment. These DOL e-bills were not paid in months, or weeks, or even days. The DOL returned electronic Explanations of Review (e-EORs) and payment at fee schedule rates in a matter of hours.

The federal government — not generally known for its efficiency — puts California to shame. Compare the DOL to California insurers and Third-Party Administrators (TPAs), which all too frequently:

California legislators and regulators should be ashamed of the payment abuse it allows insurers and TPAs to inflict on providers. California can (and should) do much, much better. If the DOL can efficiently pay doctors for treating its workers, why can’t California do the same — especially given its allegedly worker-friendly policies and much-vaunted technological innovativeness?

Instead, California legislators have allowed the state’s workers’ comp system to devolve into a farcical process in which PPOs, MPNs, and other profiteers can pillage reimbursements owed to the doctors who treat injured workers. The same legislators then turn a blind eye to the misdeeds of insurers and TPAs, which ignore payment regulations with impunity.

Below, see how daisyBill and the DOL demonstrate that workers’ comp e-billing can be a fast, hassle-free way to ensure proper reimbursement for workers’ comp treatment.

Thanks to hard lobbying by some of the above-noted entities, California law allows claims administrators 15 working days (which can amount to around 3 calendar weeks) from receipt of a provider’s e-bill to return payment and the EOR. That’s 15 working days to:

Of course, since California allows PPOs and others to pilfer the revenue intended for doctors, additional time is required for various entities to pass the bill among themselves and determine the best way to siphon money. And make no mistake: it is “money for nothing” since MPNs, PPOs, and the other reimbursement-scarfing hyenas do not provide a single service to injured workers.

Taken with the DOL’s extreme speediness, and the fact that the DOL consistently pays at 100% of fee schedule rates, this raises several important questions about California workers’ comp: 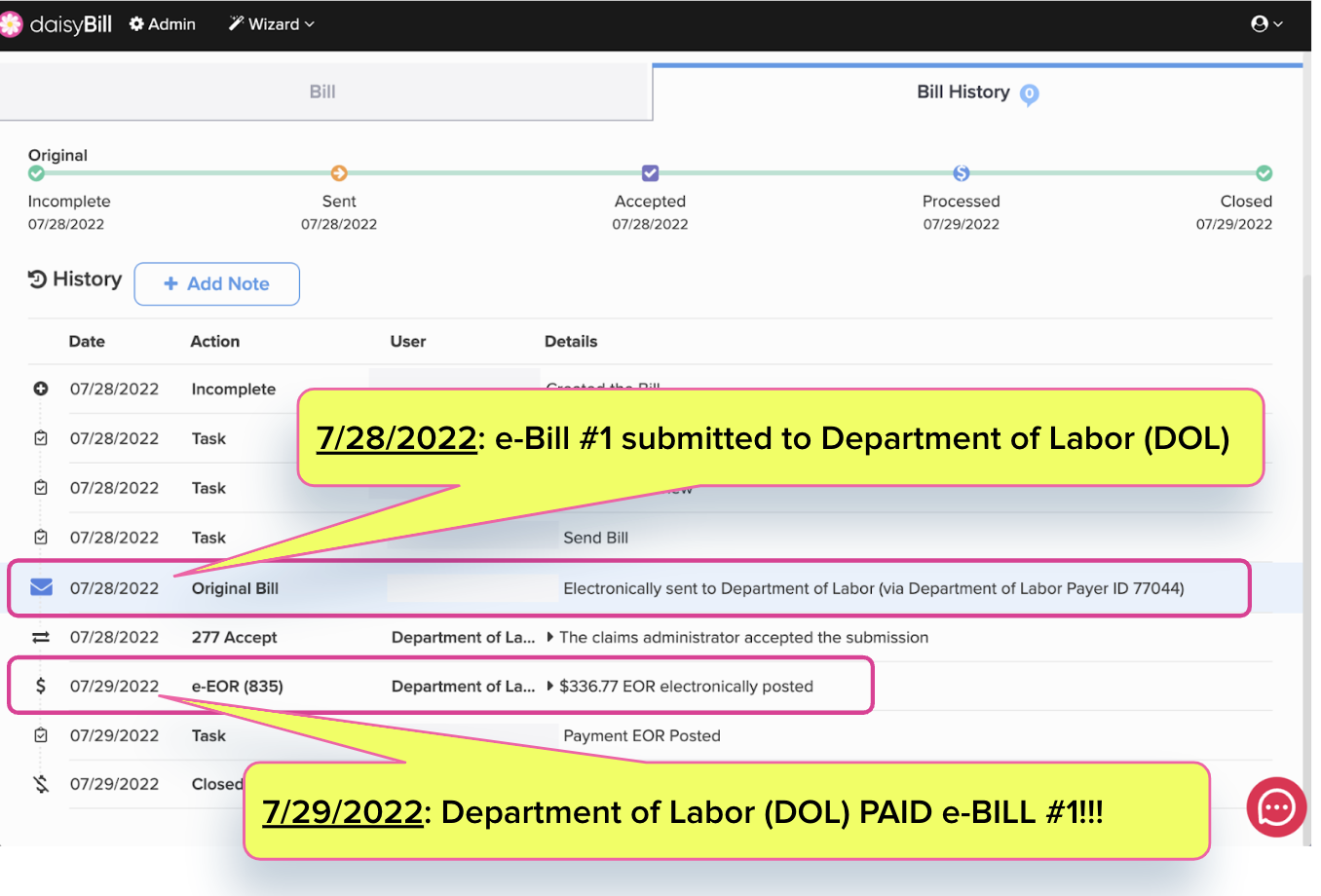 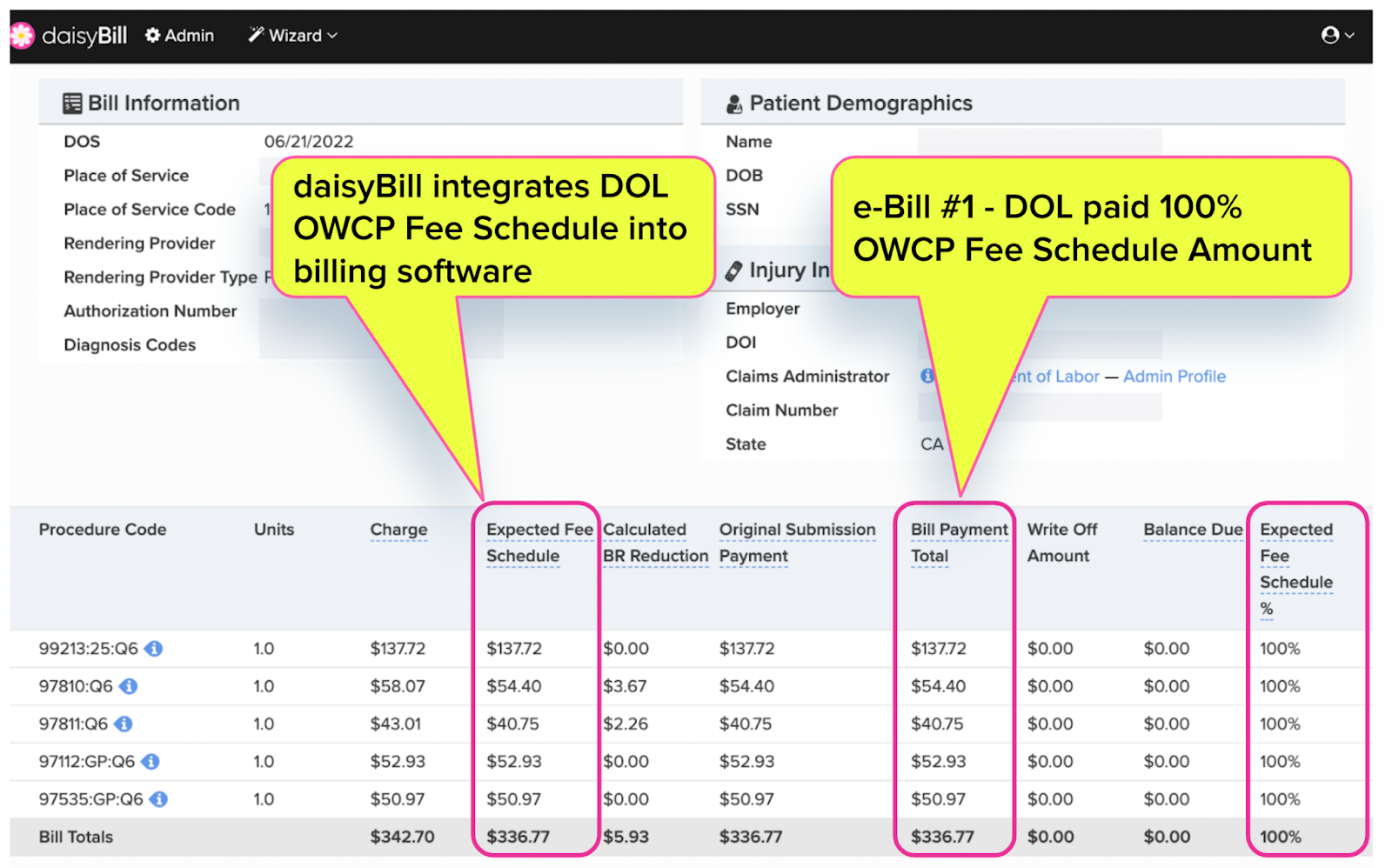 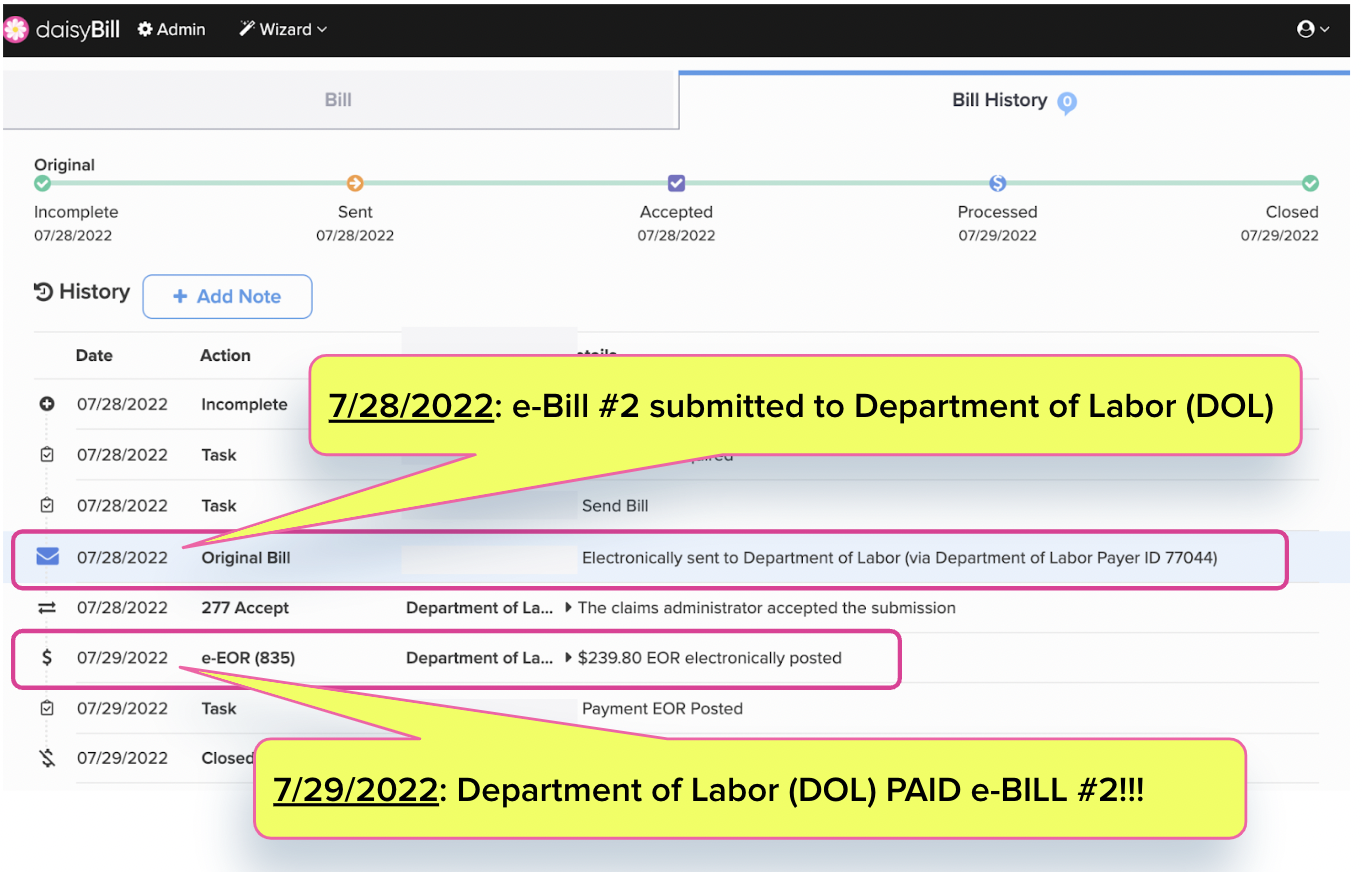 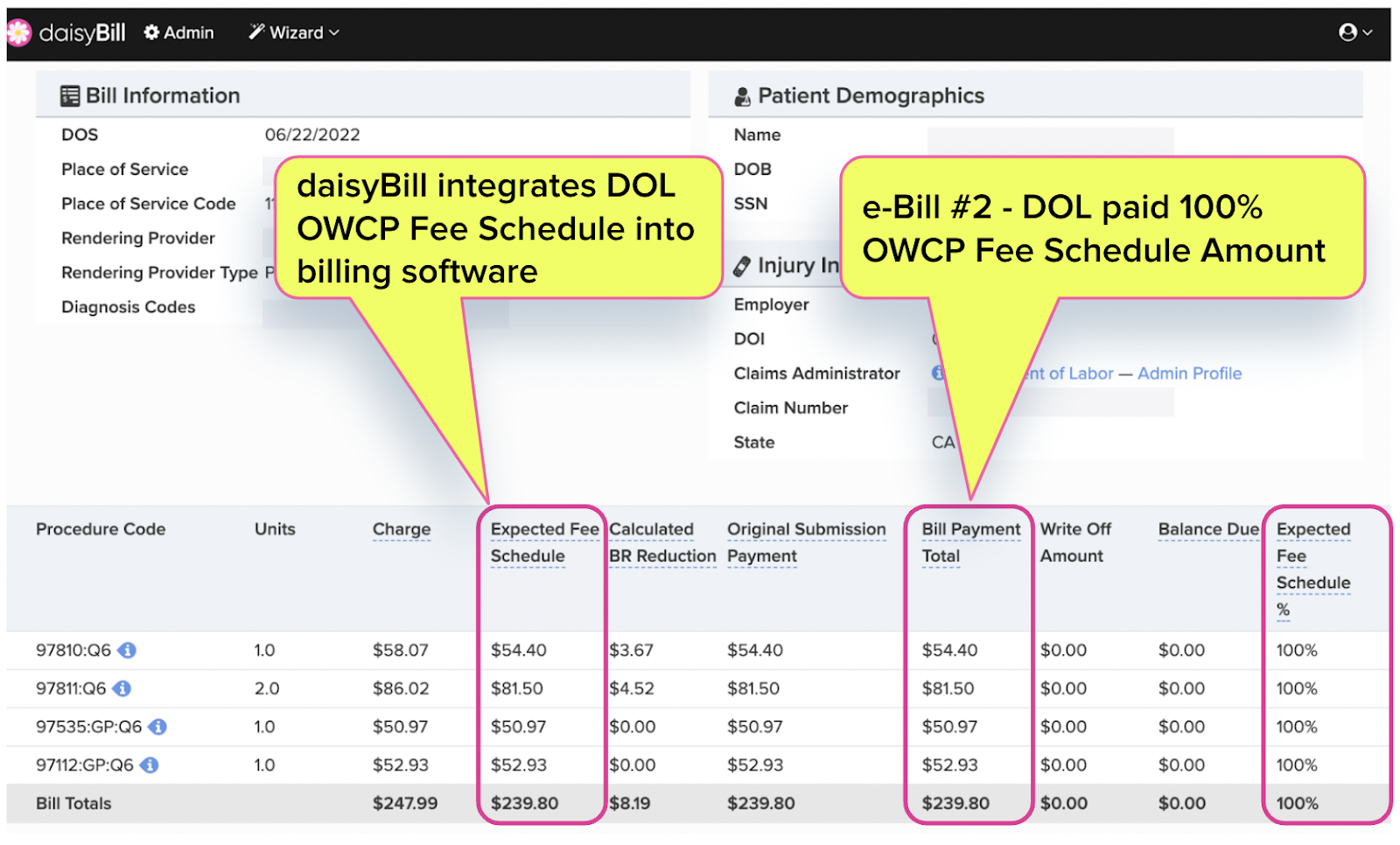 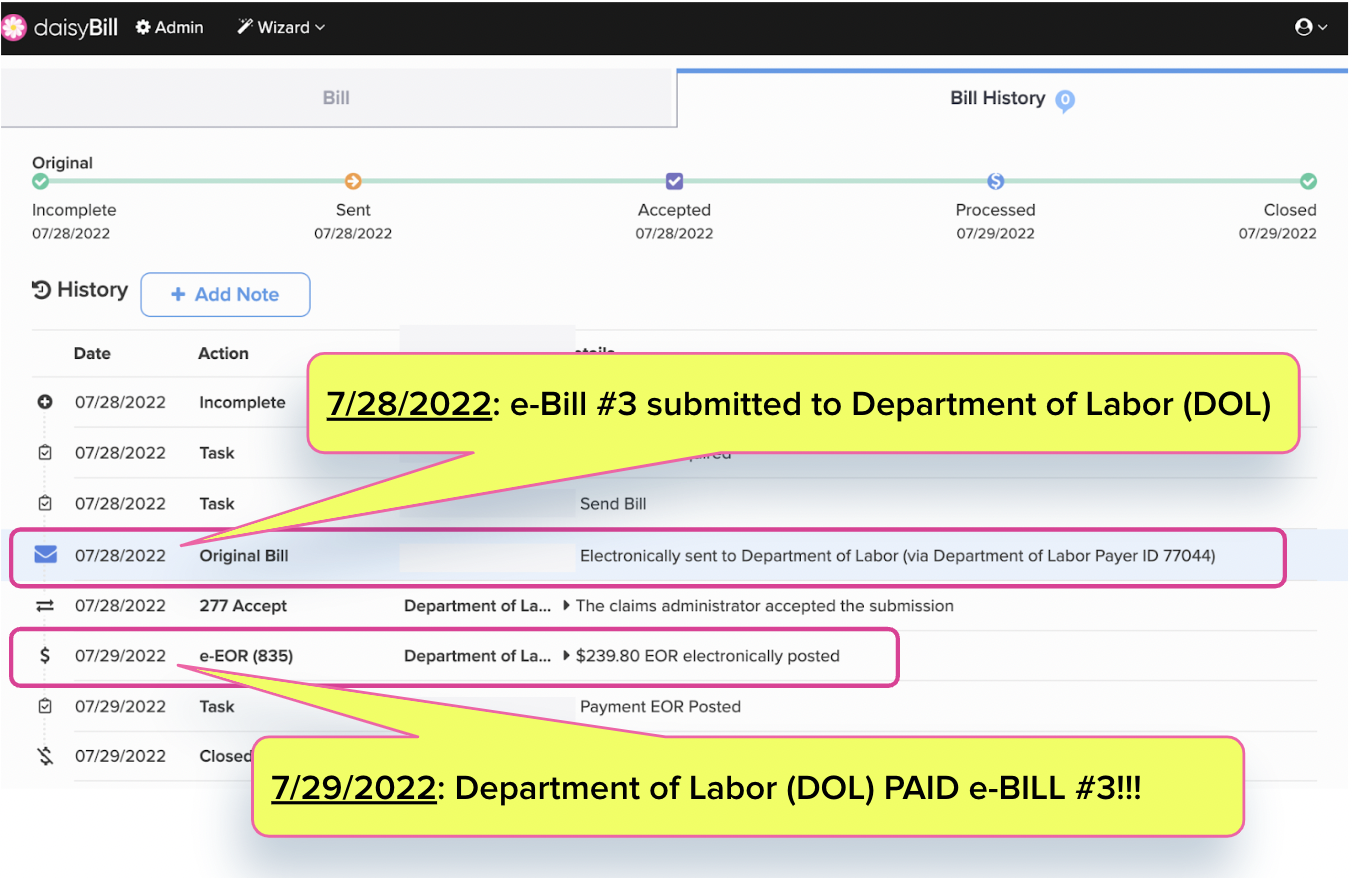 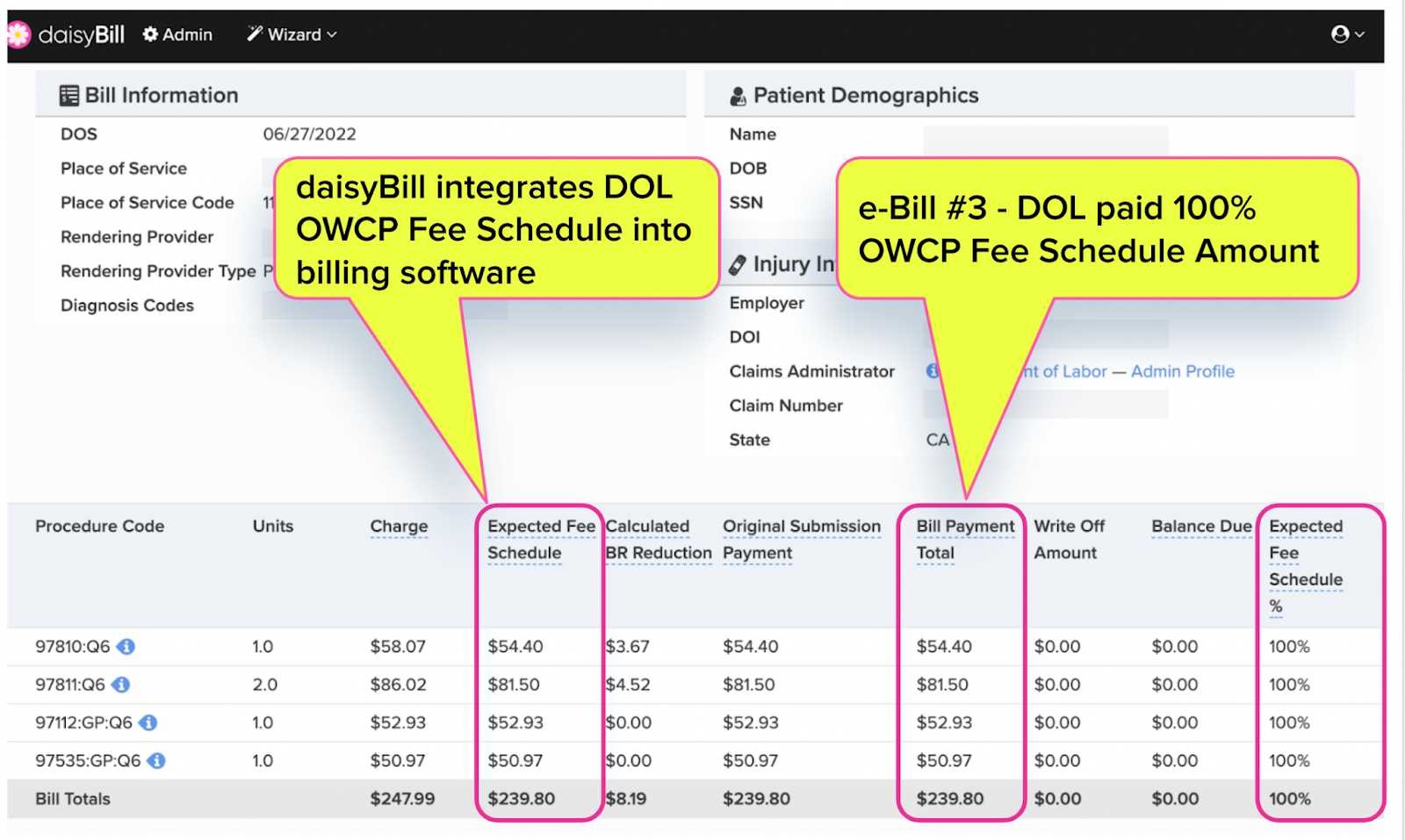 Bottom line: it doesn’t have to be this way, as the DOL makes clear.