As the California Workers’ Compensation Institute (CWCI) peddles paid access to its insurer-derived data and white-tie webinars, daisyBill would like to offer an update on the state of the current Medical-Legal Fee Schedule — based on our publicly available, verifiable, free data from over 144,000 actual Med-Legal bills.

There are no surprises. As the CWCI and assorted payer-friendly bloggers remind us, expenses for Medical-Legal services have (unsurprisingly) risen since the current MLFS debuted on April 1, 2021.

As daisyBill data clearly demonstrates, 29% of the increase in Medical-Legal expense is due to attorneys dumping over 54 MILLION pages of records on evaluators for review — hardly a reason to bemoan the first pay increase for physician evaluators in 15 years.

With a serious streamlining of the formerly convoluted reimbursement calculation system, the updated MLFS was always destined to increase overall Medical-Legal expenses — especially since the last update to the MLFS took place in 2006.

Of course, the increase was much greater than the Division of Workers’ Compensation (DWC) predicted, largely because the DWC could not possibly have known that doctors were reviewing millions of pages of records sent by attorneys to Qualified Medical Evaluators (QMEs) and Agreed Medical Evaluators (AMEs). Even the CWCI acknowledges the large role MLPRR played in the increased payments for Medical-Legal evaluations.

Reimbursement for MLFS evaluation codes ML200, ML201, ML202, and ML203 include payment for what the Division of Workers’ Compensation (DWC) presumably believed were reasonable amounts of records to review for these evaluation codes.

For example, the reimbursement for ML201 (Comprehensive Medical-Legal Evaluation) includes payment for up to 200 pages of record review. Starting with the 201st page, the physician may bill for every page reviewed that exceeds the 200-page limit. Each additional page represents one billable unit of MLPRR, at $3 per unit.

As the data below shows, allowing physicians to bill for record review by the page revealed the staggering amount of records dump-trucked to QMEs and AMEs for each evaluation.

Between April 1, 2021 and June 30, 2022, daisyBill physician evaluators billed over $98 million for MLPRR. This represents over 32 million pages of additional medical records reviewed; that’s 32 million+ pages in excess of the records included with each evaluation code.

For a total bill count of 50,738 where an evaluator reported MLPRR, these providers reviewed 40,605,536 pages of records.

The table below breaks down MLFS charges billed by our clients, including the whopping amount of charges for record review. 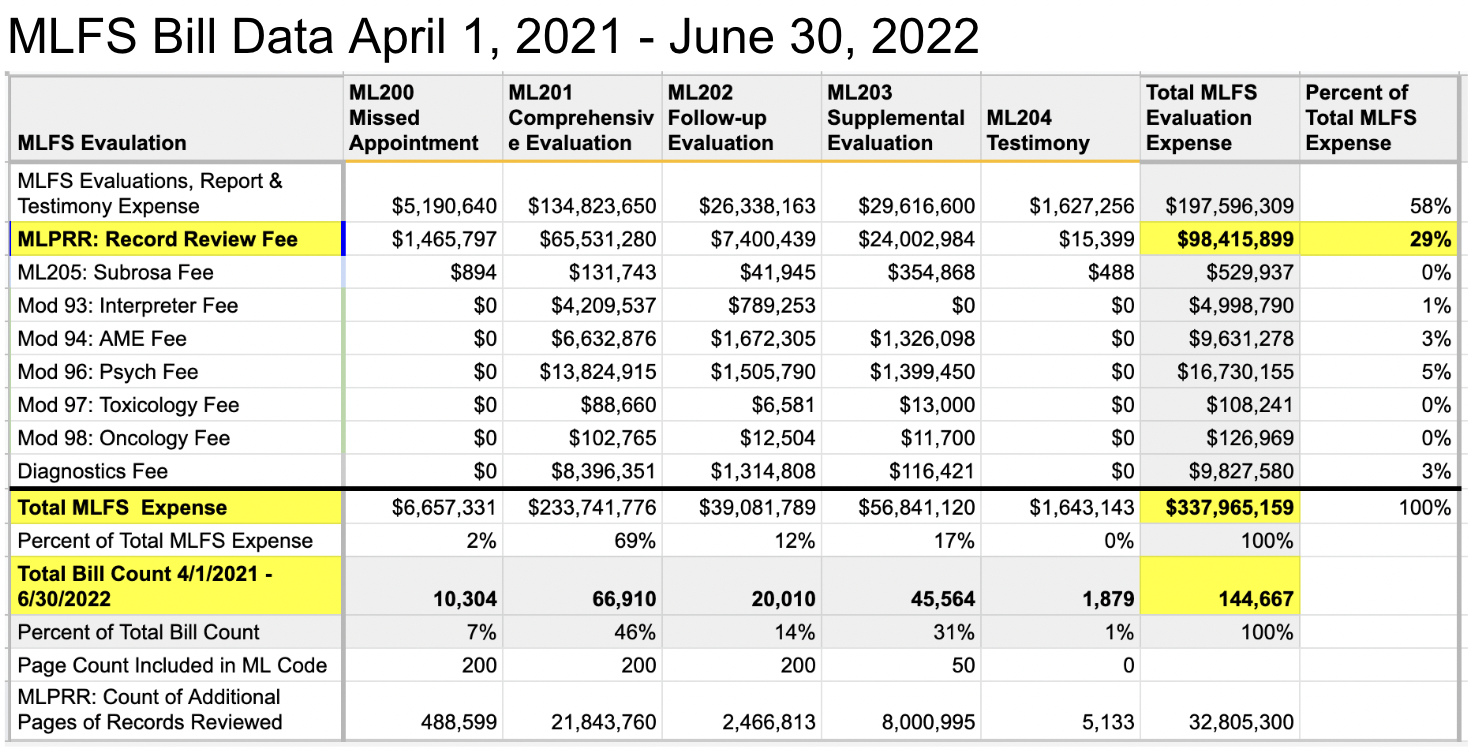 As we’ve stressed repeatedly, physicians are not responsible for the Mt. Whitney-sized piles of records that attorneys send to their offices for these evaluations.

Since the CWCI released its paywalled report on the MLFS, based entirely on data reported by the group’s insurer members (presumably, since there’s really no way to research the data’s origins), there’s been a chorus of grousing* from the corner of the blogosphere devoted to protecting the interests of payers.

As the hype grows, the CWCI is also selling tickets to its upcoming webinar, at $75 a pop, on the alleged MLFS crisis. Alternatively, anyone who’s interested in dissecting the MLFS is free to watch our recent webinar breaking down the new MLFS, as well as our even more recent live Q&A on MLFS billing. Both are free of charge, as daisyBill attempts to help the California workers’ comp community.

We can only guess as to the motivations of a group of insurers and payer-side bloggers making a concerted effort to raise alarm about Medical-Legal expenses, especially given that until April 2021, QMEs hadn’t seen a raise since the last time Nickelback had a hit song. What we can do is offer our own data, without fees, and without any questions regarding its origins.

*Word of the Day - Grousing: Like whining, but in a much more irritating and self-pitying way.

Make Medical-Legal billing a breeze. daisyBill empowers QMEs and AMEs to collect what’s owed in record time. Contact us to learn how we can help your practice.

Jul 27, 2022 3 min read
CA Med-Legal Fees, QMEs Under Attack
A recent study on the current Medical-Legal Fee Schedule (MLFS) has triggered a wave of pearl-clutching by payer advocates. So what has the payer-side pundits groping for the...