As we pointed out in 10 Ways to Fix CA Workers’ Comp (see item #5), it can seem as if payers play a twisted game of IBR Chicken with doctors, reflexively denying bills and Second Review appeals only to change their mind once the doctor requests Independent Bill Review (IBR).

We can’t say whether JT2 Integrated Resources employs that approach. But the third-party administrator (TPA) recently blinked after the doctor requested IBR — then put on a truly embarrassing display in a panicked attempt to avoid an IBR decision (readers, get ready to cringe).

In theory, an IBR ruling in favor of the doctor would require JT2 to pay penalties, interest, and restoration of the $180 IBR filing fee to the doctor. In reality, those payments are “self-executing.” California regulators do not seem to care whether JT2 actually pays what they owe.

Pro tip for the good folks at JT2: don’t work so hard to avoid the consequences of your improper payment denials. In California workers’ comp, consequences for payer misbehavior are mythical things, spoken of but never seen.

The payer strategy is simple, and without cost or consequence: Deny payment → Deny again on Second Review →If the doctor requests IBR, reverse course and pay up.

This IBR Chicken strategy means that the payer owes the doctor no money for treating injured workers unless the doctor is willing to risk $180, the DWC allows IBR, and the doctor prevails at IBR…and even then, the payer can enjoy a good laugh as the doctor waits (and waits and waits) for the payer to “self-execute” the penalties, interest, and $180 filing fee.

To receive payment for a Supplemental Medical-Legal Report (ML106), JT2 forced the evaluator (via DaisyCollect, as the evaluator’s billing agent) to submit three bill submissions as follows:

After the doctor paid $180 to file for IBR, JT2 took the following actions:

In a series of increasingly frantic emails and voicemails, JT2 insisted that the IBR request be withdrawn, since JT2 opted to pay the disputed amount. The provider refused. JT2, strangely, even asked Maximus to drop the “frivolous” case, all because JT2 blinked first.

We consider this a teachable moment. The lesson? DaisyCollect providers will not withdraw IBRs when, rather than paying the provider, claims administrators (frivolously) waste provider time and resources.

Of course, JT2 still owes this doctor penalties, interest, and the $180 IBR filing fee —  not that we expect to actually see these payments, or the DWC to lift a finger in the med-legal doctor’s defense.

Shortly after paying $180 to file for IBR, we received an email and voicemail in which a JT2 representative agreed to pay the disputed amount, and asked DaisyBill to withdraw the IBR request. 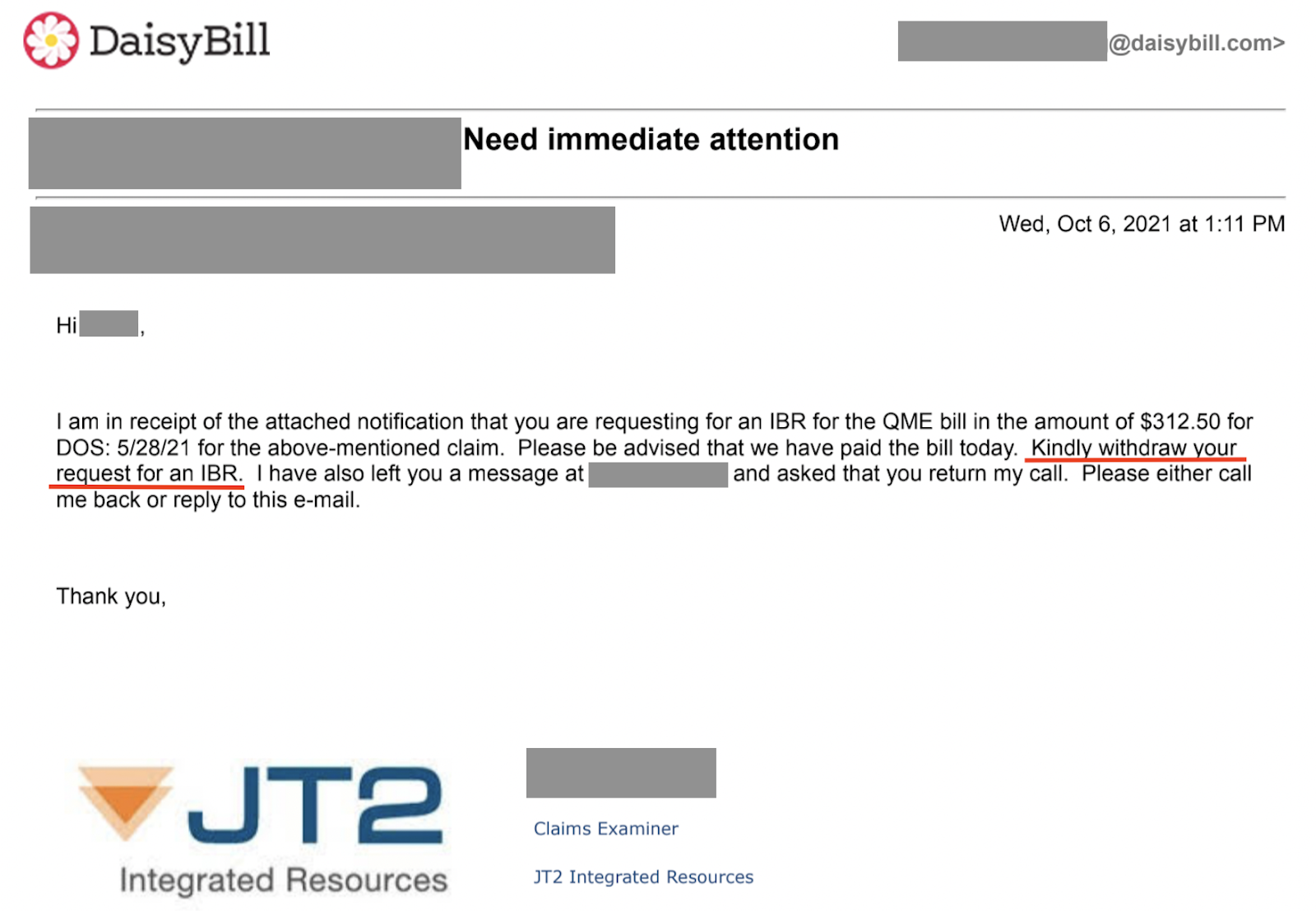 DaisyBill also received a copy of a letter from JT2 to Maximus, in which JT2 presumed to tell Maximus to forget the whole dispute. 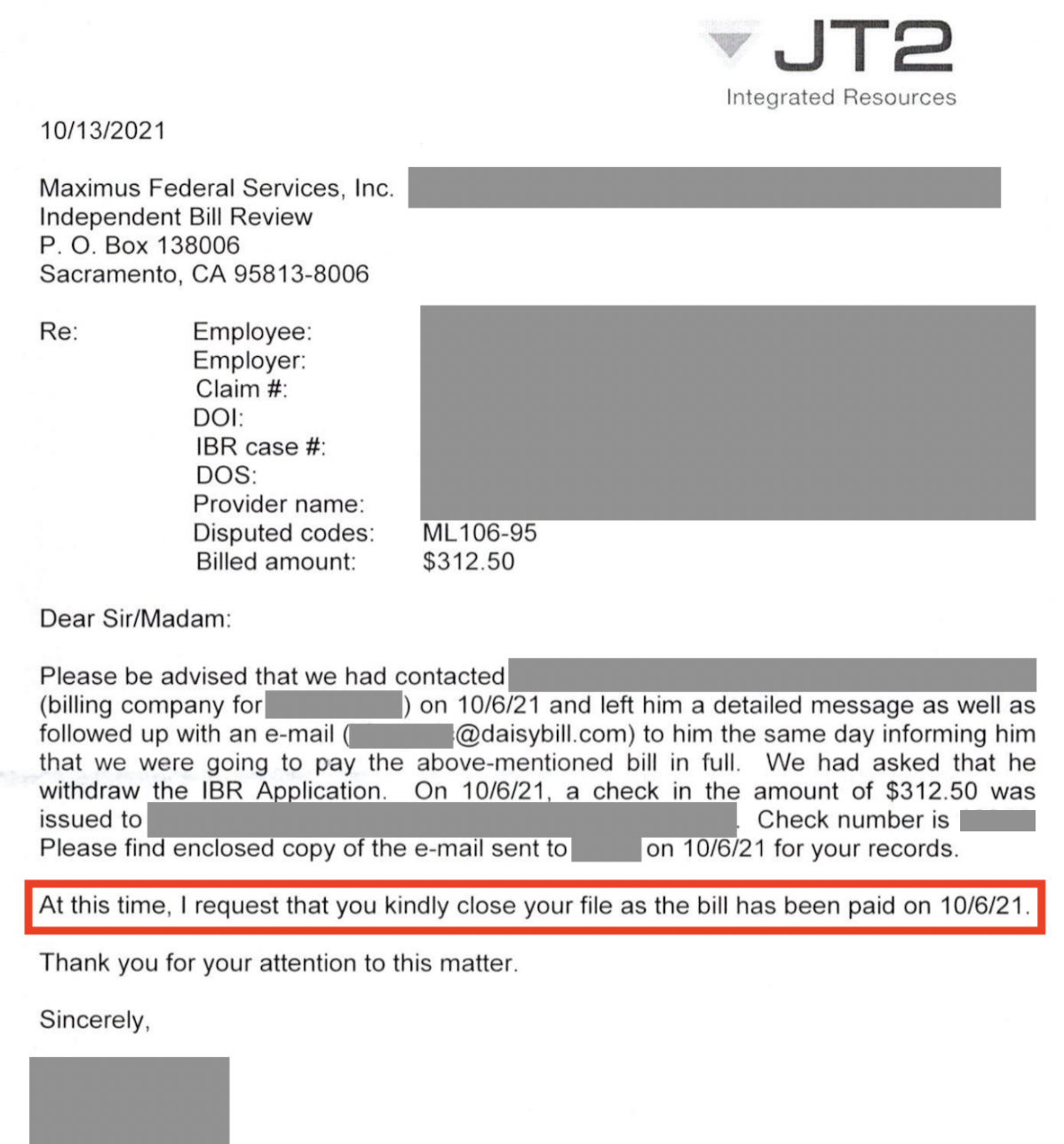 Following JT2’s letter, Maximus reached out to DaisyBill to ask whether the IBR request would be withdrawn. Our agents informed Maximus that IBR would proceed — at which point JT2 escalated its tantrum.

First came a voicemail expressing JT2’s frustration at not being let off the hook. JT2 claimed the IBR request “would be something you would have to withdraw, which [JT2] had requested because that’s wasting [Maximus’] time when it’s already been paid.”

In addition to the voicemail, JT2 followed up by sending Maximus an email, stating (emphasis added):

…I wanted to make sure that Maximus is aware that this [is] now frivolous as the issue had been resolved and all parties were notified timely. I would not be liable for paying Maximus’ review fee given that the disputed amount has been paid in full.

Please respond…and advise why you would not withdraw your IBR referral and would still want to move forward with the IBR process when the matter is resolved.

Except the matter is not “resolved.” By law, JT2 owes this doctor more than just the disputed amount, as detailed above. Fortunately for JT2, California laws are only as consequential as our dormant state agencies make them.