I recently posted answers to questions from DaisyBill’s Request for Authorization (RFA) webinar. Many people found those answers helpful, so I’m answering even more questions today.

Question: If an RFA is approved, can the authorization be revoked?

Answer: Per Labor Code 4610.3, once an employer (or its insurer or URO) authorizes medical treatment, that authorization shall not be rescinded or modified for any reason after the medical treatment has been provided based on the authorization, even if the employer later determines the physician was not eligible to treat (e.g. was not an MPN provider). Under the UR regulations, treatment is "authorized" when the decision to approve the RFA is communicated to the requesting physician.

Question: If the RFA is incomplete, can the adjuster object to or deny the RFA, then request more information?

Answer: If the RFA is incomplete, the claims administrator does not have to pass the RFA along to Utilization Review (UR).

Instead, the claims administrator must return the RFA to the provider:

If not returned within 5 days, the provider has the right to assume that the RFA is complete.

Question: If there is no written authorization, and the treatment was authorized verbally, can a voice recording be proof?

Answer: All verbal requests for authorization must be followed up with a written RFA. Make sure to mark the checkbox on the RFA form that indicates the request is a written confirmation of a prior oral request.

Question: What, if any, are the new/changed RFA requirements for 2016?

Answer: The RFA regulations did not change for 2016, unlike the OMFS. However, correct and specific ICD-10 codes (not the old ICD-9 codes) are required on RFAs.

Additionally, use the correct and current DWC Form RFA, which changed in 2014. 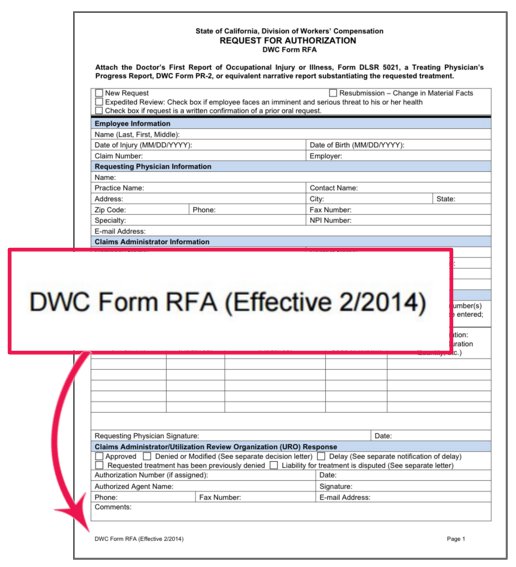 For all the RFA questions and answers, watch the video from DaisyBill’s RFA webinar (it’s free):

When the employer and injured worker are locked in an injury liability dispute, the provider is frequently caught in the crossfire. Often, treatment cannot wait for the long ...