Zurich denied reimbursement for this emergency treatment, even after the provider obtained retrospective authorization.

The events unfolded as follows:

Like so many wasteful disputes, it begs the question: why would any sane doctor treat injured workers? Repeatedly, we find evidence that bearing the administrative costs required to obtain proper reimbursement is financial masochism for California providers.

Zurich’s refusal to reimburse a doctor — even after the doctor received Zurich’s retrospective approval — makes one of the most compelling cases yet for much-needed workers’ comp reform.

When the worker came to the doctor with a lacerated finger, there was no time to fill out a formal RFA form or wait around for Zurich’s Utilization Review (UR). Instead, the doctor simply sutured the bleeding wound, with the expectation of reimbursement for emergency treatment.

It’s a reasonable expectation. The Division of Workers’ Compensation (DWC) website instructs that “Failure to obtain authorization in advance cannot be the basis for denying payment for emergency treatment.” 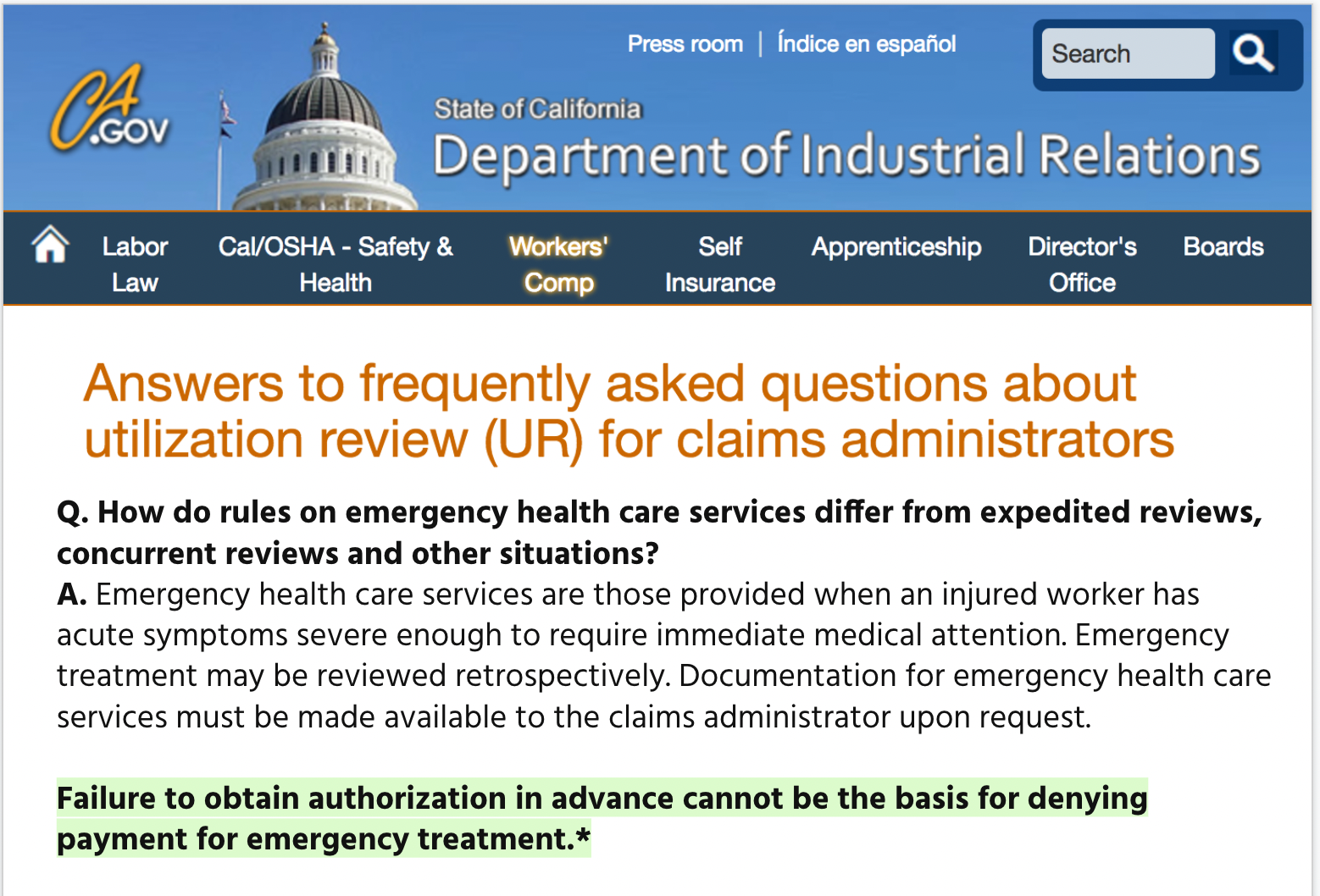 Unfortunately for the provider, Zurich is responsible for this injured worker’s care, and refused to pay the doctor for treating the lacerated finger.

First, Zurich denied the original bill with a string of nonsensical reasons. The Explanation of Review (EOR) from Zurich (below) reads like a Mad Libs of denial codes, seemingly added to the document at random: 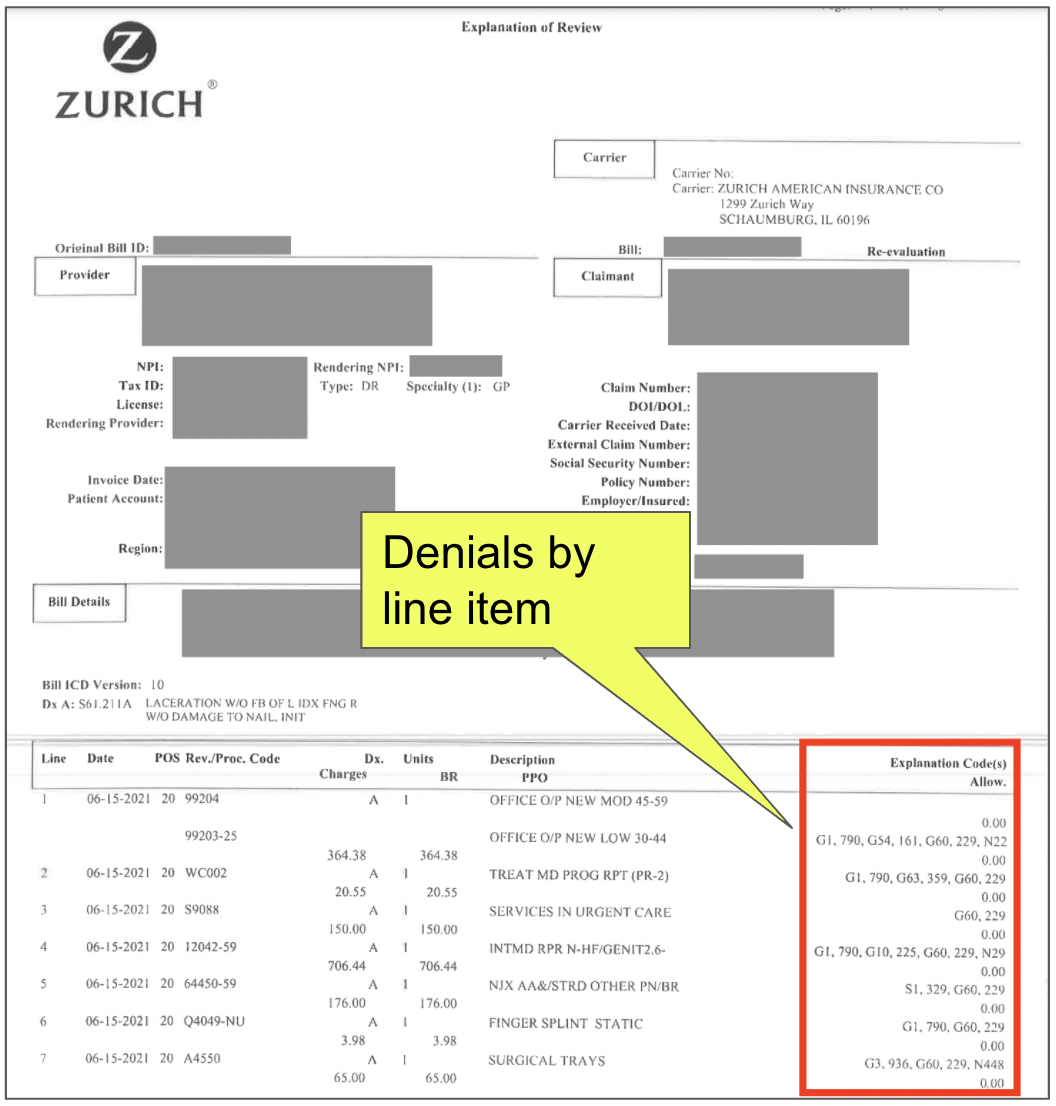 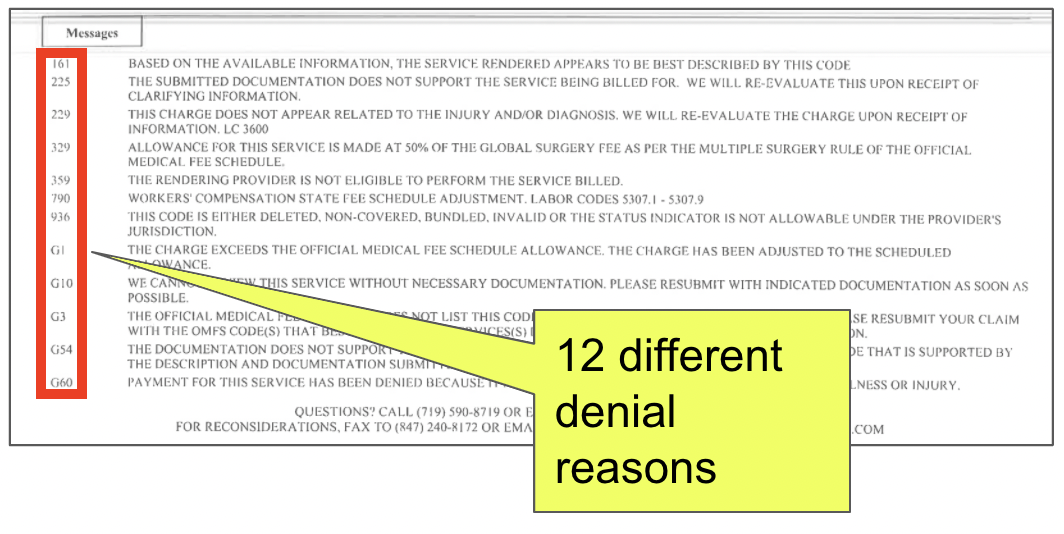 Remember, there are no mystical RFA fairies. Zurich’s denying payment for the emergency treatment meant the provider needed to expend even more administrative costs to submit the retrospective RFA to receive payment for suturing a wound. 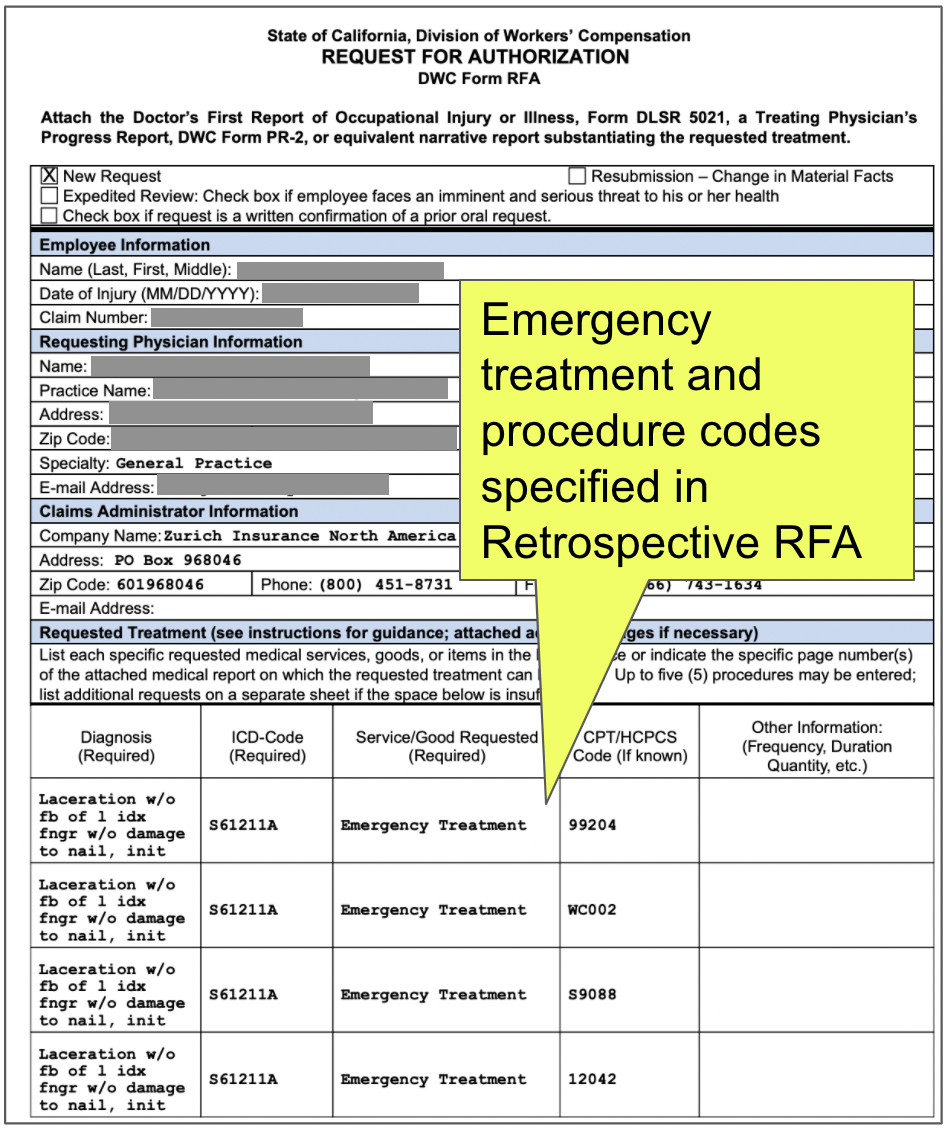 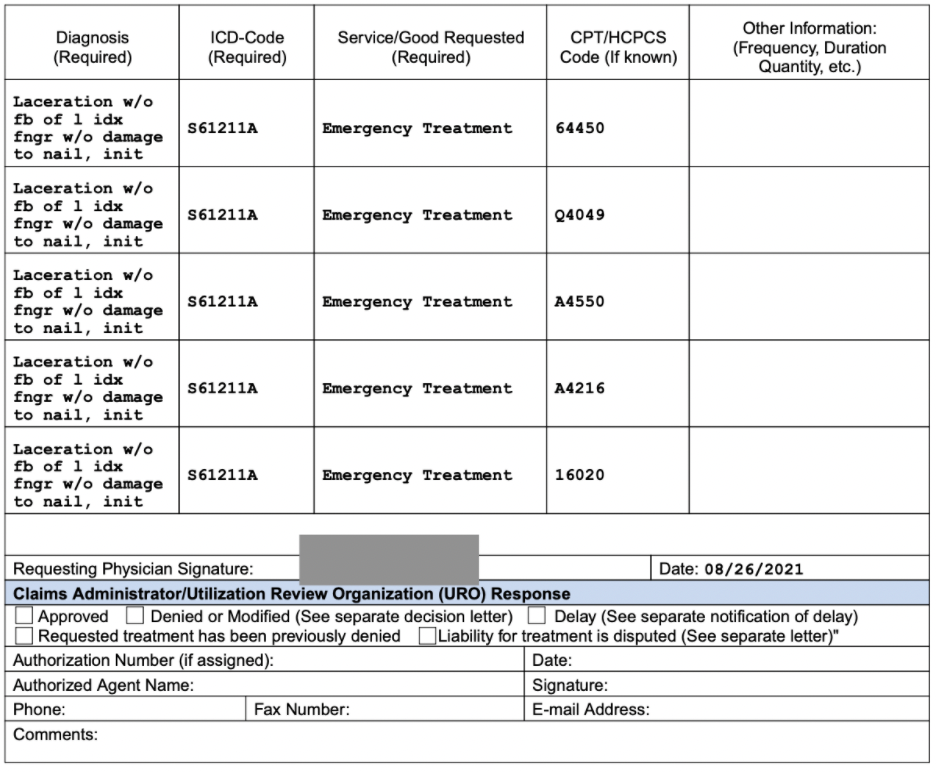 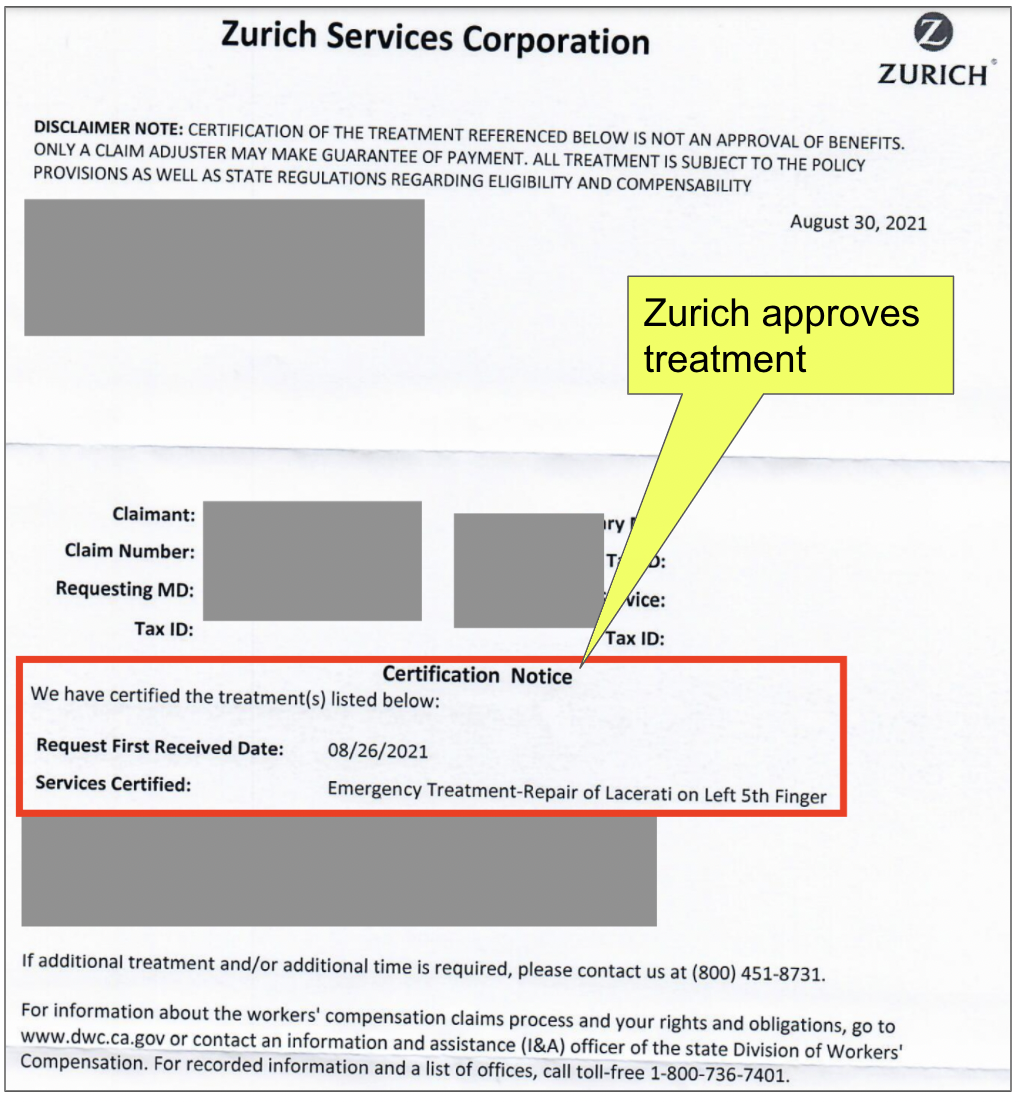 The doctor submitted a Second Review appeal disputing the initial denial of reimbursement. Included with the appeal was the above authorization for the services in question.

Zurich disregarded its own authorization and denied payment a second time, returning a final EOR (below) with another random assortment of denial reasons. This “everything bagel” of reasons not to properly reimburse the doctor included: 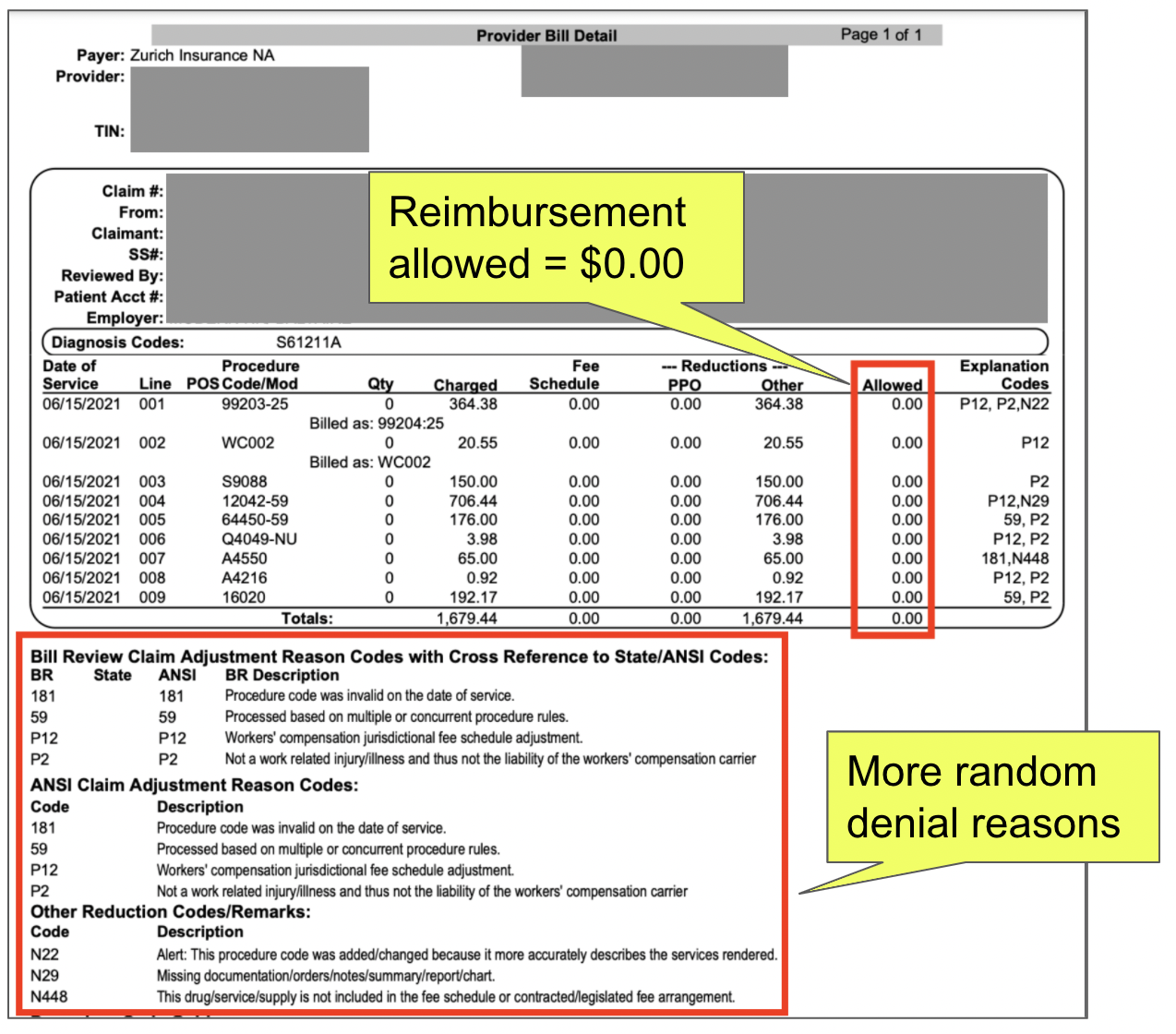 Provider Pays $180 To File For IBR

The second erroneous denial left the doctor with no choice but to request Independent Bill Review (IBR). The provider must pay $180 and file the IBR request within 30 days of receipt of the EOR.

As Zurich demonstrates, treating injured workers emergently is economically risky for providers. And that’s bad for all concerned.

This broken workers’ comp system empowers Zurich to choose whether to reimburse a doctor. In effect, authorization is not a guarantee of payment. When Zurich chooses not to reimburse a doctor, the doctor must embark on an extraordinarily expensive administrative journey to demand payment.

Now, California IBR will have to untangle this dispute.

Hopefully, the DWC will recognize Zurich’s denials for what they are: improper and invalid. Authorization is supposed to guarantee payment. But as we’ve learned before, that’s only true if the powers that be are willing to uphold the rules.

Get paid in full and on time — without the hassle. DaisyBill makes authorization, billing, and appeals quicker, easier, better. Reach out to see how our software and services can help your practice.

As costs skyrocket, physicians flee the system, and injured workers find it harder and harder to find a doctor willing to treat them, California workers’ comp has yet to reck...